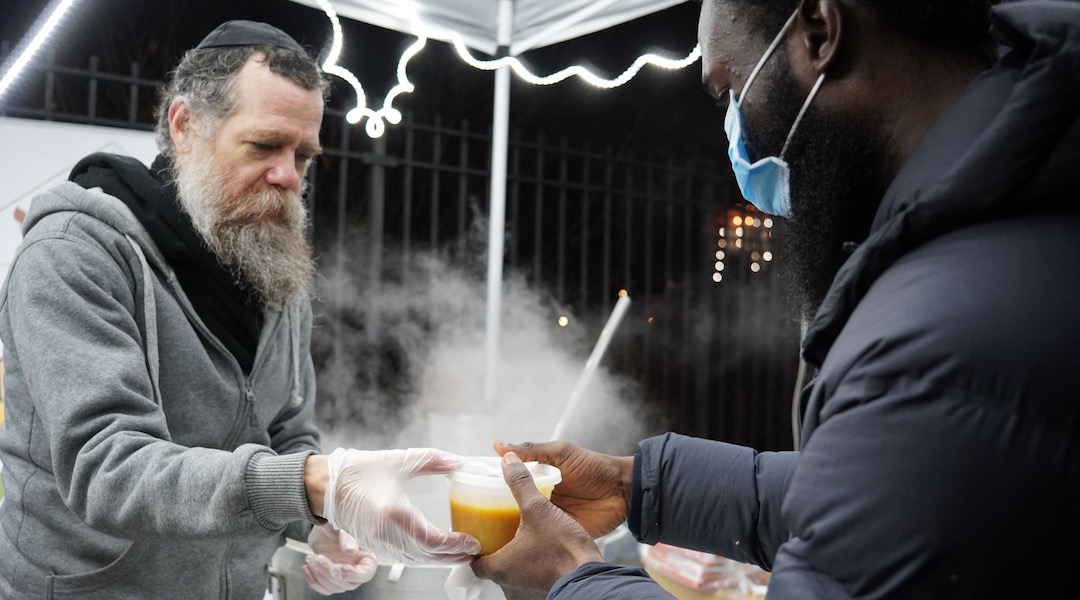 A volunteer, left distributes hot soup at a distribution tent set up by the Masbia kosher pantry network near the scene of a deadly fire in the Bronx, Jan. 10, 2022. The fire, which claimed 19 lives, is the city's deadliest in 30 years. (Courtesy Masbia)
Advertisement

Good morning. We join the city in mourning the lives lost in Sunday’s horrific fire in the Bronx that killed at least 19, including nine children. The fire raged through a 19-story high rise on East 181st Street, which was home to a large African immigrant community.

GRIEF AND ACTION: The Masbia network of kosher soup kitchens set up a relief tent near the scene of the tragedy. Masbia also teamed up with Boro Park Shomrim to purchase and distribute emergency supplies, beverages and snacks. (Masbia is collecting donations here.) (New York Jewish Week)

GIVING BACK: “Judge Judy” Sheindlin has given a $5 million donation to New York Law School to fund full tuition, books and a summer fellowship for 10 women a year. The TV star, her daughter and granddaughter all attended NY Law. (NBC-4)

MINYAN MENSCH: Rep. Jerry Nadler (D-New York), out for a stroll on Saturday afternoon, helped make the minyan at The Carlebach Shul. “With many of our members and leadership out with Covid symptoms,” wrote Shy Yellin, president of the Upper West Side synagogue, Nadler agreed to help complete the 10-person quorum. “A real mensch. Thank you Congressman!” wrote Yellin. (West Side Rag)

REMEMBERING: Bob Saget, the comedian and actor famous for playing a wholesome dad on TV’s “Full House,” but who never lost his flair for raunchy comedy, has died at 65. Last year, the Philadelphia native played the villain Haman in a virtual Purim spiel benefitting COVID relief efforts by the Met Council, the New York-based Jewish charity. “I’m self-loathing, too,” he quipped, although in real life he was proud of his Jewish upbringing and identity. (JTA)

Inbal Sharett-Singer, cantor of Riverdale Temple in the Bronx, is leaving this summer to become the new cantor at Temple Israel in Minneapolis, Minnesota. She succeeds the retiring Cantor Barry Abelson. Born and raised in Israel, Sharett-Singer is a graduate of HUC-JIR’s Debbie Friedman School of Sacred Music.

Join Rachel Beller, cancer nutrition expert for “Good Morning America” and creator of the Rachel Beller Nutrition Masterclass. for a webinar on evidence-based cancer-fighting nutrition information. She’ll discuss simple, delicious recipes and new products to look out for in 2022. Register here for this “Sharsheret in the Kitchen” series, which helps empower those at risk for breast and ovarian cancer to make healthier diet choices. 1:00 p.m.

In the latest episode of “Spiritual Identity and Competitive Sport,” the Union for Reform Judaism welcomes Donna Orender, former president of the Women’s National Basketball Association and the best-selling author of “Wowsdom! the Girl’s Guide to the Positive and the Possible.” Register here. 3:00 p.m.

Yehuda Kurtzer, president of the Shalom Hartman Institute of North America, and James Loeffler, who spent a month chronicling the civil trial against Charlottesville’s white supremacist organizers, will delve into what really happened at the trial, what it portends for the state of antisemitism, and what it means for the future of the Jews in America today at a live taping of the Identity/Crisis podcast. Register here. 7:30 pm.

Photo, top: A volunteer, left, distributes hot soup at a distribution tent set up by the Masbia kosher pantry network near the scene of a deadly fire in the Bronx, Jan. 10, 2022. The fire, which claimed 19 lives, is the city’s deadliest in 30 years. (Courtesy Masbia)