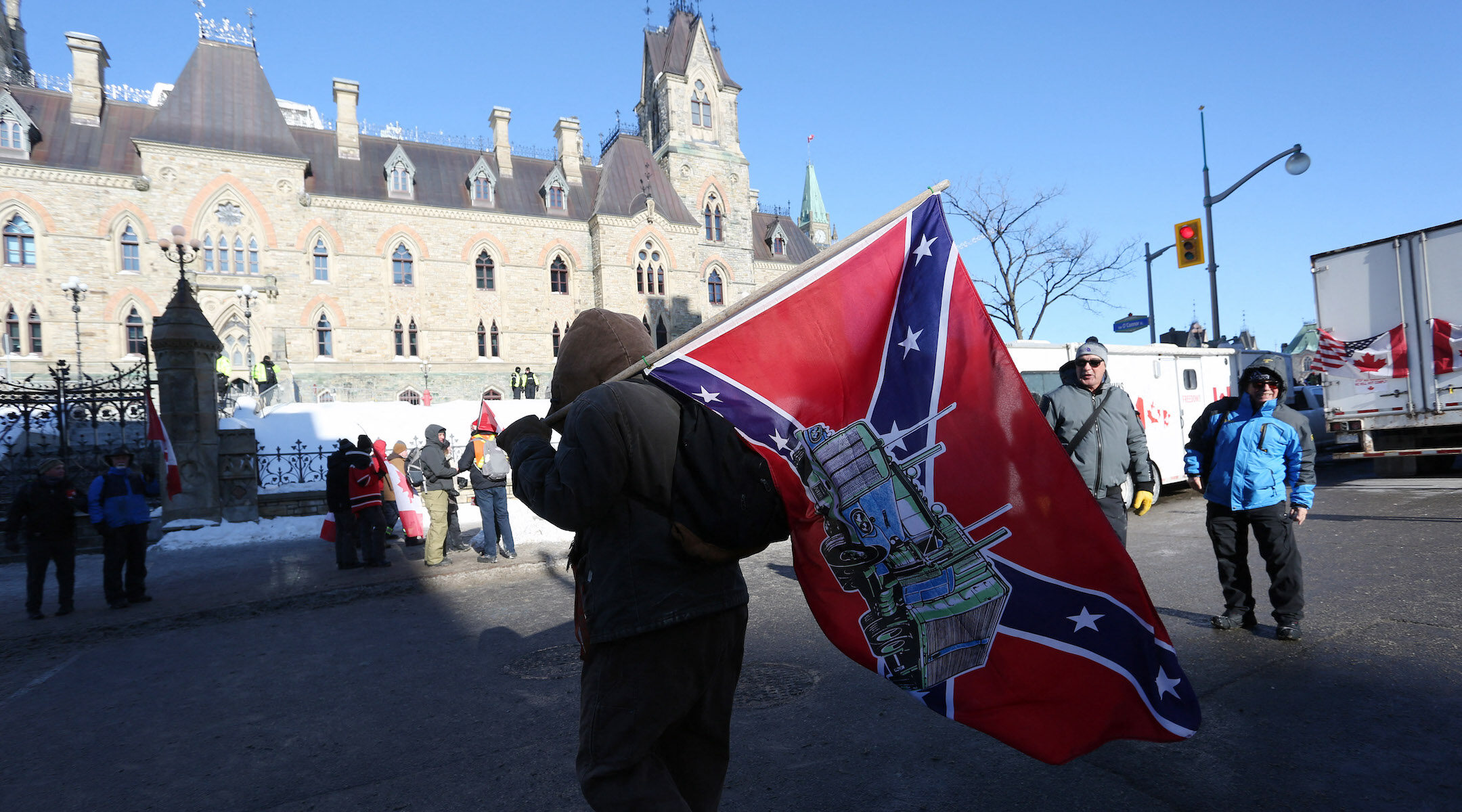 A supporter carries a Confederate flag during the "Freedom Convoy" protests against COVID-19 vaccine mandates and restrictions in front of Canadian parliament in Ottawa, Jan. 29, 2022. (Dave Chan/AFP via Getty Images)
Advertisement

(JTA) — Swastikas and other symbols of hate were on display at the Canadian “Freedom Convoy” protests against vaccination mandates in Ottawa on Saturday that prompted Prime Minister Justin Trudeau to flee to a secret location due to security concerns.

The protests, which were organized by Canadian truckers in response to a vaccination mandate placed on truckers returning to Canada from the United States, attracted thousands to Canada’s capital. A range of groups compared vaccine mandates to fascism and displayed Canadian flags, and sometimes American flags, upside down. Many signs contained profanity-filled messages for Trudeau.

Among the symbols displayed at the protests were swastikas and, in at least one instance, the Confederate flag.

A member of parliament from the Conservative party, Michael Cooper, attended the protests to show his support. While he was being interviewed by the CBC Canadian news channel, a protester with a Canadian flag covered in swastikas walked behind him.

Cooper later released a statement saying he did not know that the symbol was behind him and that if he had, he would have condemned it.

“He or she does not represent the thousands of peaceful protesters who waved Canadian flags and acted responsibly. I stand with them and will continue to fight with them,” he wrote in a statement posted to Twitter.

Journalists who reported on the protests said they were subjected to hate speech and violence themselves. One CBC reporter recalled being called a “slave blooded traitor” after asking for an interview with those organizing the protest.

Former U.S. President Donald Trump gave the Canadian protesters a shoutout at a rally in Texas on Saturday.

“We want those great Canadian truckers to know that we are with them all the way,” Trump said. “They are doing more to defend American freedom than our leaders by far.”

Bruce Heyman, who served as the U.S. Ambassador to Canada from 2014 to 2017, condemned the displays of swastikas and other symbols of hate.

“Both the use of the swastika and the confederate flag are symbols of extreme hate. So very sad to see these symbols anywhere and especially in Canada,” he wrote in a tweet.