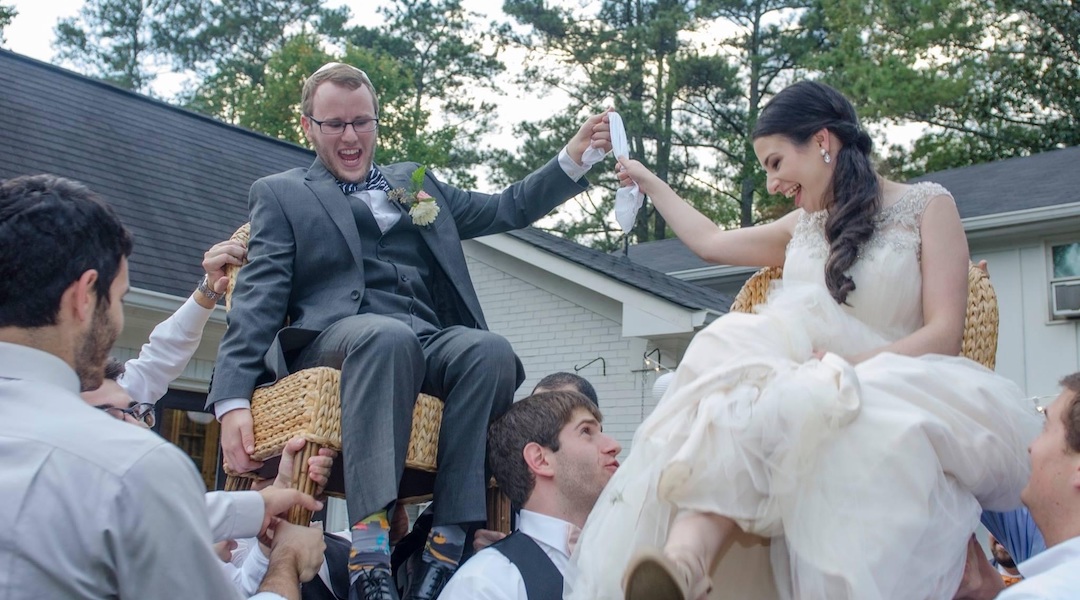 So they disclosed their religion to Holston United Methodist Home for Children and hoped for the best, aiming to foster and then adopt a 3-year-old boy from Florida and raise him a Jew.

But on the day their foster parent training was set to begin, Holston told the Rutan-Rams that it went against the agency’s values to allow a child to be placed in a home that isn’t Christian. Only two years earlier, Tennessee had passed a law allowing the agency to do exactly what it had done. Under this law, adoption agencies could disqualify prospective parents based on their religious faith, as well as same-sex couples.

Proponents said the law is meant to protect the right of adoption agencies to practice their faith. But others pointed out that these agencies receive federal and state funding, and argued that it’s against the law for the government to participate in religious discrimination. Similar laws exist in 10 other states.

On Jan. 19, the Rutan-Rams filed a lawsuit against the Tennessee Department of Children’s Services in hope of overturning the law that allowed the adoption agency to discriminate against them as Jews. Acting with support from Americans United for Separation of Church and State, the Southern Jewish couple have thrust themselves into the middle of a national debate on the meaning of religious liberty.

The Jewish Telegraphic Agency interviewed the Rutan-Rams over Zoom to get to know the Jewish couple beyond what is found in the court filings and media snippets. Their words have been lightly edited for clarity and brevity.

JTA: Can you start by telling me about your Jewish backgrounds?

Elizabeth: I did not come from a very religious household. I grew up in a suburb of Atlanta, and I come from a mixed marriage so there wasn’t much Judaism being practiced. My dad became more religious after I left the house and now he’s all involved in everything.

Gabriel: Me and my dad were the only Jews in our tiny little town of Baldwin in north Georgia. I grew up pretty secular but then ended up going to the American Hebrew Academy for boarding school. I found myself there and went from being more of a cultural Jew to a practicing one through my senior year. I was shomer Shabbos and kept kosher. In college, I was a super Jew. My fraternity nickname was “rabbi.” But then just as I got older I kept steering back towards the cultural side of it.

How did Holston, the adoption agency, know you were Jewish?

Elizabeth: I knew that eventually, somehow, it would come up and I didn’t want it to come up after we had already invested so much time and energy and emotion. So I was just upfront and said “Hey, we’re a Jewish household, Is that going to be a problem?” The woman at Holston said, “I don’t think so. But let me check to make sure.” And in the meantime, we continued the entire process. We started filling out all the paperwork we had registered for the class and everything and then we got the email saying that they wouldn’t help us after all.

Would they have found out you were Jewish if you didn’t volunteer it?

Elizabeth: They would have probably asked something like, “Where do we go to church?” And we were not going to lie about any of it.

How did it feel when you were told you were disqualified for being Jewish?

Elizabeth: I felt hurt and confused. I didn’t know where to go from there. They felt like the child would be better off in a foster home than in our family just because we’re Jewish. That has nothing to do with how well we can be parents. And so it was very insulting.

I was also ashamed that I was so upset because I felt like I had predicted that this would happen and then it happened. I asked myself, Why am I having this reaction? Why wasn’t I prepared? I was shocked at myself for being as upset as I was about it.

What made you suspect that being Jewish might be a problem?

Elizabeth: Just living in the South my entire life and knowing that this was a religious organization. It was a gut feeling.

Gabriel: Growing up in the South, we’ve faced antisemitism our entire lives. [Elizabeth’s] nickname in school was “Jew girl” because she has very characteristic features. When I was in second grade I had some kids on the bus give me a swastika on a sheet of paper. Some people within my social circle, like friends of friends, told me that Hitler didn’t do a good enough job.

It wasn’t so much of a shock that, “Hey, there’s antisemitism in the world.” But the shock was that an agency that’s receiving taxpayer funds is discriminating against us for being Jewish.

Elizabeth: Some people don’t seem to know what Judaism is around here. And it’s very confusing and kind of scary to them: somebody who’s different that they don’t understand.

On the other hand you have several plaintiffs with you on the lawsuit who are not Jewish, and are, in fact, they are pastors and ministers. Do you feel solidarity from non-Jews?

Elizabeth: We have been reached out by so many people, including many of my friends who I was a little hesitant to bring it up with. We have real strong evangelical Christians who are completely in support of us and think that what happened is very wrong. It’s been wonderful.

Have you heard from other couples who are in the same situation?

Elizabeth: Yes, I’ve had some reach out to me on Facebook. One couple was never successful. And so it’s really sad to see that it did stop them from growing their family.

In your case, though, the plan changed but you are becoming parents. You took a different route and signed up to be foster parents for local youth and now you are in the process of adopting a 14-year-old girl. Tell me how that happened.

Gabriel: On our first day of being eligible as foster parents, they called us up and said, “We have a 14-year-old girl. Would you be willing to take her temporarily for the night?” We said, “Yeah, absolutely.” She stayed with us and we got along and kept her for a few more nights. She just meshes well with how we go about our day-to-day lives and we said, we’d love to be her permanent placement.

Elizabeth: So that’s how it went from seeking babies to getting a 14-year-old. We had a nursery set up in our house. And that’s where she slept the first night.

And you also went from raising a kid as a Jew to introducing a teenager to Judaism.

Elizabeth: We went all gung ho on Hanukkah, which, you know, when you’re comparing it to Christmas, it’s hard.

It’s also been fun introducing her to a bunch of new foods. And she’s a foodie. She likes a lot of them. She kind of remembers which holiday by which food it has. She remembers Yom Kippur because she’ll say, “Oh, that’s the one Gabriel was angry all day.”

And she also got Christmas presents. She’s said she wants an Easter basket. We’re still going to include her in those things. We are all including each other.

Do we know what ended up happening with that boy in Florida?

Elizabeth: He’s no longer on the site, so I’m assuming he was adopted out.