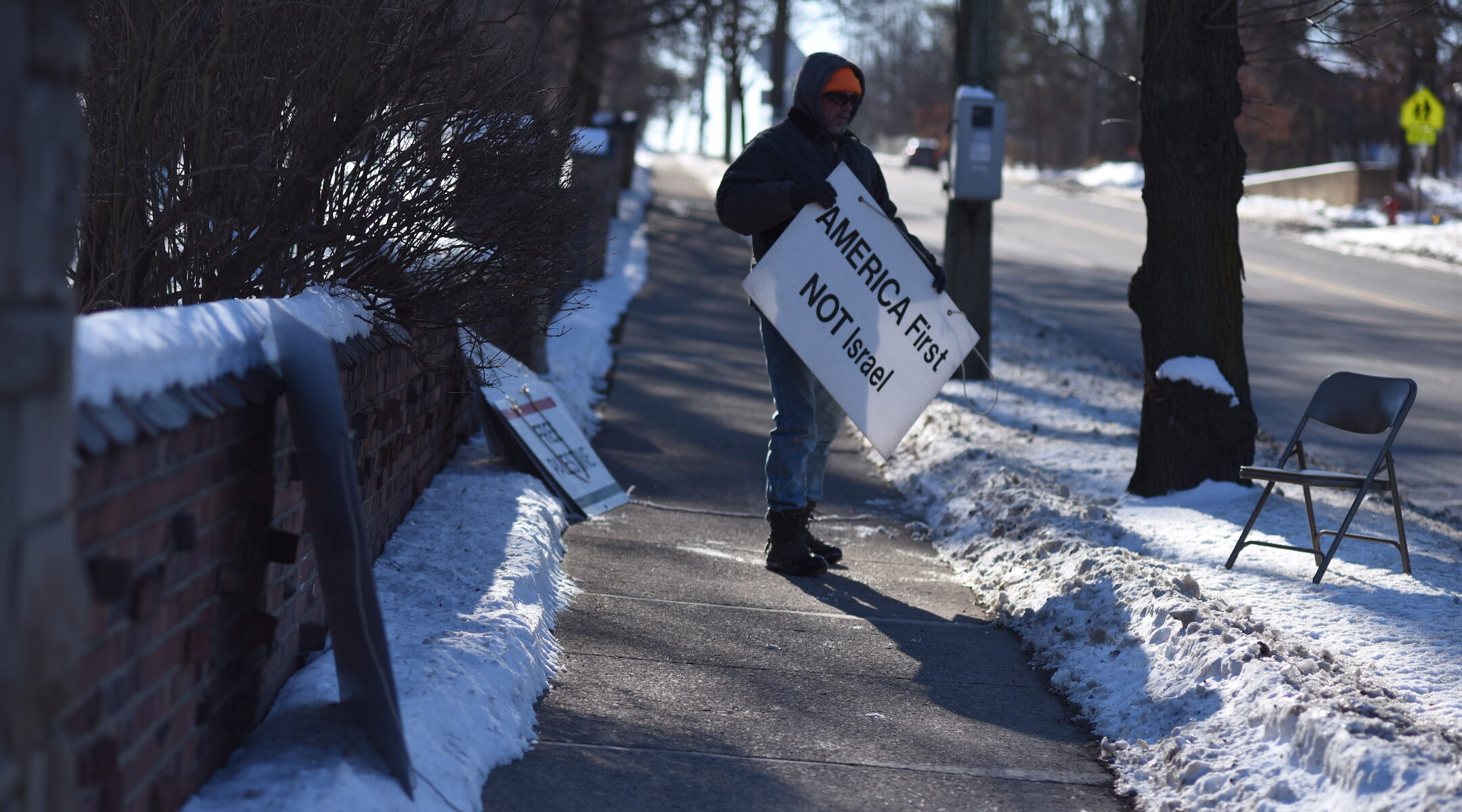 ANN ARBOR, Michigan (JTA) – In the latest twist in the long-running legal saga over a small group of protesters who have gathered weekly outside a Michigan synagogue for the past 18 years, a judge has ruled that Jewish worshippers who lost a lawsuit against the protesters must pay them more than $150,000 in legal fees.

U.S. District Court Judge Victoria Roberts ruled on Jan. 25 that the two plaintiffs — including one who is a Holocaust survivor — and their lead attorney who had sued the group of five protesters in 2019 had filed a frivolous lawsuit against “peaceful protesters.” Therefore, Roberts ruled, the defendants were entitled to compensation to cover the cost of their legal defense.

It is not unusual for courts to order the losing side of a lawsuit to pay their opponent’s attorney fees, although the ruling is less common in civil rights suits.

One week before the attorney-fee ruling, Marc Susselman, the attorney who represented one of the two plaintiffs in the lawsuit, had appealed the lawsuit’s dismissal to the U.S. Supreme Court, calling the ruling “a reversible error” and disputing the court’s claim that the lawsuit was frivolous.

“I’m hoping they’ll grant the petition and recognize that antisemitic speech in front of a house of worship for 18 years is not protected by the First Amendment,” Susselman told the Jewish Telegraphic Agency Tuesday. His plaintiff’s case, he said, rested on the idea that, outside a house of worship, “you can’t mingle hate speech with speech that is protected.”

Susselman filed his appeal the same week that the Ann Arbor City Council formally voted for the first time to condemn the ongoing protests as antisemitic. Members of the protest group display signs with slogans such as “Jewish Power Corrupts” and “No More Holocaust Movies.” A previous council resolution, in 2004, had condemned the protests but stopped short of calling them antisemitic.

Susselman said the council’s ruling was “too little, too late,” and had no legal impact. The council has failed to enforce a local sign ordinance that would have affected the protesters’ ability to demonstrate across the street from the synagogue, he said.

The leader of the protests, Henry Herskovitz, said Roberts’ ruling was a vindication of his efforts.

“I’m very happy for our legal team who spent many long and tedious hours defending our First Amendment rights on Saturday mornings,” Herskovitz, the primary defendant out of five total named parties in the lawsuit, told JTA in an email.

“I am looking forward to the case proceeding to the Supreme Court, as we have acted within our right to peacefully assemble, and have nothing to fear from a just court,” Herskovitz said. “We have never impeded a Jewish congregant’s entry to Beth Israel Congregation, nor blocked any vehicle from entering the parking lot adjacent to the synagogue. The general public is our target audience, not the congregants themselves.”

Marvin Gerber and Miriam Brysk — an 87-year-old Polish-born survivor of the Lida ghetto who today is an author, scientific researcher, visual artist and public speaker about the Holocaust — sued the protesters in 2019, alleging that they were targeting Jews at their place of worship, causing emotional distress and violating congregants’ First Amendment rights to safely practice their religion.

They sought an injunction against the protesters to place “reasonable time, place and manner restrictions” on their activities; the lawsuit also named the city and its mayor, Christopher Taylor, alleging that, by allowing the protesters to continue unabated, they had failed to perform their duties to the public.

The Lawfare Project, a New York-based firm that focuses on Jewish and pro-Israel issues, joined the plaintiffs as co-counsel, while the Michigan chapter of the American Civil Liberties Union filed a brief on the side of the protesters.

Over the course of the lawsuit, Gerber dropped Susselman as his attorney — “because I lost,” Susselman told JTA. The attorney, who said he had been representing Gerber pro bono, hinted that he may take further action against his former client: “A client can fire an attorney at any time. And I accept that’s true. But if they don’t fire them for good reason, like attorney malpractice or missed deadlines… then there are consequences. Gerber has the right to fire me, but not the way he did it.”

After dropping Susselman, Gerber and his new attorney filed their own appeal in November for a stay in the ruling’s mandate to the U.S. Supreme Court, where Justice Brett Kavanaugh recently granted them until April 1 to file a formal petition.

Congregation Beth Israel itself is not a party in the lawsuit. Its rabbi, Nadav Caine, told JTA in January that the synagogue’s decision not to join the suit “was partly a statement about its legal merits.”