Jewish activist and IfNotNow co-founder is on a ‘Jeopardy!’ winning streak 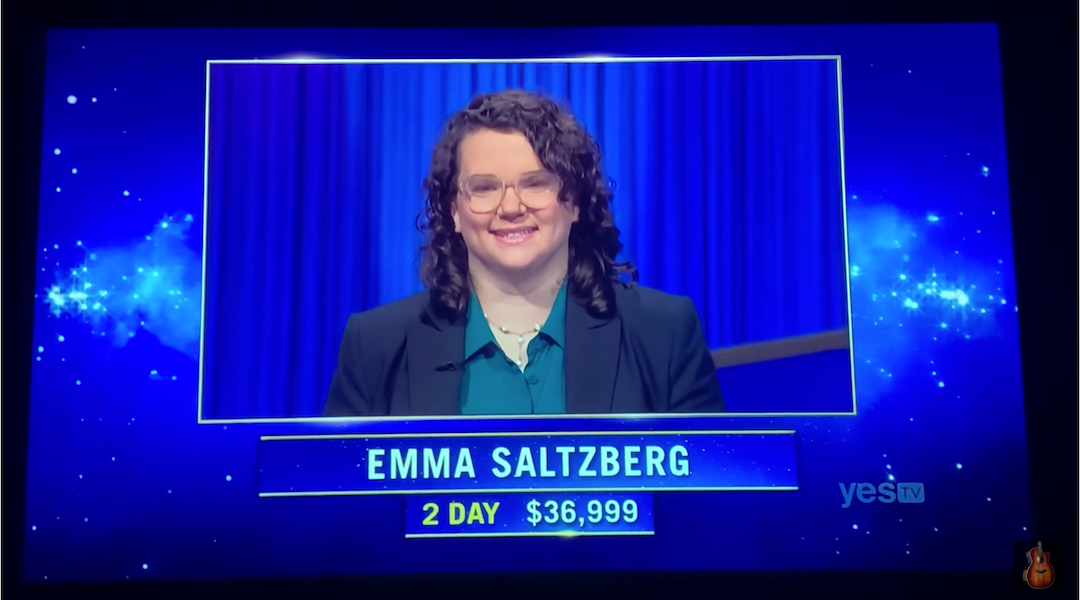 Emma Saltzberg has won on three episodes of 'Jeopardy!' in a row. (Screenshot from YouTube)
Advertisement

(JTA) — Activists on the Jewish left celebrated over the weekend as Emma Saltzberg, a Jewish activist who helped co-found the Jewish anti-occupation group IfNotNow, extended a “Jeopardy!” winning streak that has some comparing her to the game show’s most successful contestants.

Saltzberg has taken the lead for three episodes in a row and currently has a total of $54,199 in prize money. Saltzberg, a consultant who lives in Brooklyn, is a senior fellow at Data for Progress, a progressive think tank, according to her Twitter bio.

We’re so proud of @EmmaSaltzberg, one of our movement co-founders, who is officially a two-time winner of @Jeopardy! Some good news in these dark times.

The entire Jewish left will be tuning in tonight as she goes for win number 3️⃣! pic.twitter.com/uFYPfN60Kd

Jews for Racial & Economic Justice, a social justice organization based in Brooklyn, even broke with its usual policy of refraining from posting to social media on Shabbat to celebrate Saltzberg.

If watching @Jeopardy is in your Shabbat practice 😁 then you saw JFREJ member @EmmaSaltzberg win her 3rd night in a row tonight! We don’t usually tweet on Shabbat but we are so damn proud & had to get in on all the Jewish Left twitter love.

The left-wing magazine Jewish Currents also celebrated Saltzberg, who has contributed to the magazine.

Huge mazel tov and so much love to JC contributor and friend @EmmaSaltzberg as she heads into DAY THREE of her Jeopardy winning streak! Tune in tonight!https://t.co/bqyqcitijy

Saltzberg caught the eye of more than just Jewish viewers. A five-time winner on the show, Tyler Rhode, tweeted about her Friday evening, “The #Jeopardy champ is legit. One to watch.

.” The robust fan community responded with agreement, some offering analyses of Saltzberg performance at the buzzer and correct-answer ratio that they said put her in the same league as Amy Schneider, the woman who recently won 40 consecutive games.

Saltzberg’s streak — which included coming up with the Yiddish word “bupkis” last week — comes amid a string of notable Jewish appearances on the beloved game show. In December, Rabbi Angela Buchdahl appeared as a visual clue to help contestants come up with the question, “What is rabbi?”

Earlier that month, the show devoted an entire category to Yiddish theater, and cholent, the slow-cooked Shabbat stew, was featured in a clue near the beginning of the season. Mayim Bialik, the Jewish actor who is sharing hosting duties while the show seeks a permanent replacement for longtime host Alex Trebek, explained the traditional Jewish food to the stumped contestants. This week, Bialik will host the show’s college tournament, which is airing in addition to the regular episodes.

Saltzberg will face off Monday night against a nursing student from North Carolina and a social worker from Louisiana.