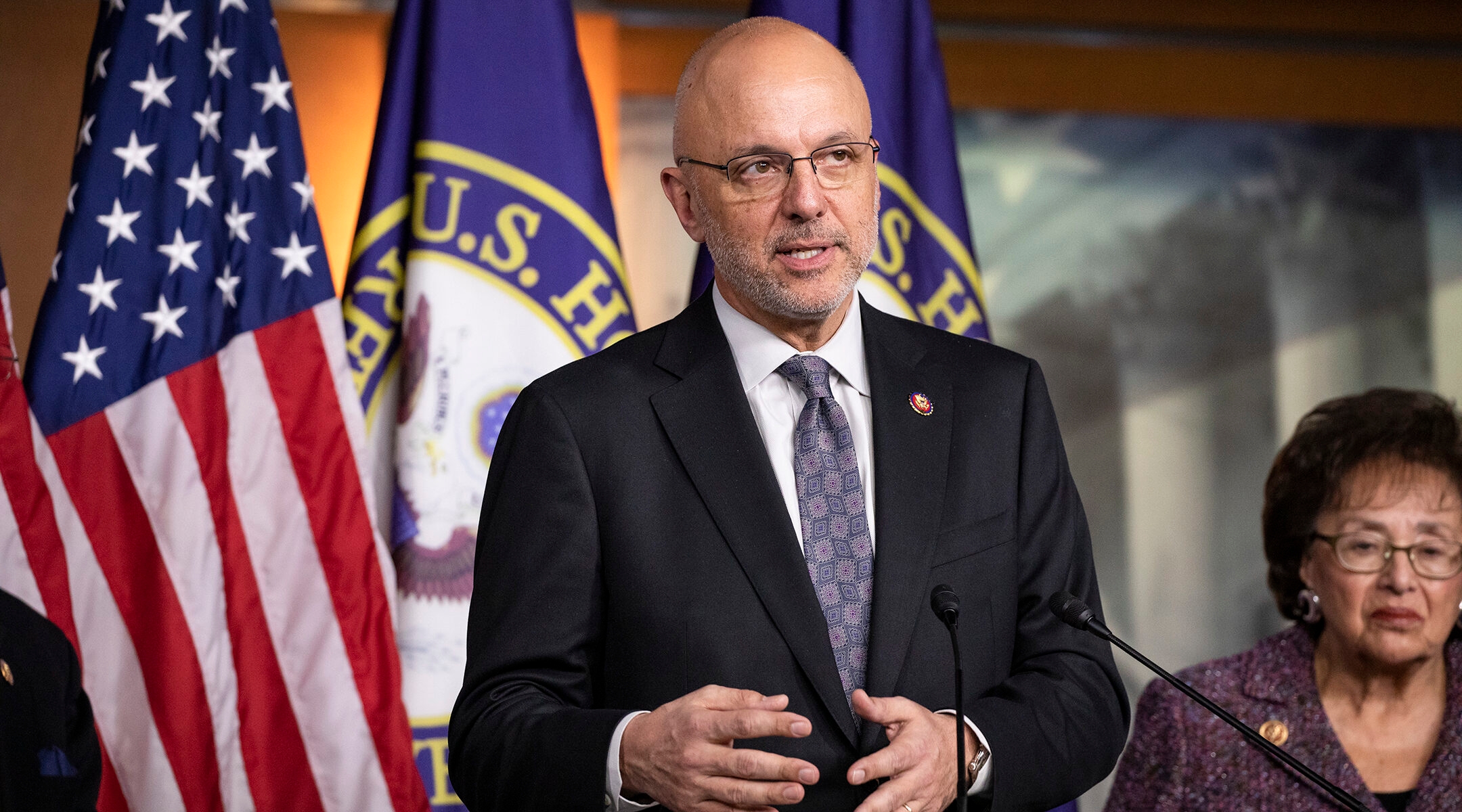 Rep. Ted Deutch speaks about his experiences during a trip to Israel and Auschwitz-Birkenau as part of a bipartisan delegation in Washington, DC., Jan. 28, 2020. (Samuel Corum/Getty Images)
Advertisement

(JTA) — Rep. Ted Deutch, one of Congress’ most outspoken members on Jewish issues for over a decade, is leaving politics to become the next CEO of the American Jewish Committee, the advocacy group announced Monday.

Deutch chairs the House’s Ethics Committee and holds senior spots on both the prestigious Foreign Affairs and Judiciary committees. He has been a leading pro-Israel voice in the Democratic Party, particularly in recent years as progressive newcomers have been historically outspoken in their criticism of the Jewish state.

At AJC he will succeed David Harris, who has led the organization since 1990. Harris is best known for his work in helping Jews leave the former Soviet Union and for combating anti-Israel rhetoric at the United Nations. Deutch will take over on Oct. 1.

In a statement announcing Deutch’s appointment, AJC President Harriet P. Schleifer said that “Ted’s deep and lifelong commitment to the Jewish community, Israel, and to the protection of democratic values is obvious to all who know him.”

After the Florida Holocaust Museum in Tampa was hit with swastika graffiti last year, Deutch partially blamed progressive colleagues who compare Israel to apartheid South Africa for an uptick in antisemitism across the United States.

“When we have colleagues whose position is ‘Palestine from the river to the sea,’ which includes no place for a Jewish state, and when our colleagues…wrongly and falsely describe Israel as an apartheid state, there is a context for all of this,” Deutch said at a virtual event with fellow lawmakers.

He was also sharply critical of former President Donald Trump and other Republicans; he was particularly critical of Trump’s repeated insinuations that Jews who vote for Democrats are disloyal.

Deutch was also heavily involved in House Middle East policy, taking several trips to Israel as one of a few Middle East specialists on the House’s foreign affairs committee. He was one of only a handful of Congressional Democrats to oppose the Iran nuclear deal before it was signed, but he disagreed with Trump’s decision to pull the United States out of the agreement in 2017.

In the wake of the Parkland school shooting, which occurred in his district, Deutch joined the chorus of local and national Democrats who called for gun reform legislation. His two daughters launched a project that involved selling hamantaschen to raise money for groups that lobby for stricter gun laws.

Deutch, 55, is now the 31st Democrat retiring from Congress ahead of this fall’s midterm elections, in what pollsters are predicting will be a big year for Republicans. His district’s boundaries are in flux like many others across the country ahead of the midterms; there is a chance that if he campaigned in the fall, he would have had to face fellow Jewish Democrat Lois Frankel, who represents the 21st District, in a primary.

He said his work in Congress led him to the position at the American Jewish Committee, which is one of the country’s oldest Jewish organizations, founded in 1906. The centrist organization has become known in recent years as a sort of department of state of the organized Jewish community, cultivating ties with foreign governments, making Israel’s case at home and abroad and fostering interfaith relationships.

“For me, this foreign policy work has been a natural continuation of my deep ties to the American Jewish community and my long-standing advocacy on behalf of the U.S.-Israel relationship,” Deutch said in a statement. “Beyond foreign policy, we have also seen an unprecedented rise in antisemitism in our own country and abroad, and I have been at the forefront of the Congressional response as the founding co-chair of the House Bipartisan Task Force for Combating Antisemitism.”