Roger Stone said Jared Kushner needed ‘a beating’ and a death threat, and that he was not joking 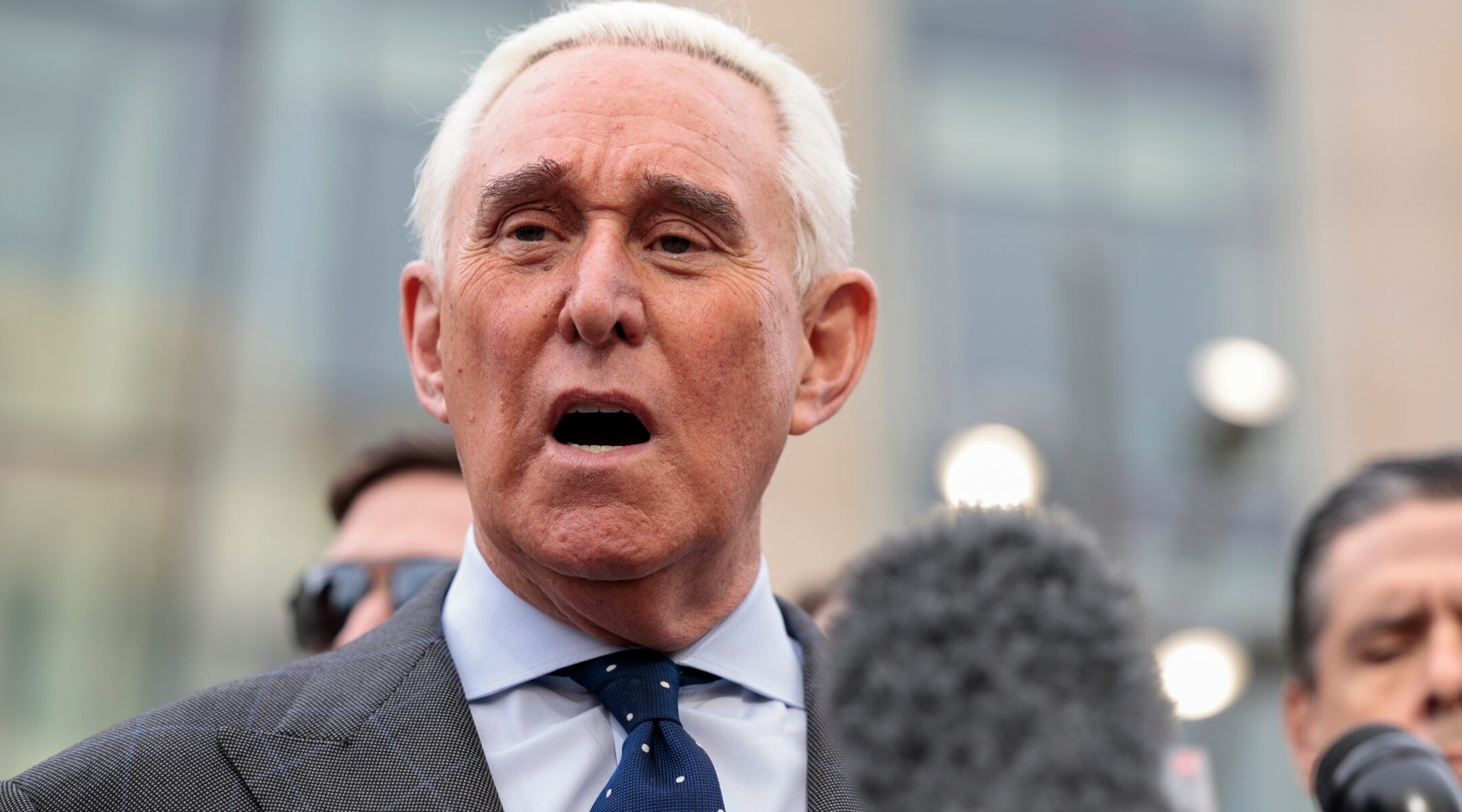 WASHINGTON (JTA) — On President Donald Trump’s last day in office, Roger Stone was furious that his old friend declined to pardon a bevy of Stone’s associates and fellow travelers. The longtime political trickster blamed Trump’s son-in-law, Jared Kushner, and he had a plan.

“In two weeks he’s moving to Miami,” Stone told Enrique Alejandro, his employee, referring to Kushner. “He’s going to get a beating. He needs to have a beating. And needs to be told, ‘This time we’re just beating you. Next time we’re killing you.'”

Alejandro was wary of the Danish documentary team filming this exchange, and urged Stone to explain he was joking, according to a Washington Post report posted Friday.

The Post was the first to review hours of footage by the Danish documentarians, who followed Stone for two years. Stone told the Post his remarks were removed from context but did not explain how.

It was not the only time that day — Jan. 20, 2021, the day of Joe Biden’s inauguration — that Stone contemplated violence against Kushner. Stone told a friend over the phone that Kushner should be “punished in the most brutal possible way” and would be “brain dead when I get finished with him.”

Kushner, who is Jewish, took the lead in screening pardon and commutation requests in Trump’s final weeks. Stone, who is not, wanted Trump to issue an array of preemptive pardons — a highly unusual move — in anticipation of possible prosecutions against the array of lawmakers and others who worked to overthrow Biden’s election, urged on by Trump’s false claims that he was there rightful winner. Followers who heeded Trump’s false claims stormed the Capitol on Jan. 6.

Stone himself was pardoned by Trump in December 2020 for his conviction on charges of obstruction, making false statements and witness tampering in relation to an investigation into interference in the 2016 election. Before becoming an adviser to Trump, Stone had been known for his capacity for “dirty tricks” in his role campaigning for President  Richard Nixon.

Speaking directly to the documentarians, the Post reported, Stone likened his appeals to Trump to preemptively pardon his associates to appeals to President Franklin Delano Roosevelt to stop the Nazi genocide. He threatens to expose personal details of Pat Cipollone, the White House counsel who advised Trump to avoid some of the more far-fetched pardon requests, include some advocated by Stone.

Stone also lobbied the Trump administration for pardons for convicted criminals. Stone was paid for the service, which is a legal practice; a number of interlocutors were paid to solicit pardons in Trump’s final days in office.

Among the many people Stone consulted with for pardons was David Schoen, the attorney who represented Trump in his impeachment trial related to the Jan. 6 insurrection. Schoen had helped Stone secure a commutation for his crimes, which Trump later elevated to a full pardon.

Stone was seeking pardons for two other Schoen clients, former members of the Colombo crime family serving life sentences for murder and racketeering.

Schoen is recorded on video regretting Trump’s decision not to issue preemptive pardons, and not to issue pardons to the two Colombo mobsters, noting that they were vocal supporters of Trump.

“This was a free home run that could have saved a lot of loyal lives,” Schoen is recorded as saying.

Schoen, who is now the lay leader of the Zionist Organization of America, told the Post he did not seek pardons for anyone from Trump. He did, however, acknowledge showing Trump an article he wrote explaining what he thought were the injustices visited on his ex-mobster clients.