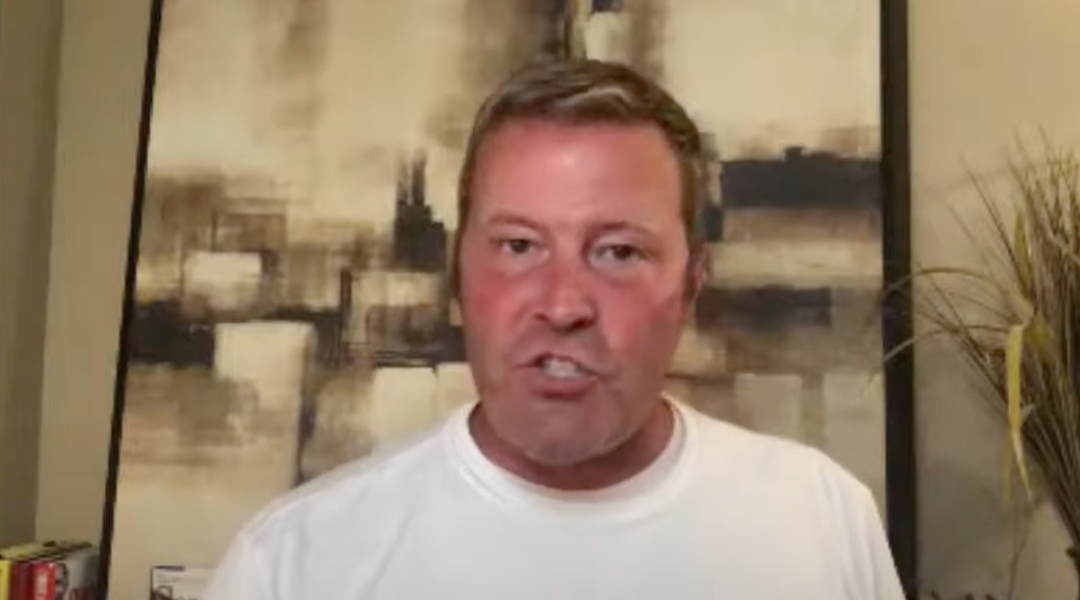 Robert Regan was the Republican nominee for the state House seat in Michigan's 74th district in 2022. (Screenshot from YouTube)
Advertisement

(JTA) — Robert Regan, the Republican nominee for a safely conservative state House seat in Michigan, has frequently re-posted antisemitic content and shared his own extreme views on Jews.

Regan is in a good position to win a May 3 special election for a vacant seat representing Kent County, Michigan’s 74th state district, after winning a crowded Republican primary last week by a narrow margin of 81 votes (according to unofficial tallies). Michigan’s Republican Party congratulated Regan on Wednesday for winning the primary.

In May 2021, Regan’s personal Facebook page shared two posts, still visible on his page as of Monday, in which he expressed antisemitic opinions. In one, he shared an image of a quote branded by the logo of Smoloko News, a now-defunct antisemitic website. The quote described “feminism” as “a Jewish program to degrade and subjugate white men.”

In January of last year, Regan shared a link to an antisemitic “family history” of the Rothschilds, the Jewish banking family often at the center of conspiracy theories about Jews and world banking domination. Two months later, he shared a meme made by a QAnon influencer that called “(((Them)))” the “real virus” in a post calling public health measures to combat COVID-19 “nonsense.” The triple parentheses, or echo symbol, is used online by antisemites to identify Jews.

In another post, Regan himself called Jewish financier and political activist George Soros a “Jewish communist investor” and “pure evil.”

Regan, a Grand Rapids resident whose LinkedIn page says he is a trucking company executive, frequently posts his views on social media alongside right-wing memes. Recent Facebook posts show that he supports causes including COVID vaccine skepticism and the debunked lie that former President Donald Trump won the 2020 election. “Climate change is a hoax, just like Covid was,” he tweeted in 2021.

During a Zoom call with other proponents of decertifying Michigan’s 2020 election results, Regan also made a comment about rape that may have been sarcastic: “Having three daughters, and I tell my daughters, well, if rape is inevitable, you should just lie back and enjoy it.”

He also manages his own business called Big Boyz Shorts, which bills itself as a subscription service “to provide meaningful and inspiring stories about manhood” and to encourage “chaotic boys” to become “young orderly men” and “creative patriarchs.”

Regan has never held elected office despite being a perennial candidate for state House. The seat he is running for has been held by Republicans for the last decade. The winner of this election would only serve for just under eight months, as Michigan’s new independent redistricting panel has eliminated the district starting in 2023.

Regan became an infamous national figure during his 2020 campaign for the same state House seat after one of his daughters posted a viral tweet urging Michigan residents to “please, for the love of God” not vote for him.

Further posts of Regan’s involving Jews celebrated Trump for signing the Abraham Accords, saying the image of the White House Rose Garden’s signing ceremony was “what a real man in leadership looked like,” and compared Nazi brownshirts to Antifa. Regan has also said that Ukraine is “culpable” in Russia’s ongoing invasion of the country.

A JTA request for comment to Regan’s campaign was not returned.

Weiser himself has come under fire in the past for calling female Democratic politicians “witches” and saying they were “ready for burning at the stake.”