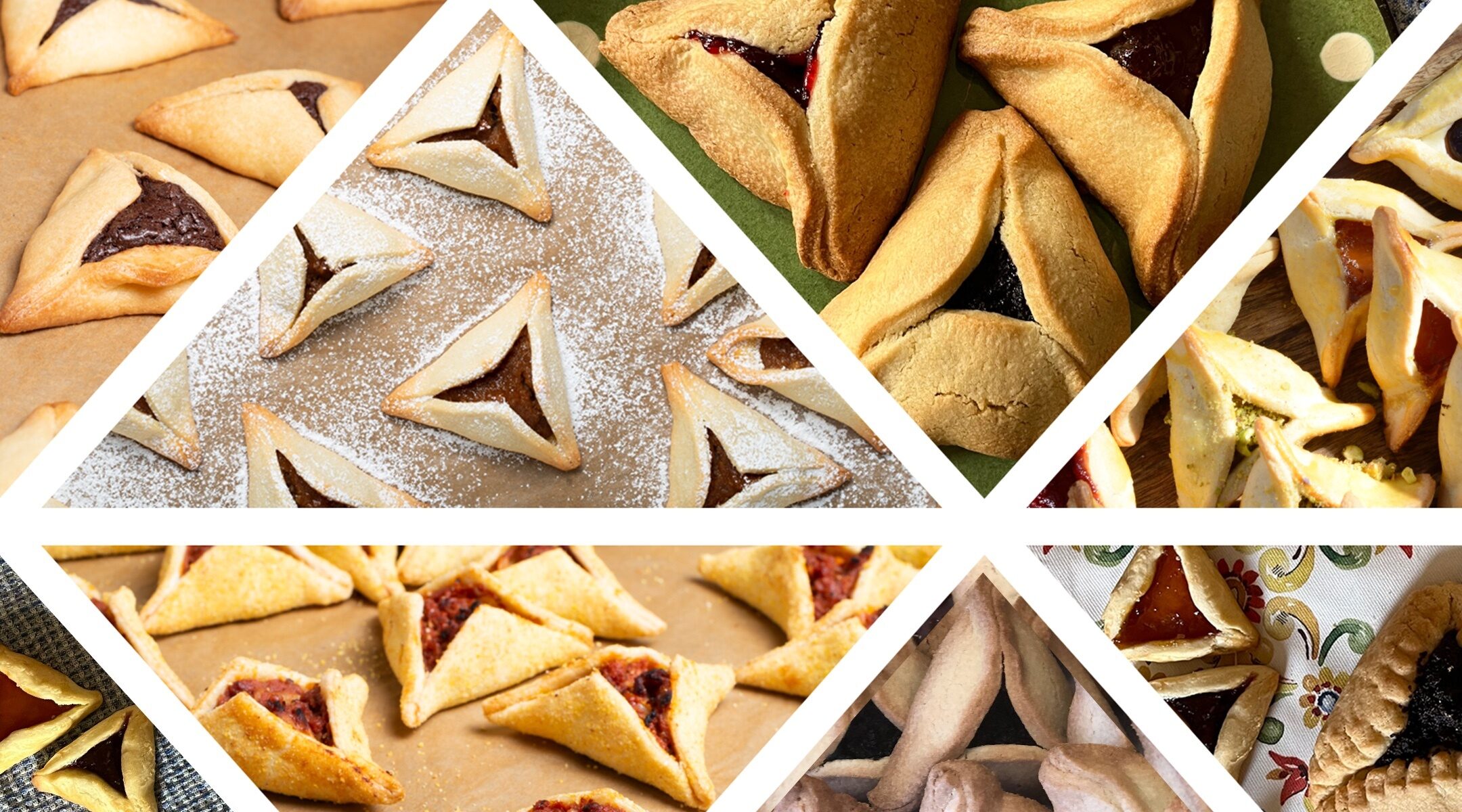 (New York Jewish Week via JTA) — Move over black-and-white cookies. For two weeks every year, hamantaschen, the triangle-shaped filled cookies associated with Purim, take center stage in bakeries all around New York. The choice of where to buy them grows as quickly as does the selection of fillings, which range from traditional poppy seed to pineapple to pizza.

Purim, to make a very long story short, celebrates the defeat of the evil Haman’s plot to massacre the Jews of Persia, as told in the Book of Esther. For 2,500 years, Jews around the world have celebrated their deliverance from death by reading the story out loud, sending gift baskets of food, giving to charity and preparing a feast.

But perhaps the tastiest way to celebrate Purim is by eating hamantaschen, the cookies whose name and shape refers to, depending on whom you ask, Haman’s ears, his pockets or his hat. According to Gil Marks in his “Encyclopedia of Jewish Food,” if the food we eat somehow references Haman, we “symbolically erase his name.”

So here’s to erasing this baddie’s name, in the most delicious of ways!  Purim begins this year on the evening of March 16. If you’d like to bake your own hamantaschen, our friends at The Nosher have a host of recipes. If you’d rather buy hamantaschen — hey, we don’t judge — check out our picks for 14 must-try spots to get them in New York City this year.

Lots of authors have worked on their books while soaking up the warm and cozy atmosphere in this bakery located near Columbia University, in the shadow of St. John the Divine Cathedral. You can find luscious Hungarian desserts like apple, poppy seed or cherry cheese strudel. Their oversized hamantaschen, which they sell year-round, have traditional fillings: poppy seed, plum, walnut and apricot. $3.25 each. Pick up or enjoy them at a table in the café.

Silver Moon is a small local bakery filled with, in my opinion, the best chocolate chip cookies (sorry, Levain!), fresh breads and cakes. They have been making buttery hamantaschen since they opened 21 years ago and, according to general manager Jennifer Kronner, “our customers wait for them all year round.” The crust is dense and buttery and the filling is high-quality jam and lots of it. Choose from raspberry, apricot and poppy seed hamantaschen. $6.50 each; pick up or enjoy at a sidewalk table. The bakery does not have kosher certification, but the pastries are made with only kosher ingredients.

This gluten-free restaurant and bakery is preparing hamantaschen with homemade fillings — choose from orange, raspberry, nutella and blueberry cheesecake. Some flavors are made with dairy; others contain nuts. They’ll be in-store March 14 through 18 and will be available for nationwide shipping, too. $4 each. (Kosher certified by IKC)

At this iconic grocery store filled with the best of everything — cheeses, olive oils, coffee beans, smoked fish — you can also pick up Zabar’s own kosher, pareve hamantaschen with apricot, poppy, prune or raspberry fillings. Buy them in-store or order on-line; 11 hamantaschen in a container for $12.98. You can get an assortment, including chocolate-dipped; 1 lb. 9 oz. for $29.98, or find them at their cafe next door. (Kosher certified by the OU.)

Breads, beloved by New Yorkers everywhere for their delicious babka, should be known for their outstanding hamantaschen, too. The crust is buttery and the fillings, all house-made, are a cut above. Choose from the classic poppy seed, chocolate nutella, perfectly light and not cloyingly sweet apricot, apple and the anything-but-classic, savory pizza hamantaschen, made with a quiche-like crust and filled with pesto, parmesan, mozzarella and tomato sauce. Prices are $3.25, each; 6 for $18 and 12 for $32. Nationwide delivery of the sweet hamantaschen is available. Pick-up, ship or eat in their café with indoor and outside seating. (Not kosher certified but the bakery sells only dairy products.)

Greenberg folds their trademark super buttery dough around familiar fillings like prune, poppyseed, apricot and cherry. They also sell hamantaschen made with a yeast dough, a traditional but less frequently made version that comes loaded with cheese, poppy, prune or cherry fillings. Mini hamantaschen: $2 each; a tin of 16 assorted mini hamantaschen is $38 and a tin of yeasted hamantaschen is $48. Shipping is also available. (Certified kosher under National Kosher Supervision.)

At these large, cheery Upper East Side temples to fine fish, meat and prepared foods, you can also pick up an assortment of house-made hamantaschen generously filled with dollops of Sir Real’s cherry, apricot or raspberry jams. Sold in boxes of 12 for $19.99; available for pick up or delivery to the Upper West Side and Upper East Side.

Lower East Side and Brooklyn

Known for their smoked fish and Jewish baked goods, this 100-plus-year-old appetizing store also makes a mean hamantaschen. A $13 box of eight hamantaschen comes in a variety of flavors: two each of poppy seed, prune butter, apricot jam brightened with lemon and raspberry jam sweetened with raisins and currants. The dough is special, too, enriched with butter and sour cream. $13 for eight. Pick up in store or order online via Goldbelly; on March 14 and 15 Russ & Daughters will be participating in Hamantaschen for Ukraine.

Adir Michaeli, the owner of this Israeli-style bakery, is preparing classic poppy seed hamantaschen, as well as some filled with chocolate, apples and dates, or halvah (sweet sesame paste). Their gluten-free hamantaschen is filled with nutella. $3.50 each. Pick-up from the shop or delivery in the Lower East Side via GrubHub.

These purveyors of fine, creamy tahini made from the Ethiopian Humera sesame seeds have teamed up with chef Amir Nathan of Lower East Side cafe Sami & Susu to create a chocolate, tahini and fig filled “halvataschen.” Pick up at Seed + Mill in Chelsea Market or at the restaurant (190 Orchard St.). Available for pre-order anytime before 2 p.m. on March 15; pick up available on March 16. A box of four is $14.

At two kosher bakeries, both on Lee Avenue in Williamsburg, pick up pareve hamantaschen for the holiday. Oneg charges $20 a pound for their small triangular cookies and Sanders charges $11 a pound. Once you have eaten hamantaschen made with butter, it is hard to be smitten with the dairy-free variety, but both bakeries sell respectable takes on the holiday sweet. Part of the experience is simply going there, walking the streets of the Hasidic neighborhood and seeing the pastries on display. Pick up at the shops. (Certified kosher by CRC.)

This delightful doughnuttery is from Fany Gerson, a chef and cookbook author who combines her Mexican and Jewish backgrounds in the foods she creates. Her delectable “doughnuttaschen” are triangular doughnuts, folded like traditional hamantaschen and filled with a choice of praline, dulce de leche or pineapple. Six for $26. Pick-up at the shop.

Instead of loading up their dough with sugar, the rugelach and hamantaschen from Erica’s Rugelach are rich with butter and sour cream, according to founder Erica Kalick. The apricot, raspberry and prune hamantaschen come in a mini-size — 20 to a pound — or in a larger version. The company will do custom orders for pick-up at their bakery factory or you can arrange for white glove delivery service. A limited edition of their rich, fragile hamantaschen will be sold beginning March 10 at Zabar’s on the Upper West Side and at Agata & Valentina on the Upper East Side. Hamantaschen, both large and small, are $20 a pound. (Kosher; self-certified.)