An Ohio rabbi’s misconduct involved a child. No one told his congregants. 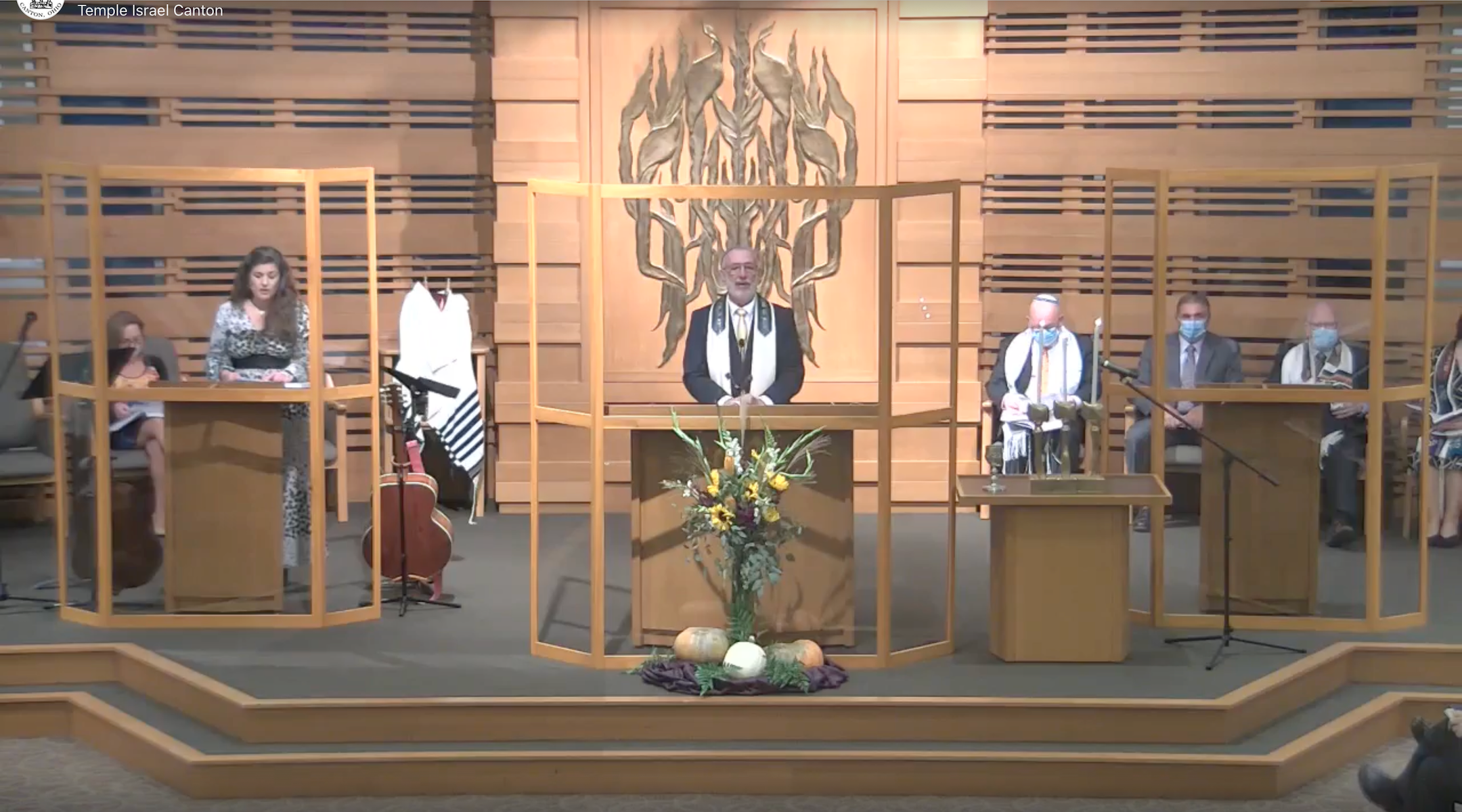 A screenshot from a video of Rabbi Jon Adland officiating the installation of his successor Rabbi David Komerofsky at Temple Israel in Canton, Ohio, Nov. 5, 2021. (Facebook)
Advertisement

(JTA) – The year after Rabbi David Komerofsky started working at Temple Israel in Canton, Ohio, his new community threw him a party.

Known in the synagogue world as an “installation,” the event marked Komerofsky’s arrival at Temple Israel. The Cleveland Jewish News covered the installation, noting that Komerofsky’s predecessor, Rabbi Jon Adland, had officiated the Nov. 2021 ceremony. A group photo shows the two men smiling side by side.

That picture took on a different meaning after Adland was named in a report last month about sexual misconduct within Judaism’s Reform movement.

“He participated in my installation, but knowing what I do now, that would not have been the case,” Komerofsky told the Jewish Telegraphic Agency.

Komerofsky — and his congregants — learned from the report that at the time of his retirement in 2019, Adland was barred by the Reform movement’s rabbinic association from working with children. That was a condition of a censure Adland had received after an ethics investigation into an allegation of misconduct involving a 14-year-old girl.

Exactly what that allegation was remains obscured from public view. The rabbi of the Indianapolis synagogue where Adland worked at the time of the alleged misconduct said child protective services in that city investigated the case.

Meanwhile, the censure, posted to a website operated by the Central Conference of American Rabbis, the Reform movement’s rabbinic association, listing rabbis who have violated ethics rules, said only that Adland’s rabbinic work required prior approval, not that he was barred from working with children.

By late 2020, the timeframe for the censure had lapsed and Adland’s name was removed from the ethics list. He had completed a rehabilitation process through CCAR known as teshuvah, a Jewish concept about making amends after causing harm.

The situation at Temple Israel comes amid a broad reckoning within the Reform movement over how its organizations and personnel have handled sexual misconduct within the movement, the largest in America.

Just in the past year, two former presidents of the Reform movement’s seminary, Hebrew Union College, were outed as sexual harassers; meanwhile, the rabbinic association, the Central Conference of American Rabbis, disclosed that a loophole in its ethics system allowed offending rabbis to evade sanctions. And a third report, into the movement’s youth programs, revealed allegations against several leaders and exposed a sexualized culture pervading Reform summer camps.

What happened in Adland’s case underscores that, even as investigators have repeatedly said that the climate within the movement has improved in recent years, there remain aspects of its handling of abuse allegations that have left communities in the dark, and potentially at risk, quite recently. It also renews attention to one recommendation in the reports, for the movement to consider the ways that belief in the potential for teshuvah might get in the way of responding appropriately to abuse allegations.

“This example shows why the investigations of the Reform movement and the bolstering of ethics processes are vital steps toward safety in our Jewish communities,” said Rabbi Mary Zamore, executive director of the Women’s Rabbinic Network, which has acted as a watchdog around sexual misconduct issues in the movement. “Transparency and communication will continue to be a foundational part of accountability from our local synagogues to our largest institutions.”

Hundreds of rabbis and Reform institution employees are pressing the movement’s leaders to commit to more specific and aggressive steps to respond to the reports’ conclusions and recommendations. Last week, they sent a letter to Rabbi Rick Jacobs, the president of the Union of Reform Judaism, and the movement’s executive committee to “respectfully request a response and meaningful action by Passover.”

Some changes have already been made. Had Adland been censured over the same incident today, for example, the public notice of his violation would note that a minor was involved, according to a spokesperson for CCAR. Indeed, the rabbinic association updated its listing of suspended and expelled rabbis after a March 2021 policy change to indicate that seven rabbis were punished because of misconduct related to minors.

Another recommendation, to share allegations across the Reform movement’s three major organizations, could also have made a difference: Adland had previously been accused of sexual assault against a minor while working as a rabbinic intern at a Reform summer camp in 1977.

“We did not have the fulsome picture that URJ now has about [Adland’s] prior conduct,” Rabbi Hara Person, CCAR’s chief executive, said in a written statement to JTA. “As CCAR has recently shared, questions about public disclosures, beyond those shared with an employer, are part of an ongoing review process, and we hope to share more about that later this year.”

The allegations against Adland came in the report of the third investigation, about the handling of abuse allegations within Reform youth programs. He was one of four rabbis named, alongside the longtime leaders of two camps and one person whom the Reform movement declined to ordain because of allegations against him.

According to the recollections of three former campers at Olin Sang Ruby Union Institute, or OSRUI, Adland touched them sexually, including kissing and digital penetration, during the summer of 1977. He was a 23-year-old rabbinical student. They were 13 or 14.

One of the three former campers said she reported his alleged abuse to her counselor at the time. The law firm behind the URJ report located the counselor, who said she didn’t do anything with the complaint, even though she was “troubled” by Adland’s behavior with the girls.

When reached by the law firm, Adland said he didn’t remember doing what he was accused of but he also said that he felt “ashamed” that he may have “acted in an unethical and morally reprehensible way,” according to the report.

Adland declined to speak to the Jewish Telegraphic Agency about the allegations.

The report also revealed an incident from decades later involving Adland and a 14-year-old girl that took place sometime between 2005 and 2010, while he was senior rabbi at Indianapolis Hebrew Congregation.

The synagogue’s current senior rabbi, Brett Krichiver, told JTA in an email that he first heard the allegations from the victim herself.

Krichiver said that after he was approached, he informed his synagogue’s leadership and that “appropriate authorities” became involved. According to Krichiver, the local child protective services agency conducted its own investigation into the matter. Krichiver also said that he referred the victim to the ethics committee of the CCAR, the rabbinic association to which both Krichiver and Adland belong.

Krichiver did not respond to additional questions, but what appears to have happened next is that a complaint about Adland was filed with CCAR.

CCAR found the allegations credible and chose to censure Adland, temporarily adding his name to a public list of rabbis who have violated the code of ethics for Reform clergy. By censuring, rather than suspending or expelling him, CCAR signaled that his violation was less severe.

Person, the organization’s chief executive, noted that CCAR did provide Temple Israel’s leaders with more details than were in the censure notice and informed them about the restrictions on working with minors.

Adland retired about a year after the censure was posted, eight years after coming to Temple Israel and after a 37-year career as a congregational rabbi. It’s unclear if the censure and his decision to retire were connected.

In early 2019, Komerofsky became a candidate for the opening left by Adland at Temple Israel. He had seen Adland’s censure notice and asked about it in his interviews. Congregation leaders confirmed the censure was in place but didn’t say more, and Komerofsky didn’t press the matter.

“In retrospect, I should have asked more questions,” Komerofsky told JTA. He also said that he believed lay leaders had acted appropriately with the information provided to them by the rabbinical association.

Current and former presidents of Temple Israel declined to be interviewed by JTA, referring questions to Komerofsky.

After the report naming Adland was released, Adland almost immediately relinquished the title of rabbi emeritus, and he and his family stopped attending services. The synagogue also asked anyone else who might have been harmed to come forward, but there have been no further allegations so far, according to Komerofsky.

“There is disappointment and sadness in the congregation,” Komerofsky said, who said that about 100 people signed on for a Zoom meeting to discuss the report. “For the people who have known Rabbi Adland for a number of years and have had positive interactions with him, they’re struggling with how to process that the person they’ve known in that way has also done these other things.”