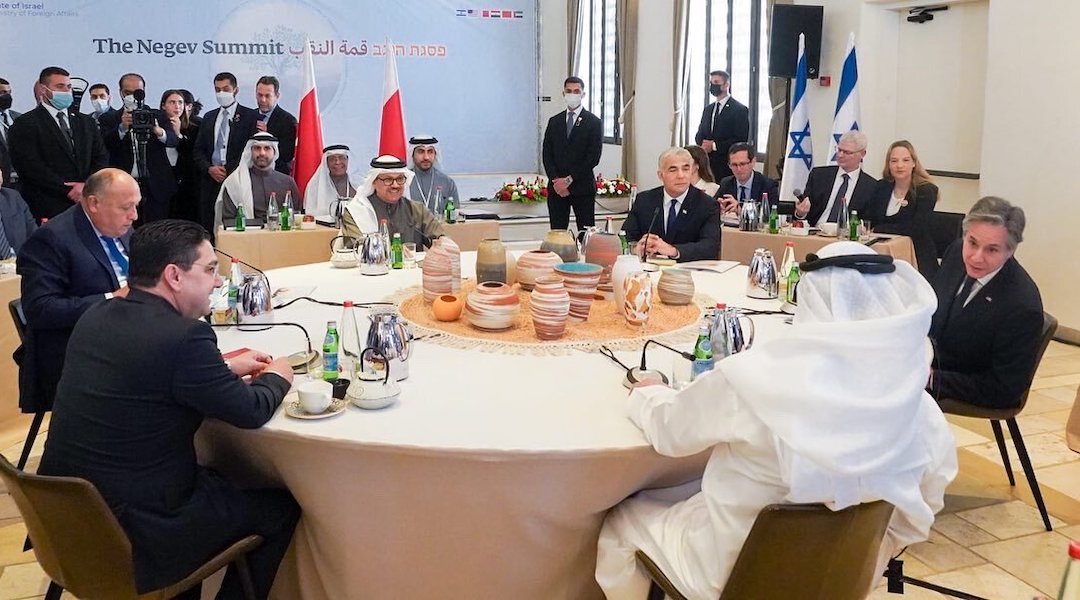 (JTA) — The historic summit meeting between Israeli leaders and their counterparts from Egypt, Morocco, Bahrain and the United Arab Emirates is set to become a regular event, rotating among the participating countries, Israeli officials announced Monday.

Leaders of the participating countries and Antony Blinken, the U.S. secretary of state, announced the regular meetings about regional security during a joint press conference at the conclusion of the first convening of Arab and Israeli leaders.

“This meeting is the first of its kind but not the last,” said Israel’s Foreign Minister Yair Lapid. “Last night we decided to make the Negev Summit into a permanent forum.”

The convening, and the announcement, are significant because they indicate that the Abraham Accords, peace agreements signed in 2020 that normalized relations between Israel and the United Arab Emirates, Bahrain and Morocco, are more than symbolic agreements. The countries at the summit discussed their growing ties with Israel and their desire to create a united front in opposition to Iran in the region.

The meeting took place in Sde Boker, a city in Israel’s southern Negev region that was also the home and burial place of Israel’s founding prime minister David Ben-Gurion.

News from the summit was interrupted Sunday night by a suspected terrorist attack in the Israeli city of Hadera, which resulted in the deaths of two police officers. In his remarks, Lapid said those participating in the meeting would not be intimidated by terror.

Bahraini Foreign Minister Abdullatif bin Rashid Al Zayani began his speech Monday morning by condemning the terror attack. “I would like to start by condemning the terrorist attack which took place last night, claiming the lives of two border policemen. And I would like to convey our condolences to the bereaved families and reaffirm our firm stance against terrorism and all its forms,” he said.

In his remarks, Moroccan Foreign Affairs Minister Nasser Bourita called the summit the “best response” to the attack in Hadera.

Several of the diplomats, including Blinken, also spoke about the Palestinian people and called for continued work towards a two-state solution.