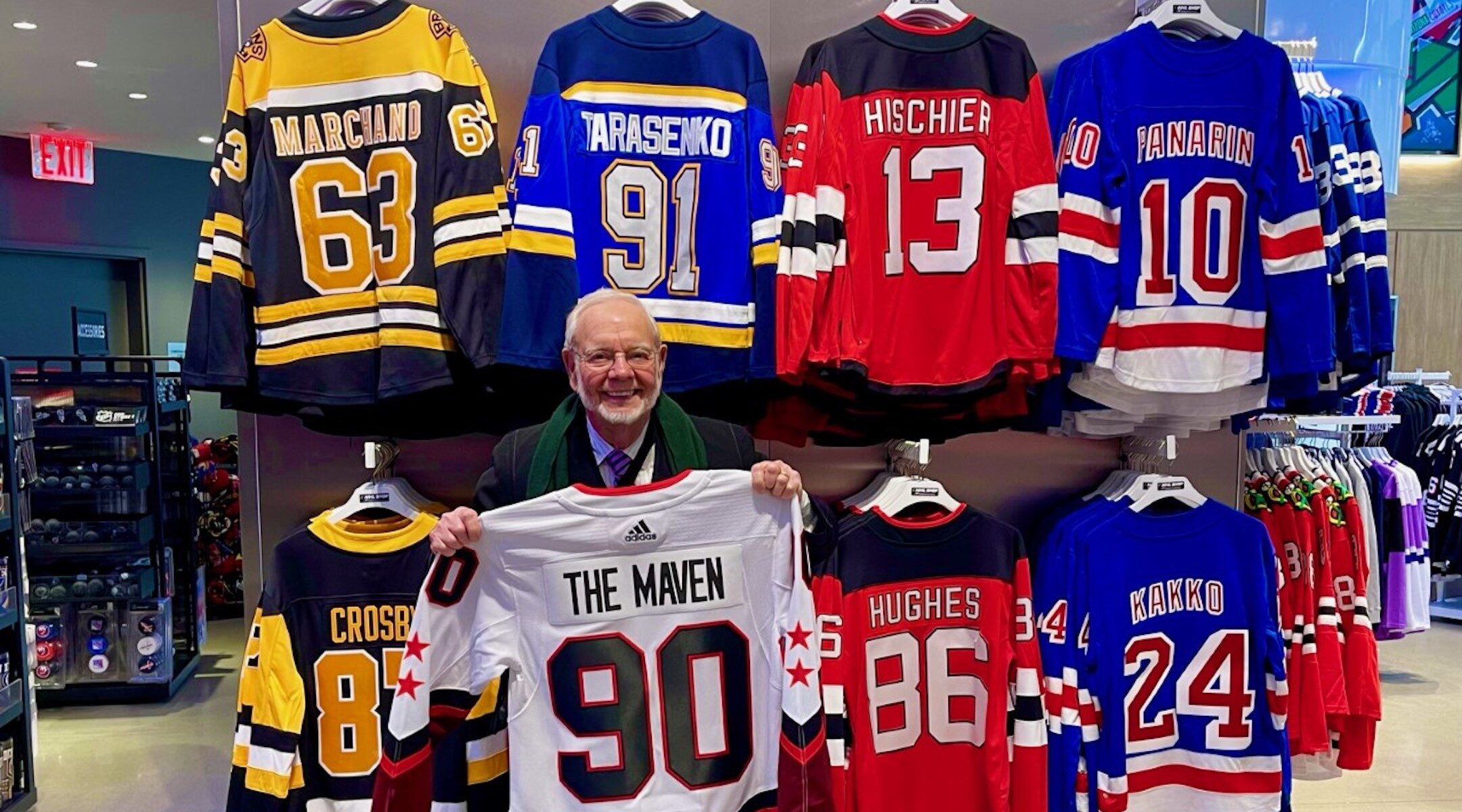 Fischler at the NHL store in Hudson Yards, holding the jersey that the NHL presented him with his moniker, "The Maven." (David Kolb)
Advertisement

(New York Jewish Week) — Stan Fischler, long known as “The Hockey Maven,” figured on quietly celebrating his 90th birthday on March 31 in Israel’s Kibbutz El Rom, the Golan Heights community where he lives with his son, Simon Fischler, his daughter-in-law and three grandchildren.

But a wider recognition of the milestone was advocated by David Kolb, Fischler’s Englewood, New Jersey-based business manager, and Jon Ledecky, owner of the New York Islanders, the National Hockey League team for which Fischler spent more than four decades as a television-broadcast analyst for Madison Square Garden Networks.

Fischler acceded, so Ledecky flew him to New York and feted him on March 30 with a dinner for 16 at Avra Madison Estiatorio, an upscale Greek restaurant on East 60th Street. The next night at UBS Arena, 17,255 of his closest friends sang “Happy Birthday” during the Islanders’ 5–2 victory over Columbus. There, he received a team-autographed “FISCHLER 90” jersey, along with a second jersey signed by arriving fans, and ESPN interviewed him during the first period.

“I don’t feel like I’m 90 —  I’m 19,” Fischler told the New York Jewish Week. “The whole thing was overwhelming. I had one of the greatest times I’ve ever had in my life. I wish there were a word other than ‘grateful’ for how I’m feeling.”

Even after officially retiring from his broadcasting job at Madison Square Garden Networks in 2018 and moving to Israel, Fischler has conceded little to age. Reporting, writing and maintaining friendships throughout hockey keep him young, he said. Even in retirement, Fischler pens six weekly columns: three for The Hockey News, including one, “The Fischler Report,” that’s named for his recently-sold long-running newsletter; and one each for NHL.com, the Islanders and the New Jersey Devils.

But that’s not all. He’s putting the finishing touches on a book about the Islanders that’s due out in October for the team’s 50th anniversary, adding to the approximately 100 books he’s written on hockey and another lifelong passion, subways and trolleys. In December, Fischler was in Denver for a dinner inducting him into the U.S. Hockey Hall of Fame; he also showed up at Park Slope’s Old Stone House to discuss “Tales of Brooklyn,” a compilation of his essays that sweetly evoke his 1940s childhood centered at his family’s home at 582 Marcy Avenue in Williamsburg.

Fischler was so busy during last week’s five-day visit to New York that he didn’t have time to return to where the house once stood. “But as my grandmother used to say, ‘With one tuches [backside], you can’t be at all the chasonos [weddings]’ —  and my tuches was moving as fast as it can,” he quipped. 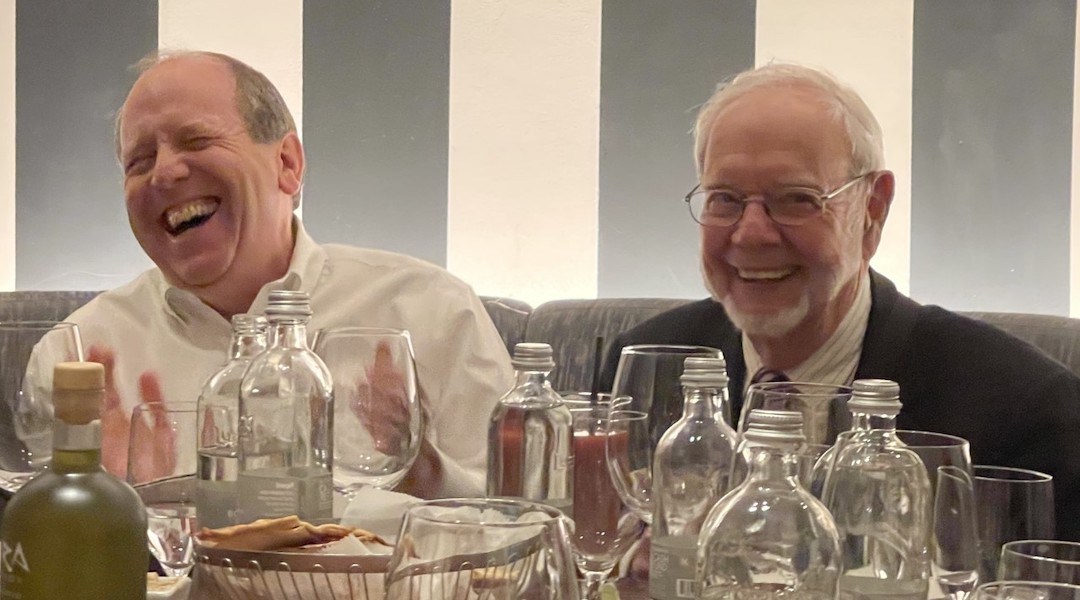 Because the birthday celebrations developed at the last minute, neither the Israeli Fischlers, nor Stan’s elder son, Ben, who lives in Oregon with his family, were able to come to New York to partake. Ben was named for Fischler’s father, who in 1939 unwittingly set Stan, an only child, on the path to hockey fame by taking him to a game at Madison Square Garden to see the New York Rangers’ minor-league team, the Rovers, play. For the 7-year-old, the sport was love at first sight.

Hockey also entranced Fischler’s late wife, Shirley. Covering a game for a Canadian newspaper in 1971, she wasn’t admitted to the press box at the Garden due to its men-only policy. She successfully challenged the ban, paving the way for females to cover the sport. The couple collaborated on “The Hockey Encyclopedia,” a 720-page behemoth, and several other books prior to Shirley’s death in 2014.

At home in Israel, Fischler spends most afternoons at the Canada Centre in Metula, a 45-minute drive from his home in El Rom, to watch his grandchildren’s teams practice and play games. In recent weeks, he joined them in Bern, where two grandkids were temporarily playing for Swiss youth teams. He calls them “The Flying Fischlers” and analyzes the skills of the boy and two girls as a hockey scout might.

Though his posture has become slightly stooped, Fischler enjoys good health and his mind remains razor-sharp. He continues whipping out jokes — some clean ones, even —  and stories with range, recall and delivery that’d be the envy of many a performer at The Improv. By Fischler’s count, he told 21 jokes between courses at Ledecky’s dinner.

As it happened, the dinner was just around the corner from The Sherry-Netherland, so I asked him to share an anecdote about the Art Deco hotel that’s older than Fischler. Surely he had one, being a raconteur of the first order and an enthusiast of his hometown’s history, who used to lead walking tours of Manhattan and Brooklyn. He didn’t disappoint: Fischler pointed out that Jack Benny, on his legendary radio show, occasionally mentioned the hotel. That led him to tell about meeting the Jewish comedian at a dinner at Sardi’s honoring actress Carol Channing circa 1970. Channing, he added, was his “best and most pleasant” interviewee ever.

During one of our FaceTime conversations, son Simon interrupted us to advocate for his father’s induction into the Toronto-based Hockey Hall of Fame. It’s one major honor that hasn’t yet accrued to Fischler, who’s earned multiple Emmy Awards as well as the NHL’s Lester Patrick Trophy for contributions to U.S. hockey. Several of Fischler’s cronies have lobbied for his induction, but The Hockey Maven swiftly dismissed such talk.

Fischler is welcome just about everywhere else —  particularly in hockey circles. During his trip to New York last week, he first stayed with Kolb, who had started as his intern, and then with Matt Fineman, one of his former MSG producers. Both families previously hosted Fischler for Shabbat dinners and holidays — last Hanukkah, Kolb bought Fischler a tallit (prayer shawl) as a gift, as Fischler davens (prays) every morning, often after asking people for names of those for whose good health he can petition God.

“We got him a new one,” Kolb said of the gift, noting that Fischler’s old tallit “was fraying.” Fortunately, at 90 years young, its wearer isn’t.