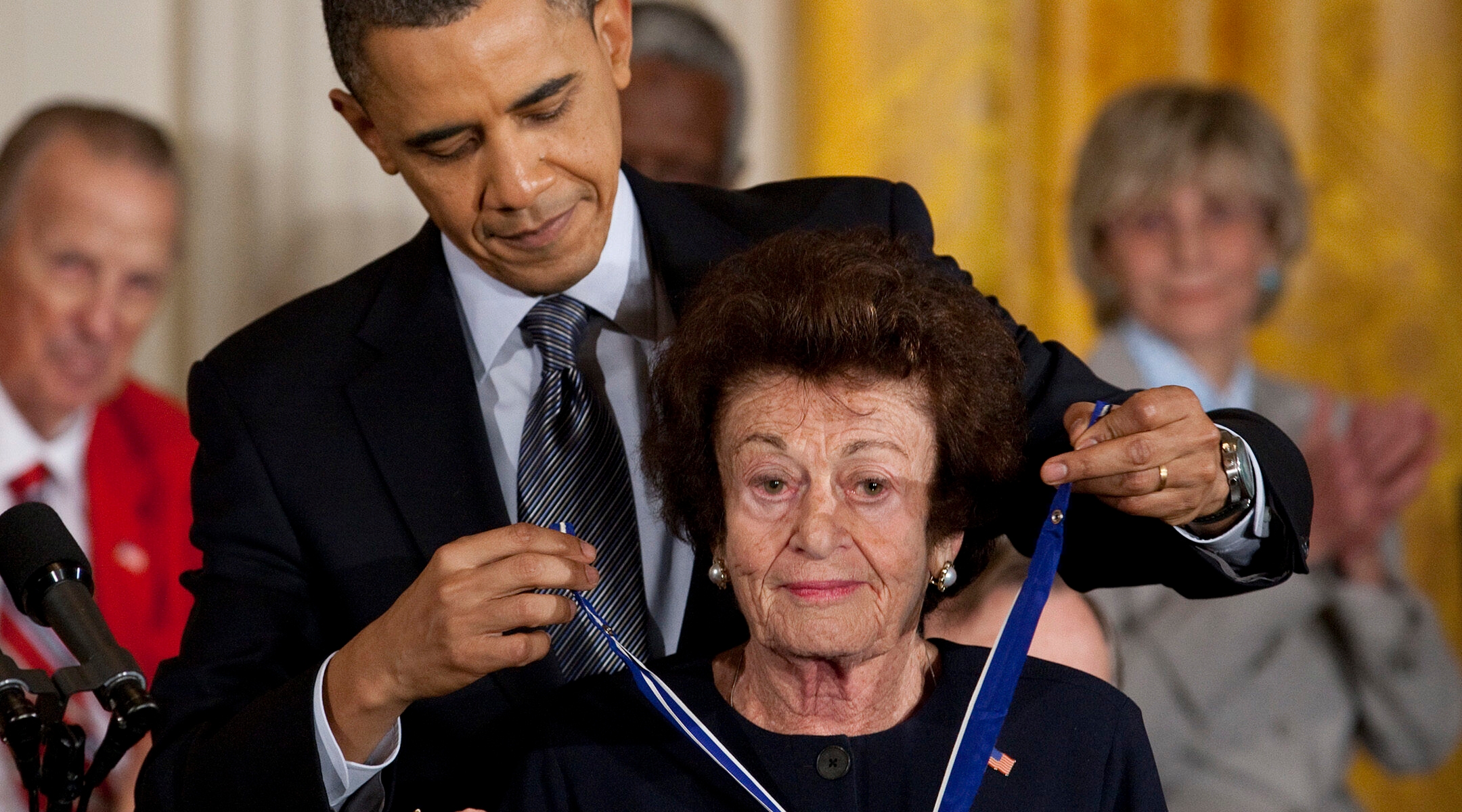 (JTA) – With Allied forces swiftly approaching during the liberation of the concentration camps, Nazis barricaded Gerda Weissmann Klein and other Jewish survivors inside a barn, planting a time bomb outside. A sudden rainstorm disconnected the bomb’s wiring, and American forces found the barn and unlocked the door.

Weissmann Klein told the first rescuer she saw that she was Jewish. He responded that he was, too. Then he held the door open for her. A few years later, the two – the survivor and her liberator, U.S. intelligence officer Kurt Klein – were married.

That was how Weissmann Klein emerged from the depths of despair to become a bestselling author, humanitarian and Presidential Medal of Freedom honoree. She died Monday in her home of Scottsdale, Arizona, at the age of 97.

During World War II under Nazi occupation, Weissmann Klein and her family were deported from the Bielsko Jewish ghetto in Poland. Her parents were sent to Auschwitz, but Weissmann Klein was transported to the Gross-Rosen camp system to perform forced labor. Liberation came after a brutal 350-mile death march to avoid the advance of the Allied forces. Of the 4,000 women who started the march, fewer than 120 survived.

After the war, the Kleins married in Paris in 1946, and the couple then moved to the United States, where they initially settled in Buffalo and Weissmann Klein ultimately became a naturalized citizen. She became a bestselling author of 10 books, including her 1957 autobiography, “All But My Life,” which is frequently used as a text by Holocaust educators, and “The Hours After: Letters of Love and Longing in War’s Aftermath,” a chronicle of her and her husband’s correspondence in the years between liberation and their marriage.

Decades later, Weissmann Klein’s story became the basis of the 1995 HBO short documentary “One Survivor Remembers,” which won both an Emmy and an Oscar (and is currently available for streaming on HBO Max). The film’s director, Kary Antholis, had intended the movie to serve both as commemoration of the 50th anniversary of the liberation of the camps, and as a clarion call for action concerning the Bosnian and Rwandan genocides of the 1990s.

In Klein, Antholis found his ideal subject: a survivor who could articulate in the present day both the horrors of the camps, the miraculous resilience of the human spirit, and a general plea for tolerance and common humanity.

At the Oscars, Klein was almost played off before she could deliver an acceptance speech; but she stood her ground, and delivered a memorable message, concluding with, “Each of you who know the joy of freedom are winners.”

Kurt Klein died in 2002. In 2008, Weissmann Klein founded with her granddaughter, Alysa Ullman Cooper, the nonprofit Citizenship Counts, which teaches students across the country about civic rights and responsibilities.

For this and other humanitarian work, on Feb. 15, 2011, President Barack Obama presented Weissmann Klein with the Presidential Medal of Freedom, the highest civilian award in the United States.

“The death of Gerda Weissman Klein underscores the importance of Holocaust education. Today’s generation of students are the last to have the opportunity to meet and hear from a Holocaust survivor, a victim of the genocide that claimed more than six million Jewish lives,” said Sheryl Bronkesh, president of the Phoenix Holocaust Association. “Schools should not delay in bringing in survivors — in person or virtually — to talk to students so that they can learn directly about the consequences of hatred and bigotry.”

In a speech to the Jewish United Fund of Chicago’s 1996 annual meeting, Klein lamented how it had “never been sufficiently illuminated that” even “under the most unspeakable conditions, the finest qualities of humanity blossomed forth.”

“I wish to convey to you the joy I always feel of going home, with the knowledge that my husband and our home will be there,” Klein told the crowd. “And no power — at least on this earth — can rightfully take them away from me again.”

A version of this article originally appeared in the Jewish News of Greater Phoenix, and is adapted here with permission.