The Twitter activist behind the far-right ‘Libs of TikTok’ is an Orthodox Jew. Does that matter? 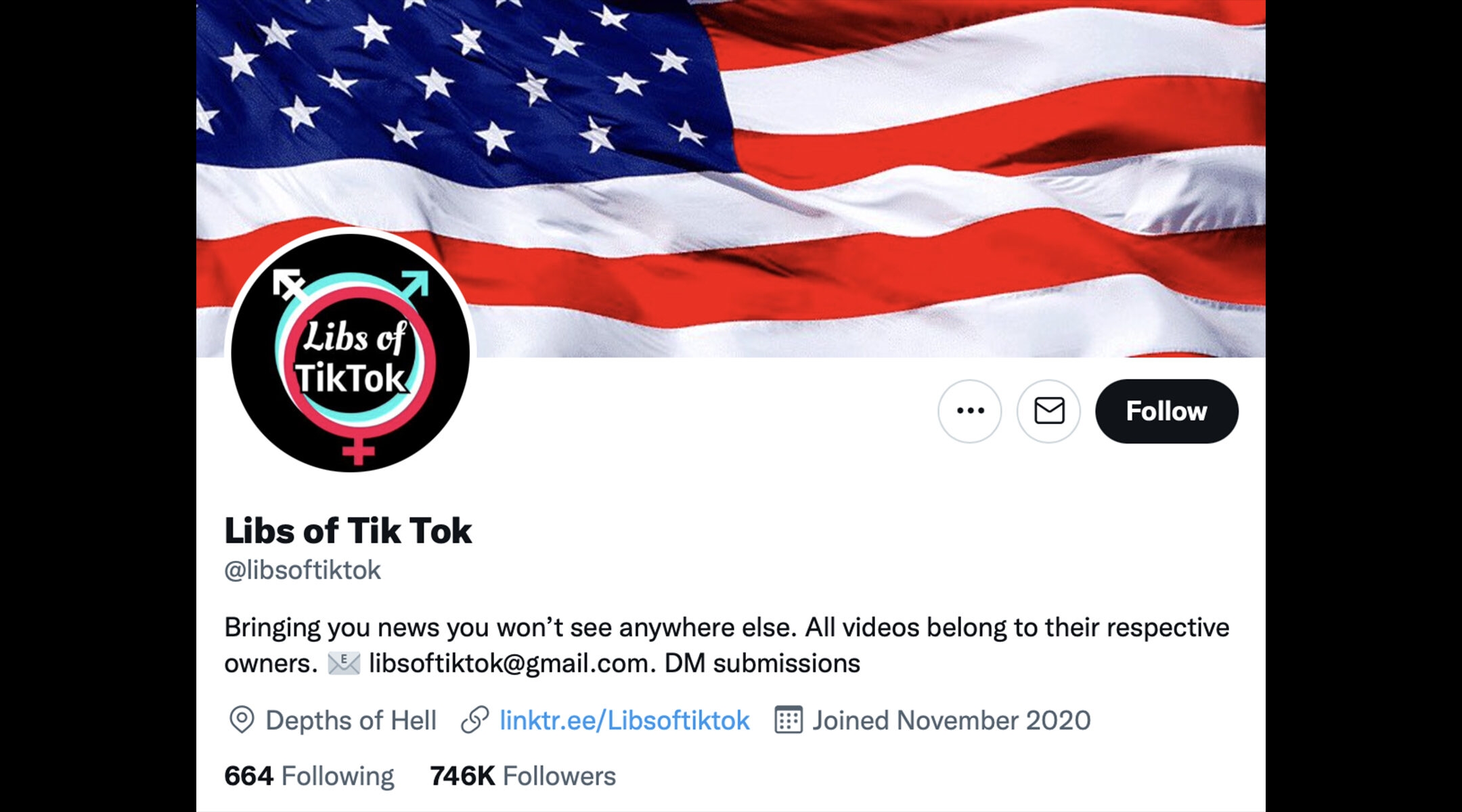 The Twitter feed of Libs of TikTok, an account run by an Orthodox Jew that targets teachers who teach children about sexuality and gender identity. (Twitter)
Advertisement

(JTA) — Chaya Raichik says she’s responsible for getting teachers who discuss gay and transgender issues in the classroom, whom she calls “evil,” fired. She helped pioneer the term “grooming” to describe teaching about sexuality. Her Twitter account has hundreds of thousands of followers, and she has influential fans, including the spokeswoman for Florida Gov. Ron DeSantis and podcaster Joe Rogan.

She’s also an Orthodox Jew, according to a Washington Post expose Tuesday that revealed Raichik to be behind the massively popular Twitter feed Libs of TikTok .

That information was contained at one point in Raichik’s Twitter bio, where users often share elements of their identities, The Washington Post reported. The newspaper reported nothing else about Raichik’s Jewish identity, but it said she recently moved from New York City to Los Angeles.

Raichik is a prominent name associated with Orthodox Jews in South California, where Rabbi Shmuel Dovid Raichik was an early emissary of the Chabad movement and where his son Shimon was a top leader until his death last year.

Who Chaya Raichik is, and if and how she might be connected to that dynasty, spurred speculation among many Jews on Tuesday. Meanwhile, the Post’s revelation of Raichik’s name and of her faith affiliation spurred outrage among conservatives, who accused the newspaper of antisemitism and of “doxing” her, or revealing her identity in order to harm her.

It also is renewing conversation about how deeply some members of the Orthodox community are embedded in the American far right. Raichik, in previous incarnations on Twitter, has embraced former President Donald Trump’s lies about the results of the 2020 presidential election. She claimed to be present during the Jan. 6, 2021 insurrection at the U.S. Capitol staged by Trump’s supporters.

In the runup to the 2020 election, Orthodox Trump supporters rallied in the streets for him in Brooklyn and demonstrated against the pandemic restrictions he mocked; the son of a  prominent Brooklyn judge who led a national Orthodox synagogue group was present among the rioters, while some Orthodox publications blamed leftists for the siege or downplayed the gravity of the Capitol mob’s actions.

The hesitancy among many in the Orthodox community to engage in online culture wars has fallen away over the last decade, as Orthodox Jews have come to see how influential one may be on social media, said David Bashevkin, an Orthodox educator who writes about the community’s engagement in the secular world.

“The Orthodox community is a reflection of the larger population. They have values they are committed to, if you want to see those values reflected, one of the arenas of debate has become social media,” he said in an interview.

He likened Orthodox engagement on social media to the community’s longtime activism in government lobbying.

“There is a larger tug of war for the hearts and minds of the public and like most communities with convictions, the Orthodox community participates,” he said.

Elchanan Poupko, a Modern Orthodox rabbi who is a frequent poster on Twitter, said that there remains a degree of stigma associated with posting on social media among haredi Orthodox Jews, who historically have been discouraged by their leaders from using social media and even smartphones. It’s all right to engage, but it’s better if it’s done anonymously, he said, which may be one reason that Raichik and her supporters have lashed out at The Washington Post for revealing her identity. 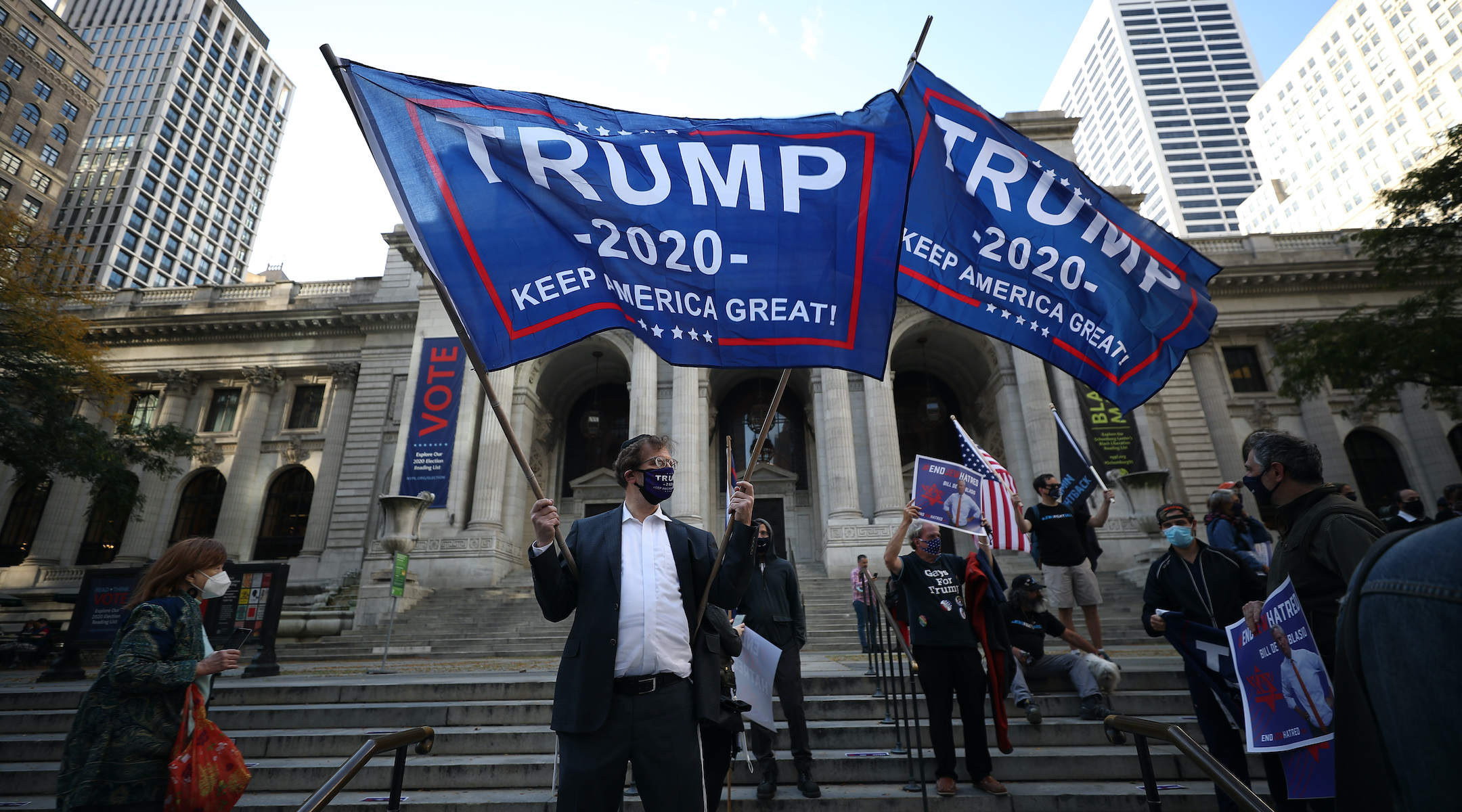 Some Trump-supporting Jews gather in front of the New York Public Library on Fifth Avenue as part of a protest to stop antisemitism, Oct. 15, 2020. (Tayfun Coskun/Anadolu Agency via Getty Images)

“It’s okay to admit you’re using it, but not with your name,” said Poupko, likening it to the joke about Netflix that he says circulates among the haredi Orthodox: “It’s okay to admit watching Netflix, but God forbid you have a TV in your house.”

As politics play out increasingly on social media, Poupko said, it becomes harder to avoid the arena if you want to defend your values.

He pointed to an analysis last year in an Israeli newspaper, Yisrael Hayom: Experts on the haredi Orthodox were quoted as saying that the community’s desire to influence heated Israeli debates over coronavirus prevention drove the community’s leaders to ease restrictions.

That opened the floodgates. “Whoever starts to surf will not easily stop or retreat,” Gilad Malach, an expert on the haredi Orthodox at the Israel Democracy Institute, told the newspaper.

Others have pointed out that, among Orthodox Jews, Chabad has carved out a unique space in its embrace of new media to spread its movement’s message.

Within both haredi communities and the Chabad movement, women increasingly engage on social media, sometimes developing influencer personas under their own name on topics as diverse as religious observance, fashion, parenting and antiracism.

Poupko explained that any restrictions on women engaging on social media are less severe than for men, a function of the belief that women are better equipped than men to withstand temptation. “It’s more okay for a woman to see immodesty” on social media, he said.

Shulim Leifer, a Hasidic Jew who is active on Twitter and who identifies with the left — a rarity in his community — said in an interview that Raichik’s mastery of Twitter should not be surprising. Orthodox Jews have for years mastered the art of the pithy and withering exchange in closed groups on apps like WhatsApp. Transitioning to a public space was no problem, and now there are Orthodox influencers who frequently go “live” on Instagram.

“Think Zelenko and the wide reach he got to the Five Towns crowd,” he said. Vladimir Zelenko is a haredi Orthodox physician whose dubious treatments for coronavirus were popular among some Orthodox communities early in the pandemic, and whose supporters used WhatsApp to spread his message of skepticism about the virus.

The embrace of Trump among the Orthodox on social media should surprise no one, said Leifer.

“Anyone shocked that a frum person could be an unhinged right-wing maniac has clearly not been checking WhatsApp statuses for the last 6 years,” he said on Twitter.

Yossi Gestetner, a haredi Orthodox political activist who for years has posted on social media, blasted the Post for identifying Raichik as Orthodox, saying it was not germane.

“Opposing the destruction of basic standards for what is spoken to young kids is a popularly held view that is not necessarily Orthodox Jewish-based, so why did the paper mention it?” he said in an interview. “The article is about the influence of the account packaged in a negative context. How is that Orthodox-related?”

Bashevkin agreed that Raichik’s beliefs were beside the point. Raichik’s tone, he said, was typical of social media. “Dunking” – that is, goading one’s opponents – “is more of a feature of the way the platform works,” he said, and was not typical of any religion or belief system.

It was Raichik, however, who in previous incarnations on Twitter used her name and for a time identified in her biography (albeit under one of her pseudonyms, President Houseplant — a gibe at President Joe Biden) as “Orthodox Jew.”

Raichik peddled and embraced many of the tropes that are popular with the pro-Trump right, including the former president’s election falsehoods.

Her fiercest focus, however, has been on the LGBTQ community. The Libs of TikTok account searches for and solicits from its followers videos in which adults — often teachers  — share their thoughts on explaining sexuality to children. (Such videos often proliferate on TikTok.)

The tweets are often amplified in the right-wing media ecosystem, especially on Fox News, and the account reports when teachers are fired as a result. “Any teacher who utters the words ‘I came out to my students’ should be fired on the spot,” a now-deleted tweet said in December.

One of the Twitter feed’s most devoted followers, Christina Pushaw, the spokeswoman for Florida Gov. Ron DeSantis, replied with a “You goin’ to jail” meme, and Raichik replied, “If only.”

Media Matters, a liberal media watchdog, reviewed dozens of engagements online between Pushaw and Libs of TikTok , and concluded that it was the Twitter feed that influenced Pushaw to describe a new state law banning discussion of sexuality in grades K-3 as targeting “groomers” — likening the law’s opponents to sexual predators. Pushaw’s use of the term has become commonplace among conservatives.

Raichik did not reply to requests to her Libs of TikTok identity for an interview, nor did a woman who is named Chaya Raichik and who lives in Los Angeles reply to a WhatsApp message.

In a recent talk on the conservative podcast Ruthless, Raichik said she at times fleetingly regrets driving her targets out of the workplace.

“It’s not easy to be the one responsible for that, for someone losing their job, on the other hand, I mean these people, some of them are literally evil, and they are grooming kids,” she said. “They should not be in schools, they should not be teachers and it’s really good that they’re not teaching anymore. To be the one responsible for that, it is a little bit hard for me, but I think it has to be done.”

She mocked the terminology the community uses, calling it “LGBTQIABCD” and laughed. “A lot of it is based on narcissism,” she said. “Society has to give in to their delusions.”