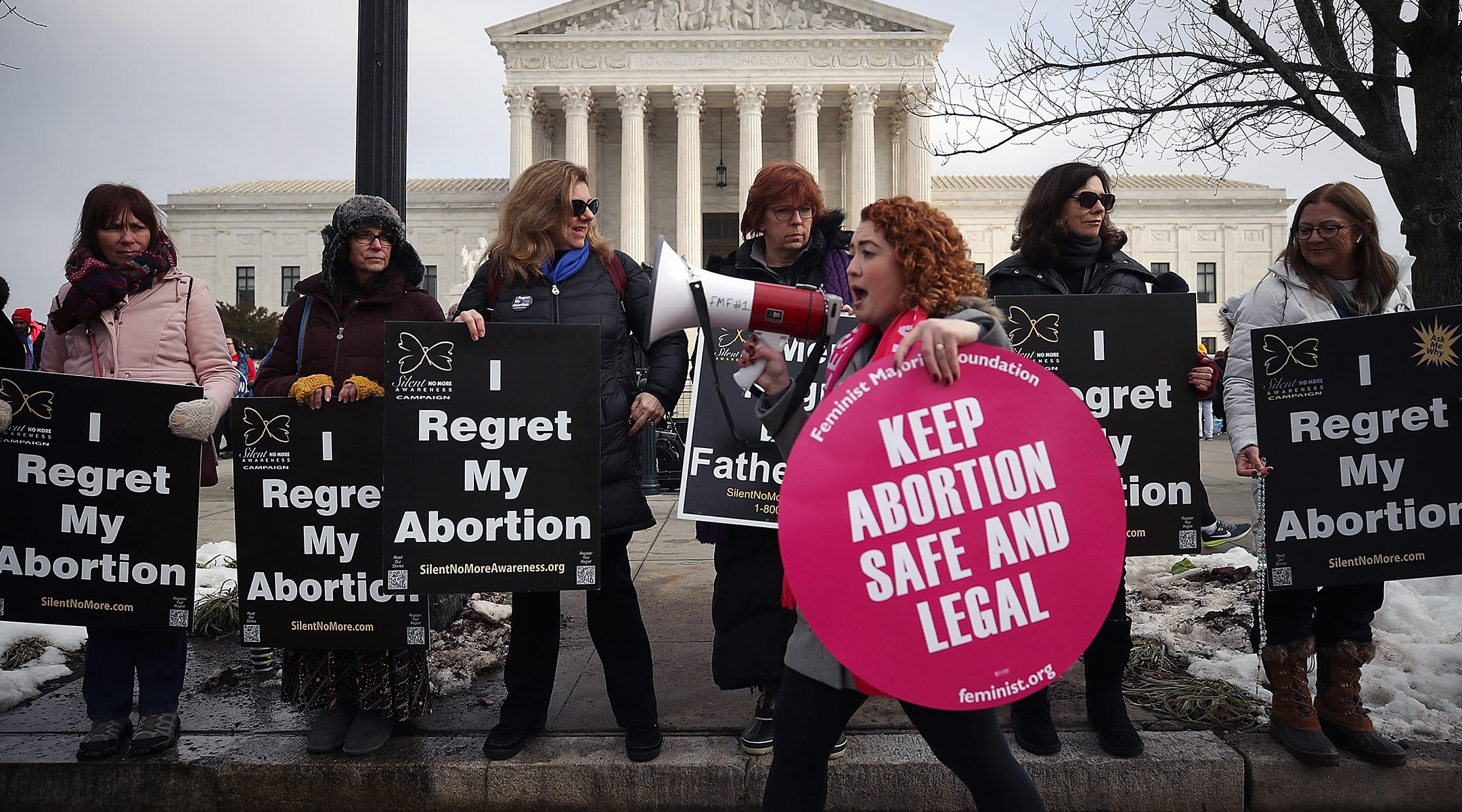 Protesters on both sides of the abortion issue gather in front of the U.S. Supreme Court building during the Right To Life March in Washington D.C., Jan. 18, 2019. (Mark Wilson/Getty Images)
Advertisement

UPDATE: This article was updated on June 24, 2022, after the Court released its full decision to overturn Roe v. Wade.

(JTA) — The Jewish Telegraphic Agency and our partner sites at 70 Faces Media have answered the question many times over the years, a testament to its persistence in political life and its significance to American Jews: What do Jews believe about abortion?

After the Supreme Court overturned Roe v. Wade on Friday, the question is relevant yet again.

Here’s what we know: American Jews favor abortion rights, more than any other religious group, according to public polling. And traditional Jewish law permits (and even requires) abortion in some circumstances, particularly when the life or health of the pregnant person is at stake.

That means Jewish women in dozens of states will almost certainly become unable to access care that they might well decide is required religiously.

“What Jewish community would want to continue to live in a place where they are potentially barred from following halacha (Jewish law)?” Ephraim Sherman, an Orthodox Jew and health care professional, wrote in JTA in 2019. “Is a community even allowed by halacha to continue living in such a place?”

Liberal Jews in America have been advocating for reproductive rights as long as they have been contested — so, forever. Here are stories from 1967, pre-Roe; 1989, when American Jews attended a rally protesting calls to roll back abortion rights; and 1998, when Jewish groups responded to the murder of Dr. Barnett Slepian, a New York abortion provider who was killed just after returning home from saying Kaddish for his father.

Those groups have stepped up advocacy as threats to Roe v. Wade were mounted. The National Council of Jewish Women formed Rabbis for Repro to bring abortion talk to synagogues and other Jewish spaces; Rabbi Danya Ruttenberg, the group’s scholar in residence, has articulated Jewish views on abortion in essays and on national TV.

Meanwhile, Orthodox Jews in America have shifted rightward in recent decades. Our 2020 exploration of that shift suggests that one reason it didn’t happen earlier was Republicans’ focus on abortion in the 1980s, which didn’t resonate with Orthodoxy. But recently, the alignment of Orthodoxy and Republican politics has led to more vocal participation by Orthodox Jews in abortion discourse.

In 2019, when New York widened its abortion law, several Orthodox groups condemned the move. Some Orthodox women questioned why they would oppose a change that made it easier to follow rabbinic advice. At the time, an Orthodox leader argued in a JTA essay that “rights” are the wrong way to talk about the Jewish stance on abortion.

“Blanket bans on abortion, to be sure, would deprive Jewish women of the ability to act responsibly in cases where abortion is halachically required,” wrote the leader, Rabbi Avi Shafran. “And so, what Orthodox groups like Agudath Israel of America, for which I work, have long promoted is the regulation of abortion through laws that generally prohibit the unjustifiable killing of fetuses while protecting the right to abortion in exceptional cases.”

An estimated quarter of American women will have an abortion by age 45, many Jews among them. We’ve published first-person accounts from a few of them: Here’s one that our partners at Kveller, the Jewish parenting site, published last year, from a rabbi and mother who desperately wanted the pregnancy she ended.

And here’s a self-described “very Jewish” story from a rabbi who says she had an abortion “simply” because she didn’t want to be pregnant — a choice that she says Jewish tradition protects, too.

“If anyone tries to argue that abortion restrictions are justified under the prerogative of religious freedom, we can explain that our religious freedom demands that we have access to abortion care when it is needed and wanted,” wrote the rabbi, Rachael Pass.

And a longtime Jewish feminist, Barbara Dobkin, recalled how she helped a friend get an illegal abortion in 1966. “What about the crisis of losing the right to make decisions about our own bodies?” she asked. “Where is the communal outcry about that?”

That outcry is being felt today, as the Supreme Court opinion resonates across the country.

Legal analysts are already envisioning a Jewish woman as the perfect plaintiff for a case challenging a ruling overturning Roe v. Wade.

We know that the National Council of Jewish Women is planning a Jewish Rally for Abortion Justice in Washington, D.C., on May 17, and that Jewish reproductive-rights advocates are planning for a post-Roe world.

And we know that for Orthodox groups, the balancing act between backing Republicans and defending Jewish law and the right to follow it just got harder.

We plan to cover all of these angles, and more, in the coming days. Thank you for turning to us in this moment and others, and as always, please let us know what you want to know.