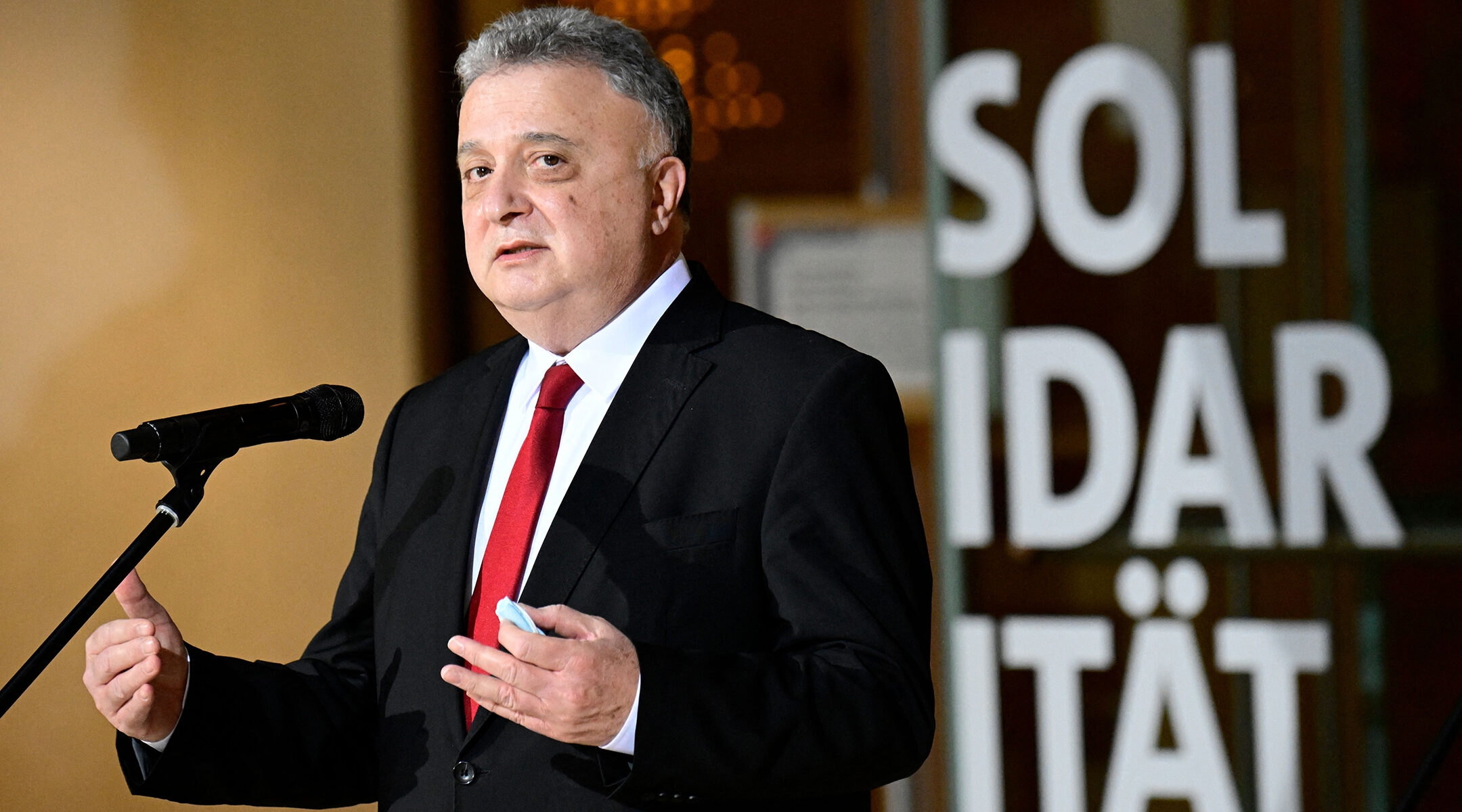 BERLIN (JTA) — Growing up in London had its ups and downs for Jeremy Issacharoff, Israel’s outgoing ambassador to Germany.

On one hand, as a schoolboy he was beaten up by skinheads and called a “dirty Jew.” On the other hand, he had long, civilized discussions with Arab and Palestinian classmates at the London School of Economics. Such experiences prepared him for his life as a diplomat: With some people you talk. With others, never.

Issacharoff, 67, recently reflected on his 40 years in the Israeli foreign service, days before leaving Germany, where he has served since May 2017. These have been four of Germany’s most dramatic years since World War II: the ends of different leadership eras in both countries; the resurgence of a German far right; a pandemic that, among other things, put the brakes on joint projects; and now, a war that is threatening to fracture Europe again.

Issacharoff’s tenure has been unusual. COVID-19 safety measures meant that, for two years, there were none of the usual gatherings, public appearances and celebrations. Widely considered the quintessential, non-confrontational diplomat, Issacharoff has been both praised and criticized for eschewing public commentary on German policies, in favor of behind-the-scenes talks on issues ranging from Germany’s position on Iran to its votes in the United Nations.

He spoke to the Jewish Telegraphic Agency about Germany and Israel’s “special relationship,” the Iran deal and the new Cold War reality.

JTA: Your career was marked early on by contacts with Arab counterparts. How did that begin?

JI: There is something about being in England, about how you conduct relationships with people, converse with people, listen to what other people have to say. … That sense of having tolerant conversations and exchange of views… is not always prevalent in the Middle East, [including] in Israel. Meeting with Arab and Palestinians in the 70s at the London School of Economics, we listened and disagreed and talked… In Israel it was much more difficult to have conversations like that, even among Israelis; they were so emotionally charged.

In the 1980s I had my first job in foreign ministry. I was a lawyer, one of the legal advisors on negotiations with Egypt on several normalization agreements. [Also] in the 1980s, [when] we still didn’t have relations with Jordan, I was a member of the team that went to discuss with the Jordanians the division of water on the Yarmouk River. We were [literally] sitting there on the sandbags with the Jordanians.

Sometimes people don’t understand the importance of a conversation as a means of showing respect to the other side. Listening, not just talking, respecting their time and their opinions. Ahmed Ali Aboul Gheit became a very close colleague over the years, and he is now secretary general of the Arab League. …Throughout my career, it has been so important to have these kinds of contacts and relations. Once you establish personal credibility, it is translated into things that affect the actual relations between countries. It is the beginning of trust, and the beginning of trust is the beginning of a solid relationship.

When it comes to talking, you draw the line at the right-wing Alternative for Germany party, which has managed to get seats in the national and local parliaments. Why do you take such a tough stand on them?

My position on the AfD has been clear from the beginning: not to have contact with [them] at any level. [In the] post-war era, people were more ashamed to be antisemitic, but when you scratched the surface a bit it seemed to emerge. And it could be that the AfD in Germany made [antisemitism] less dormant. When people heard statements [from its leaders], like about the Holocaust memorial [being] “a memorial of shame,” and that the [Nazi era] was just a piece of “bird shit” in German history: for me if anyone has any sort of nostalgia for the Nazi era then I will have no contact [with them], period.

You’ve witnessed a period of great change and challenge over the past four years. Now we have war in Europe. Was Germany too optimistic about the end of the Cold War?

The Europe and Germany I came to in 2017 is different from the one that I leave now… I was a student of the Cold War [era] and I see a lot of echoes from the past coming back: The East-West tensions that we are obviously witnessing. It is incredibly saddening, this crisis.

It is provoking a lot of introspection in Germany about how… they felt after the end of the Cold War and the fall of the USSR and the Wall in Berlin and the end of an era. And now [they] are being wrenched back to a previous reality.

Are you at all hopeful?

I refuse to believe that the outbreak of war is the end of diplomacy. This is a crisis and there are new echoes of an old conflict. But …I think that, in the end, diplomacy will help find a political framework… It is difficult to be optimistic. But the only alternative is escalation violence and death.

Germany is planning a huge increase in military spending, as a result of this war. Is this a worrisome development?

Germany evolved a postwar identity that was incredibly non-militaristic… and [the current administration is] very much part of that generation that wanted to distance itself from that past. This is not an easy step for the Germans themselves. [But] as Israeli ambassador and a Jew, obviously, I don’t necessarily see this as Germany becoming militarized again.

This is a different Germany, a Germany that realized they need to be very much more prepared, capable, to defend [them]selves, to project deterrence, to have credible military force that is defensive in nature… It is closer to the Israeli narrative [in which the parties to the conflict realize that they are not going anywhere]. So peace becomes the imperative.

Germany has not had to face the challenges it now faces [for generations]. You can feel it in the general public concern: This is not some remote conflict in Afghanistan, this is the European neighborhood. You go into the supermarket and there is no oil and no flour, no iodine. Something is registering in people’s consciousness.

Germany’s position on Iran’s nuclear capability is another hot issue. Where do you see that going today?

[Germany and Israel] agree on the ultimate objective but can disagree about how to prevent Iran developing a military nuclear capability. This was thoroughly discussed in the last visit of German Foreign Minister [Annalena] Baerbock with Prime Minister [Naftali] Bennett, and the conversation is carrying on at all levels very frequently. This is not an Israeli-German dispute… [there are] a lot of areas [nuclear, missiles, and regional involvement] in which there is no daylight between the German and Israeli positions. I am worried about Iran [not because of Germany but] because of Iran. Issacharoff in his office. (Toby Axelrod)

The post-war generation in Germany has a “special relationship” with Israel, and both countries have robust youth exchange programs that introduce teens to both countries. How crucial are these programs today?

In the initial years I was here I saw Israeli and German students [on youth exchange programs] meeting and talking together; I saw the friendly spontaneous combustion between them; they developed their own language. Both know that they are sitting on a complicated history… [Youth on exchange programs] stay in each other’s homes, and the German visitors also include migrant children… [with Muslim or Arab background]. They are going to Israel and discovering, “wow, what a country”’ …They come back home and they are amazed.

And so that, to me, it is a win-win on every single level: the kids who go on these exchanges will not come back [to Germany] and endorse antisemitism. They discover that Israel and the Jewish people are not just about the Holocaust. It is about a different reality that exists. They remember the Holocaust and respect it [and they understand that Israel is about much more than this].

In 2018 [former German Chancellor Angela] Merkel wanted a dramatic expansion of this [exchange] but then we had four elections [in Israel] and a pandemic… and it didn’t work out. We have had very senior visits in the last months, at least two in Israel and two here [in Germany, about restarting this effort]. It is my biggest hope… this is a very crucial investment in our future with Germany.

No one knows exactly how many Israelis have moved to Germany, but they have become a significant presence in recent decades. Does Israel begrudge them for leaving?

Being the son of Israelis who lived abroad I don’t feel it is appropriate to judge… I tell them I am not willing to give up on you, and not give up on your children because I was the child of Israelis who found his way back to Israel. It is as simple as that. [It’s] always been a pleasure to meet with the Israelis living here and engage with them and keep a door open… The main message I talk about is that our strength is in our unity.

Germany has eased the way to citizenship for Ukrainian Jewish refugees. What do you say to those who choose Germany over Israel?

I find these decisions can be very intensely personal, and I don’t want to judge it… It may be family ties, or [other] reasons that make them want to be in Israel or in Germany…

Israel will remain a magnet for Jews who seek safety and refuge but it won’t have a monopoly on that and [we] will have to think about how it can still provide an element of attractiveness of “coming to Israel and coming home.”

Your successor in Berlin is Ron Prosor, former ambassador to the United Nations and the United Kingdom. What advice would you give him?

Being ambassador to Germany is one of the most incredibly interesting jobs any Israeli diplomat can have. Always look to have a very strong open and — if necessary — discreet dialogue with your German counterparts. You can get a lot done quietly.