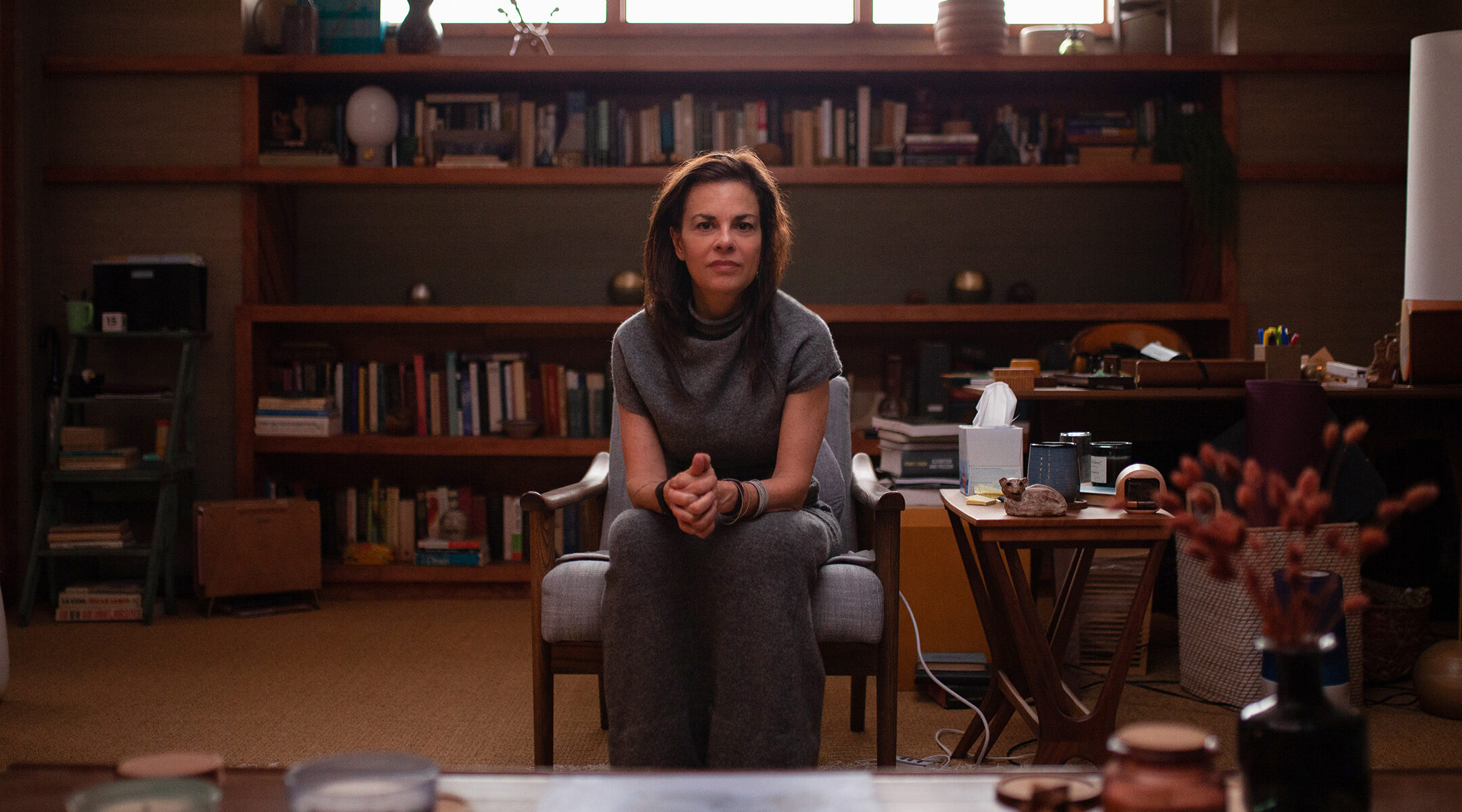 Orna Guralnik was born in the United States to Israeli parents and moved to Israel at age 7. (Courtesy of Showtime)
Advertisement

(JTA) — Since the Showtime docuseries “Couples Therapy” premiered, some might call its psychologist star Orna Guralnik the world’s therapist.

“I’ve become something,” she corrected, via Zoom. “I don’t know what to call it, but people write to me a lot, from all over the world.”

In the series, the Jewish Israeli-American psychoanalyst counsels real couples navigating many complex issues: infidelity, alcoholism, sexual and racial identities, and the intense stress of the COVID-19 pandemic, to name a few. Though the concept of watching real couples in real therapy sessions sounds like overly-dramatic reality TV, the New York-based show avoids the usual pitfall by adopting the more nuanced sensibility of a documentary. The proof is in its rave reviews — the first season earned a coveted 100% approval rating on the Rotten Tomatoes critic aggregation site.

Its second season saw couples through the first year of the pandemic, through lockdowns and remote therapy. A third season of “Couples Therapy” is premiering May 13, at a time when couples have emerged from the worst of COVID but are reckoning with the dynamics of the precarious present (see: climate change, a new Cold War, etc.).

The show has been licensed to other countries, including to the Israeli network Kan. It’s a natural fit in Israel, the country that birthed the therapy drama “Betipul,” which became HBO’s “In Treatment.” But unlike those shows, “Couples Therapy” is not fiction, and the therapist’s own needs and desires do not dramatically intermingle with those of her patients. Instead, the couples undergo a real therapeutic experience and often profoundly change.

Giving psychotherapy a better onscreen reputation was a prime reason that Guralnik decided to participate in the series in the first place.

“When people write to me, I don’t think it’s about me personally, I think it’s the function the show provides,” she said. “People actually have a therapeutic experience.”

Guralnik has much in common with the famous couples psychotherapist Esther Perel: Both are Jewish New Yorkers with Israeli-European backgrounds who have become well-known for their media portrayals of real therapy. But while Perel focuses on the podcast “Where Should We Begin,” the audience can both hear and see Guralnik in action on screen, where she comes across as both cerebral and warm, probing and serious. She’s an expressive listener, her eyebrows constantly raised above an intense gaze. And she’s no frump; with her leather bracelets, visible tattoos, and funky structural tops, her look could be described as rockstar intellectual chic.

With perfect English that has a hint of an untraceable accent, Guralnik is a true Israeli-American mix. Born in the United States to Israeli parents, she moved to Israel at age 7. There, she completed her army service and studied film at Tel Aviv University.

“I started off thinking I might want to be a filmmaker. But I kept making all these weird experimental kinds of films that nobody would ever want to watch. And yet, decades later, here I am working with the best filmmakers and it’s so much fun!” she said.

Afterwards she returned to the States where she completed a PhD in clinical psychology and started a family. After a brief detour into tech, she undertook 10 years’ worth of psychoanalytic training with a specific focus on couples.

Josh Kriegman, one of the creators of “Couples Therapy,” said that finding a therapist for the series was challenging.

“That was a long and arduous process of trying to speak with basically every therapist in the New York tri state area — which is quite a crew,” he said wryly. “When we met Orna, the air crackled. We knew this was our person.”

The child of two therapists himself, Kriegman explained that the show was conceived as an experiment, an attempt to capture authentic therapy on screen.

“In addition to Orna’s brilliance, her expertise, her charisma and her insight — all the things that make her a really remarkable therapist — she also isn’t that interested in being on TV. I think that underlines the authenticity. It’s a therapy-first endeavor,” he said.

Below is an edited conversation with Guralnik, including how her Jewish identity prepared her to be a therapist and her advice to couples today.

JTA: What did you think when you were approached about this show? Did you have reservations? What made you want to participate?

OG: I had intense reservations. When I first talked to them, I thought I would probably enjoy consulting on the show because of my background in film. And like many of my colleagues, I was really irked by the way psychoanalysts are typically portrayed in the media. There’s this very intense negative transference towards psychoanalysts. In film and TV, often there’s a deep suspicion about the motivation psychoanalysts have. I think it’s especially because of the kind of blank screen neutral stance that analysts take that invites a lot of projections, and those are typically pretty paranoid projections; this idea that analysts are really out there to exploit their patients. They either want to sleep with their patients or they’re falling asleep. When really it’s a deeply ethical practice that people train for decades to do and commit their lives to. So I felt motivated to have an impact.

There’s something similar between performing and therapy, where you are both inside of the experience and outside looking at it at the same time. Does the fact that there’s a camera change anything about that dynamic? Are you more aware of performing?

It does change things but not the way you’d expect. People ask me if I’m self conscious. I’m not self conscious. I’m not there thinking “how do I look?” But normally when you practice you feel like you can fix things in the next session, there’s a process. With the cameras rolling it feels more like, it’s now, there’s no tomorrow. This is not a dress rehearsal. So there’s an intensity to the work that feels different from regular practice.

Psychoanalysis has a deep Jewish origin. And therapy in the media does as well – from Hagai Levi’s “In Treatment” to Esther Perel’s podcast “Where Should We Begin.” Like you, Esther Perel is a Jewish woman, her parents were Holocaust survivors, and she comes from a mix of countries. Do you have thoughts about these elements? How do you think about your Jewish identity?

I have certain thoughts about it.

First of all, the Judaism that I relate to and grew up with has to do with the role of the Jew in the global collective network of humanity. The Jew has taken on a certain kind of role of wanderer, a sort of witness accumulating trauma and trying to process it. You’re always in the process of thinking historically about things, what happened, what’s going to happen? There’s a lot of history and a lot of trauma that needs to be processed. There’s this very deep concept of tikkun [repair] which is kind of bred into Jews, and Israeli Jews for sure. There’s an ongoing calling to heal, fix, make better. I think many religious practices have that element in them, but it’s certainly strong in Judaism.

I was raised in a super secular family that is also very Israeli identified. My parents were born on the dawn of the new state of Israel. They have very strong Zionist and socialist identifications. So there’s a certain kind of secular, spiritual ideology that goes along with that. My parents moved back and forth between Israel and the States, and they still live on both continents. They’re sort of Jewish wanderers forever. And I think in the process of growing up in between cultures — I live both in Israel and the United States, and I lived in Europe — you’re always on some level watching, observing, and trying to make sense of what you’re seeing. This is good preparation for being an analyst.

It also translated into a particular interest that I have in academic work about the seam between individual psychology and collective ideology, and how the two infiltrate and influence each other. A more classical analytic approach sees the individual psyche as very separate from culture. In my particular school of thought, culture is always already there, and individuality is something that comes out of collective ideology.

In this pandemic, we all need therapy. We’re all traumatized in different ways and to different degrees. Do you think that watching this show creates a kind of vicarious therapeutic experience for the viewer?

Yes. I get a lot of feedback from viewers from all over the world. I think watching the show is different from reading a book that teaches you how to relate to your partner differently. I think good TV, like good literature, gives people a space where they can imagine themselves into the shoes of someone else. It’s like a rehearsal. It’s the way play prepares us for the real experience. The participants in the show are incredibly courageous and generous. They’re giving the audiences the option to jump into their shoes and go through their experience with them. When you read a really good novel, you’re changed, right? Because you’ve gone through what the characters in the novel have been through and it changes you. It’s not like doing therapy yourself, but there is kind of an intermediary space there that is hugely influential. It’s important for people, especially now during the pandemic, when people are both in so much distress and kind of ongoing agitation and isolation.

As we go into another year of dealing with heightened circumstances, what’s your advice to couples about how to cope?

What I have seen is that being locked down together [during covid] certainly exacerbated whatever tendency a couple already had. If a couple tended towards alienation, they’d be more alienated. If they tended to function well together, they would function incredibly well together. If their method of being a couple was by processing a lot together, they would do more of that because they’re locked down together. So in a way, it pushed every couple to just be more of their own thing.

My take on what makes things easier for couples and families is to be really mindful of boundaries and space. Create boundaries, respect boundaries, even artificial boundaries. Create space because there’s so much mashed togetherness in a state of anxiety that I think is adding distress rather than helping. That would be my prime advice.