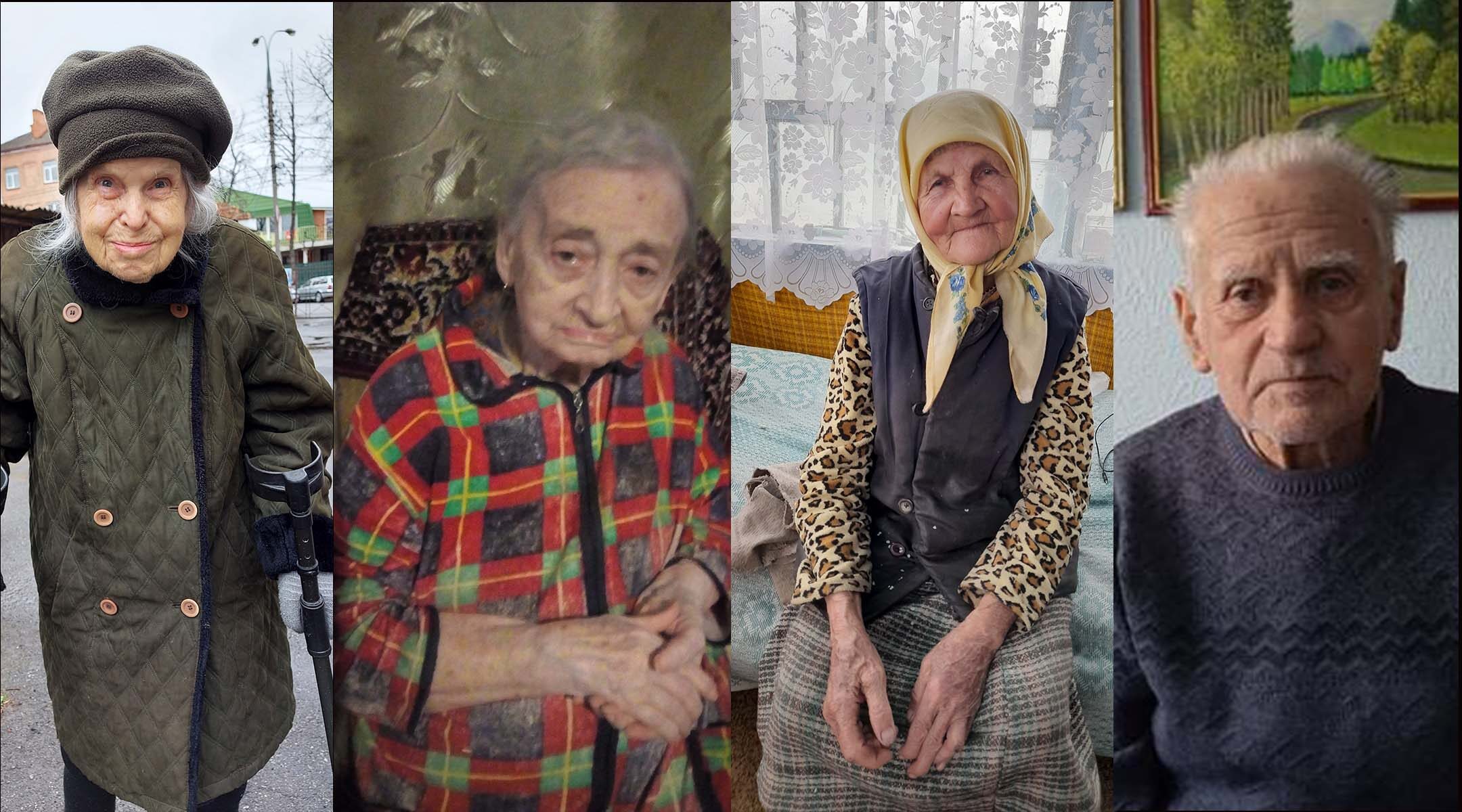 From left: Lidia S., Olympiada D., Aleksandra B. and Aleksander S. are among 15 Ukrainians named "Righteous Among The Nation" who helped save Jews during the Holocaust who were still living in Ukraine when Russia invaded. (Courtesy of The Jewish Foundation for the Righteous)
Advertisement

(JTA) — After Russia invaded Ukraine early in the morning of Feb. 24, millions of Ukrainians suddenly had their lives upended. The Jewish Foundation for the Righteous was concerned with 15 of them.

That’s how many Ukrainians remained alive from the foundation’s tally of “Righteous Gentiles,” non-Jews who risked their own lives to save Jews during the Holocaust 80 years ago.

The foundation doles out money to people certified to have helped Jews worldwide each year and had sent the first installment of $1,000 in early February. But it quickly became clear that the elderly Ukrainians couldn’t wait until later in the year for their next check.

“We are at war,” read an email delivered within hours of the invasion from the family of one 93-year-old. “People are leaving their homes looking for shelter [and] they are left without water and food. Shops are closed. Everyone is leaving for safe places indefinitely. If there is any way to help our family financially, we will be very grateful to you. Forgive us. With best wishes, Oksana’s family. Peace to all of us…”

Stanlee Stahl, the foundation’s executive vice president, quickly shared the email with her board and it agreed to fast-track the rest of the year’s funding — $2,000 each — to the 15 rescuers in Ukraine.

That decision set off a feverish effort to transfer cash across international borders at a time of massive upheaval. The foundation needed to find people who weren’t necessarily where they always had been, to navigate around disruptions in Ukraine’s banking and communications systems, and to verify that the money was going to the right place.

First, the foundation realized it needed to reach families by phone, because its typical mode of communicating by email did not feel reliable. But because of the decreasing number of living rescuers, the group no longer had a Russian speaker on staff. So it sought a Russian-speaking volunteer to call the rescuers for whom it had phone numbers.

When the foundation announced its need, Dimitri Zolotkovsky, an accountant in New York City who grew up in Kyiv, learned about it from his wife and volunteered.

“I jumped at the opportunity,” he said. “It aligned with my values. We all have families who lived through those times. I have a friend whose grandma was saved by a Belarusian guard who pulled her aside and saved her from the Nazis. These stories are an integral part of my childhood.”

Zolotkovsky, 50, said he was able to speak directly with a number of the Ukrainian rescuers and that some of the conversations were “heartbreaking” and others “very encouraging. … Every time I speak with them or their families it is like touching a piece of history. I don’t have memories of the war but it brings a lot of connection. My grandfather and grandmother fought Nazis. My father’s relatives barely escaped Ukraine before the Nazis occupied it.”

After speaking with the Righteous Gentiles — each of whom has been verified and recognized by Yad Vashem, Israel’s Holocaust memorial — the foundation prepared to send the money as it normally does through Western Union, which has offices throughout Ukraine.

But typically, each rescuer is sent a form each April 1 that he or she is asked to fill out along with their May or June pension statement and a notarized affidavit that must be returned by July 1. Those affidavits constitute proof that the rescuers are alive — a requirement that Stahl said exists in both her foundation’s funding program and the one in Germany that distributes funds to living Holocaust survivors.

The foundation wasn’t going to ask elderly Ukrainians to find a notary in wartime. So instead it asked rescuers to submit “proof-of-life” photos: pictures of themselves along with a copy of that day’s newspaper, a time stamp taken by the camera or a television displaying the date and time.

One of the Righteous Gentiles died March 31 in Kyiv before Zolotkovsky had a chance to reach her. She was 97 and Stahl said that although she died of natural causes, “I’m sure the Russian bombing did not help.”

But Zolotkovsky was able to reach all of the other rescuers. Within a short time, each had been sent the $2,000, equivalent to more than a month’s salary for the average Ukrainian and more than the average monthly pension for each of the rescuers, $110, would bring in over the course of a year.

“We have a responsibility on behalf of the Jewish people to make sure that these Righteous Gentiles are taken care of in their time of need,” said Harvey Schulweis, the foundation’s chairman. “We have a moral and ethical responsibility to these men and women to be there for them when they were there for Jews during the Holocaust.”

More than 4 million people fled Ukraine’s borders in the weeks after the Russian invasion, and millions more were displaced internally as Ukrainians relocated to avoid fighting. For the elderly rescuers on the foundation’s registry, that was not a possibility.

“Most of the rescuers can’t leave because they are too old and too sick,” Stahl said.

The exception was Lidia S., 97, who drove with her daughter from Kyiv to Poland. They then made their way to Switzerland and are now staying with her grandson. The $2,000 was sent to her in Switzerland.

Others relocated within the country. The daughter of Alekander S, who will be 92 in June, wrote that they are now in western Ukraine having “miraculously escaped from the bombing. We fled in what we were wearing. We left everything at home, took only documents, cards and a computer. We are now safe 1,000 km from Kherson. … We were taken in by my husband’s sister. How long we will live here we don’t know.”

The granddaughter of Olympiada D., who will be 100 in December, wrote from Odesa to say thank you for the money and to also send a photo to demonstrate proof-of-life. The Yad Vashem database contains a listing for an Olympiada D., who was 17 when she worked with her father to shelter and feed Jewish friends of their family, including their baby, when Jews from Odesa were being deported to concentration camps.

“Please excuse the quality of the photo,” she wrote. “After the air raid we do not turn on the big light.”

The Jewish Foundation for the Righteous was founded in the late 1980s and over the years it has financially supported 3,600 Righteous Gentiles in 34 countries. At its height, it supported 1,850 rescuers, a number that has dwindled over the years to 134 today in 14 countries. It sends them about $800,000 annually, which includes Christmas gifts that last year amounted to $2,500 each. That tally has increased in recent years as the needs of the rescuers for medicine, home health aides, warm clothing and home heating fuel have grown.

The reports to the foundation from the families of the Ukrainians it supports suggests that even as the number of rescuers approaches zero, the spirit of why they were recognized may well live on.

The grandson of Aleksandra B. wrote from Vinnitsa to say that he took her to a village 100 kilometers away that is “relatively safe. … I sent you her photograph to confirm that she is still alive.”

After receiving the money, he wrote that he bought “necessary medicines for my mother and took a hearing aid for testing so that she could hear. … When she receives help from you, tears of joy appear in her eyes.”

He added, “I am also taking care of the graves of the people our family saved.”