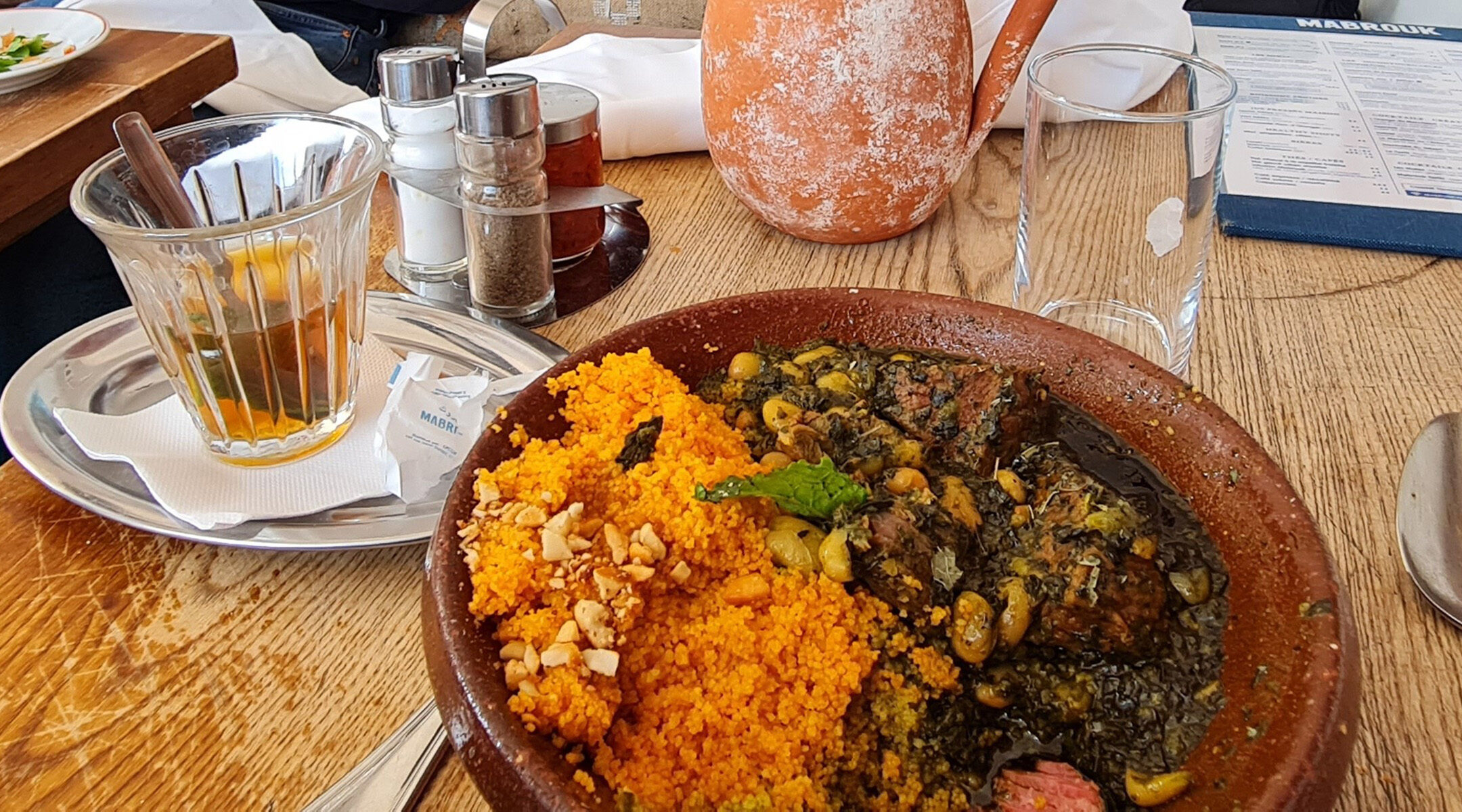 PARIS (JTA) — As children in Paris, Alexandre David and Alexis Memmi looked forward to summer every year when they would relocate to their grandmothers’ homes in Tunisia.

Summers there meant frolicking on the beach under the hot sun, playing on the streets of the Jewish quarter of the capital Tunis, where their families lived — and plenty of glorious Sephardic dishes that those grandmothers made with recipes handed down and perfected over generations.

There, the childhood friends made a vow.

“We said that as soon as we grow up we’d open a restaurant together and serve those dishes in the center of Paris,” David, 35, told the Jewish Telegraphic Agency.

It took a little longer than they expected, but that childhood dream is finally a reality at Mabrouk, a kosher-style restaurant they opened in 2019 that aims to make Sephardic Tunisian dishes accessible to the modern Parisian diner.

Mabrouk, which has received glowing reviews in major publications, including Elle magazine and Nouvelles Gastronomiques, is part of a growing trend of North African cuisine in France. While couscous and merguez have been available in immigrant communities and niche eateries since immigration from North Africa first swelled in the 1950s, the new generation of restaurants offer a wider array of dishes, aimed at a broader cross-section of eaters.

This trend includes 1000 & 1 Signes, which opened in 2013 and whose mission statement includes supporting deaf people, and Kous Bar, a well-designed eater where customers choose their own couscous toppings as one would at a salad bar. 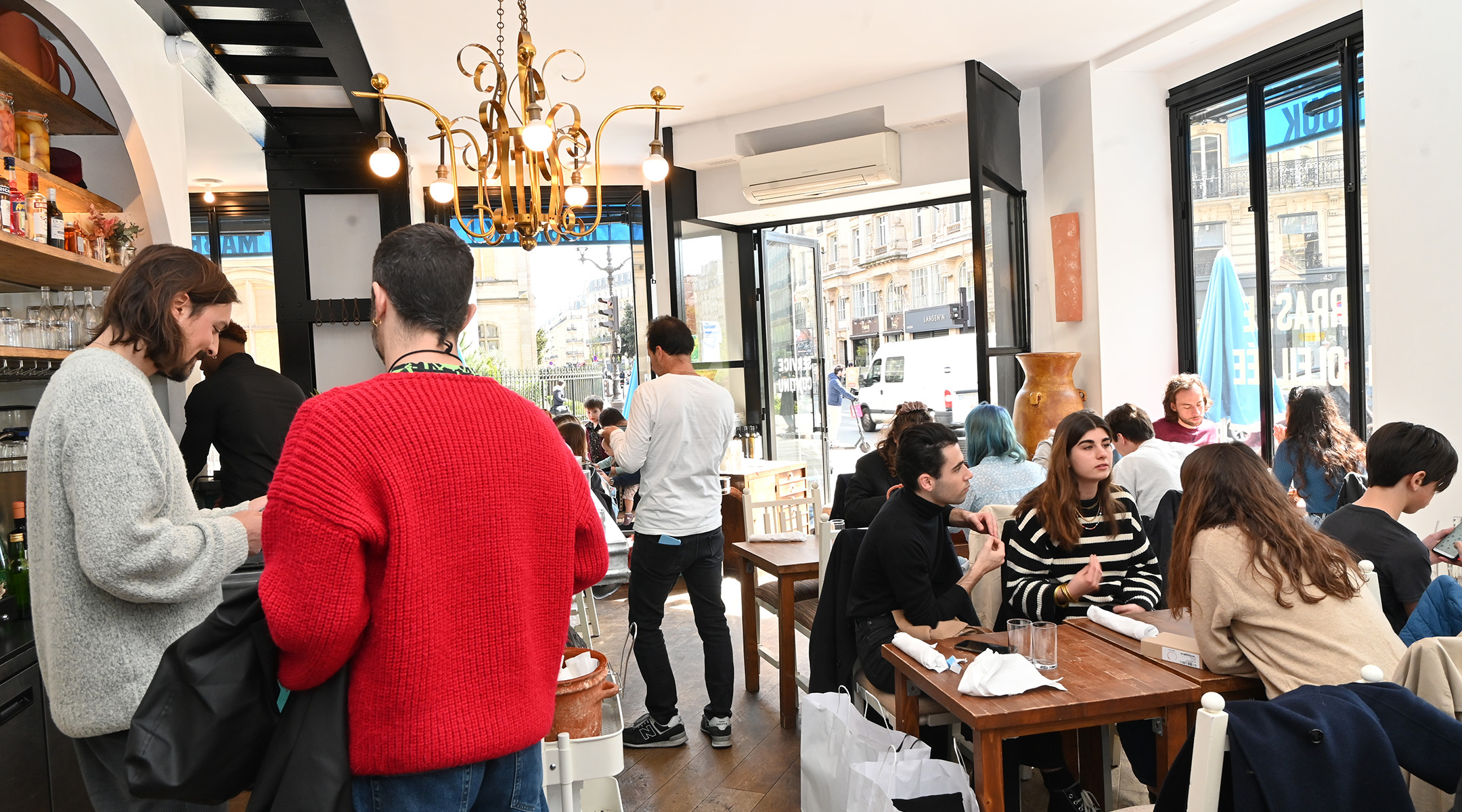 Mabrouk looks nothing like the typical couscous eateries that dot Paris. (Cnaan Liphshiz)

But Mabrouk may be the only outspokenly Jewish player in this culinary new wave, with a menu that reflects the habits and sensibilities of North African Jews. Mabrouk diners can order pkaila — a typically Jewish Tunisian dish that some say is a local variant of cholent — and sabayon, an egg-based ice cream popular with observant Jews because it contains no dairy, facilitating the observance of the prohibition on mixing milk with meat. At Mabrouk, it is served with lemon zest that contrasts exquisitely with the yolky creaminess.

The menu distills the dishes that his and Memmi’s grandmothers served to their families in Tunis, said David, who has been waiting tables during the lunch rush hour lately because of labor shortages due to COVID-19.

One dish, a starter called Boutargue Memmi — a slab made up of salted and cured fish roe — is named for the grandmother who inspired it.

Alexis Memmi, 32, a self-taught entrepreneur who skipped university and had worked for several years at an Asian restaurant called Beau Café in New York, where he began working as a waiter and eventually as the manager. (It has since shut down.) His childhood friend Alexandre also went into the food business, running a brasserie in the Marais, historically a heavily Jewish district of Paris.

The two friends, who are both secular but have “a lot of respect for Jewish traditions,” as David described it, went into business together at Mabrouk immediately after Memmi’s return from New York in 2018.

Another dish at Mabrouk, the Djerba Bowl, is named for the island in southern Tunisia that for centuries had been a center of Tunisian Jewry. Served poke-style, it contains a tartar of bream fish, peas, beans and cauliflower served on semolina, rice or even quinoa, which is rarely found in other Tunisian restaurants.

And a third, the AbitBowl, combines spicy meatballs (keftas), sesame cream and caramelized onion. Its name is a play on words referencing Abitbol, a typically Jewish Sephardi last name common in North Africa, France and Israel.

The meat at Mabrouk is certified kosher and the methods of preparation generally observe kashrut and also halal rules, but the restaurant is neither certified nor supervised for kashrut or halal, David said. Obtaining a kosher certificate would require closing on Friday evenings and Saturdays, which would mean changing the affordability at the core of the restaurant’s business model. (Main courses cost between $14 and $22.)

But it would also change something about the place’s character, David said.

“We want to leave communitarianism. Mabrouk needs to be a place where Jews, Muslims, Christians and Budhists can all call their own,” David said.

The owners neither hide nor highlight the restaurant’s Jewish aspects, he added.

“Our mission was to take Sephardic Tunisian food and to make it 2.0. To make it trendy, to make it hipster-like,” David said. “And we do this by taking the dishes and adapting them to the cultural codes of the French restaurant culture.”

Mabrouk — whose name is an Arabic-language greeting used to congratulate someone on an achievement — looks nothing like the typical couscous eateries that dot Paris. The interior design is heavy on Mediterranean blue and mosaic motifs, but otherwise it looks and sounds like a typical brasserie, featuring none of the traditional kitchenware or background music commonly used in traditional couscous restaurants.

“The food is authentically Tunisian, authentically Sephardic, but this is a French restaurant in the middle of Paris,” David said. 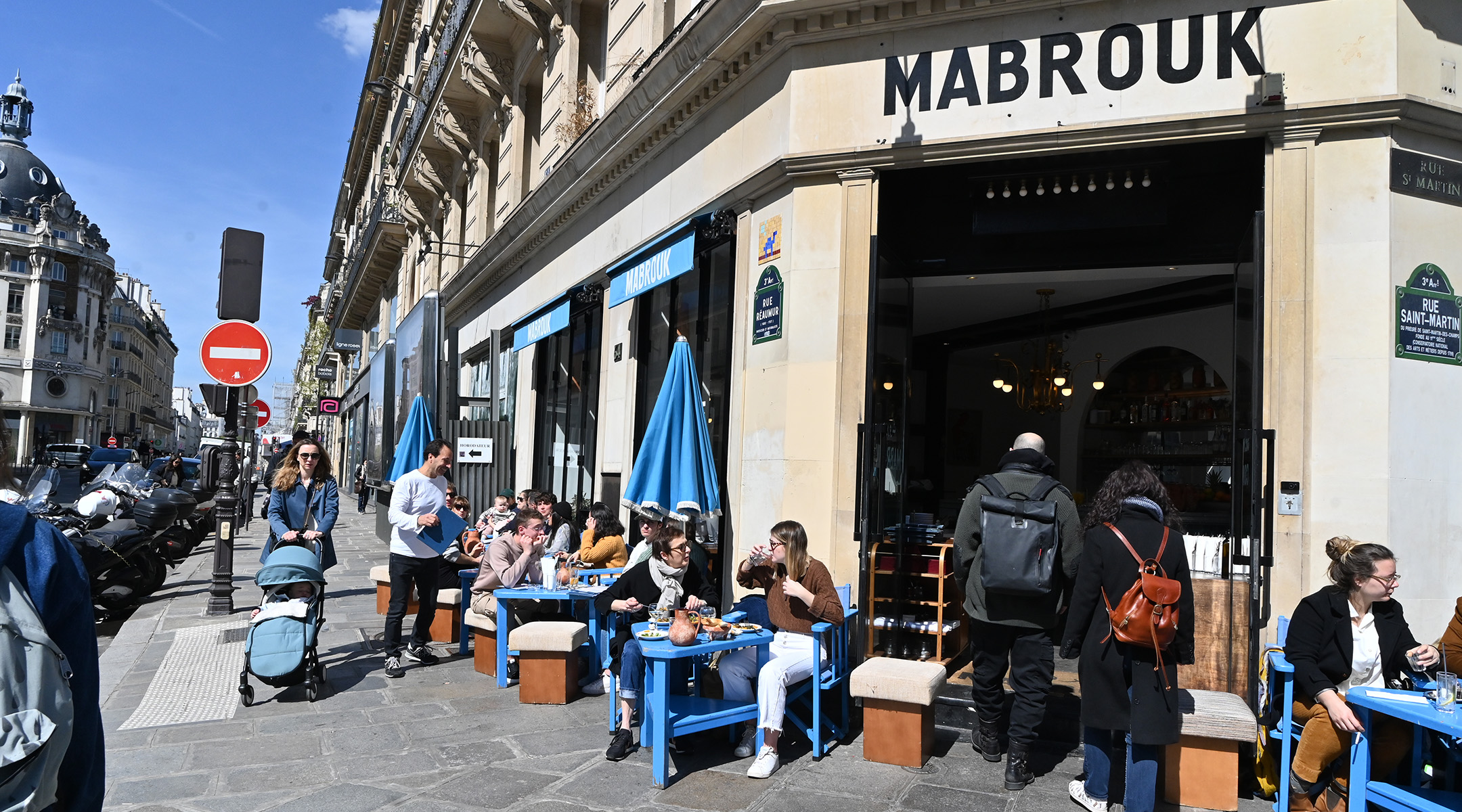 The main design inspiration for Mabrouk is the quintessentially Parisian Café de Flore, one of the city’s oldest and best-known cafes, famous for being a favorite hangout for intellectuals and artists such as Georges Bataille and Pablo Picasso.

“At no point did we wish to make the patrons feel like they’re in Tunisia. That’s unnecessary,” David said.

Laura Ventura, a regular at Mabrouk and herself a restaurant owner in Paris, said the understatedness of the vision is exactly what draws her.

“It’s different from other couscous restaurants because it’s not kitsch. It’s Jewish Tunisian without reminding you constantly that this is what it is,” said Ventura, who is a Sephardic Jew of Tunisian and Moroccan descent.

“I love the food, which I know from my own home, and I love that it’s in a restaurant that speaks to me in the center of Paris, where I work,” she added.

“It’s a very welcoming place, I like hanging out with friends there, and I like that I have dishes that speak to me culturally,” she said, adding that while she loves the pkaila, her favorite dish is the mechouia, a grilled vegetable salad rich with eggplant and garlic, sometimes served with a cooked egg. “I don’t observe halal and I don’t mind eating kosher or Jewish food, I’m quite oblivious to all that, frankly.”

For Mabrouk to succeed in Paris, the grandmothers’ recipes did need some adjustments.

“We needed to lighten things up,” David said, noting the oiliness of traditional Tunisian food. David’s grandmother, Aline, 85, “begins cooking by pouring olive oil generously into a pan. Only then she thinks about what she wants to cook,” her grandson said.

To help with that task, they hired Daniel Renaudie, a French-Israeli former journalist who has become a well known chef in Paris.

David and Memmi knew they hit the mark when even Japanese tourists, who David said tend to be averse to fatty foods, came away satisfied. “When we saw that, we thought: mission accomplished,” David said.

Mabrouk is doing very well generally. It’s often packed to capacity, with patrons standing in line to be seated. It has the owners thinking about opening up additional franchises: first in New York, then London and then perhaps in Tel Aviv or Jerusalem.

The COVID pandemic, which forced the restaurant to shut down for months shortly after it opened, made David and Memmi wonder whether they had chosen the wrong time to realize their dream.

“We really wanted to become ambassadors of Tunisian Sephardic food in the broader French society because we’re passionate about it,” David said. “It’s great to see that it’s really taking off.”