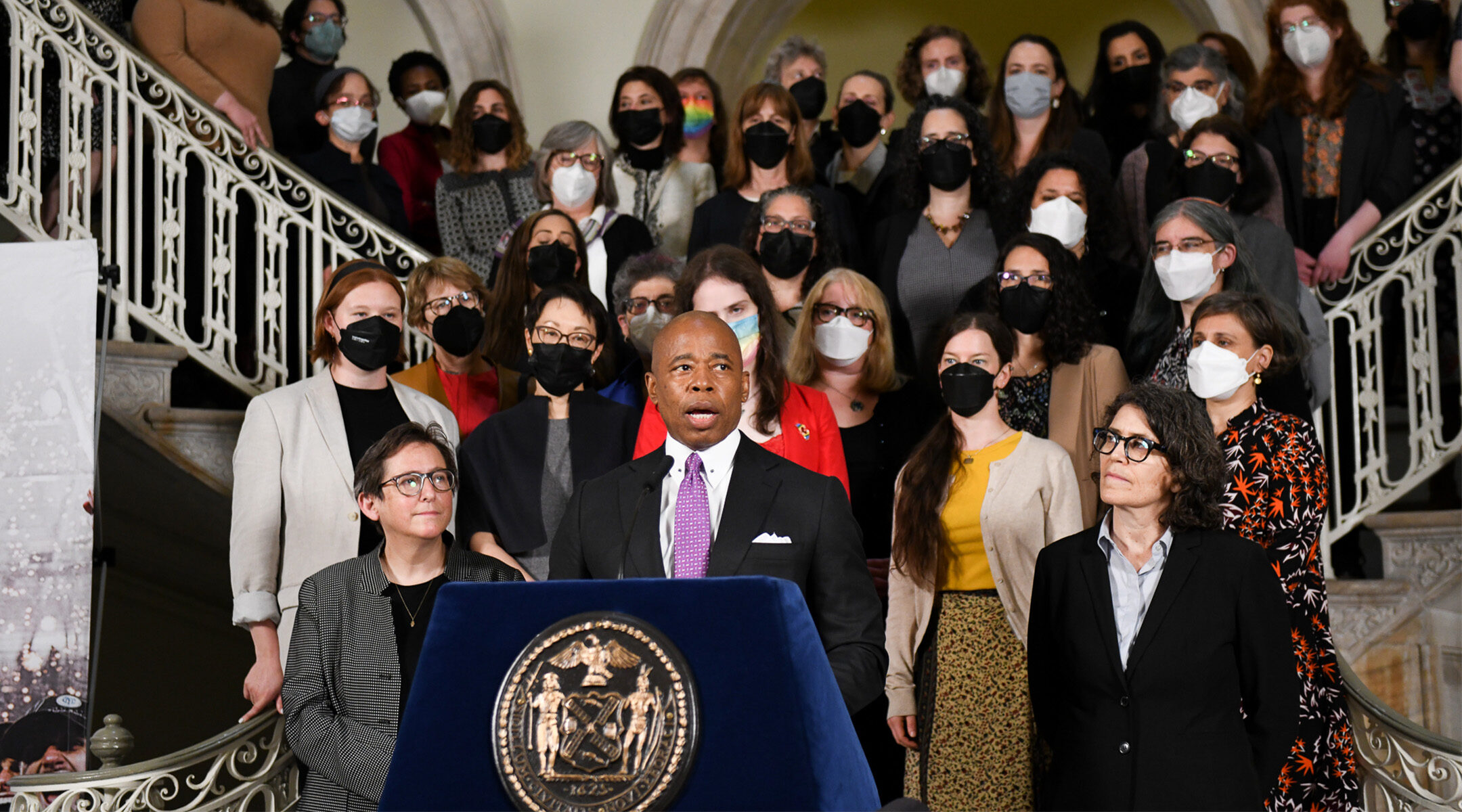 The clergy sought the meeting earlier this week out of concern that the Orthodox Jews Adams regularly consults don’t represent the political or religious diversity of the city’s Jewish community.

At a press conference following the 45-minute meeting at City Hall, however, Adams said the women clergy raised the same concerns he’s heard from the Orthodox community.

“They want safe streets,” Adams said. “They want to be able to have housing. They want to make sure their children are educated. They are concerned about the environment. There may be different ways in [of] accomplishing that, but we all want to get to the same destination.” 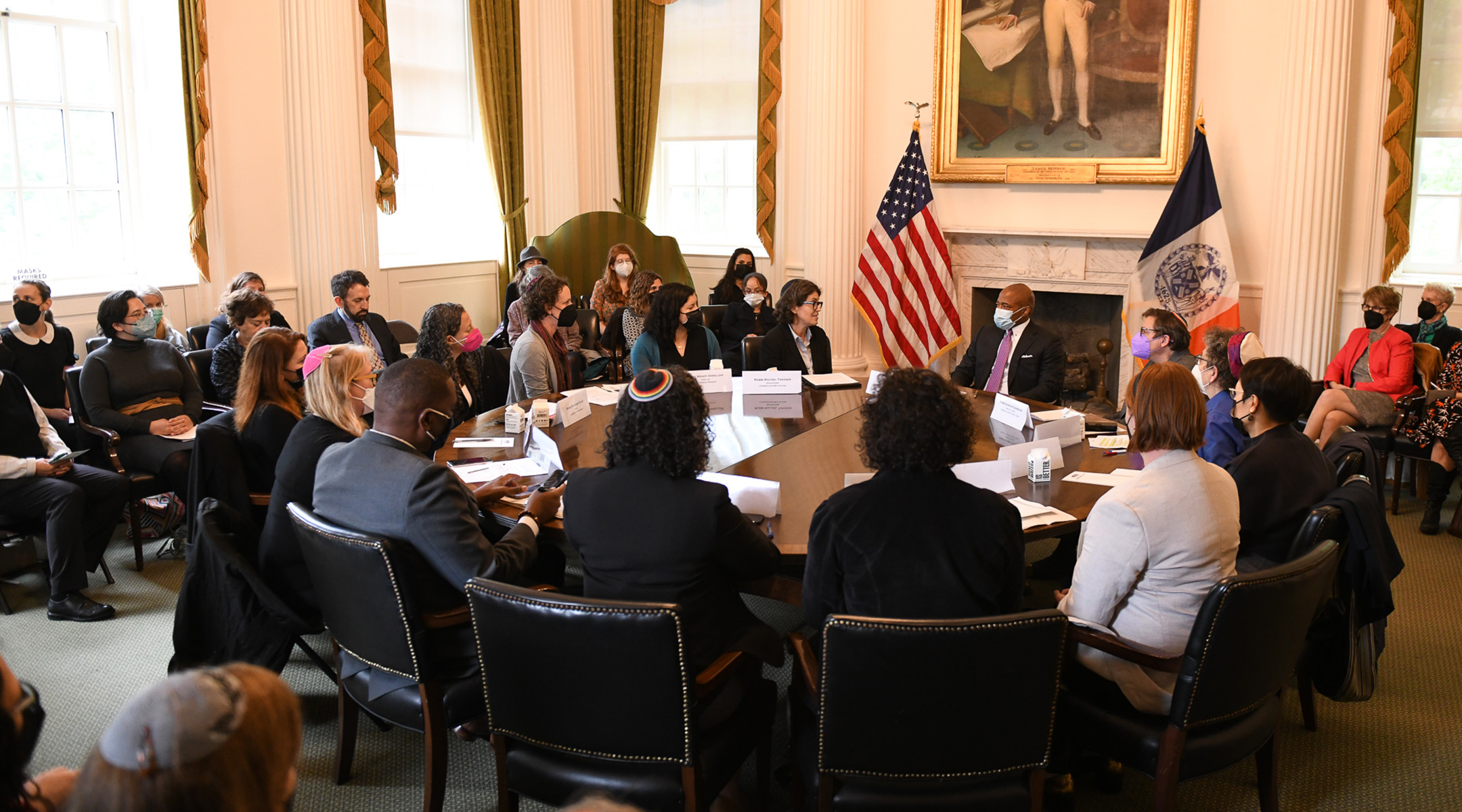 Noting that it’s not always easy to “come together,” Adams said that “we have to start communicating and talking, and I’m going to do that.”

“I’ve been criticized for meeting with those who are diametrically opposed to what I believe, but I’m going to continue to do this,” he said. “This is just the beginning.”

Rabbi Sharon Kleinbaum of Congregation Beit Simchat Torah, an organizer of the meeting along with the New York Jewish Agenda and Rabbi Rachel Timoner of Congregation Beth Elohim in Park Slope, said the meeting was important to show Adams that not every rabbi or Jewish leader is “a man with a beard.”

“They are all different,” Kleinbaum, who has led her LGBTQ synagogue in Manhattan since 1992. “They are people of color. They are lesbian, bisexual and transgender.”

“He listened to us,” Timoner said after the meeting, which she called “productive and respectful.” “He was taking notes. He was asking questions for clarification. He was clearly asking us to partner with him.”

Kleinbaum, who has worked with City Hall for decades as a rabbi, said that the mayor was “sincere about building relationships.”

“It was not an adversarial conversation,” Kleinbaum said. “We were there to start a relationship. That’s the important thing.”

Rabbi @rtimoner said that this is the largest and first ever meeting of women rabbis and cantors with a mayor of NYC.

“This is the face of Jewish leadership in New York City,” Timoner said. pic.twitter.com/dgD7Ot8aIV

Timoner told the New York Jewish Week that the meeting was not about pushing Adams on particular issues, but instead on starting a relationship. “It’s important for him to hear the deep concerns of most New Yorkers,” Timoner said. “We represent that. We are second to no man, we are the actual faces of Jewish leadership in New York.”

“In particular,” she added, “the concern was that his administration was only consulting haredi [Orthodox] leaders, as if they spoke for the whole community.”

The women in attendance represented a cross-section of Jewish denominations, as well as all five boroughs of the city. Among them were Rabbi Angela Buchdahl of Central Synagogue, Rabbanit Bracha Jaffee of Hebrew Institute of Rverdale-The Bayit and trans activist and rabbi Abby Stein.

Adams had broad support from the haredi Orthodox community during his campaign for mayor due to his tough-on-crime policies and the relationships he had built over the years as Brooklyn borough president. At least three Orthodox Jews have been appointed to the Adams administration’s senior staff.

And yet, the majority of American Jews have consistently identified with the Democratic Party in recent years, while the Orthodox minority has leaned Republican. In the New York area, the large haredi Orthodox community often courts ties with and supports sympathetic Democrats.

Adams, who has tacked between progressive and conservative positions since taking office in January, won his election despite losing Manhattan, on average New York’s most liberal borough.