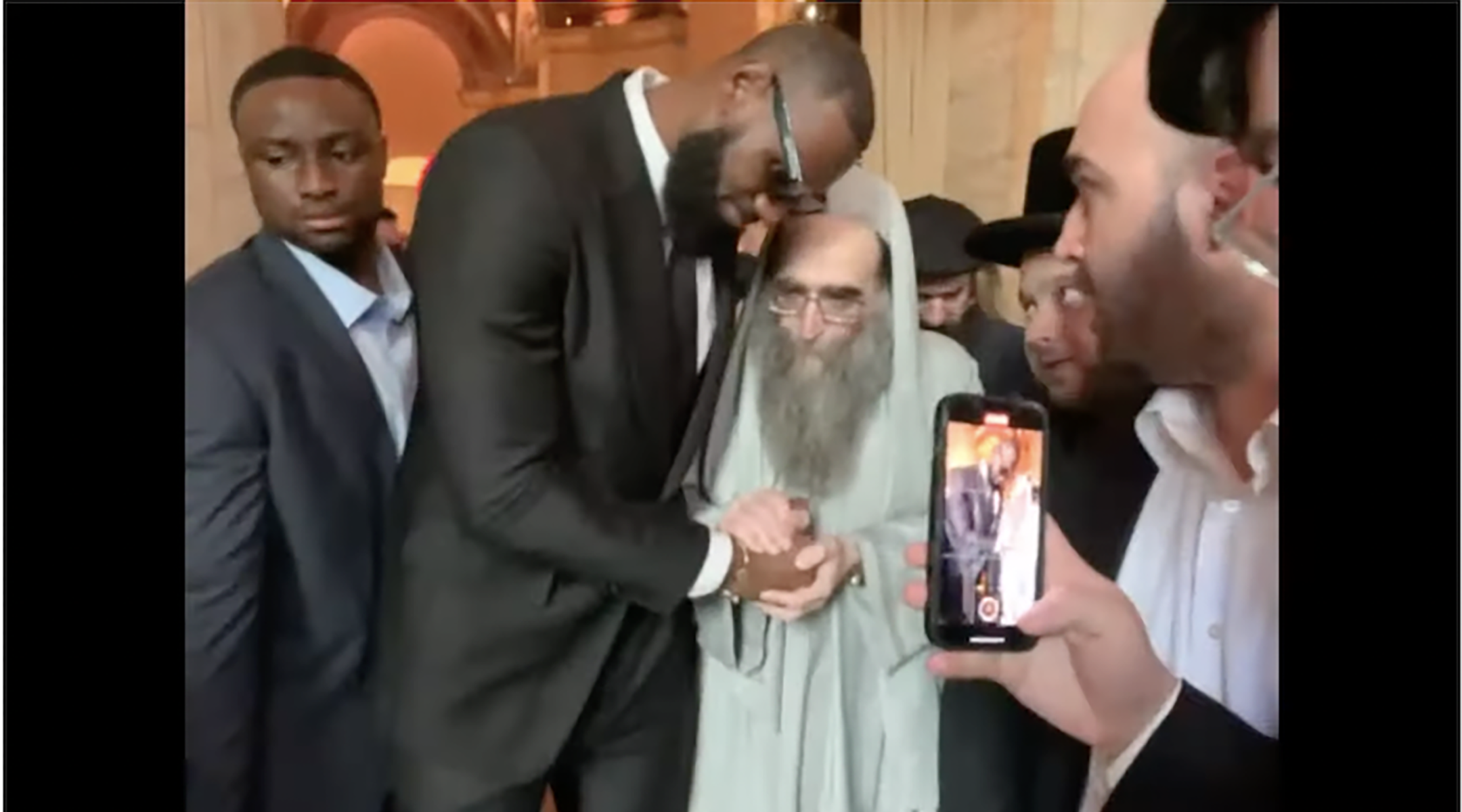 (JTA) — LeBron James likely draws attention at most weddings he attends. After all, the basketball superstar turned entertainment mogul is 6-foot-9 and one of the most recognizable sports figures of all time.

But he made an especially eye-catching entrance at a Jewish wedding on Sunday, holding hands with a well-known kabbalist rabbi who served a year in an Israeli prison.

The scene took place at the New York City wedding of Jeffrey Schottenstein — son of Jay Schottenstein, a billionaire who is chairman of the American Eagle Outfitters — and Ariella Boker. The Schottenstein family is based in Columbus, Ohio, and has long been close with James, who grew up in Akron and won an NBA championship with the Cleveland Cavaliers.

In 2009, James nominated Jay Schottenstein to the Time 100 list, noting the businessman’s philanthropic support of a translation of the Babylonian Talmud into English, Hebrew and French.

James has also been a fan of Jeffrey Schottenstein’s apparel brand TACKMA, which stands for “They All Can Kiss My Ass” and has been worn by stars across entertainment industries.

Both the Schottensteins and James also have connections to Yoshiyahu Yosef Pinto, a Moroccan-Israeli rabbi with a large international following who has in recent years overseen kosher certification in Morocco. In 2010, James reportedly sought ​​”spiritual guidance” from Pinto during “a ‘big merchandising meeting’ that took place on a private yacht,” according to TMZ. James then reportedly donated $100,000 to Pinto’s Shuva Israel organization, which included a yeshiva.

In 2014, Pinto was sentenced for bribing an Israeli police officer and served a year in prison. The police officer’s superior, who came under public scrutiny from Pinto’s followers, committed suicide.

Also in 2014, Pinto helped connect Michael Grimm, a former Republican congressman from New York, with some of his wealthy followers. Some of their donations — as much as $300,000 — were sent in illegal ways; Grimm would also wind up serving time for tax evasion.

On Sunday, James and Pinto looked as close as ever. Video uploaded to YouTube by Jewish Insider shows James holding Pinto’s hands and listening closely to the rabbi’s ear, before giving him a big hug.