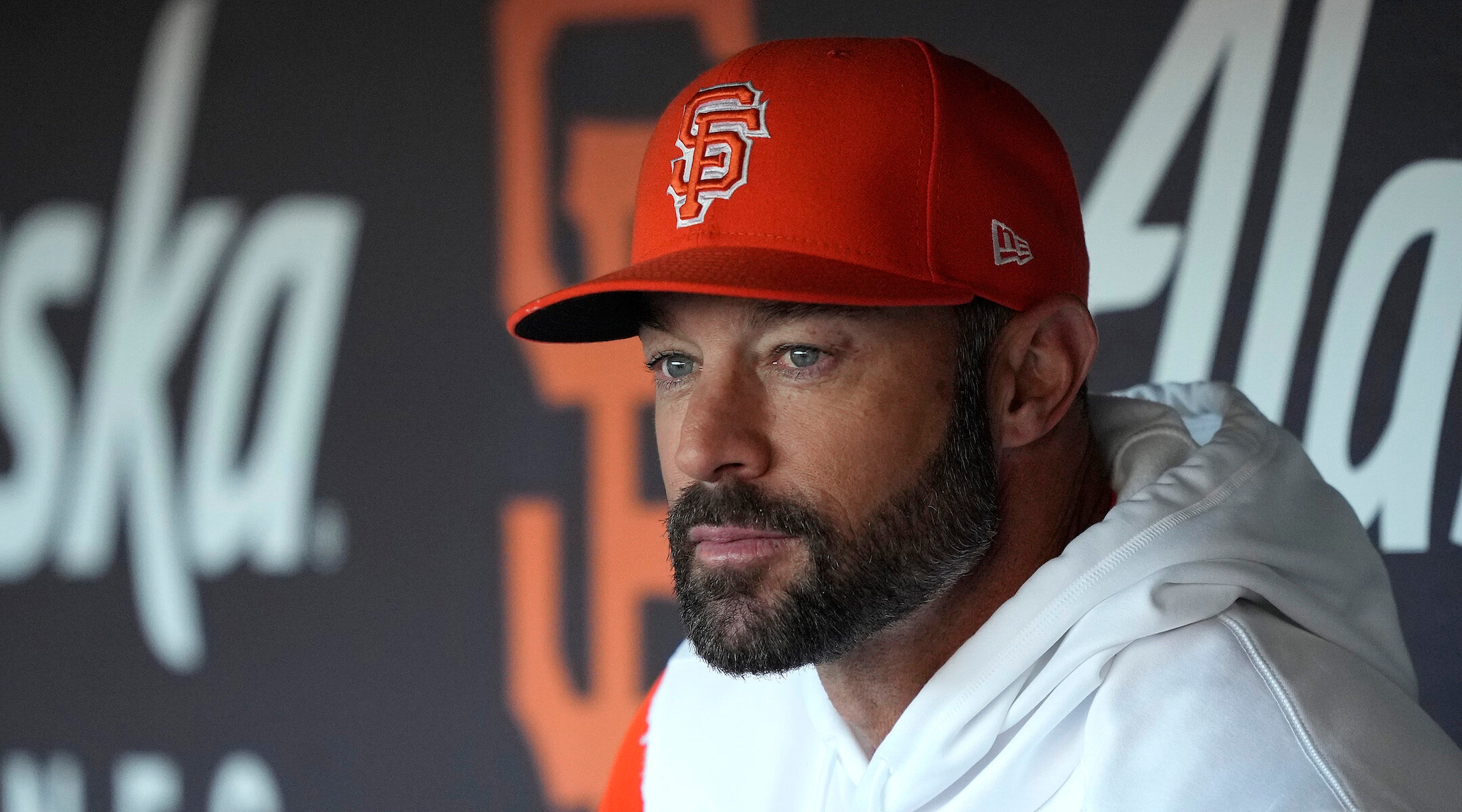 Gabe Kapler looks on from his San Francisco Giants dugout prior to the start of a game against the Colorado Rockies at Oracle Park in San Francisco, May 10, 2022. (Thearon W. Henderson/Getty Images)
Advertisement

(JTA) — In the summer of 2020, Gabe Kapler, then in his first season as manager of the San Francisco Giants, joined figures across sports in taking a knee during the national anthem to protest police brutality.

Now, two years later, Kapler has announced that he will not take the field at all for the anthem out of broad dismay over the United States’ direction, spurred by the mass murder of 19 children at an elementary school in Uvalde, Texas.

“When I was the same age as the children in Uvalde, my father taught me to stand for the pledge of allegiance when I believed my country was representing its people well or to protest and stay seated when it wasn’t,” Kapler wrote on his blog. “I don’t believe it is representing us well right now.”

In his blog post, he said he regretted participating in the rituals surrounding the national anthem, which he called “self congratulatory glorification,” before the Giants’ game on Wednesday, the day after the Uvalde massacre.

“We stand in honor of a country where we elect representatives to serve us, to thoughtfully consider and enact legislation that protects the interests of all the people in this country and to move this country forward towards the vision of the ‘shining city on the hill,'” Kapler wrote. “But instead, we thoughtlessly link our moment of silence and grief with the equally thoughtless display of celebration for a country that refuses to take up the concept of controlling the sale of weapons used nearly exclusively for the mass slaughter of human beings.”

Taking a knee for the anthem gained prominence as an act of protest across sports in 2016, when then-NFLer Colin Kaepernick made the gesture to protest police killings and racism. Kaepernick was cut from his team soon after — a move that he charged in a lawsuit represented retaliation by the league — and has not played football since.

Along with coaching the Israel team in the 2013 World Baseball Classic, Kapler visited Israel in 2017 and toured with the national team then, shortly before becoming the manager of the Philadelphia Phillies. Kapler — who has a Star of David tattooed on his right calf and “Never Again,” the Holocaust remembrance refrain, tattooed on his left calf — joined the Giants in 2019 after being fired by the Phillies. He was named National League Manager of the Year last year after leading the Giants to a historic season.

Kapler, who said he will take his protest day by day, joined his team for the anthem on Memorial Day on Monday.

“While I believe strongly in the right to protest and the importance of doing so, I also believe strongly in honoring and mourning our country’s service men and women who fought and died for that right,” he wrote on his blog before his team’s game against the Philadelphia Phillies.