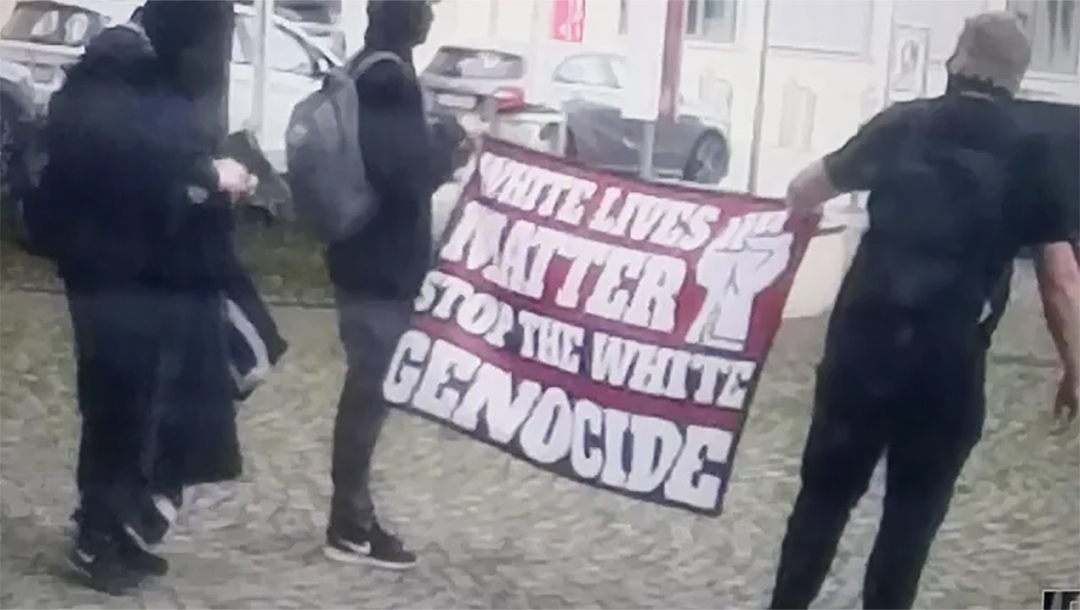 Men carry a far-right banner at an demonstration outside the synagogue of Ulm, Germany, June. 5, 2022. (Courtesy of the Jewish Religious Community of Württemberg)
Advertisement

(JTA) — Men flying banners with far-right symbols gathered outside a synagogue in Germany on the anniversary of its attempted torching, allegedly by a Turkish citizen.

Gathering June 5 in Ulm near Munich, about 10 men displayed one banner reading: “White lives matter, stop the White genocide.” Another banner depicted the black sun symbol, which is popular among neo-Nazis.

Local non-Jews confronted the demonstrators and made them leave the scene, according to T-Deutschland.

The date of the event was the one-year anniversary of the attempted arson at the synagogue, which authorities say was perpetrated by 45-year-old dual citizen of Turkey and Germany.  He poured gasoline on the facade and set it ablaze. Rapid intervention by neighbors and firefighters prevented the flames from spreading into the building.

The suspect fled Germany and is hiding in Turkey, which is refusing to extradite him.

T-Deutschland said this week’s demonstration may have been intended to celebrate the arson attempt. The local congregation’s rabbi, Shnuer Trebnik, did not rule out the possibility that the neo-Nazi gathering was to celebrate the actions of the Turkish fugitive. “We experience so many absurdities, it’s possible. They might have a common interest,” he told T-Deutschland. Far-right extremists are generally hostile both to Jews and to immigrants  from Muslim-majority countries.

Police are investigating the incident outside the synagogue.

In 2021, German authorities recorded 3,027 antisemitic incidents, a 29% increase over the 2,351 incidents recorded in 2020, a report by the Federal Office for the Protection of the Constitution said.

As in previous reports, the government report said that the vast majority of incidents were attributable to neo-Nazis. Leading watchdogs on antisemitism, including the Berlin-based RIAS, have disputed this assertion, which they say is based on faulty methodology in the government’s reports.