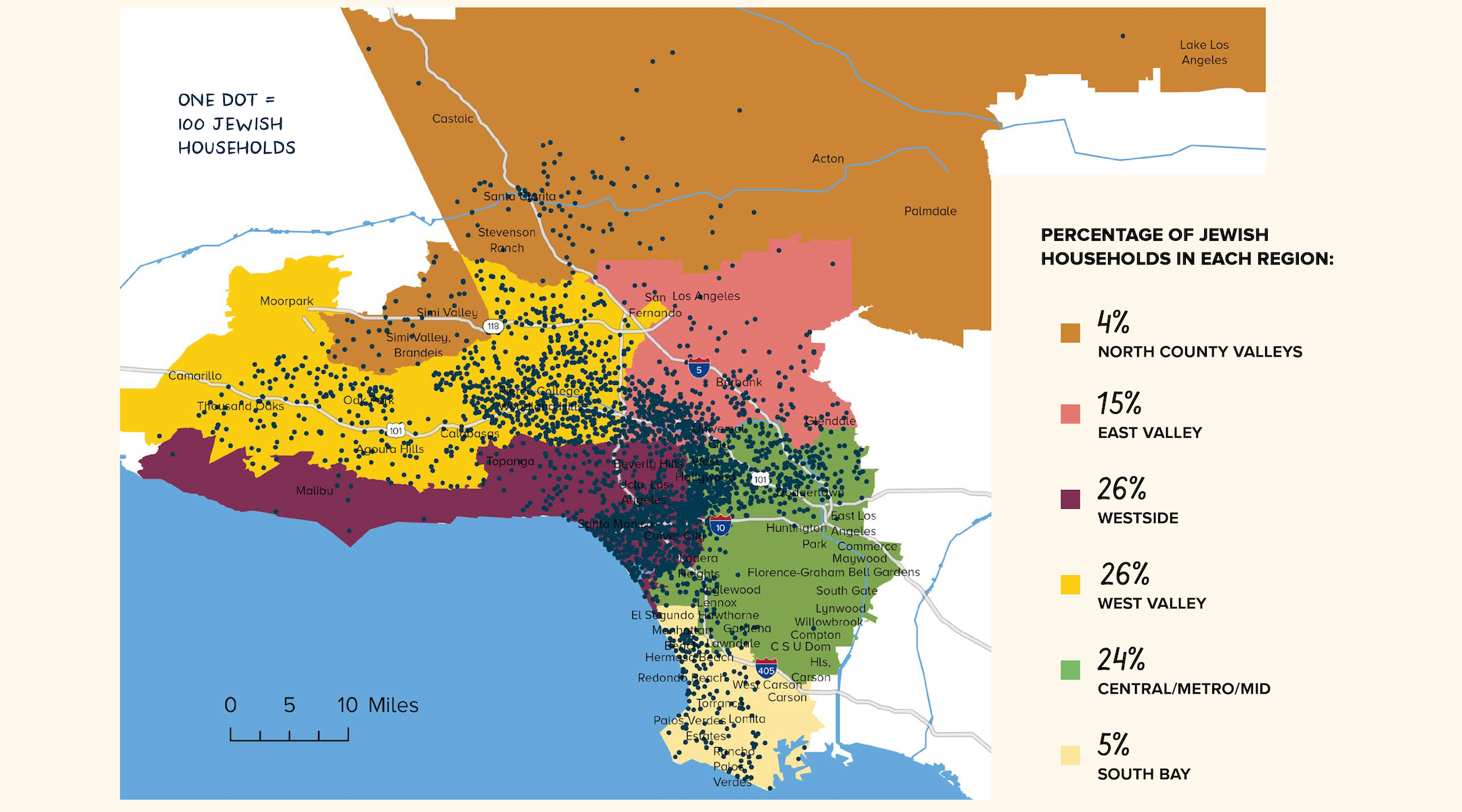 Map of Jewish households in Los Angeles, according to the new population survey (Courtesy of the Jewish Federation of Greater Los Angeles)
Advertisement

(JTA) – When the results of the new population survey of Jewish Los Angeles came in, Rabbi Noah Farkas was stunned by the data on Jewish identity and affiliation.

Like many community leaders, the CEO of the Jewish Federation of Greater Los Angeles has long heard warnings about a decline in Jewish involvement and a gradual shrinking of the community.

But the data told Farkas that the opposite was happening.

Younger Jews in the Los Angeles area might be moving away from the denominations that dominated in previous generations, but they are more likely than their elders to be engaged in Jewish life. That includes discussing Jewish topics, studying Jewish texts and consuming Jewish media. Young people in the survey are also more likely to mark Shabbat.

“What surprised me the absolute most is that a younger demographic is more engaged in Jewish life in almost every category than an older demographic,” Farkas told the Jewish Telegraphic Agency in an interview. “They might not be considered themselves Reform Jews, Conservative Jews, Orthodox Jews as denominational categories of identities seem to be fading, but they do Jewish activity by and large more than the people who are 55-plus. It was a total shocker to me.”

The Study of Jewish LA is the community’s first demographic survey in a generation. Spearheaded by the city’s Jewish federation and funded by an array of partners, the study was announced Wednesday and will be released in stages throughout the summer.

With an estimated 565,000 Jews living in 294,000 households in the area, the community has grown by 9% since the last survey in 1997. The area has the second highest number of Jews in the United States after New York City.

One particular focus of the study was on diversity of race, ethnicity, language and national origins. About half of Jewish households include someone, not necessarily Jewish, who was born abroad or whose parents were born abroad — chiefly from Latin America, Israel, Iran and the former Soviet Union. Nearly 20% identify as Sephardi or Mizrahi. About 6% identify as Jews of color, but for children the number is 9%, suggesting that the overall number will increase over time.

“While L.A.’s Jewry has been less white and Ashkenazi than other cities for decades, the future of Jewish Los Angeles is even more diverse,” Farkas said.

In line with Los Angeles’ overall geography, the Jewish community is spread out across a vast area. But in two areas where they are most concentrated, the western San Fernando Valley and West L.A., Jews make up about 25%of the population.

Health and well-being were another focus of the study, with mental health services identified as “one of the most significant needs in the community,” especially among young adults.

Meanwhile, a portion of the community is struggling financially, and an equal portion is wealthy.

The study divides the population into five categories of financial well-being. While only 1% percent said they “cannot make ends meet,” an additional 18% are “just managing to make ends meet.” About 60% have “enough” or “extra” money, while a fifth of Los Angeles Jews said they were “well off.”

The study is intended to serve both a general audience and leaders in the community, according to Farkas.

“We are providing tools to the Jewish community to know itself and to help institutions evaluate their work and think about who are our people, so we know how best to serve them,” he said. “In a data-driven world, we need good, relevant data to do this.”

While this survey examined Los Angeles’ unique population, there were two other major recent efforts at documenting the Jewish community in the United States. The results of these kinds of demographic studies can have political and other broad ramifications, as demonstrated by the 2020 Pew research study on American Jews, which found an increase in the number of Jewish Republicans. A survey from the Jews of Color Initiative found that 80% of the Jews of color who participated have experienced discrimination in Jewish settings.

Carried out by a research team from the Cohen Center for Modern Jewish Studies at Brandeis University and NORC at the University of Chicago, the study was based on surveys with 3,767 households between June and September 2021. Researchers contacted a random sample of households in the Los Angeles area via mail, email and telephone.