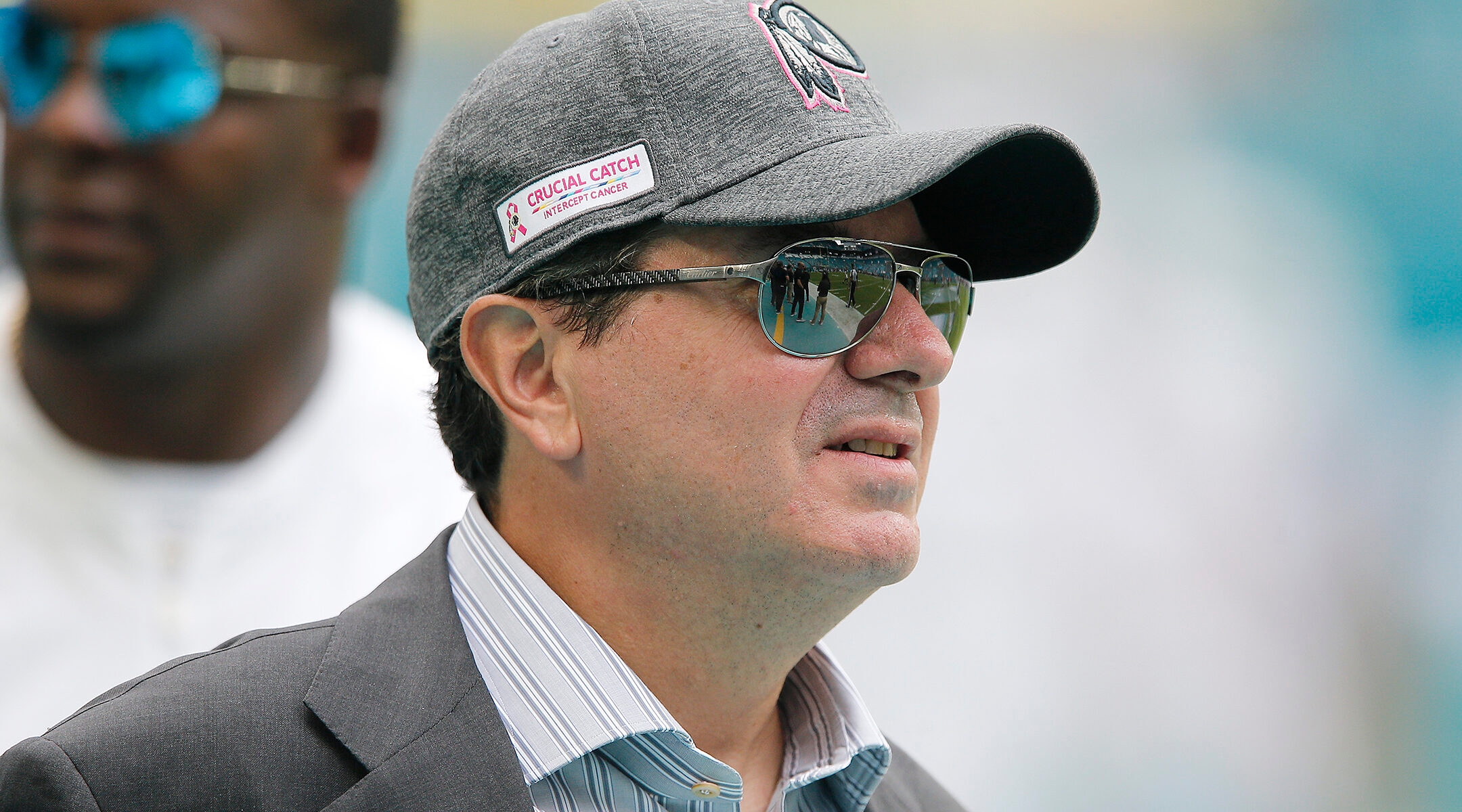 Washington Commanders owner Daniel Snyder looks on prior to a game against the Miami Dolphins at Hard Rock Stadium in Miami, Oct. 13, 2019. (Michael Reaves/Getty Images)
Advertisement

(JTA) — Washington Commanders owner Dan Snyder asked to postpone an appearance for a deposition on the sexual harassment scandal surrounding his team on July 6 or 8 because of a trip to Israel to observe his mother’s yahrzeit, or ceremony marking the anniversary of her death, his rabbi claims.

The House Committee on Oversight and Reform had summoned Snyder and NFL Commissioner Roger Goodell to appear as part of an investigation into the Commanders’ work culture and Snyder’s response to several complaints.

In a letter obtained by the Jewish Telegraphic Agency, Snyder’s attorney Karen Patton Seymour said that the owner is traveling to Israel, but would be available for video testimony on July 28 or 29. After Snyder missed the first hearing on June 22, claiming that he had asked for a delay, the committee had offered the dates of July 6 and 8.

“Given that these plans are part of religious observances honoring his mother’s memory on the one-year anniversary of her passing, Mr. Snyder’s trip to Israel cannot be rescheduled,” Seymour said in the letter.

Multiple women employees in executive positions with the team have accused their coworkers of sexual harassment. According to a document released in June by New York Democrat Carolyn Maloney, the House committee’s chair, Snyder conducted a “shadow investigation” to discredit their allegations, which involved hiring private investigators to intimidate witnesses and filing an overseas lawsuit to obtain phone records and emails.

The NFL fined the team $10 million and Snyder stepped down from day-to-day operations after the investigation was announced last July.

In another letter to Maloney, obtained by this reporter, Snyder’s rabbi, Sholom Raichik, wrote that the Snyder family had been planning a trip to Israel over the course of the past year. A yahrzeit is usually marked with a ceremony at home and occasionally the synagogue, but Raichik said this year’s anniversary coincides with the completion of a commissioned Torah scroll by a scribe in Israel to honor Snyder’s late mother, Arlene Snyder.

Republican Rep. James Comer of Kentucky, who is a ranking member on the Oversight Committee, was also cc’d on the letter from the rabbi.

Roger Goodell says Dan Snyder is still not involved in day to day operations with the Commanders and that will remain the case for the foreseeable future pic.twitter.com/BZZk5zdSmX

Raichik wrote that the services he and Dan Snyder planned for the Israel trip will “encompass most of July and into August.”

“Mrs. Snyder was a person who held the Torah laws and traditions dear to her heart,” Raichik said. “The ceremony in completion of the Holy Torah scroll in her merit and memory is a step in the process of the elevation of her soul and being drawn closer to G-d in heaven.”

Raichik also said that representatives from the Snyder family informed Maloney on multiple occasions about the yahrzeit observance and offered several alternative testimony dates, “including appearing remotely from Israel.”

“I understand that many of these Jewish traditions may be unfamiliar to you and your staff,” Raichik wrote to Maloney. “The staff’s insistence that Mr. Snyder disrupt his observances to participate in proceedings before your committee reflects an insensitivity to sacred Jewish traditions.”

Seymour said that Committee staff declined “even to acknowledge the proposed dates, stating only that the Committee would have to ‘determine how to proceed.’”

“I am concerned that the way the Committee staff has proceeded — including inaccurate public statements accusing Mr. Snyder of attempting to ‘evade’ an appearance and ‘seek[ing] special treatment’ — is not only unfair, but will detract from Mr. Snyder and his family’s ability to focus on the solemn rituals associated with the observance of his mother’s first yahrzeit.”

A committee spokesperson told JTA that Snyder failed to appear voluntarily at the Committee’s hearing in June and refused to allow his attorney to accept service of a subpoena.

“We remain committed to securing Mr. Snyder’s testimony on the toxic work environment at the Washington Commanders following his failure to appear voluntarily at the Committee’s hearing and his continued refusal to allow his attorney to accept service of a subpoena,”the spokesperson told JTA. “We are continuing to negotiate with his counsel to ensure the Committee can obtain the full and complete testimony we need, and we are reviewing her latest correspondence.”
Maloney, who is running for a congressional seat in New York’s newly drawn District 12 against her fellow longtime incumbent Jerrold Nadler — who is highlighting his Jewishness in his campaign — did not respond to a request for comment by publishing time.