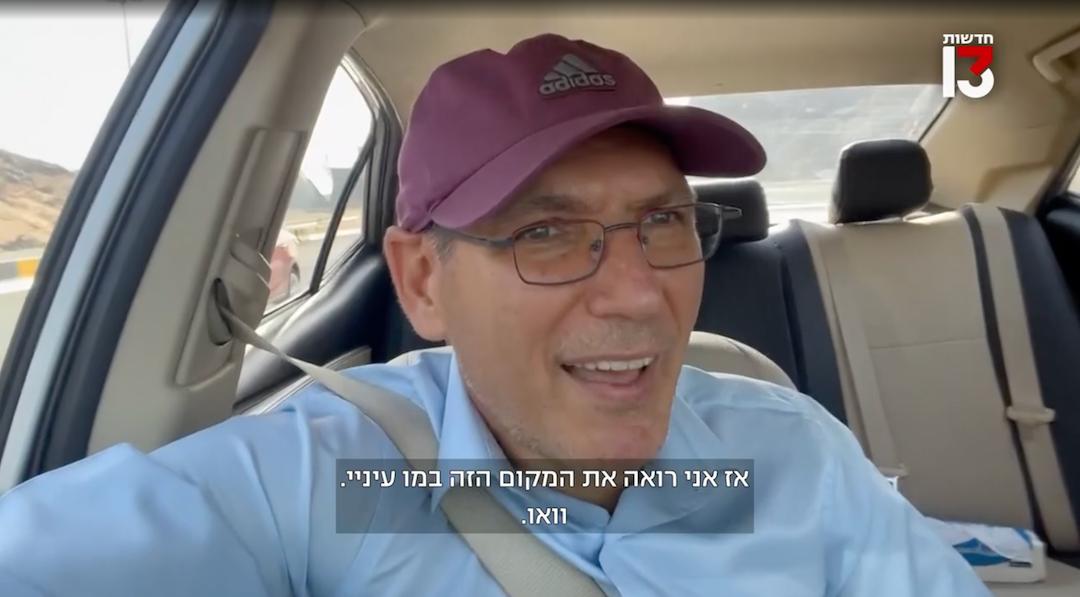 A screenshot from a segment on Israel's Channel 13 shows reporter Gil Tamary as he traveled to Mecca in Saudi Arabia. (Screenshot)
Advertisement

(JTA) – It was billed as a historic news scoop: the first Jewish Israeli reporter to document the annual Muslim pilgrimage of Hajj on an unprecedented visit to the holy city of Mecca in Saudi Arabia.

But when the footage of Channel 13 correspondent Gil Tamary in Mecca aired Monday evening, the public’s reception in Israel and in the Muslim world was sharply critical.

As Tamary states on air, entry to Islam’s holiest site is forbidden to members of other religions and illegal under Saudi law. Tamary, who was in the country on a special invitation by the Saudi government on the occasion of President Joe Biden’s diplomatic visit to the region, had decided to enter Mecca without permission in search of an exclusive story for his news outlet.

By Tuesday morning, social media was ablaze with outrage over Tamary’s act and the outlet’s decision to air the footage. Both the reporter and Channel 13 issued apologies, saying they didn’t mean to offend, but defending the segment as “an important journalistic accomplishment,” and “great journalism.”

In a region where visits to holy sites can instigate conflicts, the incursion could potentially have grave consequences. A visit by an Israeli prime minister to the Temple Mount in Jerusalem kicked off the Second Intifada.

In this case, Tamary’s foray comes as Israel and Saudi Arabia are engaged in a delicate effort to improve relations that is seen as crucial to managing the mutual threat of Iran. Some worry that Tamary’s trip could disrupt those ties.

The footage opens with Tamary announcing his intentions.

“The city is closed to anyone who isn’t Muslim, you can’t enter,” Tamary says in the broadcast. “It was clear that I had no chance of visiting Mecca but I was able to find the right person who agreed to risk himself and take me on a trip.”

To protect the safety of the guide he had recruited, the Israeli outlet blurred his face and distorted his voice.

They came up with a cover story in case they were stopped by authorities, involving a fake visit to see friends in Mecca. In the broadcast, they pass by road signs indicating non-Muslims aren’t allowed to proceed and lower the camera as they go through police checks on their way.

Upon reaching the holy Mount Arafat they exit the car and Tamary’s guide can be heard saying, “This whole thing is illegal.”

Tamary begins speaking to the camera in Hebrew, whispering to avoid detection.

“Only Muslims are allowed here. No Israeli journalist has ever broadcast from here,” Tamary says.

Tamary says the guide begins feeling uneasy but Tamary insists they climb to the top of the mountain for a better vantage point. That’s where they meet trouble.

“I was confident no one is noticing me but apparently I was attracting too much attention,” Tamary says. “My guide suddenly touches my shoulder using our agreed sign [that] it’s time to get away. He had heard one of the religious people say that I need to be approached to see if I am a Muslim. We have raised suspicions here and we are escaping.”

The feeling that the broadcast was disrespectful to Muslims was widespread enough to generate a viral hashtag in Arabic that translates as “Jew in the Haram,” referring to Mecca’s Grand Mosque that houses the cube-shaped Kaaba.

“My dear friends in Israel, one of your reporters entered the holy Muslim city of Mecca and filmed without any shame. That’s like me entering a synagogue and reading the Torah. Shame on you Channel 13, you should be ashamed of disrespecting Islam like that,” Saud says in the video.

Saud’s example is not strictly equal because it is not illegal for a Muslim to enter a synagogue and while it could violate certain Jewish religious rules and cause discomfort, it would not create an international incident with possible diplomatic repercussions.

Many Israelis took to Twitter to criticize Tamary’s visit.

A user calling herself Safta Miriam, for example, wrote, “Gil Tamary should be fired. So disrespectful! Channel 13 should be fined.”

“With great shame I express my personal apology for the sacrilegious & irresponsible entry of a Jewish Israeli reporter to the holy Islamic city of Mecca,” he wrote on Twitter. “Condemnation of his action & video have been heard across Israel. The act of a fool.”

Following the outcry, Tamary tweeted that he had “not intended to offend Muslims, or any other person. … The purpose of this entire endeavor was to showcase the importance of Mecca and the beauty of the religion.”

Professional ethics for journalists generally prohibit lying about one’s identity or breaking the law to secure a story. But Tamary concluded his apology with a defense of the segment on journalistic grounds. “Inquisitiveness is at the heart and center of journalism, and this type of first-hand journalistic encounter is what separates good journalism from great journalism,” he wrote.