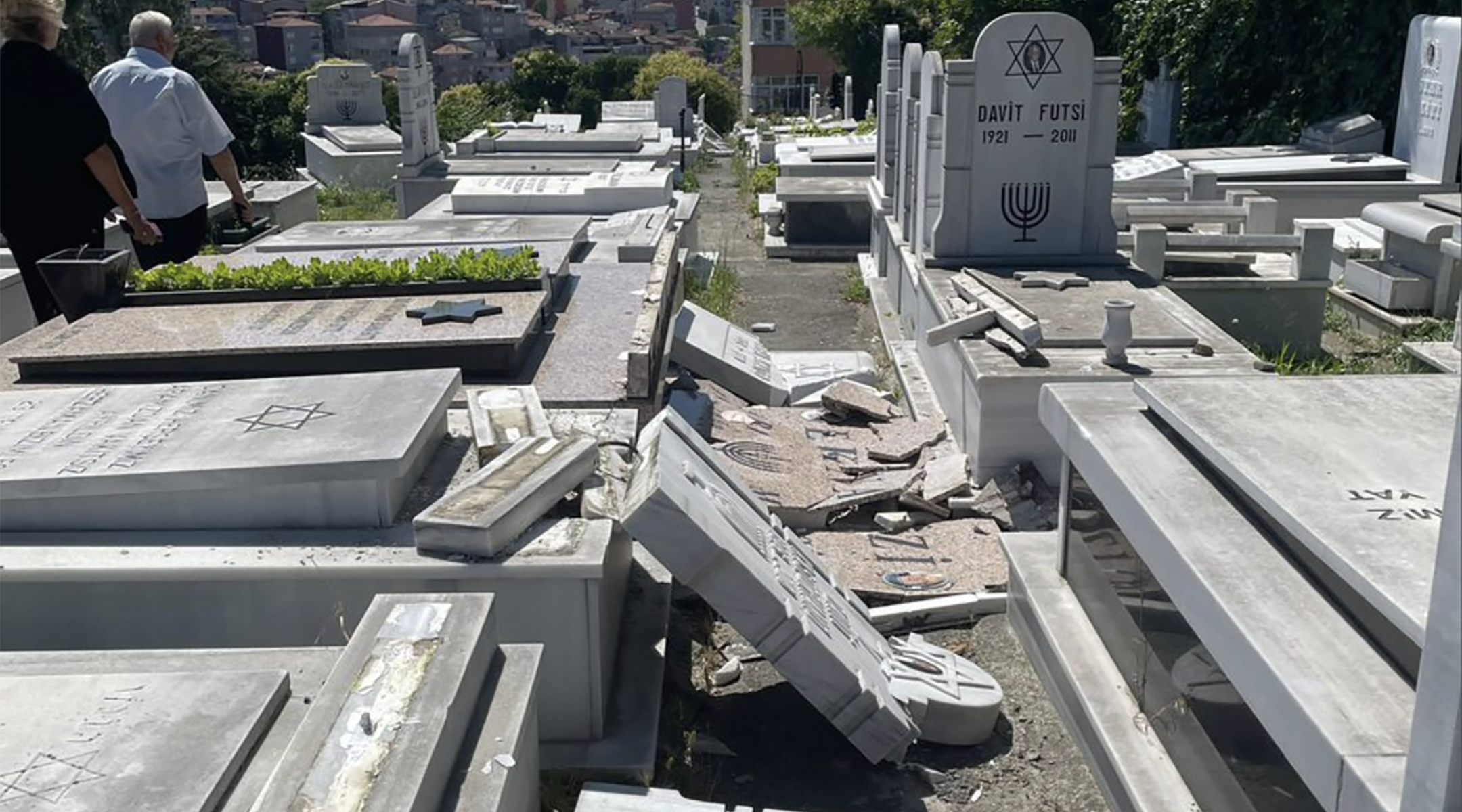 “Our Hasköy Cemetery was entered at midnight, and 36 of our tombstones were destroyed,” the community’s official Twitter account said last Thursday. The Turkish Jewish weekly Şalom Gazetesi later put the number at 81. “The matter has been conveyed to the relevant authorities with all the pictures and night recordings, and we expect the perpetrators of this vandalism to be caught as soon as possible.”

The incident garnered a quick response at the highest level. Ibraham Kalin, the spokesman for Turkish President Recep Tayyip Erdogan, strongly condemned the vandalism in a tweet, calling it a “heinous attack.”

“We will never allow those who attack sacred values and try to sow seeds of strife and enmity in our society,” he added.

Shortly after, Turkey’s interior minister, Suleyman Soylu, tweeted that two suspects had been caught and detained by Istanbul’s police department. Turkish media reported that they were children.

Several other leading members of Erdogan’s Justice and Development Party (AKP) chimed in to condemn the vandalism, as did the head of the opposition Republican People’s Party.

As Turkish-Israeli ties reach the most optimistic point they have been in the last decade, Erdogan has engaged in what many have viewed as a charm offensive, supporting the renovation of synagogues and sites of Jewish heritage around Turkey.

However, members of the left-wing, largely Kurdish, People’s Democratic Party (HDP) raised the topic in Turkey’s parliament, asking AKP leadership whether the vandalism was the result of intolerance by Erdogan’s government.

“Isn’t the hate attack on the Hasköy Jewish Cemetery a result of a culture of hatred?” Garo Paylan, a HDP MP from Diyarbakir — Turkey’s most populous Kurdish city — asked, directing his questions to Vice President Fuat Oktay.  “What will you do to stop hate speech that causes hate crimes against minorities [including Jews and Christians]?”

Paylan, who is of Armenian descent, has also been outspoken in support of Turkey’s Armenian minority and against the denial of the Armenian genocide in Turkey.

Oktay has not publicly responded.

The vandalism comes little over a month after the Israeli government warned its citizens to avoid Istanbul over a threat of violence from Iranian terror cells in retaliation for the killing of a Revolutionary Guard colonel. Israel has since downgraded the warning after Mossad and Turkish intelligence authorities collaborated to neutralize the threat.

Though public antisemitism — from politicians, religious leaders and in national media — is not unheard of in Turkey, attacks against local Jewish community sites are rare. The community experienced synagogue bombings in 2003 and 1986.

Sitting along banks of Istanbul’s famous Golden Horn — the inlet of the Bosphorus through which all the wealth of the Ottoman empire flowed — Hasköy boasted 25,000 Jews until the 1950s, when the Jewish exodus from Istanbul began in earnest. No Jews still live in the neighborhood today.

According to Şalom, Istanbul’s Municipality, has pledged to restore all of the damaged graves.

“We condemn it, we are sorry. We hope such situations do not happen,” Turkish Chief Rabbi Isak Haleva said in a statement. “Our government will do what is necessary. Do not disrespect the dead. We believe that the state will resolve this issue.”