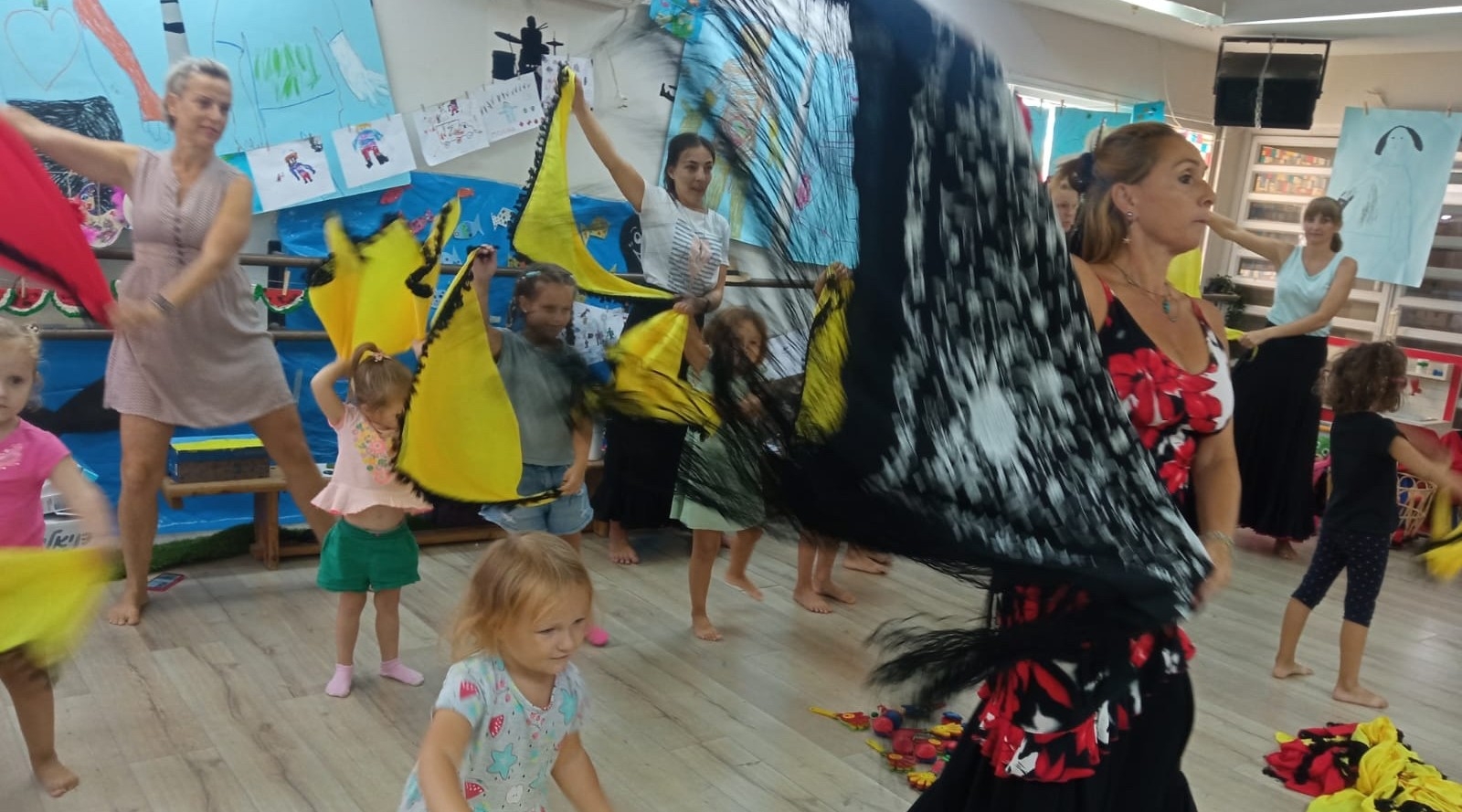 Flamenco dancers visit a center in Netanya, Israel, for evacuees from Ukraine as part of an educational activity for children. (UJA-Federation)
Advertisement

Before Olga decided to flee Ukraine, she and her 16-year-old daughter sat in the basement of their home while Russian rockets fell around them.

“There was no water, no light,” she recalled, crying. “We needed help in order to leave.”

Olga — whose last name and city of origin are being withheld out of concern for the safety of relatives still in Ukraine — eventually found a way out amid Russian bombardment, first escaping to Moldova and then flying to Israel. While she and he daughter were in transit, she learned that her father’s body had been discovered in his apartment; it was unclear how long he had been dead.

Meanwhile, Olga’s husband and adult son had to remain behind due to Ukraine’s wartime rule barring males age 18-60 from leaving the country in the event they’re needed to defend the home front.

Four months on, Olga is living in Israel with her in-laws, who also escaped the war, and reports that her daughter is in high spirits and has fallen in love with the country.

“She’s in touch with lots of other teens online — girls and boys,” she said. “Her life is falling into place.”

Olga and her family are among tens of thousands of Ukrainians who have found safe haven in Israel during the war, and are among the countless Ukrainian evacuees in the country who are on the receiving end of some $2.5 million in support from the UJA-Federation of New York.

“Your organization is helping us a lot — thank you,” Olga told a UJA-Federation representative during a recent visit to Beersheva, where Olga is staying, to better assess aid recipients’ needs. “We were just lucky.”

The funding that UJA-Federation allocated for Ukraine relief in Israel is part of $16 million the charity has earmarked to date to provide support for Ukrainians worldwide.

The rest of the money is going toward humanitarian aid and critical services in Ukraine; support for Ukrainian refugees in neighboring countries including Poland, Moldova, Romania and Hungary; aid to Ukrainian refugees who have made their way to New York; and, earlier in the war, a large Passover-related aid effort. In addition, money is going to the Jewish Agency for Israel to help facilitate those wishing to immigrate to the country.

Since Russia attacked Ukraine on Feb. 24, tens of thousands of people have fled to Israel from both Ukraine and Russia.

Although many are in the process of obtaining citizenship under Israel’s Law of Return, which grants individuals with one or more Jewish grandparent access to Israeli citizenship, many others arrived from Ukraine who are not eligible for the Law of Return. They are permitted as evacuees of war to stay in Israel temporarily as long as they have family in Israel, according to Itzik Shmuli, director-general of UJA-Federation’s Israel office.

Olga, who is not Jewish but whose husband is, is classified as a war evacuee because her husband is unable to leave Ukraine and therefore cannot apply for Israeli citizenship.

“Those who have arrived from Ukraine are mostly women, children and the elderly,” Shmuli said. “The men are not allowed to leave and those who have arrived suffer from a lot of trauma and financial strain. They lack basic needs and don’t know the language and culture. Their personal situation due to these circumstances is complicated.”

As a result of having to move into the homes of families in Israel, Shmuli said, there often are seven, eight or even nine people cramped together in small apartments. 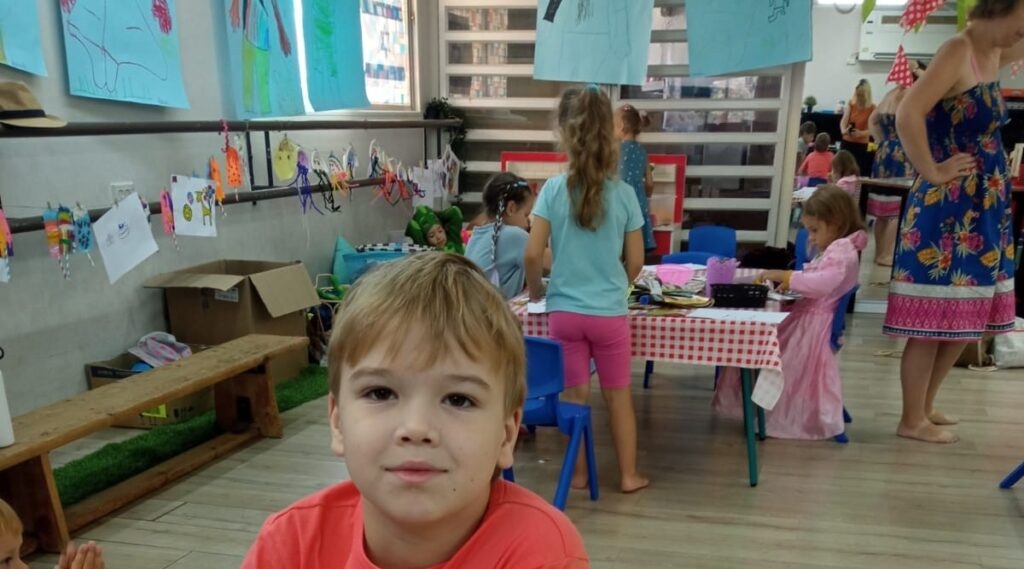 An education and care center in Netanya is one of six educational support centers in Israel for Ukrainian evacuees that UJA-Federation of New York is supporting. (UJA-Federation)

Such is the case for a woman named Yulia, her husband and three young sons in Netanya, who are hosting Yulia’s grandmother, sister and two young nieces from Ukraine in their crowded apartment. The guests sleep on mattresses that are unrolled each evening on the living room floor. When Yulia’s 4-year-old niece heard planes flying overhead in celebration of Israel’s Independence Day in May, she became terrified, thinking the planes were about to drop bombs.

To help these families, UJA-Federation assembled a team of psychologists, trauma experts and educators trained in psychotherapy and trauma support. Federation funding also has gone toward summer programs for children, including at a newly created temporary educational support center near Yulia’s home where she was invited to send her two young nieces. Yulia’s 9-year-old son, Leon, who speaks both Russian and Hebrew, volunteers at the center.

Yulia’s nieces were able to obtain medical insurance through UJA-Federation’s Immediate Needs Fund in Netanya after one of them fell, requiring urgent medical care. The fund, which provides cash assistance in addition to medical and dental care, also recently helped a 103-year-old woman with refugee status obtain urgent dental care.

UJA-Federation is also providing the funding for educational support centers for Ukrainian evacuees in six Israeli cities with large Russian-speaking populations: Haifa, Netanya, Ashdod, Rishon LeZion, Beersheva and Bat Yam. Housed in community centers and kindergartens that are empty in the summer, the centers are staffed with therapists and educators and run by three nonprofits: Yalduta, Early Starters International and Variety Jerusalem.

“Every child has the right to quality early childhood education, especially in times of war and after experiencing trauma,” said Ran Cohen Harounoff, cofounder of both Yalduta and Early Starters. “It’s our responsibility to provide a response that is professional and treats the children with dignity.”

For older refugee children, UJA-Federation is supporting summer camps so they can have a semblance of return to normalcy. In all, some 4,500 refugee children are enrolled in the camps, according to Shmuli.

In New York, about 150 Ukrainian refugee children ages 8-16 are being supported by UJA-Federation and the J.E. and Z.B. Butler Foundation, with about $250,000 in funding for camp scholarships. They’re going to such places as Camp Zeke, Usdan Summer Camp for the Arts, Jewish Community House of Bensonhurst, Kings Bay Y, Shorefront Y and Island Quest, according to Josh Satok, a senior planning executive at the federation. Those camps are all run by UJA grantees but do not exclusively serve Jewish children (not all of the Ukrainian children are Jewish, either).

“I like the lake, circus and gymnastics,” Olha, who is attending Camp Zeke in Lake Como, Pennsylvania, told one of the camp’s staff members. “And there’s always fun music playing in the dining hall. My favorite food is what we had this morning — the breakfast pizza. My other favorite meal at camp is Shabbat dinner. All the counselors are always playing and hanging out with us. I like everything!”

The bulk of the Ukrainian children are in Bensonhurst, where there is a big Russian-speaking community.

Sixteen refugee children are attending the Usdan camp in Wheatley Heights, Long Island. Because Usdan does not have Russian speakers, UJA connected its staff with the JCH of Bensonhurst, Kings Bay Y and Shorefront Y, and a staffer who speaks both Russian and Ukrainian was hired by Usdan for the summer.

It’s all part of the global response of UJA to the crisis in Ukraine, Shmuli said.

“While the current allocations are targeted for summer activities,” he said, “UJA’s Israel office continues to be in close contact with the government, local authorities and NGOs, contributing to the planning of longer-term solutions to a situation that will likely not subside anytime soon.”