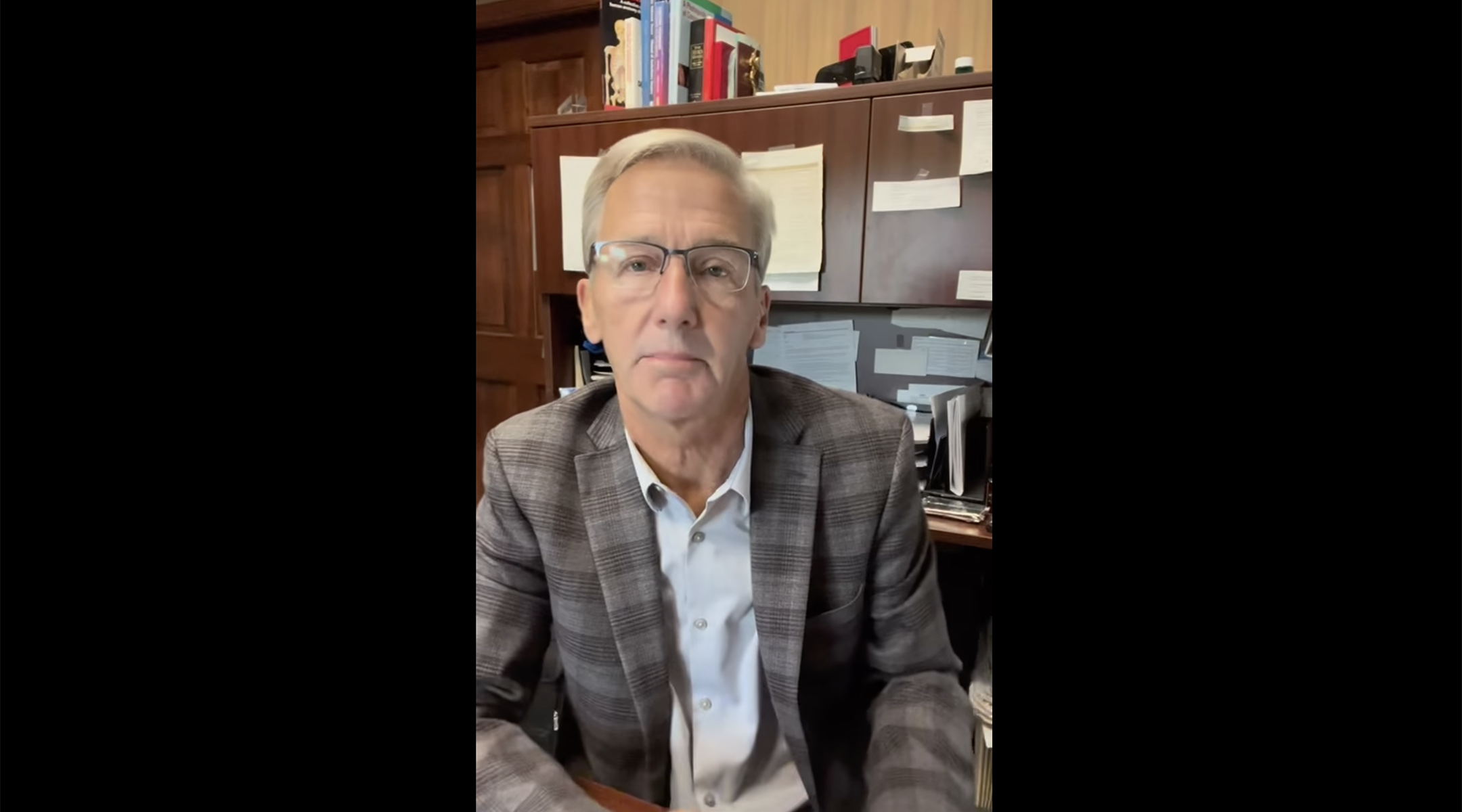 (JTA) — When the Minnesota GOP’s nominee for governor invoked Kristallnacht and Hitler at a recent anti-mask mandate rally, it was a by-now familiar scene: a public figure comparing life under COVID-19 restrictions to the days of Nazi rule.

But on Tuesday, former State Sen. Scott Jensen did something unusual: he doubled down.

“I want to speak to a little bit of a hubbub that’s been in the media lately about whether or not I was insensitive in regards to the Holocaust. I don’t believe I was,” Jensen said in a Facebook video. “When I make a comparison that says that I saw government policies intruding on American freedoms incrementally, one piece at a time, and compare that to what happened in the 1930s, I think it’s a legitimate comparison.”

It was a markedly different approach to a cycle that has continued on repeat since the initial COVID outbreak in 2020: A public figure declaring that mask mandates and lockdown measures, usually instituted by Democrats, have something in common with Nazi policies, before reversing course following pressure from Jewish groups and Holocaust memorial organizations. That was the case with Ohio Rep. Warren Davidson; New York City Councilwoman Vickie Paladino; antivax activist Robert Kennedy Jr.; and others.

But unlike those other figures, Jensen stood by his words, saying, “It may not strike your fancy — that’s fine. But this is how I think, and you don’t get to be my thought police person.”

Jensen, who received more than 90% of the Republican vote in Minnesota’s Aug. 9 primary, was responding to a recording of him at an anti-mask rally in the state in April, where he said that Democratic Gov. Tim Walz’s COVID policies were comparable to Kristallnacht, the “night of broken glass” that heralded the beginning of the Nazis’ antisemitic mass violence.

“If you look at the 1930s and you look at it carefully, we could see some things happening, little things, that people chose to push aside — ‘It’s going to be okay. And then the little things grew into something bigger,’” Jensen said at the rally, in a speech captured on video. “Then there was a night called Kristallnacht — the night of the breaking glass.

“Then there was the book burning, and it kept growing and growing, and a guy named Hitler kept growing in power, and World War II came about. Well, in a way, I think that’s why you’re here today. You sense that something’s happening, and it’s growing little by little.”

The rally was sponsored by Mask Off Minnesota, a group that spreads COVID-19 misinformation. Jensen, a licensed physician, is himself unvaccinated and has made public comments in which he has questioned the efficacy of COVID vaccines and other pandemic policies.

After Jensen’s initial comments were reported by TC Jewfolk, condemnations came from the regional American Jewish Committee, the Jewish Community Relations Council of Minnesota and the Dakotas and the head of local progressive Jewish group Jewish Community Action.

The AJC further criticized Jensen on Tuesday for doubling down on his comments. ”It was extremely disappointing that Scott Jensen had compared Covid restrictions to Nazism earlier this year,” regional director Jacob Millner said in a statement. “It is just as disappointing that Tuesday he said it was a legitimate comparison. It is not. To equate a public health emergency with Kristallnacht, a terror spree in Germany that destroyed Jewish homes, businesses and synagogues, is not a legitimate comparison.”

Millner called on Jensen to “seek to better understand the severity of the Holocaust.”

In Jensen’s video, he further explained his comments by referencing the famous “First they came for…” poem by the German philosopher Martin Niemöller. “He’s speaking about incrementalism,” Jensen said. “I think in order for us to glean the big lessons from horrific catastrophes in the history of mankind, we frequently have to go deeper and ask ourselves, what were the incremental changes beforehand that might have tipped us off?”

Jensen put out his Tuesday video hours before he was scheduled to speak at a candidate forum for the Republican Jewish Committee. Requests for comment to RJC were not returned. RJC has not made any public responses to Jensen’s comments to date, but the group has criticized Republicans who have made comparisons between COVID policies and the Holocaust in the past.

Jensen is not the only politician to have doubled down on COVID-Nazi comparisons. Last year, Rep. Marjorie Taylor Greene also stood by comments she made blaming “vaccine Nazis” for “ruining our country,” after previously touring the U.S. Holocaust Memorial Museum in the process of apologizing for making a similar comparison.