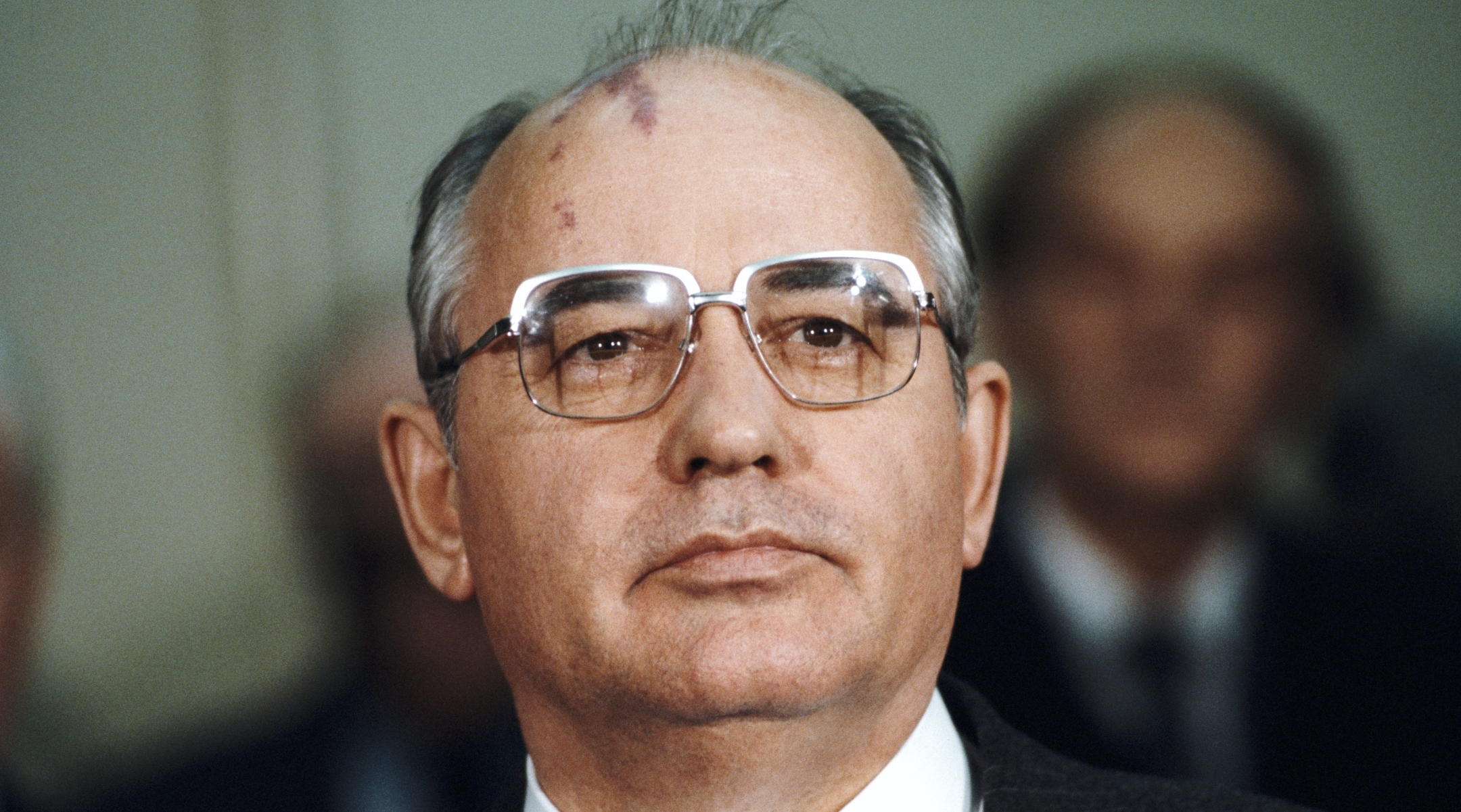 Mikhail Gorbachev, Russian Politburo member and second in line at the Kremlin, announces the death of Soviet Defence Minister Marshal Dmitri Ustinov, before departing from Edinburgh Airport for Russia, in Edinburgh, Dec. 21 1984. Gorbachev was on a week-long trip to Britain. (Bryn Colton/Getty Images)
Advertisement

(JTA) — Mikhail Gorbachev, the Soviet leader whose reforms, including allowing massive numbers of Jews to emigrate to Israel, changed his country and the world, died at 91.

It was clear when Gorbachev rose to power in 1985 that he would be different from his predecessors as secretary general of the Communist Party. He was younger, more vibrant, more open to acknowledging where communism had fallen short in the Soviet Union.

But his rise was at first inauspicious for the movement that had sought for decades to allow Jews to freely emigrate.  The Soviet regime prevented them from leaving and often punished them for seeking exit at all.

The number of Jews allowed to emigrate in 1985 was already low, 1,140, and slipped further to 914 in 1986. The sense among Soviet Jewry activists was that the new and relatively young leader was even more regressive than his predecessors.

His Western outlook seemed cosmetic. Visiting Britain in 1984 as a senior member of the Politburo, a year before his rise to leader, he shopped and joked — and snapped at a lawmaker who asked him about religious restrictions, “You govern your society, you leave us to govern ours.”

But then in 1987, the numbers of Jews emigrating began rising precipitously, reaching 185,000 in 1990, spurred in part by bold advocacy by American Jews that made releasing their Soviet brethren a politically wise maneuver for Gorbachev. At the same time, Gorbachev oversaw an end to restrictions on religious worship and most dramatically, opened the gates for the most famous of refuseniks and so-called “prisoners of Zion,” or those who had been imprisoned for their Zionist activity, including Natan Sharansky, Ida Nudel and Yosef Begun.

In a statement an aide delivered in 1991 at Babyn Yar, the killing field in Ukraine where Nazis launched the final solution seeking the annihilation of Jews, Gorbachev condemned all forms of antisemitism.

Gorbachev’s reforms affecting Jews were part of a much broader revolution he led to end the Cold War, the decades-long Soviet-U.S. standoff that many in the west feared would heat up into a nuclear conflict.

He and U.S. President Ronald Reagan joined in successful disarmament talks, and Gorbachev’s policies of perestroika (reconstruction) and glasnost (openness) introduced unprecedented freedoms of expression and organization to the Soviet Union. He decentralized the confederation, handing more power to the republics in a move that would eventually lead to their independence.

Gorbachev resigned after a failed coup in December 1991 that sought his ouster. He had bested the plotters but the economic uncertainty and the devolution of power created a sense of chaos and left him open to criticism that he was no longer the right man to lead Russia in an age of monumental transformation. He slipped into the obscurity of private life, much of which he spent with his beloved wife Raisa until her death in 1999.

Leaders of American and western Jewish organizations surprised themselves after his ouster by praising the leader of a nation they had once joined Reagan in reviling as an evil empire.

“Though Gorbachev was late in breaking out of the human rights gate, the positive changes he ultimately initiated would have been unthinkable to us in the Soviet human rights advocacy movement a decade ago,” the Student Struggle for Soviet Jewry, among the most strident of advocacy groups, said at the time.

In a statement Wednesday, Rabbi Arthur Schneier, the senior rabbi at Park East Synagogue in New York, recalled his multiple meetings with Gorbachev in the 1980s.

“Gorbachev recognized that the issue of human rights was an integral component of international relations, he introduced numerous changes affecting those rights and eventually opened the doors and allowed thousands of Jews to leave the Soviet Union for a life of religious freedom in the United States and Israel,” Schneier said.

A pocket of admiration endured in Israel, where Gorbachev got a hero’s welcome in 1992. He got awards, honorary degrees and, much to his bemusement, a new breed of potato named for him.

Gorbachev delivered during that visit a nuanced assessment of the antisemitism that had plagued his country. Antisemitism, he said, was “officially denied in policy but encouraged in practice.”

“In the days of Stalin, especially after World War II, antisemitism was introduced into domestic and foreign policy,” Gorbachev said. “Even after the death of Stalin, this state of affairs continued, but not in openly repressive forms.”

Speaking to a reporter after that speech, he said he also regretted the results. The exodus of what by then was at least 350,000 Jews, was, he said, a “loss for our land and society.”

Gorbachev had not publicly commented on Russia’s invasion this year of Ukraine, formerly part of the country he governed, although his foundation urged its speedy end. The invasion has cooled relations with the west that Gorbachev had warmed — and has spurred yet another wave of Russian Jewish emigration, to Israel and elsewhere.