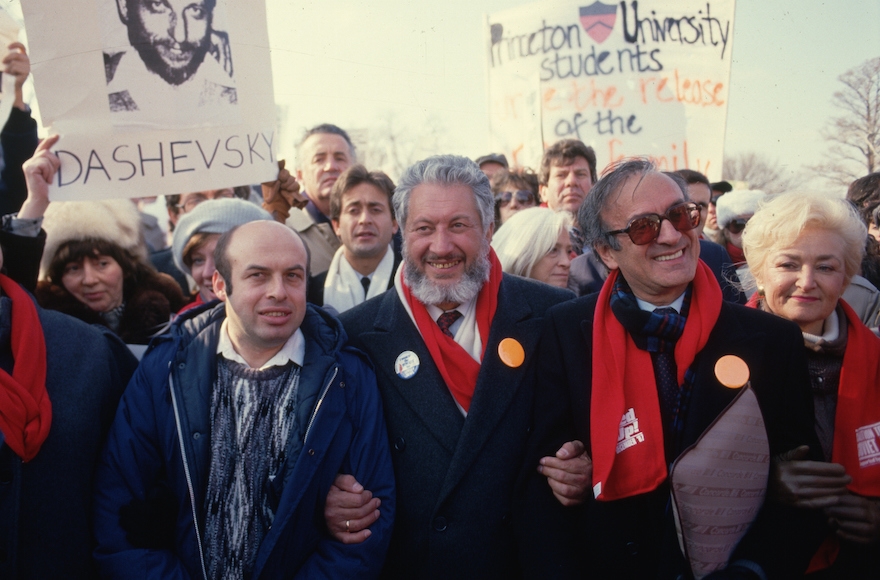 (JTA) — Thirty years ago, Jews in the Soviet Union were not allowed to study Hebrew, eat kosher food, talk about Zionism, go to a synagogue or, most important, leave the country. If they tried to emigrate, they would almost certainly be refused, lose their jobs and be blackballed in their professions. They would then be put on trial and imprisoned for being unemployed.

On Dec. 6, 1987, some 250,000 American Jews got very loud. They gathered on the National Mall in Washington, D.C., to protest the plight of their Soviet brethren on the eve of a U.S.-Soviet summit. Organizers weren’t sure the demonstrations would work – and there was real worry that a small
demonstration would do more damage than no demonstration at all. But after 25 years of tireless activism, American Jews gathered in huge numbers and used their voices to change history.

I came of age under a regime that barely tolerated and actively persecuted me, my family and my friends because of our heritage. The pre-summit protests showed the world that my community was not alone. The power of unified action won for us our fundamental freedoms.

Speaking at the event, then-Vice President George H.W. Bush called on Soviet Premier Mikhail Gorbachev to “let these people go.” The next day, President Ronald Reagan confronted Gorbachev with news of the protest, and the U.S. government began to focus on the plight of Soviet Jews in its exchanges with Soviet authorities. Reagan regularly carried lists of refuseniks into meetings, insisting that their circumstances be addressed. Slowly but surely the gates of Soviet Russia began to open, all the result of resolute advocacy by the American Jewish community. It is not exaggeration to say that the American Jewish community set my people free.

Many Jewish families can trace their presence in the U.S. directly to that day on the National Mall: PayPal co-founder Max Levchin, actress Mila Kunis, singer-songwriter Regina Spektor and Olympic gold medalist Lenny Krayzelburg, among others. The scale of the eventual exodus from the Soviet Union to the U.S. was vast. Today, former Soviet Jews and their offspring account for 10 to 15 percent of the Jewish population in North America.

As a Jew brought up in Lvov in Ukraine, my gratitude toward the American Jews and the pride I feel in their accomplishment is immense. In 1987, Soviet Jews were only 40 years away from one of the worst genocides in world history – the Holocaust, whose scale and unfathomable cruelty in the
countries of the former USSR are not yet properly documented to this day. Many of us still carry the scars of that horror, as well as from Stalin’s purges and other violent anti-Semitism in many corners of the world.

Were it not for the 1987 march in Washington, whole families would have been lost, American society would have not been as enriched, and the world would have lost untold technological and cultural advances. None of this would have been possible had Jewish people and their leaders in America
decided instead to play it safe.

The struggle to achieve religious and cultural freedom has defined and shaped all of human history. Every generation, whether Jewish or not, must confront humanity’s bloody history and fight to achieve and maintain the freedoms that are rightfully ours. The world learned 30 years ago that it is
those choices that make the difference.

The lesson I carry with me on this anniversary is a powerfully uplifting one: When we unite behind the common good, when we stand up to danger, and when we join hands to take action, great things can happen. The Jewish community across the world, no matter where they or their grandparents
call home, should look back to the 1987 march on Washington with pride and a renewed sense of purpose. Together we called on the world to let our people go – and our people were freed.

(Mikhail Fridman is an international businessman, investor and philanthropist who is a co-founder of Genesis Philanthropy Group and a supporter of Holocaust remembrance and education initiatives in the USA and around the world.)

Soviet Jewry: The struggle to lift the Iron Curtain