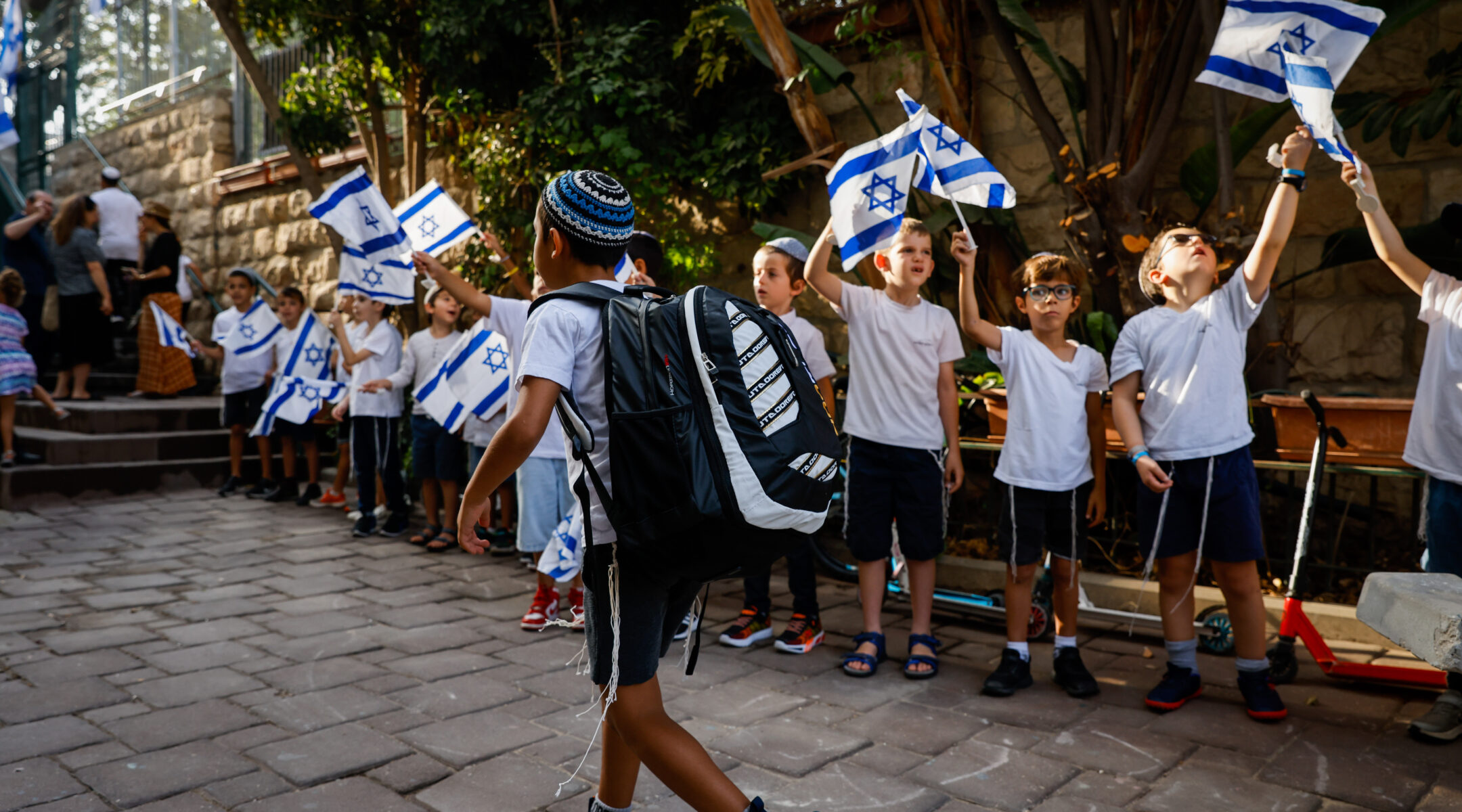 Israeli students seen on the first day of school at a school in Jerusalem, Sept. 1, 2022. (Olivier Fitoussi/Flash90)
Advertisement

JERUSALEM (JTA) — Israel’s school year ended in June with a strike by teachers. It very nearly began with one, too.

Instead, children headed back to school Thursday amid a new deal between teachers and the Ministry of Education that raises starting salaries, scales back vacation days and introduces changes meant to reward good teachers and prevent low-performing ones from remaining in the classroom.

The agreement puts in place some recommendations made decades ago amid concerns about students’ lagging performance on international exams, a worrying sign for a country that prides itself on being a home to the People of the Book and a Start-Up Nation capable of leading the way in innovation.

But for families, the deal’s most crucial consequence is staving off uncertainty about whether there would be school at all.

“Every year it’s the same story,” said Hai Cohen, a 44-year-old father of four in Jerusalem. “The teachers make a lot of noise about money, money, money. They want a raise. That’s fine, but they should just decide once and not threaten to strike every year.”

Israel’s longest teachers strike was in 2007: It continued for 64 days. Two years ago, Israel’s teachers unions threatened a strike that was averted the day before the start of the school year after a deal centered on sick days, a concern as schools resumed during the pandemic. 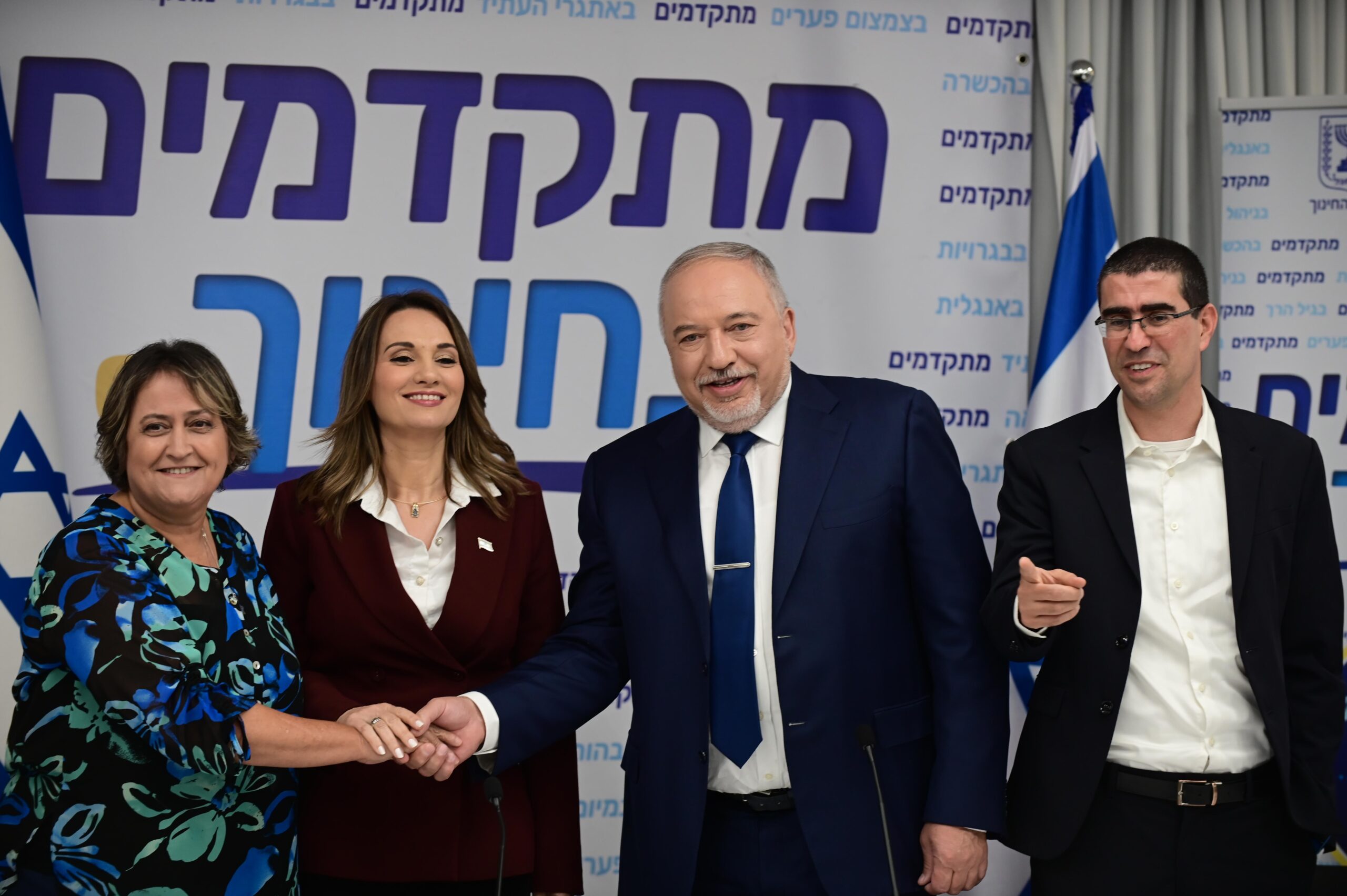 Yaffa Ben David, secretary general of the Israel Teachers Union, shakes hands with Minister of Finance Avigdor Lieberman and Minister of Education Yifat Shasha Biton during a press conference following the new deal with teachers at the Ministry of Education in Tel Aviv, Aug. 31, 2022. (Tomer Neuberg/Flash90)

This time, again, millions of parents and children learned just a day before school was set to begin on the traditional Sept. 1 date that classes would be in session. Cohen, at least, said the deal meant little to him.

“I wasn’t worried about it, I knew it would be resolved before the school year starts,” said the barber, whose children are entering first through eighth grade. “And if it wasn’t resolved, I would drop them off at school anyway. I don’t give a damn. I need to work.”

Cohen’s attitude represents a core issue at the heart of Israel’s ongoing teacher labor disputes. While most Israelis believe educators are underpaid, they also fume at the fact that many schools end their day at 1 p.m. and teachers have vacation days that other workers do not, making it difficult for families to manage their lives.

“I definitely think teachers should have fewer vacation days,” said Yochi Hadad, 48, the finance director of a private company in Jerusalem and the mother of three boys. “It’s very hard on parents. The Israeli economy works as usual, so there is no reason for teachers to take off Isru Chag (three one-day holidays), one and a half weeks holiday before Passover, eight days for Hanukkah instead of two and three days for Purim, which is a one-day holiday.”

Others put it more harshly. “I’m not angry, I’m furious,” said Ina Keynan, a 46-year-old architect and mother of three in Jerusalem who started a new job Thursday and did not know until the day before whether she would make it or need to stay home with her children instead. “Let them have a [monthly] salary of 20,000 shekels [about $5,800], they deserve it. But they should stop holding on to vacation days as if they were a man’s balls.”

The teachers unions have argued that the vacation days are needed to compensate for challenging working conditions and low pay.

Israeli schools are short on equipment and funds and students are often rowdy and disrespectful. Classes are often very large, with 30 to 40 children per teacher. New teachers, even those working 10 years, have been sorely underpaid, earning as little as 5,400 shekels (roughly $1,600) a month. Pay for veterans is better, but many teachers don’t last that long: According to a recent Finance Ministry report, 21% of teachers who had worked for two to five years left the profession over the past year, an increase of 60% over the previous year. The conditions mean that the school system chronically lacks teachers — this year nearly 6,000. The shortage has led school principals to fill vacancies with teachers who lack specific expertise such as math or science.

For Americans moving to Israel, the state of schools can come as an unpleasant surprise.

Rachel Gutman, who worked as a teacher in the United States, exited the profession after one semester working in an Israeli school a decade ago.

“I tried to teach here but found the system so horribly disrespectful,” said Gutman, who is now the development director of ANU, The Museum of the Jewish People in Tel Aviv. “In California, I taught inner-city Latino kids. My kids were in gangs, and I never encountered the kind of disrespect I did here. … Teaching was my passion. But I couldn’t do it. To be paid so little and treated so poorly. It’s shameful how teachers are treated in this country — which is supposed to be ‘Am Hasefer,’ the people of the book.”

More recently, Uriel Heilman, who moved to Israel from suburban New York City in 2019 outlined his concerns about his four children’s schools in an essay on Kveller. (Heilman is director of business development at 70 Faces Media, the Jewish Telegraphic Agency and Kveller’s parent company.) He described large classes, rote work, little support for children who struggled and little time devoted to core subjects.

“I have a close friend in Jerusalem who homeschooled his children for many years. I used to laugh at him, pointing out that while I paid hefty Jewish day school tuition fees so my kids could go to Jewish schools, he had them available to him for free. I couldn’t understand why he kept his kids at home,” Heilman wrote. “Now I’m not laughing anymore.”

Given the many pressing issues facing the country’s schools, many Israeli educators argue that a focus on vacation days is misplaced.

“There is no connection between parents’ need for childcare and teachers’ vacation days,” said Elinor Levy, 57, a beloved fifth- and sixth-grade teacher at Szold Elementary School in Jerusalem. “The school is not a babysitter for the parents until they make a career.” Arab students seen on the first day of school at the Noreen school in the Jerusalem Arab neighborhood of Beit Hanina, Sept. 1, 2022. (Jamal Awad/Flash90)

Levy said she was frustrated with how the potential of a teachers strike had affected people’s attitudes towards teachers.

“I am happy to be a teacher. And it is important to me that excellent teachers come to the profession and that they finally make a serious revolution in education. There is nothing more important than that. This is the future of Israel!” she said. “But I only hear talk about salary and a lot of disrespect for teachers.”

Levy, who has been teaching for 30 years, recognizes what international test scores show: that Israeli schools could be doing a lot better. Israel’s pupils fall well below average in reading, math and science on the PISA exam, given regularly by the Organization for the Economic Cooperation and Development, or OECD, to students from 38 of the world’s developed countries. But she said more money for individual teachers isn’t all that’s needed.

“In my opinion the most significant steps for change are small classes and exploratory learning,” Levy said. “A small class makes it possible to give a real and personal, educational and emotional response all the time to all the children. But that costs money. For children to do real research you need a lot more computers. That costs money. To really explore, you have to go on trips and do experiments. That’s money. These are the most important things.”

Research conducted in American schools has shown that increasing the time children spend in school and increasing spending on schools both yield benefits to student achievement. (Although educators almost universally say their students would benefit from smaller classes, research on reducing class size is more mixed.) Those policies have shown more durable results than others that have waxed and waned in popularity in the United States, including paying teachers more based on their students’ performance and firing more teachers who are deemed to be underperforming.

A 2003 task force set up by the Israeli government recommended a slew of changes from both buckets: an increase in teacher pay, the introduction of merit bonuses, and extending school days to 4 p.m., while shortening the school week to five days, Sunday through Thursday. (Israeli schools are open for a half day on Fridays as well.) These recommendations, which included empowering principals to compensate and to fire teachers, were never implemented, in part due to the teachers unions’ resistance to policies that would diminish job security. (Government instability played a role, too.)

The agreement reached in the wee hours of Tuesday night aims to implement some of those decades-old recommendations.

The Finance Ministry agreed to significantly raise the salary of beginning teachers to 9,000 shekels ($2,650) a month, while senior teachers are getting a smaller raise. The raise means that new teachers will make 70% higher than minimum wage, up from 25% higher a decade ago — though they will still earn less than the average salary in Israel and just a fraction of what Israelis can earn in the high-tech sector.

Principals will also be able to give bonuses of roughly $300 to teachers they consider high-performing, and all teachers will get a bonus of roughly $3,000 after their first three years, as an enticement to stay in the classroom for longer.

Teachers will also give up five holidays to reduce pressure on working parents — but will get time off between Yom Kippur and Sukkot each year, as well as two additional vacation days to use when they choose.

In a major shift, the unions also agreed to allow merit to play a role in wages and in dismissals at the discretion of school principals. Additionally, new teachers will have to wait three years before getting tenure — meaning that teachers who appear early on not to have what it takes can be dismissed easily. 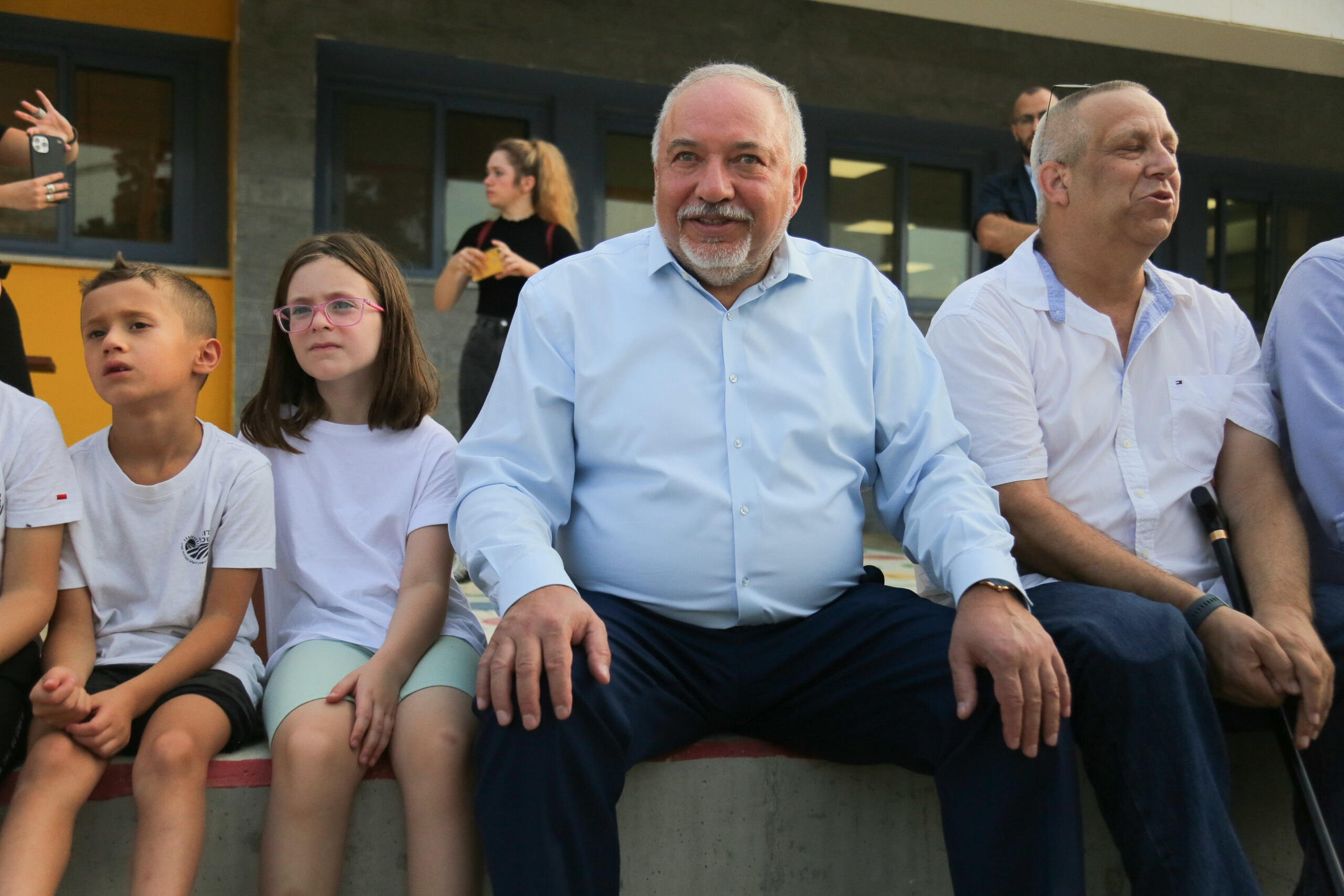 “We were able to bring about profound changes never before seen in the education system in Israel,” Israeli Finance Minister Avigdor Lieberman said in a statement announcing the deal. “First and foremost, the principle has changed from rewarding solely based on seniority to also rewarding excellence, investment and achievements.”

He also emphasized that the deal, which runs through 2026, would come as a relief to families weary of not knowing whether school would be in session or teachers would be on strike.

“We conclude a complex period at the end of which we provide certainty to parents and students for at least the next four and a half years,” Lieberman said. “I wish all Israeli students a fruitful and successful school year.”

Less than 24 hours later, Israel’s 2.5 million schoolchildren were on their way to class.