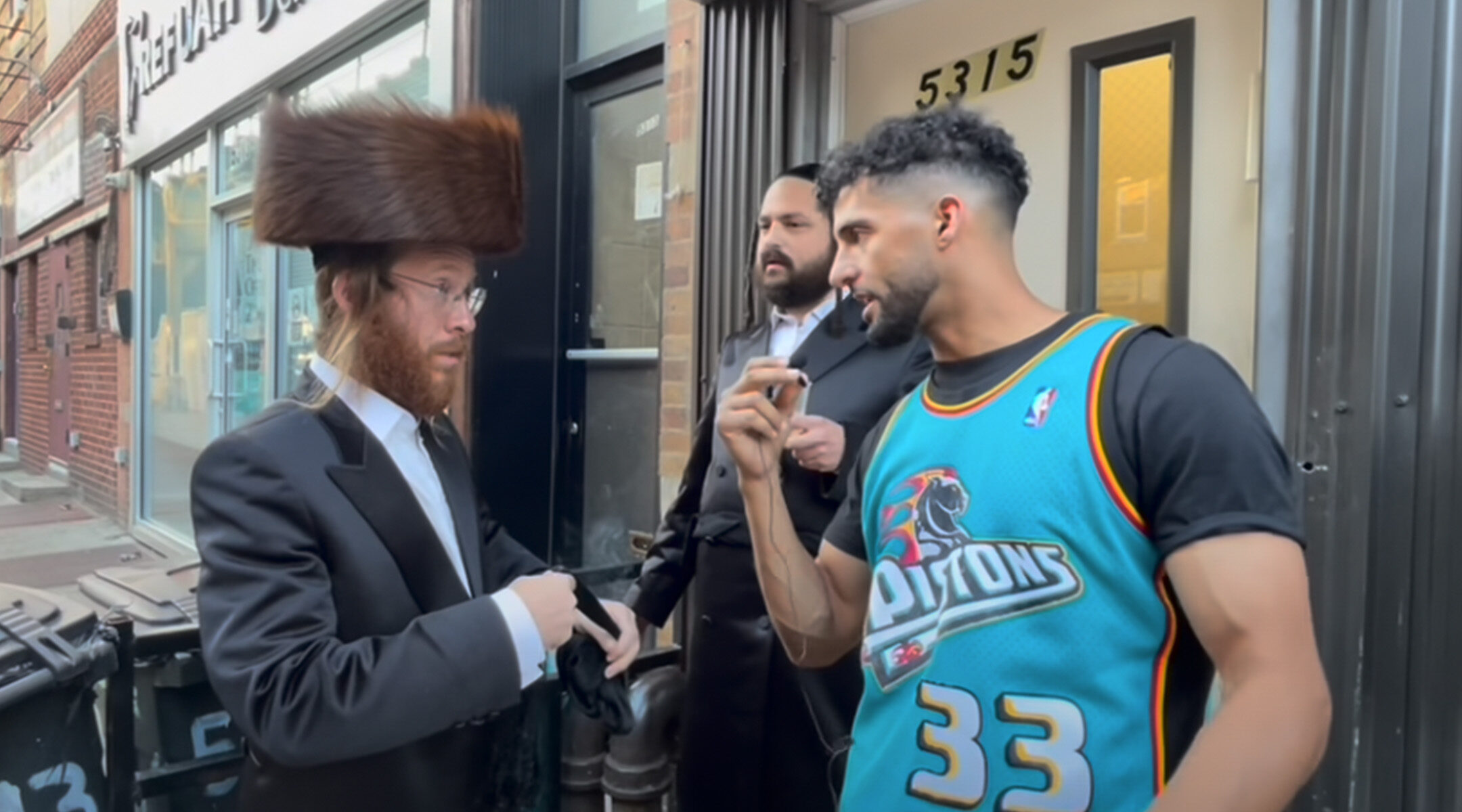 Abdulla Almasmari, otherwise known as YouTuber Dulla Mulla, put out a video where he interviewed Orthodox men in Brooklyn and asked their thoughts about the Israeli Palestinian conflict. (YouTube)
Advertisement

(New York Jewish Week) — A video of a self-described comedian approaching Hasidic Jews on the streets of Brooklyn and asking them their thoughts on the Israeli-Palestinian conflict has gone viral on Orthodox Jewish twitter.

That’s not because observant Jews are happy about the video, which has been reshared thousands of times and has had more than 250,000 views on YouTube since it was posted by Abdullah Almasmari, also known as Dulla Mulla, on Aug. 26.

Rather, it’s because many have deemed the video — in which Almasmari asks Orthodox passersby to, among other things, “justify Israel’s actions toward Palestine” — deeply offensive.

“It’s antisemitic to just go up to random US Jews and hold them accountable for Israel’s actions,” wrote Elad Nehorai, a writer who calls himself ex-Hasidic, after sharing a clip that was first put up on a Twitter profile called Hasidic. “Gross.” He shared a clip on Twitter, which led others in the Orthodox online world to take notice.

PSA: It’s antisemitic to just go up to random US Jews and hold them accountable for Israel’s actions. Gross. pic.twitter.com/Pdz6rcJ8j7

In the video, Almasmari approaches traditionally garbed men on the streets of Crown Heights and Borough Park on a Friday afternoon, as Shabbat approaches. One patron gives him a rabbinical and thoughtful response to a question about what he thinks about “the conflict,” but most outright ignore him or politely tell him to “have a good day.”

“It’s right on the foul line of almost overt antisemitism,” said Bashevkin, who is director of education for NCSY, the Orthodox youth movement. “Because I have a beard and payos I have to weigh in on Israel and Palestine for your Youtube content? I don’t think that’s fair.”

Attitudes toward Israel in the haredi Orthodox community are more diverse than some outside of the community might suspect. While Modern Orthodox Jews tend to consider themselves Zionists and have strong personal and political ties with the Jewish state, some haredi and Hasidic movements are indifferent to the country’s secular government on spiritual grounds or are even actively anti-Zionist.

This is not Almasmari’s first targeted prank videos aimed at the Jewish community. In March 2021, Almasmari, who appears to live in Detroit, went to a kosher shop in Michigan and recorded reactions from Jewish people after showing them a Palestinian flag with the words, “Free Palestine.” In another video, he goes into a grocery store and douses visibly Orthodox Jews with water from a spray bottle.

Almasmari has been critical of the Israeli government and has posted videos of himself at pro-Palestinian rallies.

Of course, some commenters on Twitter defended Almasmari. “He wasn’t holding them accountable for Israel’s actions, he was asking how they felt about the situation,” wrote “jpuxter,” who often shares pro-Palestinian tweets.

The YouTube video has positive comments underneath it, with one saying “best video I’ve seen this year so far, Free Palestine.”

One exchange in the recent Brooklyn video has gone particularly viral: A red-haired Hasid disarms Almasmari by saying he does not know about a conflict between Israel and Palestine.

“What actually are you talking about?” the Hasidic man says to Almasmari.

“Are they doing that?” the Hasidic man replies.

“What about the war between Israel and Palestine?” Almasmari asks.

“I don’t watch the news,” the Hasidic man says. “I thought there was a war in Ukraine. That’s crazy man, these wars gotta stop.”

Online, people have hailed the Hasidic man an “expert level troll” — a provocateur — for refusing to take Almasmari’s bait. Another Twitter user posted a meme comparing him to Aryeh Moshe Lieser, the Orthodox man who went accidentally viral earlier this year thanks to his monologue about the joys of cold seltzer.

A person close to the man in the video who wished to remain anonymous confirmed to the New York Jewish Week that this incident “was not staged.”

“He was harassing people in the streets,” the source said. “It was right before sundown Friday, when people are in a rush. Some people in the community complained about this guy. People felt intimidated by him.”

The source said that the Hasidic man in the video is aware that the clip has now gone viral and found it to be “ironic.”

Bashevkin noted that this is a “scary” time to be a Hasidic Jew because they are a visible minority. In July 2022, NYPD reported a 50% increase in hate crimes over July 2021, with antisemitic hate crimes up 114%. On Monday, the NYPD said it will increase its police presence in Williamsburg following a spate of recent attacks on Jews there.

The anonymous source in the community echoed this concern, saying that the video is “targeting specific communities.”

Rabbi Mordechai Lightstone, who directs a tech and digital media project for the Chabad-Lubavitch Hasidic movement, called Almasmari “a troll” on Twitter.

“Congratulations to this troll, who appears to be the first person in history to be completely ghosted by every Lubavitcher on the streets ever,” said Lightstone, who lives in Crown Heights.

New York City Councilmember Kalman Yeger, who represents Borough Park, said in a statement to the New York Jewish Week that video shows “the incredible lengths antisemite will travel to harass identifiably Orthodox Jews; and how incredibly polite Orthodox Jews are in the face of antisemitism.”

“Other than that, this is just more of the same: harassing Jews for entertainment,” Yeger said.

Flatbush Shomrim, a community watch group in Brooklyn, confirmed that Almasmari came to the neighborhood and said they were “looking into it.”

“Holding Jews collectively responsible for actions of the State of Israel” is listed as an example of antisemitism under the International Holocaust Remembrance Alliance working definition of antisemitism.