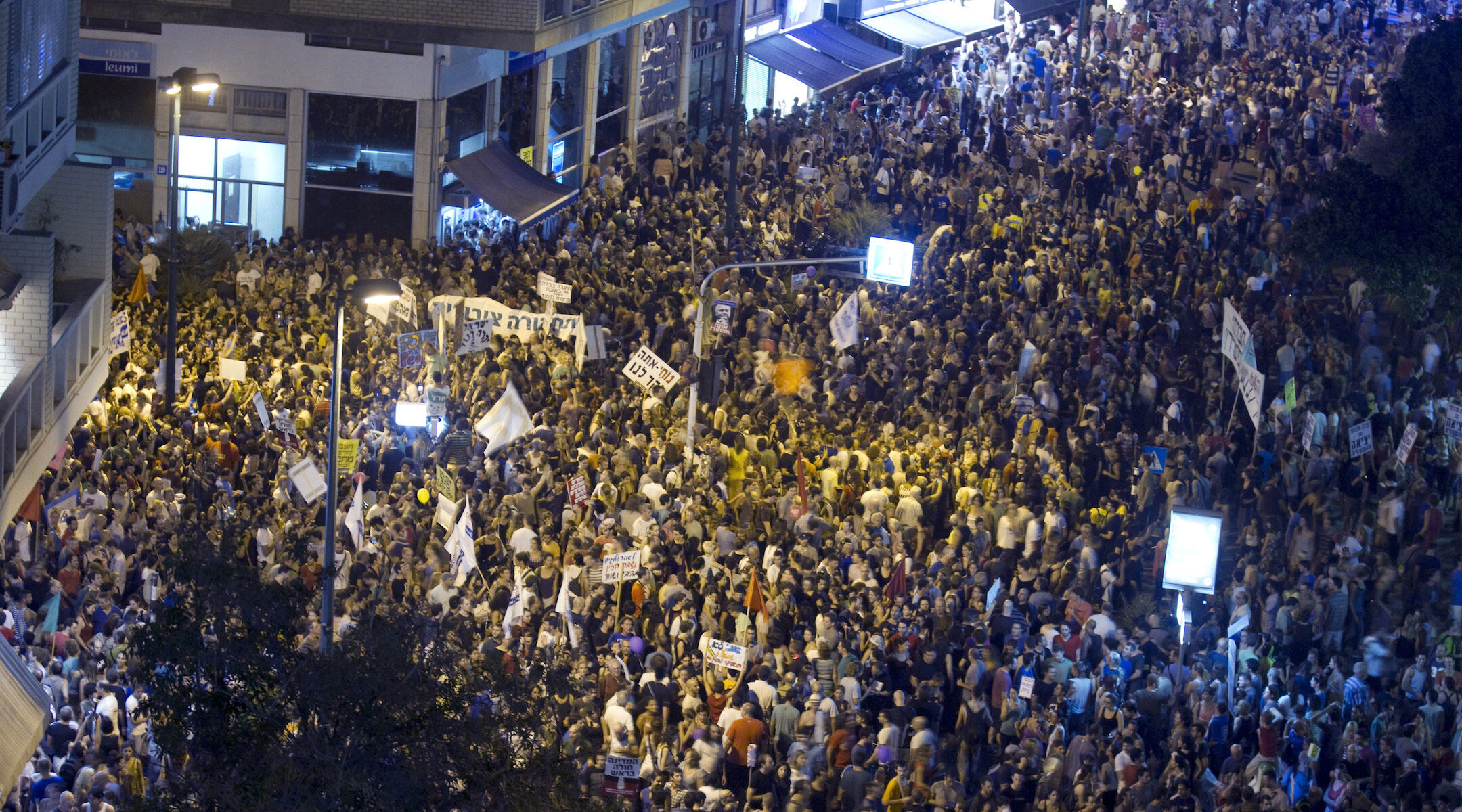 An estimated 400,000 Israelis demonstrate in the center of Tel Aviv to protest against rising housing prices and social inequalities in the Jewish state, Sept. 3, 2011. (JACK GUEZ/AFP via Getty Images)
Advertisement

(JTA) — Imagine if little was known about the extent of racial inequality in the United States because the government followed a policy of lumping together Blacks, whites, Hispanics, and Asians in official statistics.

In Israel, such a policy has been in place for decades, making it difficult to understand inequality among Jews of different ethnicities — but that is about to change.

After decades of withholding statistics on socioeconomic differences between Jews of Ashkenazi or European origins, and those of Mizrahi or North Africa and Middle Eastern origin, Israel’s national statistical bureau decided last month to begin publishing data that is expected to shed light on one of the most politically charged divisions in Israeli society.

It will become possible to learn far more than is currently known about gaps in wealth, education and other factors between Ashkenazi and Mizrahi Jews.

Historically, and to a significant extent still, Ashkenazi Jews have populated Israel’s upper class while Mizrahi Jews have been poorer as a whole, with discriminatory policies from Israel’s early years to blame for the inequality. This pattern maps onto Israel’s electoral landscape, shaping the country’s politics.

Last year, sociologist Sigal Nagar-Ron wrote an academic article tracing how Israel’s Central Bureau of Statistics helped enshrine the two categories of Jewish ethnicity during Israel’s first few decades, and then, starting in the 1980s, largely abandoned such metrics, under the notion that differences among Jews of various background would disappear over time in the Israeli melting pot.

She argued, however, that the bureau’s decisions have led to a “statistical blindness” about current-day inequality. Much more is known, for example, about gaps between Arabs and Jews because the bureau publishes extensive statistics comparing people based on those categories.

Ignorance, however, doesn’t absolve the bureau of responsibility over the inequality among Jews of different backgrounds, Nagar-Ron told Israeli newspaper Haaretz last year. She said Israeli policy “hampers the ability to examine the role of ethnicity in the mechanisms of inequality in Israel today and fix the situation.” Other Mizrahi social justice advocates, such as members of the Mizrahi Democratic Rainbow and the feminist Ahoti movement, have made similar arguments in decades past.

Researchers have been able to estimate the level of inequality among Jews in Israel through proxies such as education, with findings that Ashkenazi Jews are vastly overrepresented in university faculties and among academic degree holders. These studies try to inform a public arena that becomes regularly inflamed when politicians and celebrities comment on Ashkenazi-Mizrahi relations.

When Nagar-Ron asked the bureau to make the data available last December, she was rebuffed by the bureau’s head at the time, Danny Pfeffermann. “Mizrahim and Ashkenazim? That story is from 50 years ago. It’s irrelevant today. Everyone is mixed,” he said, according to Nagar-Ron.

Pfeffermann’s impression about the rate of birth from intermarried couples, which is widely shared among Israelis, appears to be off. Recent research estimates that as of 2018 only about 15% of Israeli Jews ages 25-43 were of mixed heritage. The proportion of Israelis of mixed backgrounds appears to be rising but it could take decades for them to become a majority.

By July, when the Association for Civil Rights in Israel filed a formal petition on the issue, the bureau had someone else at the helm. The newly installed national statistician, Yoel Finkel, responded less than a month later with a letter announcing a policy change.

“We understand how significant this matter is to the analysis of Israeli society and related issues, and we are aware that ethnicity in Israeli society is a key variable in social stratification, and in the creation of gaps and their perpetuation,” Finkel wrote.

In the next few months, a team of demographers and other experts at the bureau will come up with a plan for calculating and publishing data on ethnicity, according to Finkel’s letter.

The plan centers on Israelis of the so-called third generation, those with grandparents who immigrated to Israel from different parts of the world. It’s a group that makes up more than half of Israel’s Jewish population and whose ethnic origin is invisible in national statistics.

One way to collect data on who is Mizrahi and who is Ashkenazi would be to ask people how they define their origin. But there’s also an objective metric available: For 94% of Israelis, the government already knows not only where they were born but also the country of origin of their parents and grandparents. That’s because Israel’s Population Authority and Interior Ministry keep track of immigration, births, deaths and marriages. The statistical bureau would need to cross-reference the other agencies’ data with its own to generate socioeconomic statistics.

Among Mizrahi social justice activists, the bureau’s decision is being celebrated as an important victory, according to Lihi Yona, a University of Haifa scholar who writes about how the lack of governmental recognition for the identity of Mizrahi Jews affects their standing in the legal system.

“Knowing more accurately where exactly Mizrahi Jews are still facing barriers and discrimination can help activists in knowing where to direct resources, and help to push the conversation to where it needs to be: how to fight discrimination rather than how to prove it exists,” Yona said.

She said denial of the existence of anti-Mizrahi discrimination is so pervasive that courts tend to overlook it.

“Similarly, while Israeli law dictates that policies of affirmative action secure representation of women, Palestinian citizens of Israel, Ethiopian Jews, and other minority groups, Mizrahi Jews are not considered a relevant group for affirmative action,” she said. “One of the reasons for this misguided belief is that data regarding discrimination against Mizrahim is scarce.”

Patterns of discrimination could be hiding in unexpected places, according to Yona, who gave the example of a recent study finding that, following traffic accidents, Ashkenazi victims are awarded higher compensation by Israeli courts than Mizrahi victims.

“There are so many other obscure dynamics of discrimination that the lack of data has prevented us from recognizing,” she said. “This [decision by the bureau] could lift the veil from these dynamics, shining a light on places that require our immediate attention.”

At the same time, Yona acknowledged, the data might also shed light on ways in which Mizrahi Israelis have advanced over the past few decades. Such data would add context to the rise of Mizrahi representation in the media and entertainment industries and among Israel’s ultra-rich and highly visible billionaire class.

In the political arena, ethnic identity can be a potent factor in how people vote — and how politicians campaign. For example, Likud, the party of Benjamin Netanyahu, who served as the longest-tenured Israeli prime minister before being defeated at the ballot box last year, has long commanded the support of many Mizrahi voters. Netanyahu is seeking to return to power this fall.

But the electoral strength of Mizrahi voters doesn’t translate directly into representation in government. A 2021 analysis by nonprofit newsroom Hashomrim found that Mizrahi Jews are still underrepresented. For example, Ashkenazi Jews have served atop major government ministries at about twice the rate as Mizrahi Jews over the preceding 20 years.

The move by Israel’s statistics bureau should be seen as a break from the country’s historic insistence on the melting pot concept, according to which differences among Jews are supposed to be erased in Israel, said Tamar Hermann, a senior research fellow at the Israel Democracy Institute.

She said a movement of sociologists has labored to show how the theory fails in practice, putting pressure on the government to acknowledge inequality.

“The idea was to see the Jewish group as a whole and not encourage fragmentation, but now the reality of the situation has forced itself upon this political agenda,” she said.