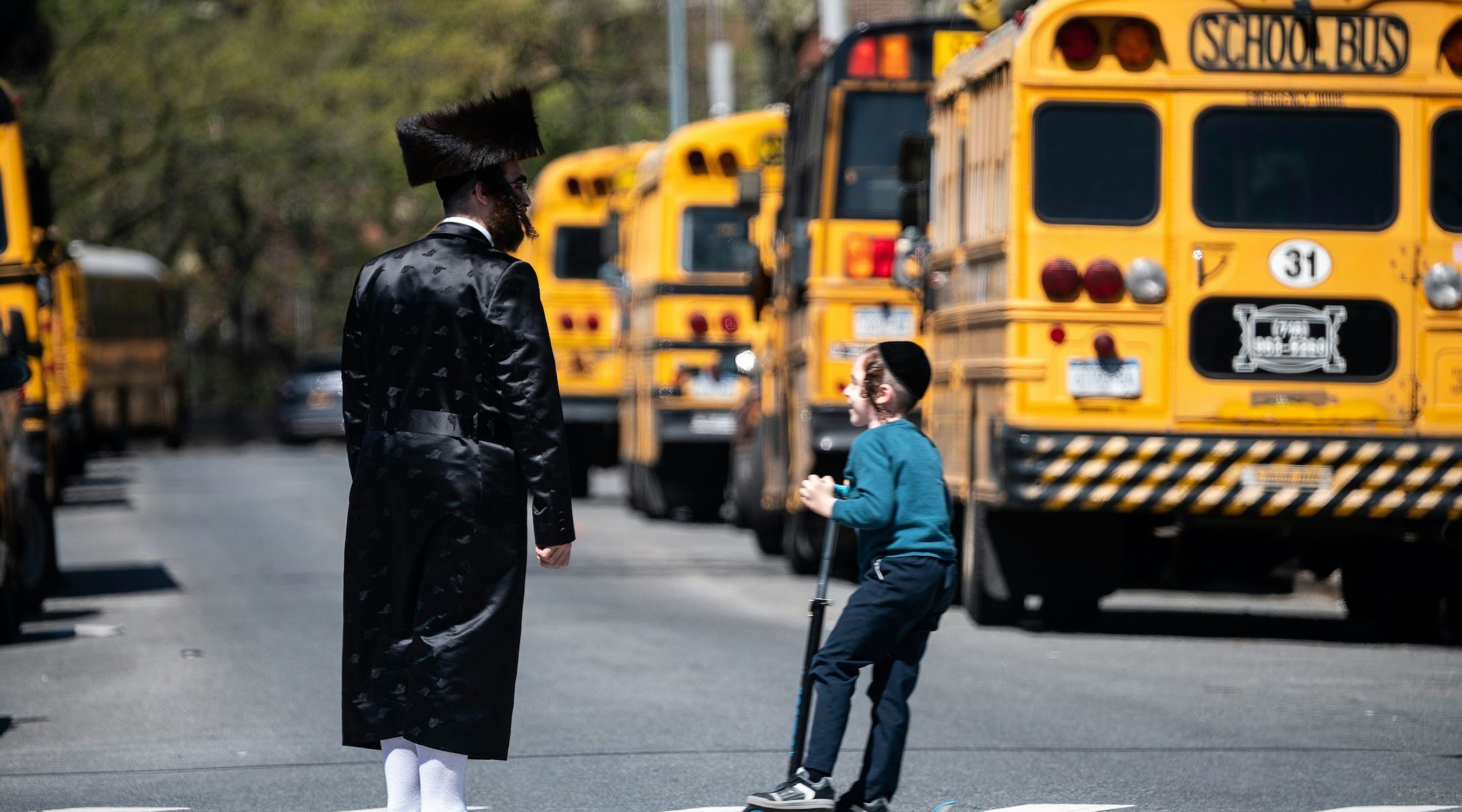 (New York Jewish Week) — New York City Mayor Eric Adams said he will complete an investigation into the state of secular education at Hasidic Orthodox Jewish schools that was started by his predecessor, Bill de Blasio, according to the New York Times.

A spokesperson confirmed Adams’ intent in a hotly anticipated investigative piece in the Times about the quality of secular education at Hasidic yeshivas in Brooklyn and Rockland and Orange counties.

Following complaints about the poor quality of secular education at the city’s Hasidic yeshivas, de Blasio initiated an investigation in 2015. The pandemic, however, put the investigation on hold. Since then, neither Adams, nor New York Gov. Kathy Hochul, nor her predecessor, Andrew Cuomo, have moved the needle on this issue — despite a state law requiring all non-public schools to provide an education that’s “substantially equivalent” to what is offered in public schools.

On Sunday, however, a spokesperson named Maxwell Young told the New York Times — apparently for the first time — that the Adams administration intends to resume and complete the city’s investigation. He also told the paper “that he believed schools should be culturally sensitive and meet high standards.”

Sunday’s investigation, by a longtime education reporter, Eliza Shapiro, and Pulitzer Prize-winner Brian Rosenthal, is the result of nearly two years of reporting that involved translating dozens of Yiddish documents, examination of thousands of pages of public records, and more than 275 interviews with individuals with ties to the yeshivas and Hasidic community.

The article, which the newspaper also published in Yiddish, cites test scores and other data and concludes “that generations of [Hasidic] children have been systematically denied a basic education, trapping many of them in a cycle of joblessness and dependency.” The article also allegations of corporal punishment, lack of government oversight and misuse of funds.

We are proud to be able to offer a Yiddish version of our investigation on Hasidic schools, so that it is more accessible for members of the Hasidic community. https://t.co/Nd0ermO8Zg

Despite failing to meet standards for the teaching of math, sciences and basic literacy, the Times reveals that Hasidic boys’ schools “have found ways of tapping into enormous sums of government money, collecting more than $1 billion in the past four years alone.” (Hasidic schools are separated by gender, the Times notes, and while girls receive “more secular education because they study fewer religious texts,” the article says that “they, too, are struggling.”)

Notably, the Times piece states that some 50,000 boys attending 100-plus yeshivas in Orthodox enclaves in Brooklyn and the Lower Hudson Valley — where New York’s approximately 200,000-person Hasidic population is concentrated — “are suffering from levels of educational deprivation not seen anywhere else in New York.” Only nine schools in the state, according to the Times, had less than 1% of students testing at grade level in 2019 (the last year with full data available). All were schools for Hasidic boys.

Nonetheless, the Times reports that more than 50 new boys’ schools have opened in the past 10 years. They have received an increasing amount of money from the government: The reporters analyzed “dozens of federal, state and local programs” — looking “most closely” at 2019 —  and found the boys’ yeshivas received more than $375 million during this time.

The Times notes that these schools “receive far less per pupil than public schools.” And yet, the report concludes, “they appear to get more government funding on average than other private schools in the state, including other religious schools.”

Hasidic voting blocs can deliver tens of thousands of votes to their chosen candidates. “There’s a significant population that you ignore at your peril,” political consultant Evan Stavisky told the New York Times. “They are part of the fabric of New York politics.” The yeshiva system plays a key role in getting out the vote; at some schools, as per the Times, students who bring in their parents’ “I Voted” stickers can earn rewards.

Adams has close ties to the city’s haredi Orthodox community. During his campaign, he won the support of a faction of Brooklyn’s Satmar Hasidic community, and his senior advisor, Joel Eisdorfer, was the first Hasidic Jew to join his administration’s senior staff. (Adams’ tight relationship with haredi Orthodox leaders was recently a cause for concern among more liberal Jews — in May, the mayor met with 55 women rabbis and cantors who wanted to highlight that a “Jewish leader” is “not just a man with a beard.”)

Adams’ spokesperson, Young, said “the mayor’s decisions are not influenced by political support,” the Times reported.

Former mayor de Blasio told the New York Times that, prior to the pandemic, he had taken the complaints about the Hasidic schools seriously. “Had it not been for the demands of Covid, we would have finished the investigation, put the willing schools on a corrective action plan and urged the state to sanction the unresponsive schools,” he said. “And that’s what needs to happen now.”

Hasidic communal leaders are rigorously defending their educational system and have made staving off oversight of its schools a top priority. Prior to the publication of the New York Times piece, Simcha Eichenstein, a Hasidic State Assembly member from Borough Park, Brooklyn, published a column in the New York Sun attacking the investigation and rebutting its conclusions. “The summary makes clear that the forthcoming article in the Times will defame an entire community based on sometimes anonymous critics, cherry-picked data, and outright lies,” he wrote.

Eichenstein reiterated these complaints on Twitter on Sunday morning, calling the article “a pitiful rehash of cherry picked data and inaccuracies, peddled by the same group obsessed with Orthodox Jews. What’s clear is that the NYT is not interested in the positive value of our schools, just spreading lies for clicks.”

The result of a two year @nytimes investigation is a pitiful rehash of cherry picked data and inaccuracies, peddled by the same group obsessed with Orthodox Jews.

What’s clear is that the NYT is not interested in the positive value of our schools, just spreading lies for clicks.

Nearly four years after they were proposed, final revisions to the New York State Education Department’s regulations for secular education at yeshivas and other non-public schools are expected to go to a vote by the state’s Board of Regents on Monday and Tuesday. Meanwhile, the New York Times plans to continue its investigation into secular education at haredi Orthodox schools: the paper has published a callout for those with experiences in Hasidic schools to share their stories.