At ‘The Fabelmans’ premiere, Steven Spielberg discusses how his Jewish identity is portrayed in the autobiographical film 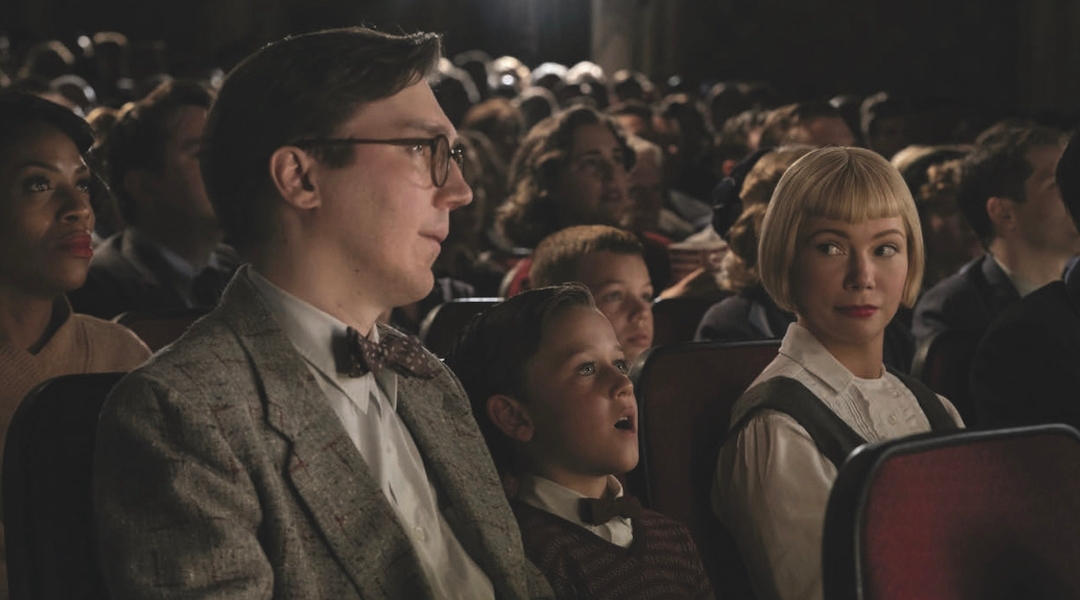 From left to right: Paul Dano, Mateo Zoryna Francis-Deford and Michelle Williams as fictionalized members of Steven Spielberg's family in his film "The Fabelmans."(2022 Universal Pictures and Amblin Entertainment)
Advertisement

TORONTO (JTA) — It would be difficult to debate what Steven Spielberg’s “most Jewish” film has been, after a career with highlights such as “Schindler’s List” and “Munich.” But it’s now clear what the famed director’s most personal film is.

On Saturday night, Spielberg introduced “The Fabelmans,” his upcoming semi-autobiographical movie about his Jewish upbringing and his formative early years as an aspiring filmmaker, at a post-screening Q&A at the Toronto International Film Festival, where its debut earned a two-minute standing ovation and subsequent Oscar buzz in early critic reviews. Spielberg made no attempt to disguise the fact that the story is based on his life.

“It’s not complicated,” he said. “This is something, obviously, that I’ve been thinking about for a long time.”

The moderator of the Q&A, the festival’s CEO Cameron Bailey, noted that Spielberg grew up in a Jewish family “in mostly non-Jewish environments.” He asked the director about his “growing engagement with your Jewish identity” throughout his career, and what it was like to “weave that into the film.” Jewish audiences have been highly anticipating how the film would incorporate Spielberg’s Jewishness since the official announcement that production was underway last year. The three-time Oscar winner co-wrote the script with his frequent collaborator Tony Kushner, right after the duo finished their work together on the recent “West Side Story” remake.

“I like very much the sort of easy way that Jewishness lives in this movie. It’s a very profound part of Steven’s identity, and of the Fablemans’ identity,” Kushner said at the talk. “But it’s a movie that’s about Jewish people, rather than entirely or exclusively about Jewishness or antisemitism or something. So it’s not a problem, it’s who they are.”

The film, which follows protagonist Sammy Fabelman as he falls in love with filmmaking from early childhood through high school, quickly establishes the family’s Jewishness. As the film begins, the Fabelman family (whose surname sounds like Jewish wordplay on the idea of fables, or storytelling) is based in New Jersey, and Sammy notes that he knows which house is his by the absence of Christmas lights. The family at one point sings Hanukkah blessings, and later there’s a Shabbat dinner with challah, kugel and brisket on the table.

The family then relocates to Arizona, and then Northern California, where it’s made clear there are far fewer other Jews around. In Phoenix, they are visited by Sammy’s old-world immigrant great uncle (Judd Hirsch) who tells tales of dealing with “Jew-haters” when he was in the circus, before darkly warning Sammy of how he may one day have to choose between his family and his art. These words are proven prophetic at a key moment later in the film.

Hirsch, who is Jewish, said in the Q&A that when he asked Spielberg about “the real guy” his character was based on, the director responded that he “never understood a word he said.” The director added that this was due to the Eastern European relative’s “thick accent.”

In the California part of the story, when he’s a high school senior, Sammy is bullied by antisemitic jock classmates who call him “Bagelman.” Sammy later dates a Christian girlfriend who tries to get him into Jesus.

Spielberg said that the antisemitic bullying he faced was “only a small aspect of my life… it isn’t any kind of governing force in my life. But I was made very, very aware of being an outsider, early on.” He added that it was only two kids who did the bullying and that he doesn’t blame the school for the incidents.

“I think in proportion of the film, it’s an aspect of his experience in that moment,” Kushner said of that scene. “It’s part of his arc, Sammy’s arc, towards reclaiming film and figuring out things that film can do.”

The broader storylines of the film, which hits U.S. theaters in November, are also true to the details of Spielberg’s own life story. He was born shortly after World War II in Cincinnati, to a father who was a pioneering computing engineer and a mother who played the piano. Arnold Spielberg came from a family of Orthodox Jews; Steven attended Hebrew school as a child and had a bar mitzvah in Arizona. The family really did move from New Jersey to Arizona to California, he really had three younger sisters, and his parents really did split in the mid-1960s. As Spielberg grew into his filmmaking, divorce, absentee fatherhood and strained parent-child relations emerged as key themes in many of his movies. 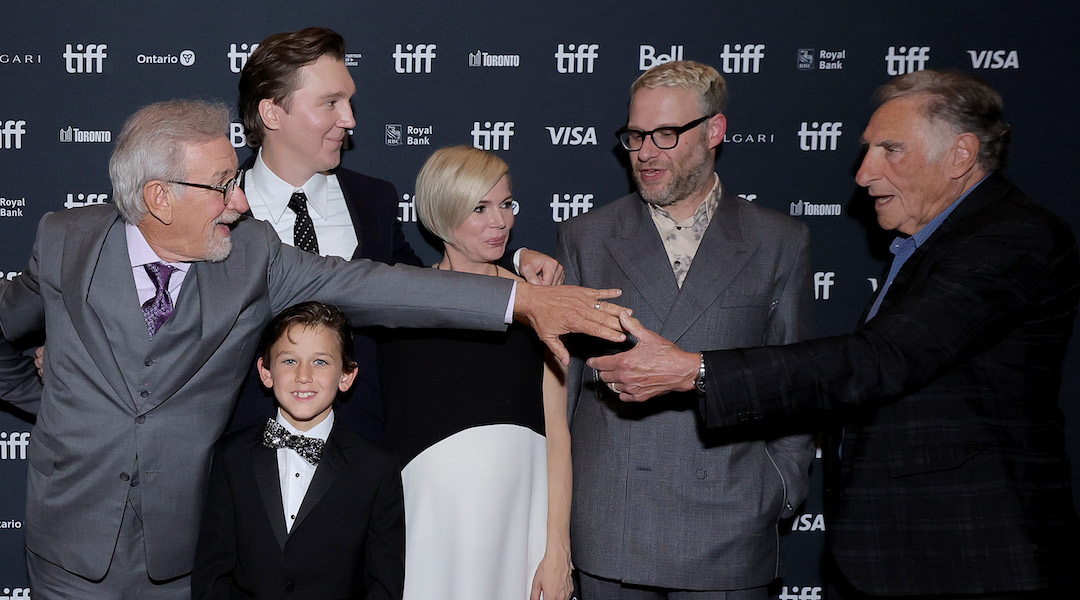 Spielberg also did make amateur 8 mm films throughout his childhood before heading to Hollywood in the late 1960s and beginning his career as one of the most successful directors in history.

The film stars Paul Dano and Michelle Williams, neither of whom are Jewish, as Sammy’s parents. Seth Rogen — who as a character in his 2007 movie “Knocked Up” famously praised Spielberg’s “Munich” as a movie about “Jews kicking ass” — plays the father’s best friend who looms large in the family’s marital struggles.

Spielberg and Kushner had discussed the director’s early life and a project about it for years — as early as 2005, when they were working on “Munich,” Kushner said. (Spielberg claimed in the Q&A that they began speaking about it while working on “Lincoln” in 2012.)

“Tony kind of performed the function of a therapist,” Spielberg said about their writing process. “I was his patient, and we’d talk, and I talked for a long time, and Tony fed me and helped me through this. But when COVID hit… we all had a lot of time, and we all had a lot of fear. And I don’t think anybody quite knew in March or April of 2020 what was going to be the state of the art, and the state of life, even a year from then. And I think in that sense I felt… if I was going to leave anything behind, what is the thing that I really need to resolve and unpack? My mom, my dad, and my sisters… it wasn’t now or never, but it almost felt that way.”

But don’t take this film as a sign that the 75-year-old Spielberg is slowing down, he said.

“It is not because I have decided to retire and this is my swan song,” Spielberg said.