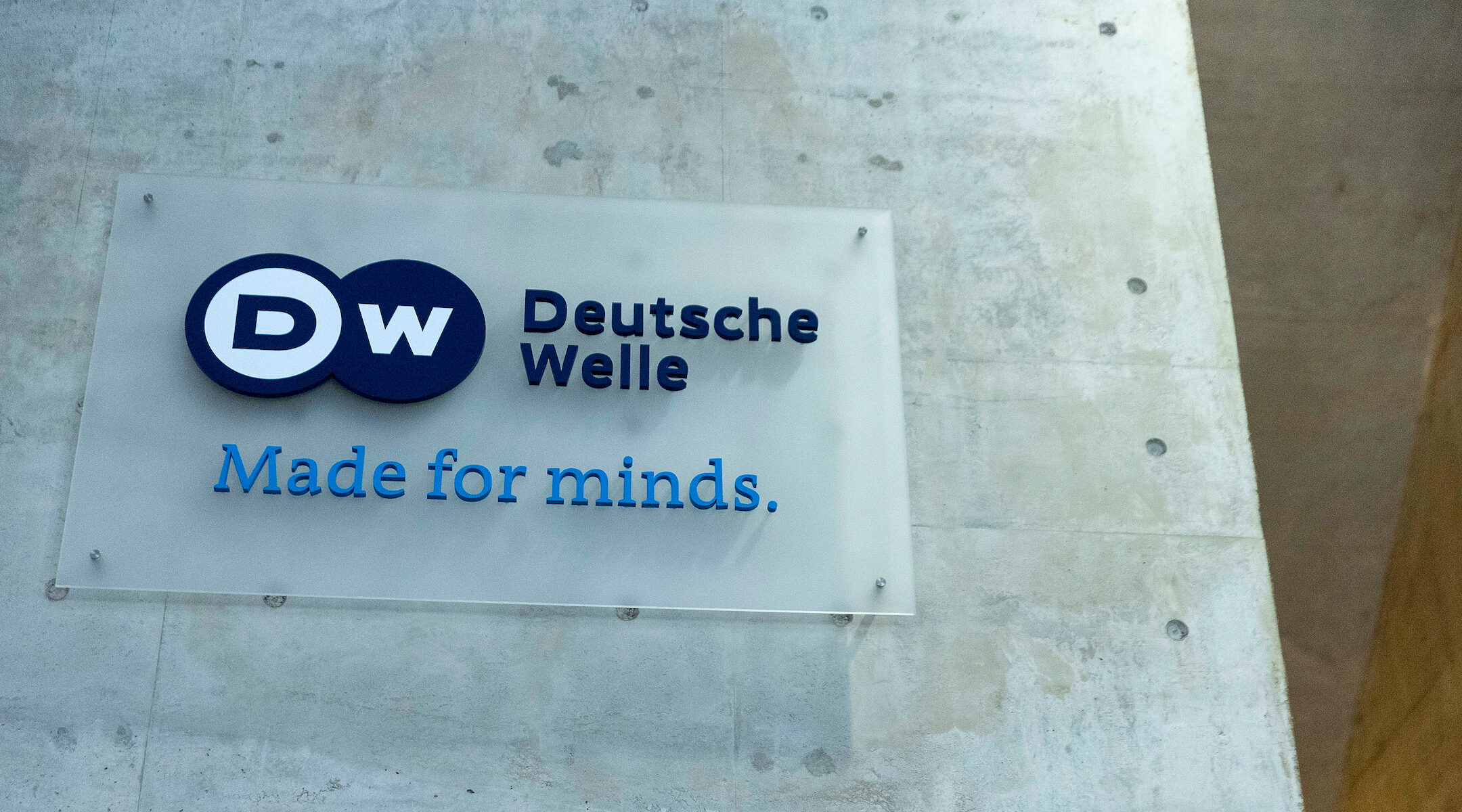 The Deutsche Welle logo is seen on the foyer of the German broadcaster's Berlin location, March 2, 2022. (Carsten Koall/picture alliance via Getty Images)
Advertisement

(JTA) — Germany’s public broadcaster, Deutsche Welle, has revised its code of conduct to require support for Israel’s right to exist, and employees who fail to do so may now be fired.

The move announced Sept. 1 preceded a court order last week that DW reinstate a former employee fired who was fired after the company determined she had made comments about Israel that could be construed as antisemitic. In all, seven employees from the broadcaster’s Arabic service were let go last year on similar grounds, and so far two have successfully sued DW for reinstatement.

The revised conduct code appears to be timed to strengthen the company’s hand in such cases in the future. DW spokesperson Vera Tellmann told the Jewish Telegraphic Agency in an email that the company “is awaiting the reasons for the verdict in one case and reserves the right to take further legal action.”

DW is not the only German media company to expressly endorse Israel’s right to exist. In 1967, the Axel Springer company, one of Germany’s biggest media conglomerates that now owns Politico and Insider, established “corporate principles” that include “support [for] the Jewish people and the right of existence of the State of Israel.”

The DW code made public on Sept. 1 declares that “Germany’s historical responsibility for the Holocaust is also a reason for which we support the right of Israel to exist.”

It also adds that “discrimination of any kind, such as sexism, racism and antisemitism… can have consequences in terms of labor law, including dismissal.”

Tellmann told JTA that labor law consequences would be applied “depending on the severity of the violations.” Denial of Israel’s right to exist would be such a violation, she added.

Five years ago, Germany formally accepted the International Holocaust Remembrance Alliance’s working definition of antisemitism, in a move designed to provide clarity for the prosecution of related crimes. The definition includes denial of Israel’s right to exist as a form of antisemitic speech. Critics of the IHRA definition, including some Jewish progressives, say it has a chilling effect on free speech, although it does not categorize all criticism of Israel as antisemitic.

It is already illegal in Germany to disseminate Nazi propaganda and to deny the Holocaust. Violations are punishable by fines or prison terms.

In addition, Germany has barred calls for Israel’s destruction in anti-Israel demonstrations, confiscating posters and prosecuting protesters based on the chanting of some slogans, noted Berlin-based attorney Nathan Gelbart, former chair of the United Jewish Appeal in Germany.

“There is only one people whose right of self-determination is being denied and questioned consistently,” Gelbart, who represents various Jewish and pro-Israel organizations, wrote in an email to JTA. “Therefore it is adequate and justified to name support of the right of the State of Israel to exist in the code of conduct at DW.”

He added that the IHRA definition addresses “modern antisemitism, which is not only right-wing based hatred against Jews but is also dressed in political slogans disguised as Israel criticism.”

The European Legal Support Center, which advocates for Palestinians across Europe and the United Kingdom, expressed a different view of the IHRA definition in responding to the situation surrounding Farah Maraqa, the Palestinian Deutsche Welle journalist who recently won her reinstatement case.

“This case is illustrative of a worrying trend in Germany of institutionalised silencing of Palestinian voices and narratives by employing malicious practices,” the ELSC told Al Jazeera. “It depicts how the anti-Palestinian sentiment and the institutional use of the IHRA definition can lead to severe infringements upon the freedom of expression and freedom of the press.”

Tellmann told JTA that the wording in the code of conduct is based on the IHRA working definition. “The IHRA is also explicitly cited (and linked) in the Chief Editor’s Journalistic Guidelines, as are several examples that are part of the IHRA definition,” she added, noting that DW also had consulted with the commissioner for Jewish life in Germany and various civil rights groups: the Fight Against Anti-Semitism, the Competence Center for Prevention and Empowerment, the Berlin-based anti-racism advocacy group Amadeu Antonio Foundation and the Anne Frank Educational Center.

On Sept. 7, DW also added a terse definition of antisemitism to its website:  “Antisemitism is a hostility toward Jews based on nationalism, Social Darwinism and racism. It was a central idea of National Socialism and ultimately led to the Holocaust.”

While the definition of antisemitism is narrow, the company’s revised code of conduct introduced Sept. 1 does include Israel. DW, it reads, rejects “all forms of discrimination including sexism, racism and antisemitism. Germany’s historical responsibility for the Holocaust is also a reason for which we support the right of Israel to exist.”

Tellmann, in her email to JTA, said the code had also added “a reference to DW’s underlying rules and regulations” to ensure that they “also apply if they are not explicitly mentioned” in the code of conduct.

Maraqa was one of seven employees fired from the broadcaster’s Arabic service in February 2021 after an external investigation commissioned by DW found they had crossed the line with statements made both on and off the job. According to the Bild newspaper, one of the terminated journalists had called Israel a “cancer that should be cut out.” Another wrote in a 2018 guest essay that a “Jewish lobby controls many German institutions” in order to prevent criticism of Israel. In 2019, a freelancer and trainer at the DW Academy compared Jews to ants that had invaded “through our weak points.” The specific journalists who made these statements were not named.

In response to the revelations, DW also announced in December 2021 the termination of its cooperation with the Jordanian broadcaster TV Roya. According to Tellmann, the relationship with Roya was “audited according to a newly introduced system. Based on the results, the management will soon decide on a possible continuation of the cooperation — provided that it does not violate DW values.”

A new internal team on “Anti-Semitism, Jewish Life and Israel and the Palestinian Territories” was established, with seven editors, Tellmann said, adding that the broadcaster’s office in Israel was also beefed up with additional staff.

Maraqa is the second fired employee — after Maram Salem — whom courts have ordered DW to rehire.

Giovanni Fassina, director of the ELSC, told Al Jazeera that he hoped Maraqa’s win “sends a clear message that [Deutsche Welle] should stop their censorship practices.”