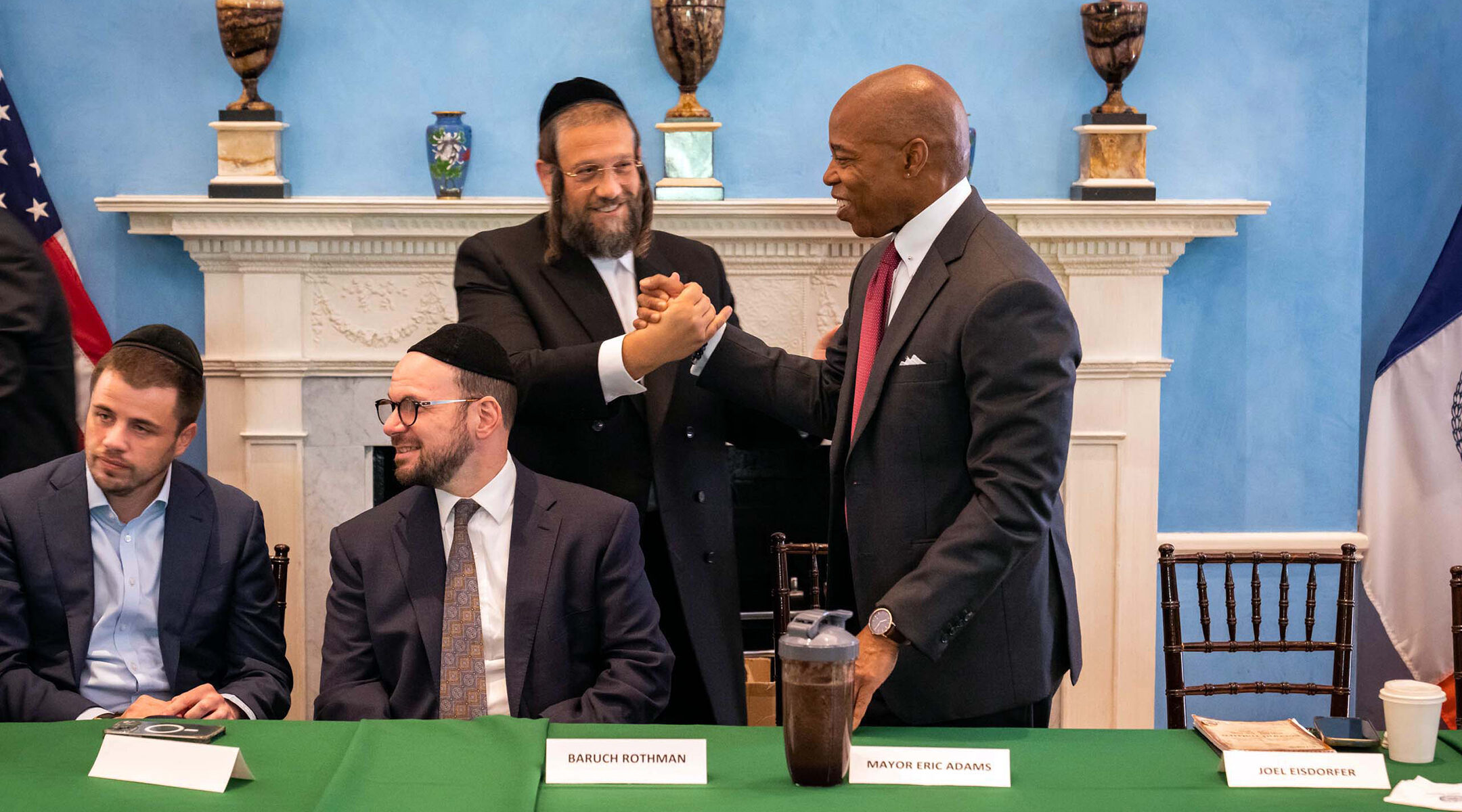 Planned ahead of the Jewish New Year — which begins on the evening of Sunday, Sept. 25 — the meetings seemed designed to showcase the mayor’s support for Orthodox Jewish New Yorkers at a time in which many in the community are concerned about crime, in general, and antisemitic attacks, in particular.

At the same time, the mayor called upon the Orthodox community for their continued support, particularly on the issue of bail reform, which he claims has returned dangerous criminals to the streets.

On Monday, Adams held an invitation only meeting with members of the haredi Orthodox press, including representatives from Hamodia, Der Yid and Yeshiva World News. On Tuesday, he had a sit-down with “our Jewish community leaders,” as he called them on Twitter — a mostly male and Orthodox group of leaders that included Rabbi David Niederman, executive director of United Jewish Organizations of Williamsburg and North Brooklyn; David Greenfield, CEO of Met Council, the anti-poverty group, and Satmar activist Rabbi Moishe Indig.

Participants were permitted to report on the meeting to their audiences, but two sources told the New York Jewish Week that they were cautioned by the mayor’s office to not share information to press outside of the meeting.

Absent from the meeting were any of the progressive rabbis who advocated for a seat at the mayor’s table back in May.

Adams, the former Brooklyn Borough President, has a close relationship with Brooklyn’s Orthodox Jewish community, whose voting bloc helped propel him to victory in the 2021 mayoral election. He also has many Orthodox members in his cabinet and staff, including Senior Adviser Joel Eisdorfer.

A City Hall spokesperson told the New York Jewish Week in a statement that the meeting was held to discuss “the administration’s efforts to support the Orthodox Jewish community, as well as efforts to further prevent antisemitic hate crimes and attacks.”

This morning I sat down for breakfast with our Jewish community leaders ahead of Sunday, which marks the beginning of Rosh Hashanah.

I want all Jewish New Yorkers to know that we're doing everything we can to keep them safe during this sacred holiday — and every day. pic.twitter.com/wK9j1IBPwe

Niederman told the New York Jewish Week that they discussed multiple issues including crime, antisemitism and education, but he wouldn’t go into specifics.

“The meeting was very encouraging,” Niederman said. “He took the time out of his busy schedule in respect of the upcoming high holiday to reassure us of the safety of the Jewish community.”

Niederman added that the relationship between the Orthodox community and a New York City is the “strongest it has ever been.”

“This is a continuous commitment of the bond that the mayor has with the Jewish community going back for so many years,” Niederman said. “The idea that you have capable Jews in the administration shows that the mayor values efficiency. He wants to show that everybody is represented.”

At Monday’s media meeting, Hamodia reported that Adams doubled down on his support for Gov. Kathy Hochul when asked about whether or not Orthodox voters should cast their vote for her opponent, the Jewish Republican Rep. Lee Zeldin.

Zeldin is a staunch Conservative who is supported by former President Donald Trump, which lends him appeal to an Orthodox voting bloc that has voted Republican in recent years, at least in presidential elections.

“I am a Gov. Hochul person,” Adams said. “That’s where my vote is going. I encourage others to vote Gov. Hochul.”

Adams added that Hochul was a “partner” who was “extremely helpful in the area of crime,” he said.

However, while Adams and Hochul are allies, there has been tension between the two on the subject of bail reform. Progressives say the cash bail system unfairly burdens the poor and leaves people more desperate and unstable. Critics of bail reform, meanwhile, say the system keeps violent suspects off the streets.

In April, Hochul tightened New York’s bail laws, making more crimes bail-eligible and gave judges more discretion in determining the severity of cases. Adams, who ran his campaign as a tough-on-crime mayor, hoped she would go further and said in August that “an insane, broken system” was allowing repeat offenders to be released onto the streets.

The issue is a high priority for the Orthodox community in Brooklyn, which has been concerned for months about a series of street attacks on identifiably Jewish residents. The NYPD reported 24 hate crimes against Jewish New Yorkers in August 2022, a 118 percent increase from last year. As a response to the attacks against Orthodox Jews in Brooklyn, the NYPD in August announced more patrols in Williamsburg due to the frequency of antisemitic attacks there.

In Monday’s meeting, Adams placed the blame on the recent bail reform laws, although there has been no confirmation that the perpetrators had previously been arrested or were out on bail. In a video from the media meeting posted by Yeshiva World News, Adams said that the Orthodox community needs to send a “clear message” that the current bail reform laws “are not acceptable.”

“We have turned into a country where we spend all our energy protecting people who commit crimes,” Adams said. “What about the people who are the victims of crimes?”

Adams encouraged the Orthodox community to write to lawmakers and the City Council and “ask them where they stand on these issues.”

An anonymous source who was in attendance at the media meeting said that Adams wanted to partner with Orthodox journalists to show that crime is “not as bad as the press is making it out to be.”

Adams believes “that traditional media does not reflect what the average New Yorker thinks,” the source said. “He was looking for different channels in how to get his message out there.”

“We have an extremely hostile media,” Adams said at the Monday meeting, according to the source’s reporting. “Traditional media has a product of selling hysteria. Reporters have become activists and not reporters. You can continue to write stories in a fair way that others are not going to do.”

In May, some 55 women rabbis and cantors representing Judaism’s liberal streams met with Adams and urged him to extend his outreach to the Jewish community beyond the Orthodox minority.

Rabbi Rachel Timoner of Congregation Beth Elohim in Park Slope, Brooklyn, one of the leaders of that delegation, told the New York Jewish Week that, in light of the meetings Adams had this week, she hopes the mayor remembers the “really constructive conversation” they had about “the role of women’s leadership in the Jewish community and how the vast majority of Jews are liberal and have women among their leaders.”

“We took a really big step forward this year in recognition of the actual demographic reality of Jewish New York,” Timoner said. “Most of us are progressive. I certainly hope that as we begin this next Jewish year, the mayor will continue to see the Jewish people as we really are.”