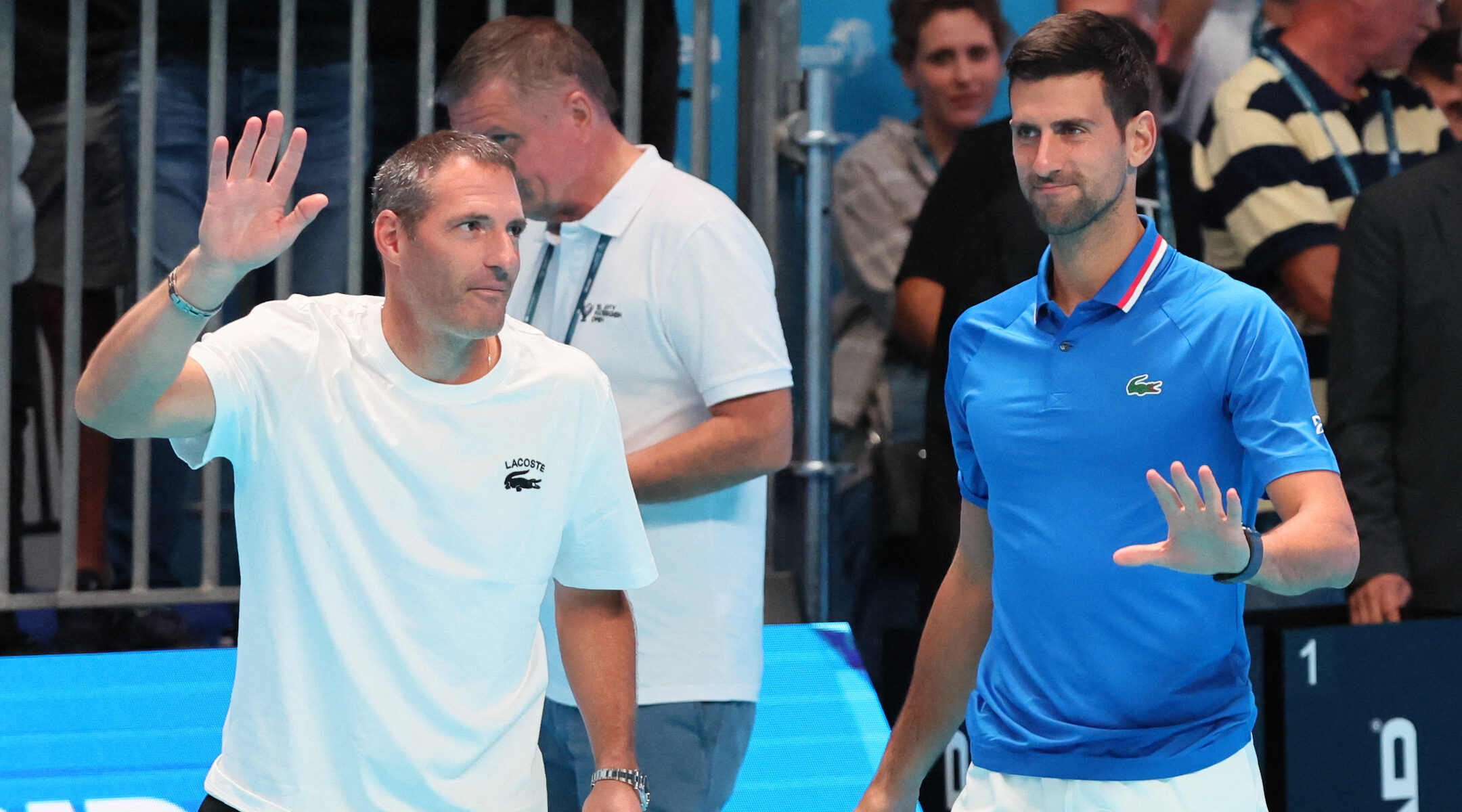 (JTA) — The Tel Aviv Open, a tournament in the high tiers of the pro tennis circuit, returned for the first time since 1996, and it brought emotional moments for multiple Jewish players.

Jonathan Erlich, a 45-year-old Argentine-Israeli who was known as one of the better men’s doubles players in the world during his prime, was set to play his last tournament alongside a famous friend and former doubles partner — 21-time Grand Slam winner Novak Djokovic.

Djokovic recorded an affectionate video before the Open for Erlich, greeting him in perfect Hebrew, calling him by his nickname “Yoni” and expressing his excitement to play with him again. Djokovic’s only career doubles title came at the Queens Cup in London in 2010 with Erlich, who was born in Buenos Aires but moved to Israel as a toddler and won the 2008 Australian Open title in doubles with fellow Israeli Andy Ram.

But Erlich suffered debilitating back spasms before the pair’s scheduled match this week and was forced to withdraw.

“I can say that even if I were 50% fit, I’d get to play, because I know that the crowd was waiting for my match, but unfortunately, I couldn’t do it,” Erlich told the Open’s website. “The pain was so huge that I could barely walk.”

Djokovic — who has courted controversy over his refusal to get vaccinated against COVID-19 and was hit with some online criticism by pro-Palestinian fans for playing in Israel — won his first match of the tournament on Thursday.

“The crowd here is very passionate about the sport, about tennis and I’m really, really happy to be here and to perform here in front of you, so thank you for your support,” he said after his match.

For the No. 17 player in the world, Diego Schwartzman, the tournament brought the opportunity for what was his first visit to Israel. Schwartzman, a pro tennis tour favorite among Jewish fans, played for a few minutes in a wheelchair with Yoram Gershony, an Israeli who won gold at the 2012 Paralympics.

But on Thursday, Schwartzman was eliminated from the tournament in the round of 16 by Frenchman Arthur Rinderknech, ranked No. 60. In an interview, Schwartzman said his recent string of quick losses have been due to his constant touring schedule, which have only given him a couple of weeks total at home in Buenos Aires since April.

He also said that he wants to return to Israel in the future.

“I will come back here for sure at some point in my life, on holidays or to play matches, I don’t know,” he said. 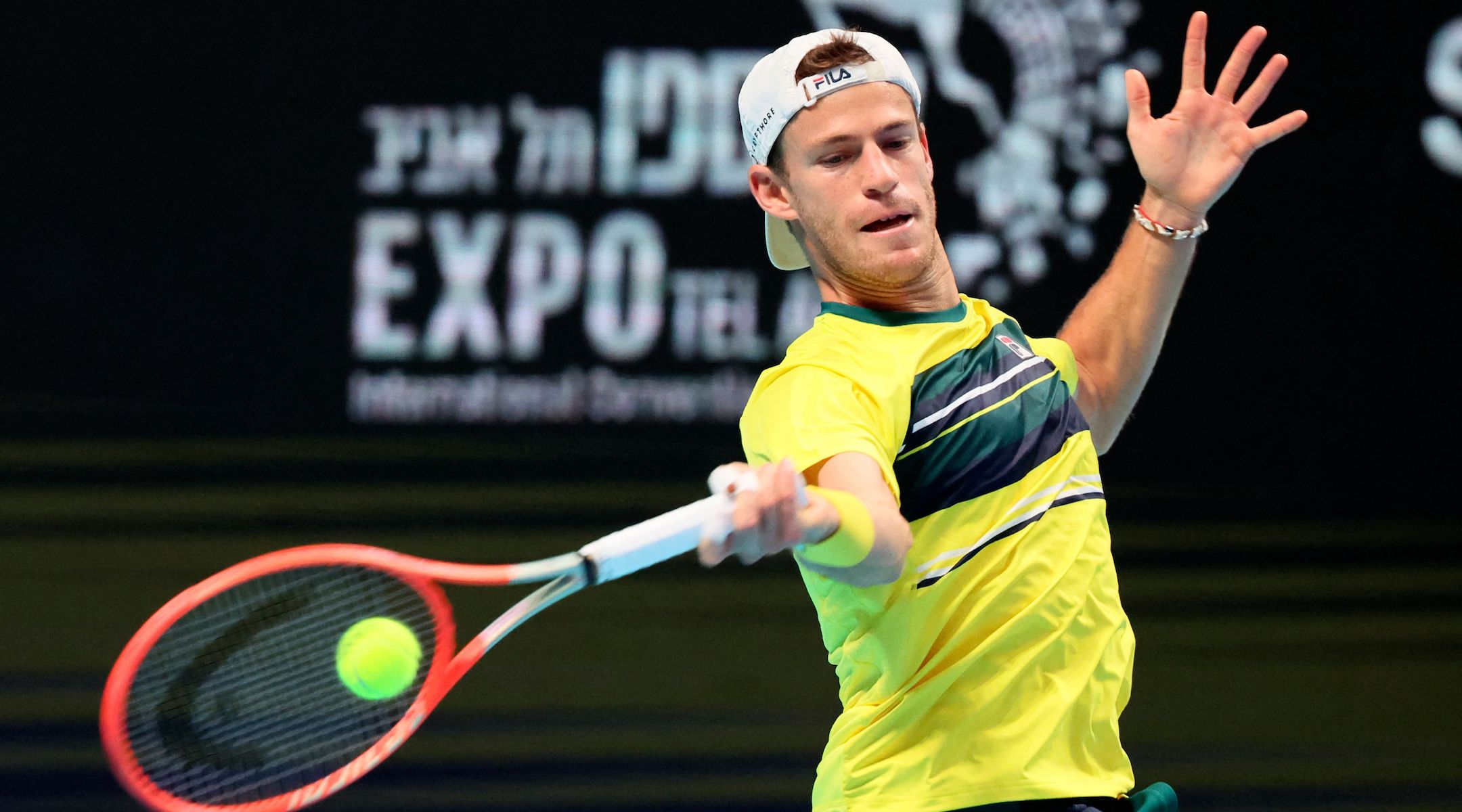 Diego Schwartzman returns the ball during a match at the Tel Aviv Watergen Open, Sept. 29, 2022. (Jack Guez/AFP via Getty Images)

The few other Israeli players in the draw have also been eliminated as of Friday.

The Tel Aviv Open was played from 1978 through 1981 and 1983 through 1996. Israeli tennis player Amos Mansdorf appeared in the final five times, winning in 1987, making him the only Israeli to win the event. Jimmy Connors won his final career singles title at the event in 1989. The tournament still holds the ATP record for the youngest winner of an ATP event: Aaron Krickstein in 1983, at the age of 16 years and 2 months.

It was scheduled to return again in 2014, but that year’s Gaza war forced a cancellation. The following year it was seemingly canceled for good.

In July, the Israeli Tennis Association and Watergen — an Israeli company that makes devices that can produce water from air — announced that they were bringing back the tournament, as the Tel Aviv Watergen Open.

“We have been working on this for a long time and are thrilled that our efforts to host a tennis tournament of this magnitude have paid off,” said Watergen President Michael Mirilashvili, a Georgian-Israeli real estate billionaire who bought the company in 2016.