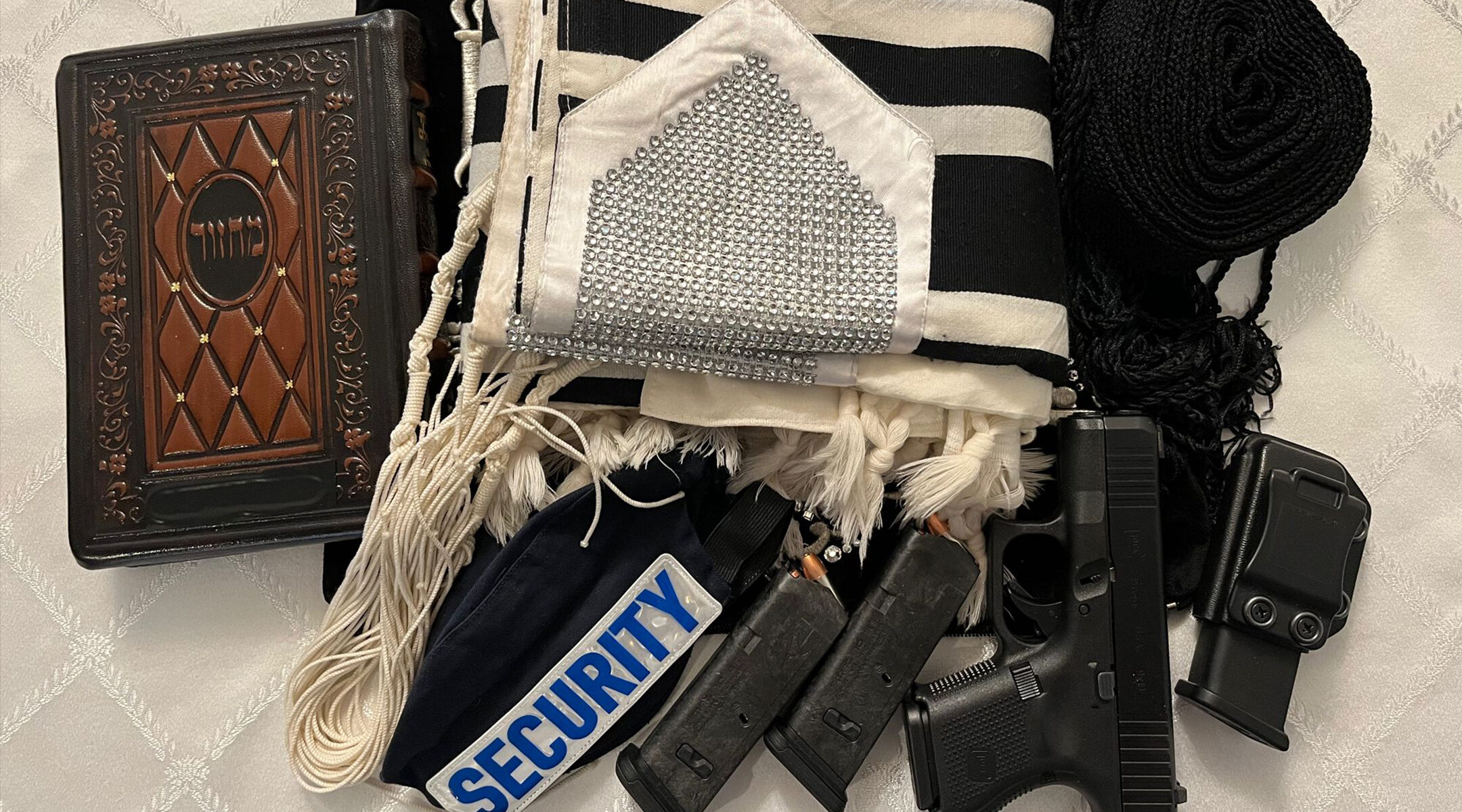 A New York Jewish gun owner took this photo of his weapons and and his Jewish paraphernalia.(Courtesy)
Advertisement

One group of Jewish gun owners has responded with a lawsuit, and separately a judge said he would block the state from enforcing parts of the law on constitutional grounds.

But some Jews are taking another tack: ignoring the law altogether.

The New York Jewish Week has spoken to Jews in New York City and the Lower Hudson Valley who say they are continuing to carry concealed weapons at shul. Their goal, most say, is to protect their synagogues at a time of increased antisemitism.

A Jewish first responder involved with security at his synagogue in Orange County, New York said that he “does not comply” with the state’s gun law. (Like others interviewed for this story, he asked that his name not be used to protect him from prosecution.)

“I carry 24/7 wherever I go,” the Orange County man said. “I believe that law is illegal, not me. History has shown us that when Jews are not being allowed to defend themselves, this can lead to bad outcomes.”

He also added that police officers in Orange County “might assume that we are still carrying and would be looking the other way.”

The Orange County Sheriff’s Office declined a request for comment.

Another Jewish gun owner in Rockland County told the New York Jewish Week that he doesn’t see the state law as valid.

“I don’t think it’s illegal,” the Rockland County man said. “I think New York says that they’ll prosecute me for even carrying the firearm, but we’ll take it up in the courts.”

An appeals court granted an interim stay, meaning the Concealed Carry Improvement Act will remain in effect during the appeals process. This is an important & appropriate step.
My top priority is to protect New Yorkers & we'll keep working with @NewYorkStateAG to defend our laws.

He added that the fear of going to jail is meaningless when compared to the fear of an attack on his synagogue.

“If there is a use of force incident at my synagogue, I’m probably not walking out of there,” the source said. “If I’m willing to put my life down on the line to protect my community, am I willing to go to court and go to jail for a period of time? That’s the price I may have to pay.”

Attacks like the 2018 mass shooting at the Tree of Life synagogue in Pittsburgh and January’s hostage-taking crisis at a synagogue in Colleyville, Texas have prompted many synagogues to pay private firms, train congregants and hire off-duty police officers to bolster security at their synagogues. But the sources who spoke to the New York Jewish Week say they are augmenting these efforts by taking matters into their own hands.

A Brooklyn man told the New York Jewish Week that while bigger synagogues can pay for armed security, at his smaller congregation, he and others must carry a gun to protect their congregants.

“It’s a sensitive topic,” the Brooklyn source said. “No one who is a family man with a stable income living the American life is exactly interested in getting a felony conviction with a mandatory minimum sentence.”

The source added that he has had conversations with New York City Police Department officers who are “sympathetic” to his concerns.

A spokesperson for the office of the Deputy Commissioner, Public Information told the New York Jewish Week that “the NYPD declines to comment on pending litigation.”

“Certain things are left unspoken, but what these police officers implied was that, ‘you are getting yourself into trouble,’” the Brooklyn source said.

Gun laws are much more strict in New York City when compared to other parts of the state. A specific permit is needed to carry guns in certain places, and a permit obtained outside of the city is not valid. It is also illegal to carry a loaded rifle or gun in the city.

We must treat gun violence as the public health crisis that it is, and our work starts at the community level.

The work we’re doing across the state — from getting weapons off the streets to supporting violence interrupters — will help return these streets to our communities. pic.twitter.com/IW0yQwv4Gx

Last Thursday, a federal judge said he would block the state from enforcing parts of the law including the “sensitive areas” section, agreeing to a three-day delay of his order to allow for an emergency appeal.

In a separate case, the Rockland County-based New York State Jewish Gun Club filed a lawsuit saying that the law infringes on its members’ religious freedom by prohibiting weapons in a house of worship.

At least a half-dozen sheriffs in upstate New York said that they have no intention of enforcing the state’s gun regulations, the New York Times reported last Monday.

Jeffrey Lichtman, a criminal defense attorney who has represented clients facing gun charges, told the New York Jewish Week that even if someone has a license to carry, if they are caught in a sensitive place such as a house of worship, they are “facing real jail time.”

“It’s an illegal possession of a gun,” Lichtman said. “I can certainly understand why people in the Jewish community want to carry a gun, but that’s the law.”

Lichtman added that he expects the law to be changed, because it is “untenable.”

All of the sources who spoke to the NYJW attend Orthodox synagogues. Recent polls show Orthodox Jews are less supportive of strict gun control laws than non-Orthodox Jews, in keeping with a right-leaning trend within the community.

"As long as we have that right to bear arms, we are guaranteed it [the Holocaust] will never happen again."

Our fight is just beginning. Join us in the battle to protect our 2A rights by donating to our legal fund – https://t.co/1yj24fXng3 pic.twitter.com/UUimPNrWOr

One newspaper serving the Orthodox community, Hamodia, has been closely following the gun control debate in New York State, with multiple articles on the topic.

Nathan Diament, executive director for the Orthodox Union Advocacy Center, would not comment directly on synagogue-goers flouting the law, but told the New York Jewish Week in a statement that “there is no ‘one size fits all’ approach to synagogue security.”

“The OU’s role is to ensure each shul has the resources and access to security professionals to make the decisions that fit their needs best,” Diament said. “What we are committed to is ensuring that everyone can enjoy their freedom to worship with a freedom from fear.”

The Community Security Service, an organization that has trained thousands of volunteers in synagogue security, declined to comment for this article. In 2020, however, its CEO, Evan Bernstein, told JTA that if a congregation does decide that it wants armed protection, it must approach the issue with care.

Despite such advice and the legal jeopardy, the Orange County source was defiant.

“It’s a concealed weapon and it stays concealed,” he said. “No one has to know. The consensus here is not to go along with this nonsense in Albany. We have an understanding with the officers: Don’t ask, don’t tell.”