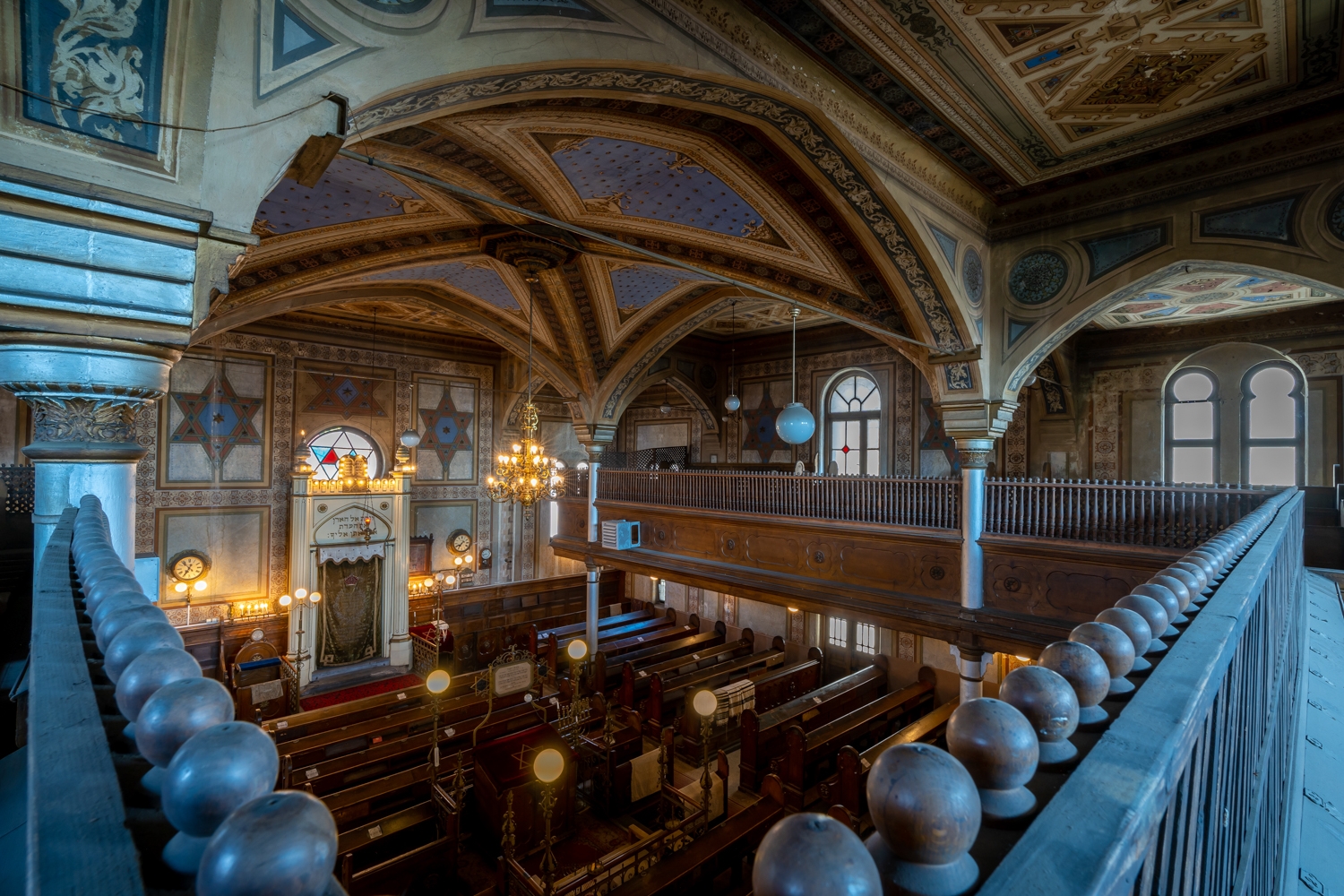 BUCHAREST (JTA) — Stepping inside Romania’s Fabric Synagogue in real life would be a dangerous proposition: Closed since 1986, the ornate 1899 structure in the heart of the city of Timisoara is crumbling inside.

Online is a different story. There, visitors to the Fabric Synagogue can look up at the domed cupola, its stained glass still intact even as holes dot the ceiling, and approach the ark, its closed doors leaving the illusion that a Torah might be contained inside. They can climb to the balcony and look out over the Hebrew letters still affixed to walls, then turn their gaze to the massive graffiti tag that occupies one whole wall of the second floor. They can even check out the synagogue’s dust-laden organ before walking into the Timisoara sunshine and strolling to the municipal parks along the Bega River just a block away.

The virtual tour is one of eight launched recently to give Jews — and non-Jews — the chance to immerse themselves in a world that is no more: that of the non-Orthodox Jewish communities that developed under the Habsburg Empire in the western part of today’s Romania.

Launched by Romanian NGO Pantograf in collaboration with Jewish local communities and activists, the website Povestile Sinagogilor, or Stories of the Synagogues, invites visitors to a virtual tour of eight historic sites in Romania, including Timisoara’s main synagogue, which has been recently renovated. 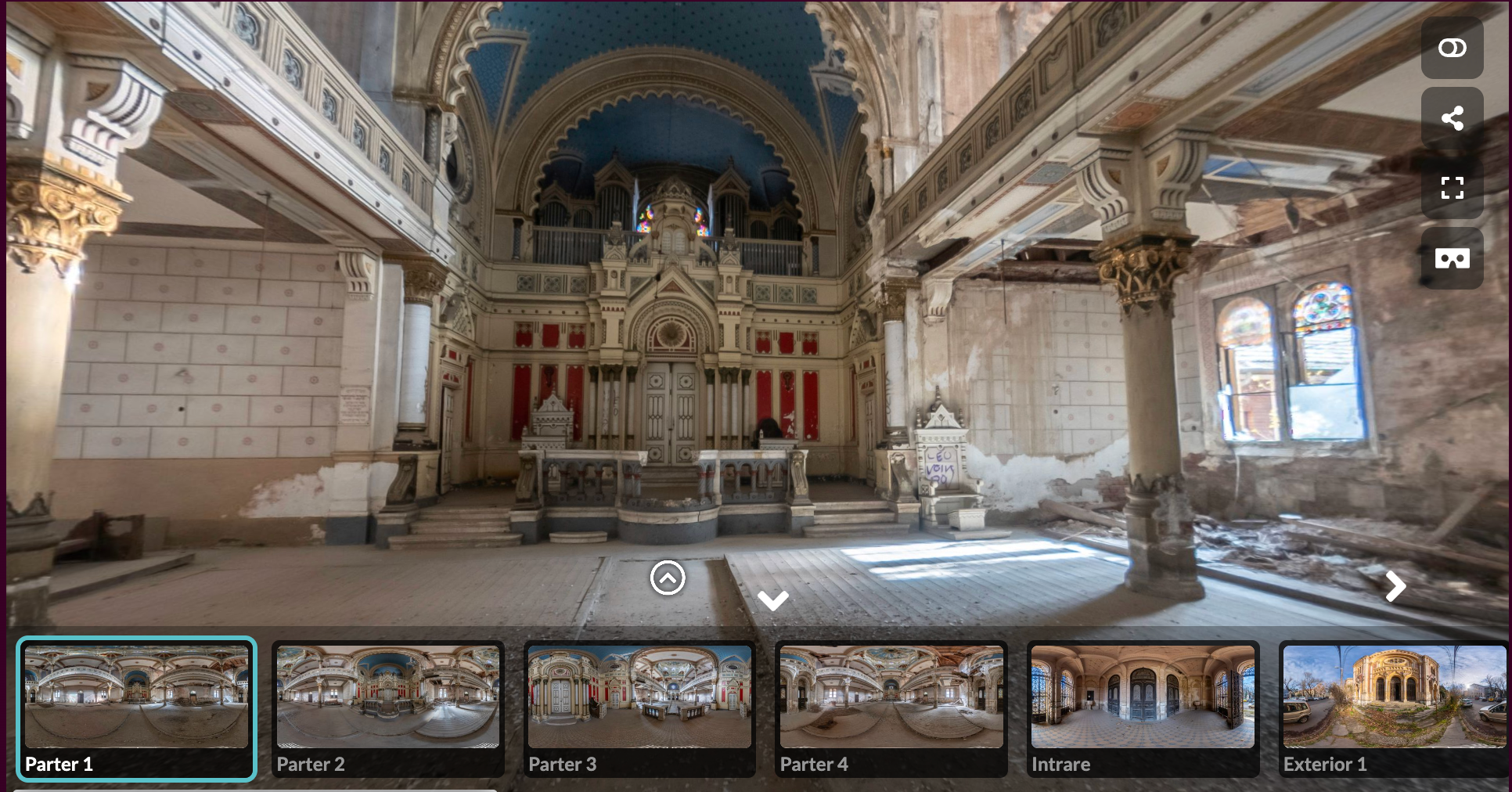 The interior of the Fabric Synagogue of Timisoara, Romania, as seen on a new website opening doors to historical synagogues in Romania’s Banat region. (Screenshot)

The website includes interviews with current Jewish leaders of each community, as well as the English and Romanian transcriptions of oral testimonies collected throughout the decades. In them, Jews who were born in the area recount the prewar era of interethnic coexistence, the years of fascist persecution, and the mass emigration, mostly to Israel, during and after communism.

“It is a unique opportunity for the descendants of these communities to finally visualize what their grandparents left behind,” said Ivan Bloch, a mathematician and IT entrepreneur who is also the president of the Jewish community of Lugoj, in western Romania.

Advances in virtual tourism have opened new frontiers for people interested in sites of Jewish significance. An initiative is underway to recreate online the destroyed Jewish cemeteries of Libya, and this summer, the Israel Museum in Jerusalem opened an exhibit that allows visitors to explore the Great Synagogue of Aleppo through virtual reality. Both of those efforts aim to capture the experience of being Jewish in a place where no Jews now live.

Romania, in contrast, does have a small Jewish population, but it is mostly centered in Bucharest, the capital and largest city.

The virtual tours focus on a different part of Romania, more than 300 miles to the west, called the Banat region. Previously under Ottoman rule, the region was incorporated in 1716 into the Habsburg empire, to which it belonged until its dissolution in 1918, when its territory was split among Romania, Serbia and Hungary. The Jews living in the portion that became Romania were mostly Hungarian-speaking and thrived until antisemitism became Romanian government policy starting in 1934.

Starting then, successive Romanian governments enacted increasingly aggressive legislation depriving Jews of their rights, and between 280,000 and 380,000 Jews living under Romanian rule were murdered during World War II, mostly in the Romanian-controlled territories in today’s Ukraine. (Some 150,000 Jews living in Hungarian-occupied Northern Transylvania were also killed.) Most of those who survived left the country afterwards. 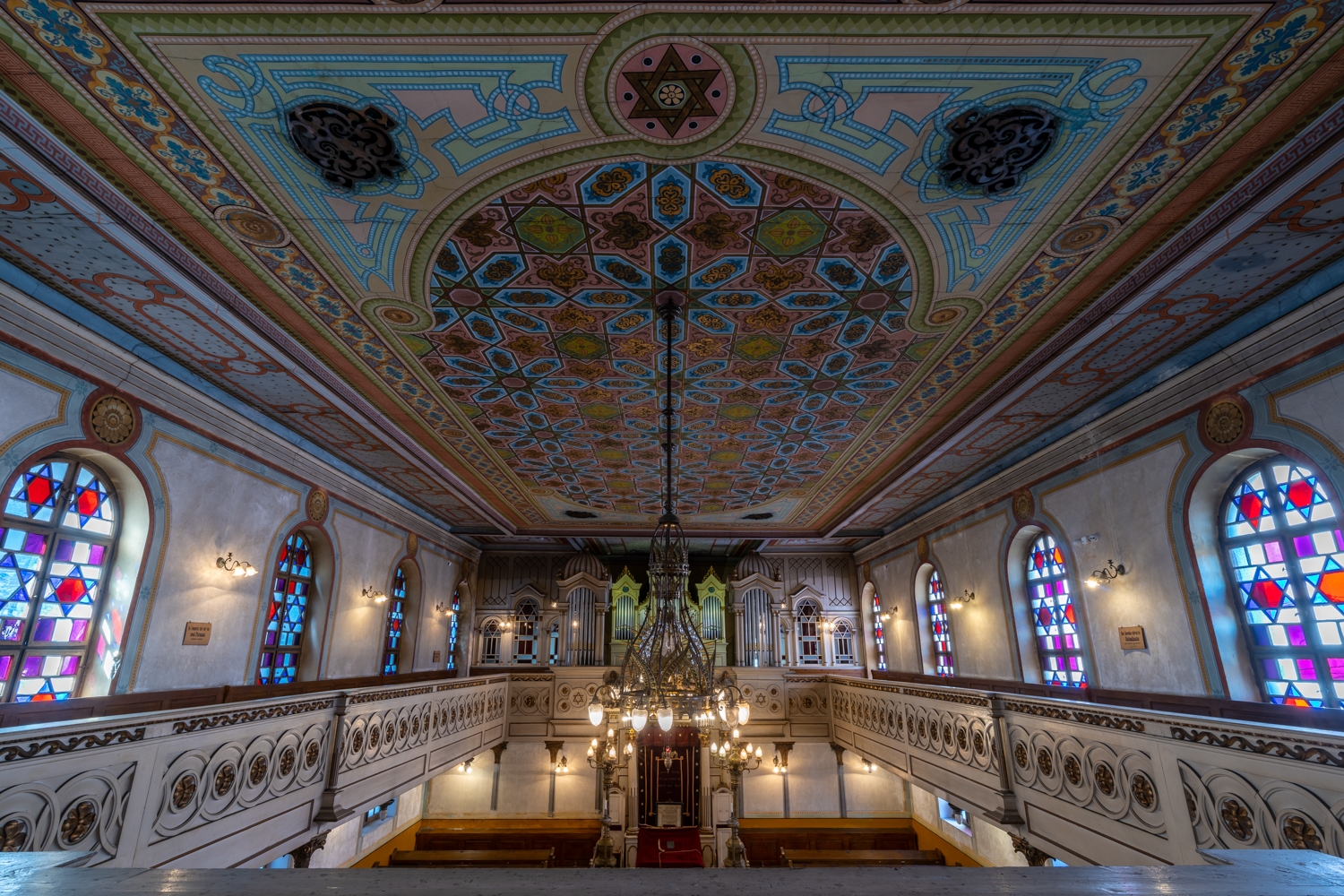 The Lugoj Synagogue, now used by a community of about 150 Jews, as seen on a new website opening doors to historical synagogues in Romania’s Banat region. (Sebastian Puraci/Asociația Pantograf)

In Lugoj, the third-largest city in Romania’s Banat region, Bloch said, the Jewish community once numbered more than 1,500 but is now well below 100. The synagogue there is in good repair, according to the website, but few Jews are present to see it.

“The project virtually rebuilds a connection that was severed in 1950, when half of the community emigrated to Israel together with its rabbi,” Bloch said.

Besides opening a window to history for Jews abroad, the new website aims to educate local audiences.

“It is also directed to the residents of these cities who pass by the synagogues daily and don’t know anything about their role and that of their Jewish communities in the broader Romanian society,” project coordinator Raluca-Elena Doroftei told the Jewish Telegraphic Agency.

Most of the synagogues featured in the website were part of Neolog Judaism, the reformist and liberal religious current that emerged in the 19th century in Hungary and extended across the Austro-Hungarian empire. Music played a central part in the religious services they held.

“Being of the Neolog rite they could sing and had a cantor, a choir and an organ,” said Bloch, who points out that some of the organs of these synagogues “are still functional.”

In 1948, the nascent Romanian communist regime forced Jewish communities to unify in a single structure.

“The communists told Jewish leaders: We want you to have one single community that we can control, it is your problem how you organize it internally,” said Felicia Waldman, a scholar whose studies have included postwar Jewish life in her native Romania. As a result, she said, the Neolog community disappeared “as a separate structure and was forced to integrate in the majority Orthodox community.”  The same happened with the Sephardic community, which became a section of that same Ashkenazi official Jewish congregation.

“Today, we continue to pray and practice religion in an Orthodox format, in accordance with the rabbinate and the Federation of Jewish Communities in Romania,” said Bloch, the Jewish leader in the town of Lugoj, about the current situation.

In some cases, community leaders are hoping that the Stories of the Synagogues project could generate support to refurbish their historic buildings. The Fabric Synagogue, for example, was given to the local theater company with the assurance that the company would pay to repair it; when the company could not raise the funds, the building returned to the Jewish community’s control. Now, the new website says, the community is again “looking for solutions” to pay for a renovation.

“A perfect architectural work, a synagogue built to last hundreds of years,” the website says, “is in danger of becoming a ruin.”