The Nazi history of Adidas, the sportswear giant that took weeks to drop Kanye West over antisemitism 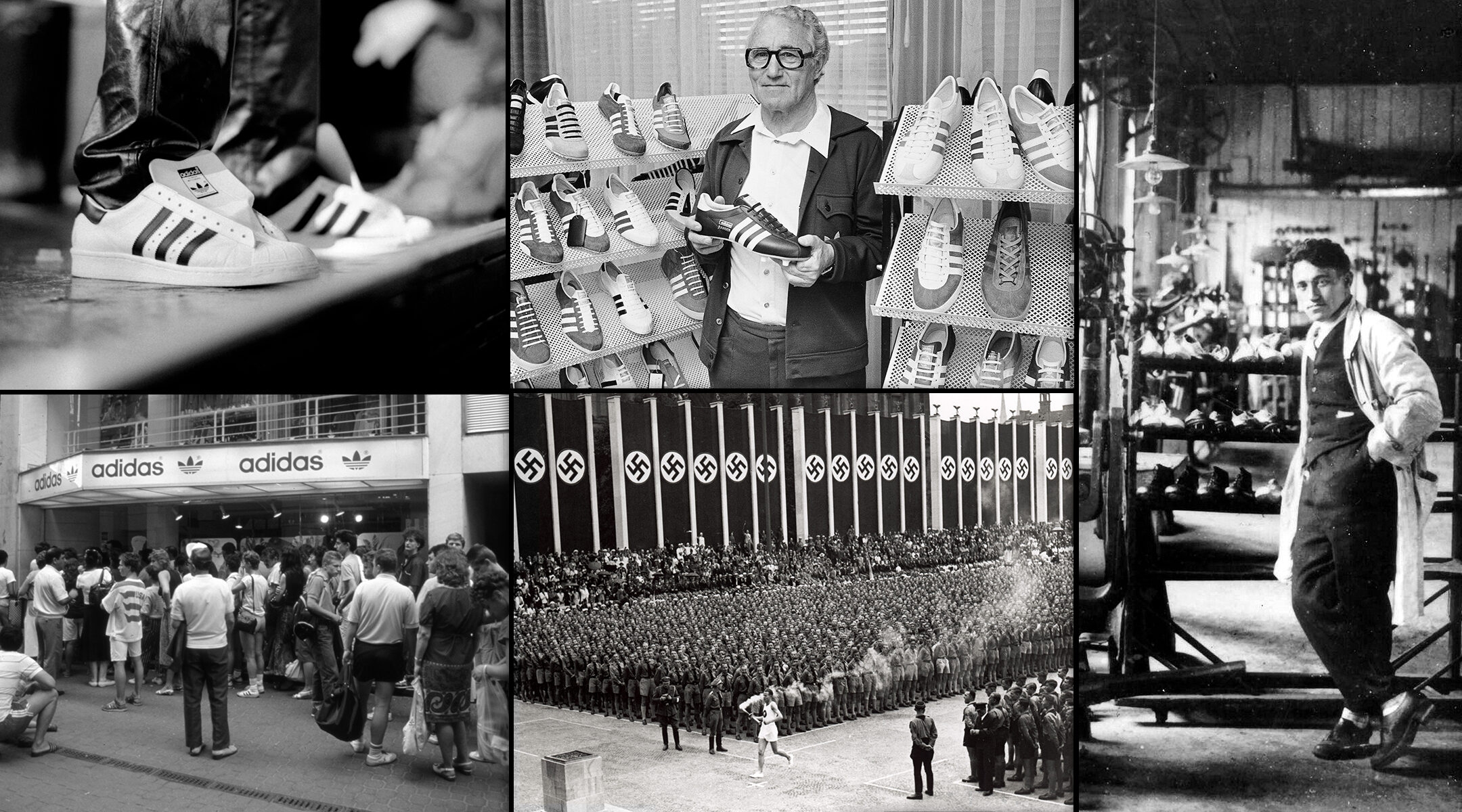 (JTA) — As rap star Kanye West continually refuses to back down from his antisemitic rants, some of the many institutions he has ties with have begun to jump ship. The fashion tastemakers Balenciaga and Vogue have announced they will no longer be working with him. Hollywood talent giant CAA has dropped him, and a planned documentary about him has been scrapped.

But one formidable company remained, until early Tuesday morning, in West’s corner: Adidas.

Despite the German sportswear conglomerate’s announcement earlier this month that it would be placing its partnership with West “under review,” it took six days after West boasted on a podcast that “I can literally say antisemitic s— and they cannot drop me” for Adidas to drop him.

The brand’s radio silence kept up even as neo-Nazi groups began using West’s words to go after Jews, unveiling an antisemitic billboard in Los Angeles that was condemned by the White House Monday.

The Anti-Defamation League mounted a growing public pressure campaign to get the company to cut ties with West, and celebrities including Kat Dennings, David Schwimmer and Busy Phillips have boosted it. Other celebrities, including Reese Witherspoon and West’s ex-wife Kim Kardashian, have used their social platforms to condemn antisemitism without specifically referencing Adidas or West; Jessica Seinfeld, the Jewish cookbook author and wife to comedian Jerry Seinfeld, spurred a viral Instagram movement by encouraging her followers to share a post reading “I support my Jewish friends and the Jewish people.”

Observers are watching Adidas because of its enormously lucrative partnership with West – their shoes and clothes generated an estimated $2 billion last year and brought the brand cultural cache among young consumers. But the company also has a Nazi history that it has rarely addressed publicly. (The company’s CEO, Kasper Rorsted, announced in August that he would be stepping down in 2023.)

Here is an abbreviated version of Adidas’ history with Nazis, Jews and the superstar rapper who now goes by Ye.

Does Adidas really have Nazi origins?

Yes, but its founding pre-dates the Nazis’ rise. The company was founded in 1924 in Weimar-era Germany as the Gebrüder Dassler Schuhfabrik (Dassler Brothers Shoe Factory), or Geda for short, by cobbler brothers Adolf (“Adi”) and Rudolf Dassler.

Based in the Bavarian town of Herzogenaurach, the Dassler brothers quickly made a name for themselves by pioneering some of the earliest spiked shoes – drilled through with nails to help runners on uneven terrain.

On May 1, 1933, with the company’s fortunes on the rise and Hitler having just assumed power in Germany, the Dassler brothers formally joined the Nazi party, according to journalist Barbara Smit’s book “Sneaker Wars,” a history of Adidas.

The Nazis embraced sports as a tool both to boost Germany’s public profile and to train its future armies of young men, so the pioneering shoe company fit nicely into their schema. Under Nazi rule, the Dasslers’ sneaker sales promptly exploded, and they grew the size of their company several times over.

During the infamous 1936 Berlin Olympic games, orchestrated by Hitler in an attempt to demonstrate Aryan athletic supremacy on the world stage, many of the German athletes sported Dassler shoes.

But so did Black American track and field star Jesse Owens, whose very presence at the games was a thumb in the eye of Hitler’s race theories. Even so, Owens was popular with both Germans and Americans, and Adi Dassler was able to convince him to don the company’s spiked shoes during his medal ceremony. The subsequent exposure helped the shoes make inroads among Allied markets after the war, even in spite of their German associations.

How devoted to the Nazis were the Dassler brothers?

Rudolf was a more ardent devotee of Nazi ideology than Adi, according to Smit, but both brothers carried their party membership cards and signed off their letters with “Heil Hitler.”

During the war, the brothers’ shoe factories were converted into munitions factories for the Nazi military. (Other German shoemakers would test their products on forced laborers in concentration camps.) Rudolf was called to join the war effort, but went AWOL as part of his bid to maintain control of the company from his brother, whom he became convinced was scheming against him.

According to Der Spiegel, some American troops were poised to destroy the Herzogenaurach factory, which employed some forced laborers, in April 1945 — before Adi’s wife Käthe approached them and convinced them that the building was only being used to make sneakers. It worked.

The factory was saved, and when the U.S. Air Force took over the Nazis’ Herzogenaurauch air base, American troops who were fans of Jesse Owens bought Dassler shoes and helped spread the word about the company back home.

What happened to Adidas after the war?

Ironically, the end of World War II was only the beginning of the fight between the Dassler brothers, each of whom (along with their wives) tried to wrest the shoe empire away from the other.

When Germany entered its postwar denazification period, Allies forced the town of Herzogenaurach — including, presumably, the Dasslers and their factory employees — to watch documentary footage of the horrors visited upon Jews at Nazi concentration camps. Rudolf was also arrested, suspected of feeding information to the Gestapo, and briefly sent to a German prisoner-of-war camp for his role on the frontlines, but was freed one year later owing to the backlog of cases against POWs.

Meanwhile, Adi was accused of having actively aided and supported the Nazis during the war, but was able to put together a dossier of people — including the town’s mayor — to support his claim that he was far from a party loyalist.

Among Adi’s claims, according to Smit: he had continued to work with Jewish leather traders later than many other Germans would do business with Jews. He also found a mayor from a neighboring town who claimed to be half-Jewish to say that Dassler had sheltered him on his property in the waning days of the war.

The siblings’ relationship suffered a permanent rift in 1949, leading Adi to form his own company as Adidas, while Rudolf went off to start rival sportswear company Puma. Both companies remain headquartered in Herzogenaurach, and the town’s residents remain bitterly divided over brand loyalty to this day (though Adidas, currently the No. 2 global sportswear company behind Nike, seems to have come out ahead).

What kind of relationship does Adidas have with Jews today?

The company calls Adolf Dassler its “founding father,” but it remains tight-lipped about its founders’ Nazi associations. On its website, Adidas’ own official history defines its pre-1949 years simply as “only the start of our story,” without any references to Nazis or Owens.

Jewish athletes have worked with the company in the decades since the war. In 1972, at Adidas’ suggestion, American Jewish Olympic swimmer Mark Spitz carried a pair of their shoes to the podium during his medal ceremony. And last year, Adidas Israel built a campaign around a haredi Orthodox marathon runner.

Adidas has also occasionally waded into geopolitical waters with the Israeli-Palestinian conflict. In 2012 the company was boycotted by Arab states for sponsoring the Jerusalem Marathon, which ran through disputed territory. And in 2018, the company ended its sponsorship of the Israel Football Association, a development celebrated as a victory by the Boycott, Divestment, Sanctions movement because the association had included teams representing Israeli settlements. (Puma took over the sponsorship.)

Adidas did not respond to a JTA request for comment for this story.

Adidas’ partnership with West is nearly a decade old, and extremely lucrative. His Yeezy line of sneakers and other products brought the company an estimated $2 billion in revenue last year, accounting for around 10% of its total revenue, according to The Washington Post. (West previously had an arrangement with Nike but was unhappy with it.)

Despite the “corporate social responsibility” movement that many companies have embraced in the aftermath of 2020’s racial justice protests, the idea of corporations like Adidas having a sense of social responsibility remains elusive, according to Josh Hunt, author of “University of Nike: How Corporate Cash Bought American Higher Education.”

“Sneaker companies, like all corporations, are amoral,” Hunt told JTA. “They will do what is unseemly until it becomes unprofitable, whether that means exploiting forced labor in Xinjiang or collaborating with Nazis.”

But Jews love sneakers, too. One of the most prominent Jewish sneakerheads is Rabbi Yoël Mendel, a Paris-based member of the Chabad-Lubavitch movement who goes by “Rabbi Sneakers” online.

On his Instagram page, Mendel uses sneakers as a tool for teaching Torah and shows off a variety of shoes and sports apparel-themed kippahs, including plenty of Adidas gear. (He praised one pair of leather-free Adidas shoes because he could wear them on Yom Kippur.)

“What can I say,” Mendel told the Jewish Telegraphic Agency. “They make great, comfortable shoes.”