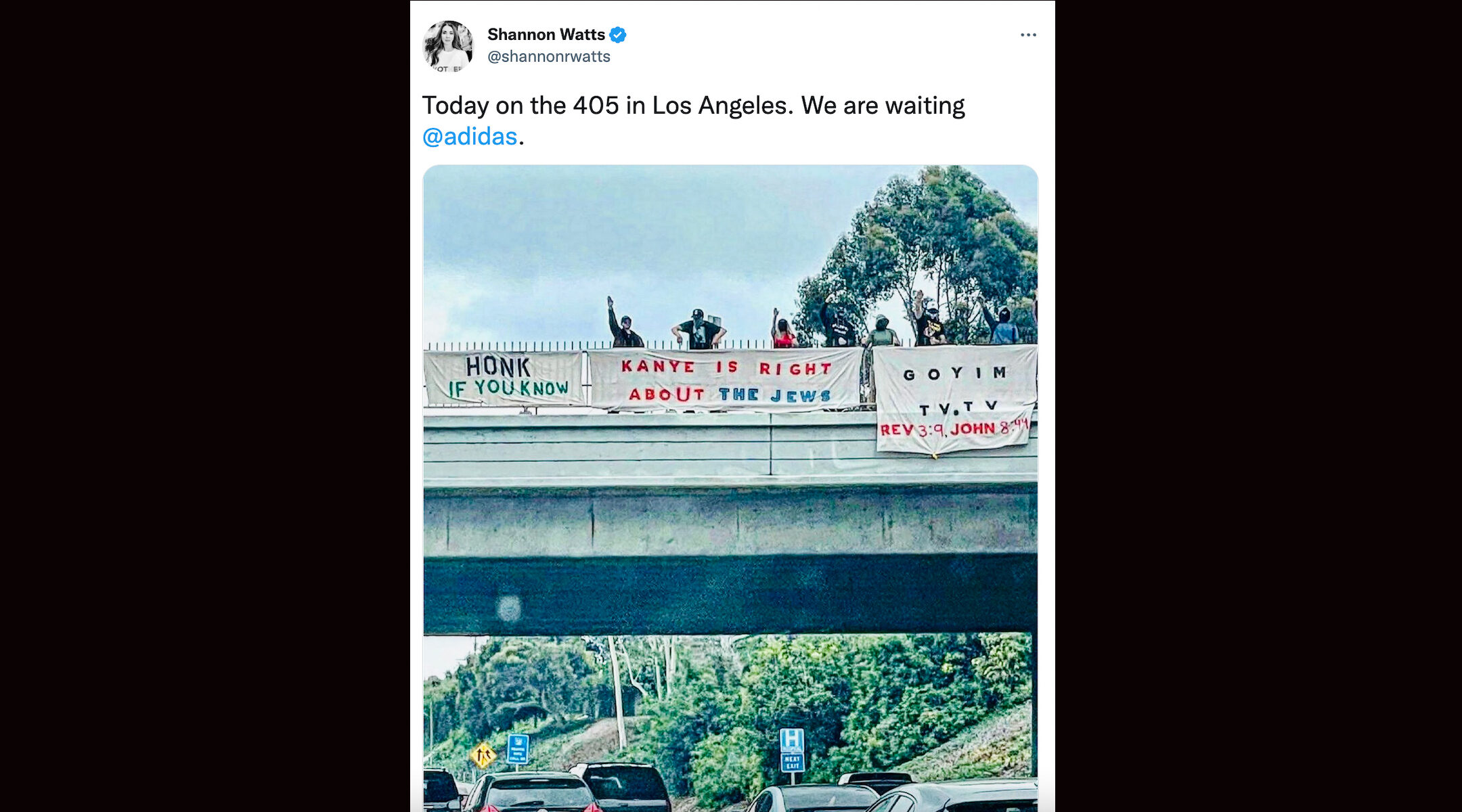 (JTA) — Drivers heading south on a major freeway in Los Angeles Saturday could view a Kanye West-related provocation by a vocal group of antisemites.

“Kanye is right about the Jews,” read a banner hung by members of the Goyim Defense League, a white supremacist group, over the 405 freeway. It was a comment on the rapper and conservative figure’s string of antisemitic comments on social media and in interviews in recent weeks, beginning with a vow to “go death con 3 on Jewish people.”

The banner appeared alongside another crediting Goyim TV, one of several calling cards of the Goyim Defense League, alongside distributing antisemitic literature in local communities. The group has hung prominent antisemitic banners before, including in Los Angeles (“Jews want a race war,” 2020) and Austin, Texas (“Vax the Jews,” 2021). Shortly after the Austin demonstration, a teenager was arrested after allegedly setting fire to a synagogue there.

Members of the Goyim Defense League, including its founder Jon Minadeo, stood on an overpass while the banners hung, according to pictures taken by drivers and shared widely on social media this weekend. Several of them appeared to be giving Nazi salutes.

The group is reportedly pleased by outrage over its stunts because it calls attention to them. And indeed, the latest display appears to have drawn more widespread attention than some of the group’s other stunts in large part because the frenzy over West’s recent comments has caused more than antisemitism watchdogs to decry it.

“Really great to see slurs about Jews shared across social media because a few parasites went on a bridge over the 405 and spread propaganda,” tweeted Elad Nehorai, a Jewish activist who lives in Los Angeles, on Sunday. “Congrats to those who’ve shared it: you’ve done their work for them and spread it to millions.”

Many of the people sharing the photos — including the gun control activist Shannon Watts, actress Busy Phillips and artist Zoe Buckman — included criticism of Adidas, the athletic company that maintains a lucrative partnership with West.

Adidas, whose founders were Nazis, has said it has placed its contract with West “under review” but has not severed its ties, despite calls to do so by the Anti-Defamation League and others. The West collaboration reportedly brings in $2 billion a year, 10% of the company’s revenue.

“I can literally say antisemitic s— and they cannot drop me,” West bragged last week.

Oren Segal, the head of the ADL’s Center on Extremism, noted on Twitter that the Goyim Defense League frequently livestreams its activity and solicits donations during those broadcasts, as it did on Saturday. He said the group’s ability to springboard off of West’s comments represented a potent danger.

“While Ye (formerly Kanye West) has been no stranger to controversy in recent years, his most recent rhetoric has helped advance the spread of longstanding hateful and false narratives shared by extremist groups,” Segal tweeted.