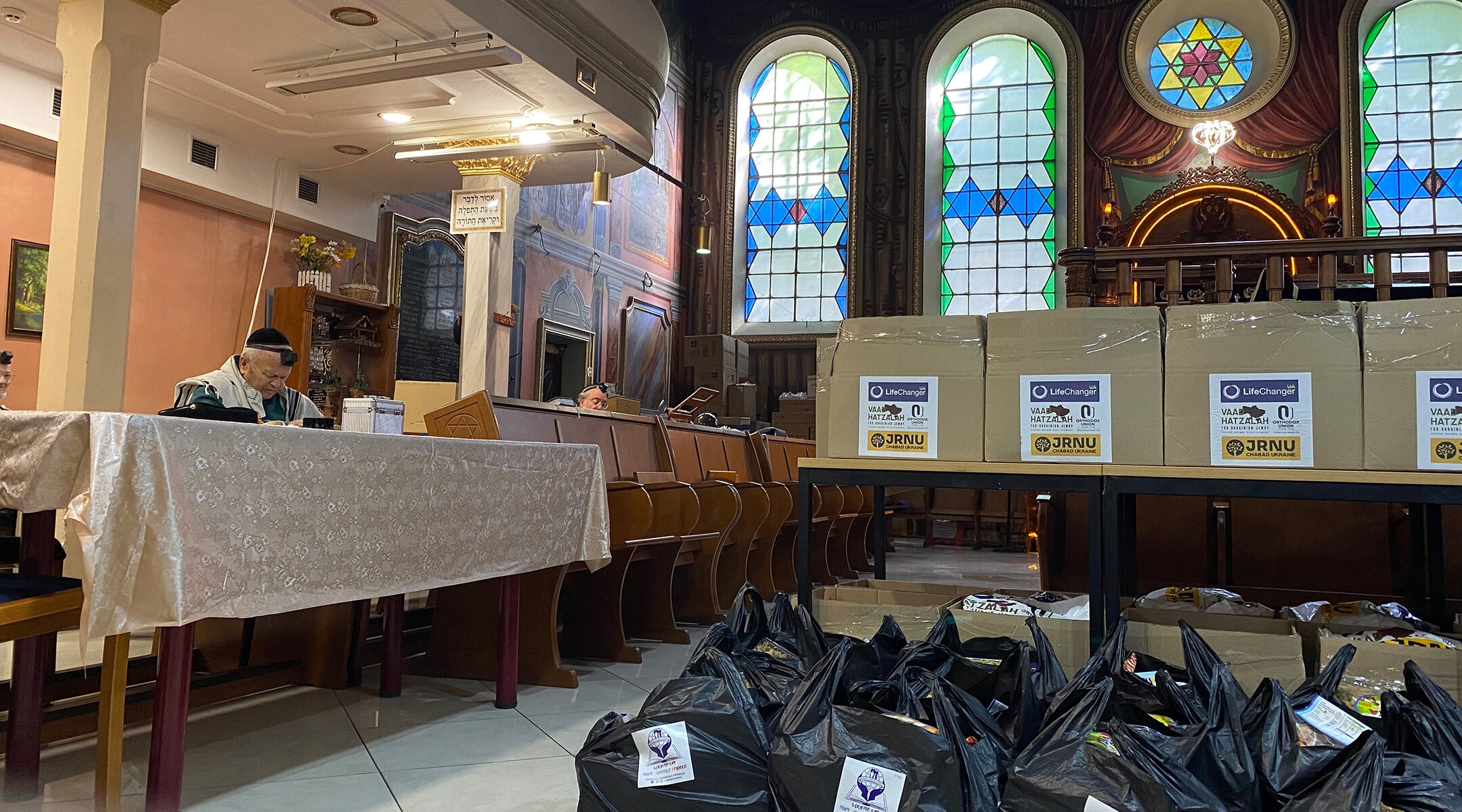 Food parcels, ready to be delivered to Jews in Lviv, are piled up waiting until the end of morning prayers before they can be ferried out to those waiting outside. (Jacob Judah)
Advertisement

LVIV and IVANO-FRANKIVSK, Ukraine (JTA) — An elderly couple waited patiently on a steel bench for a food parcel. A teenage boy negotiated furiously with a gruff flat-capped caretaker about how much support his family needed. A little girl timidly held her mother’s hand as she waited in line for a week’s worth of supplies.

Such was the scene on a recent morning outside the main synagogue in Lviv, the western Ukraine city that has become a hub for refugees from across the war-torn country. By the time the families received relief parcels being distributed there, a dozen more had passed through the metal gates leading to the synagogue courtyard.

“We have people from all over,” said Sara Bald, the rebbetzin of the synagogue, known as the Beis Aharon V’Yisrael. She has been overseeing the broad effort to meet mostly Jewish refugees’ needs, which includes distributing food and other goods and finding new arrivals apartments and hotels to stay in, and said the number of Jews the synagogue was helping had grown from 600 before the war to about 2,000 today.

“There are some people that are just passing by and that are temporarily living here, but then there are others that have been here more than half a year already,” Bald said. “They hope to go back, but for the moment, they are here to stay.”

Bald was pointing to a fact of life for Ukraine that could have long-lasting implications for its diminished Jewish community. While many Jews have left Ukraine altogether for Europe or Israel, others have opted to stay and wait out the war in the relative safety of western Ukraine, where small Jewish communities have mobilized to support them. 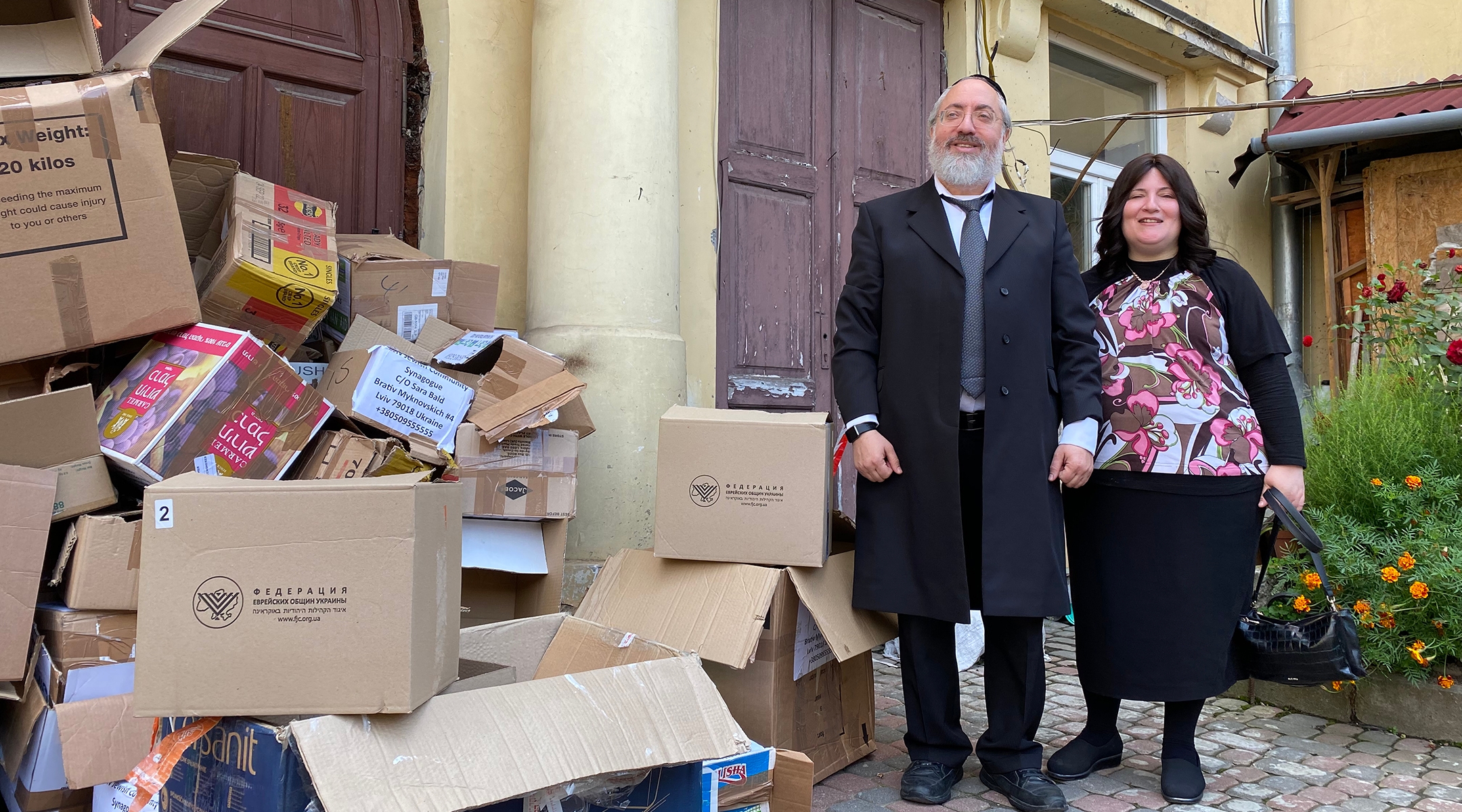 Rabbi Mordechai Bald and his wife, Sara, have distributed thousands of boxes of supplies to Jewish refugees from around Ukraine in Lviv – boxes of empty products that they have given out lie around outside the synagogue. (Jacob Judah)

Now, as the fighting drags on, with no end in sight, it appears increasingly likely that many displaced Jews, especially those from cities in southern and eastern Ukraine that are under Russian occupation or near the frontlines, will not go home.

If the refugees put down roots, western Ukraine could see a boom in its Jewish population for the first time in decades, since the mass exodus to Israel in the 1970s when the Soviet Union first permitted Jewish emigration.

“Time will tell, but there is a good possibility that this community will end up being larger,” Bald said.

Already, Jewish leaders in western Ukraine communities say they are seeing a change — not just in the number of Jews in the area, but in their connection to the Jewish community.

“With the war and so many people escaping, that process reminded them that they had Jewish roots,” said Maksim Mursov, 42, who has been helping to distribute aid to displaced Jews in his city of Ivano-Frankivsk, the third-largest in western Ukraine. “When they arrived in a strange city and when they really needed help, they felt and found those roots.”

“The war woke me up,” says Yuri Sodovenko, a 69-year-old who only recently started coming to synagogue for services in Lviv. “The war put everyone under a lot of pressure. There are lots of us who have started to become more in touch with the community now.”

Sodovenko, who had come for supplies before returning to a Judaism he had left behind, describes his experience as cathartic.

“It was like clouds opening up,” he said. “This is a refuge, a calm place. When I leave the walls of the synagogue, I am back in a world that is going crazy.”

In Ivano-Frankivsk, Moyshe Kolesnik, the city’s elderly homegrown rabbi, said it was clear that the number of Jews in the city had swelled.

“There were maybe 150 Jews in Ivano-Frankivsk before the war,” he said. “We have newcomers now who have come from the south and the east.”

Kolesnik’s community is currently distributing only about 300 food packages to displaced Jews who have come to Ivano-Frankivsk. But Mursov said he suspects that the total number of Jews in the city may have skyrocketed to over 1,000, with more on the way.

“There are many people who come for packages, and we talk to them,” Mursov said. “They say that there are many families or people that they have left behind to watch their houses, and that they are planning to come when the weather gets cold — or if the situation worsens.”

That appears to be an inevitability. In the days after Mursov spoke, Russia opened a new offensive against Ukraine, shelling multiple cities, including Lviv. Still, western Ukraine remains relatively safe. 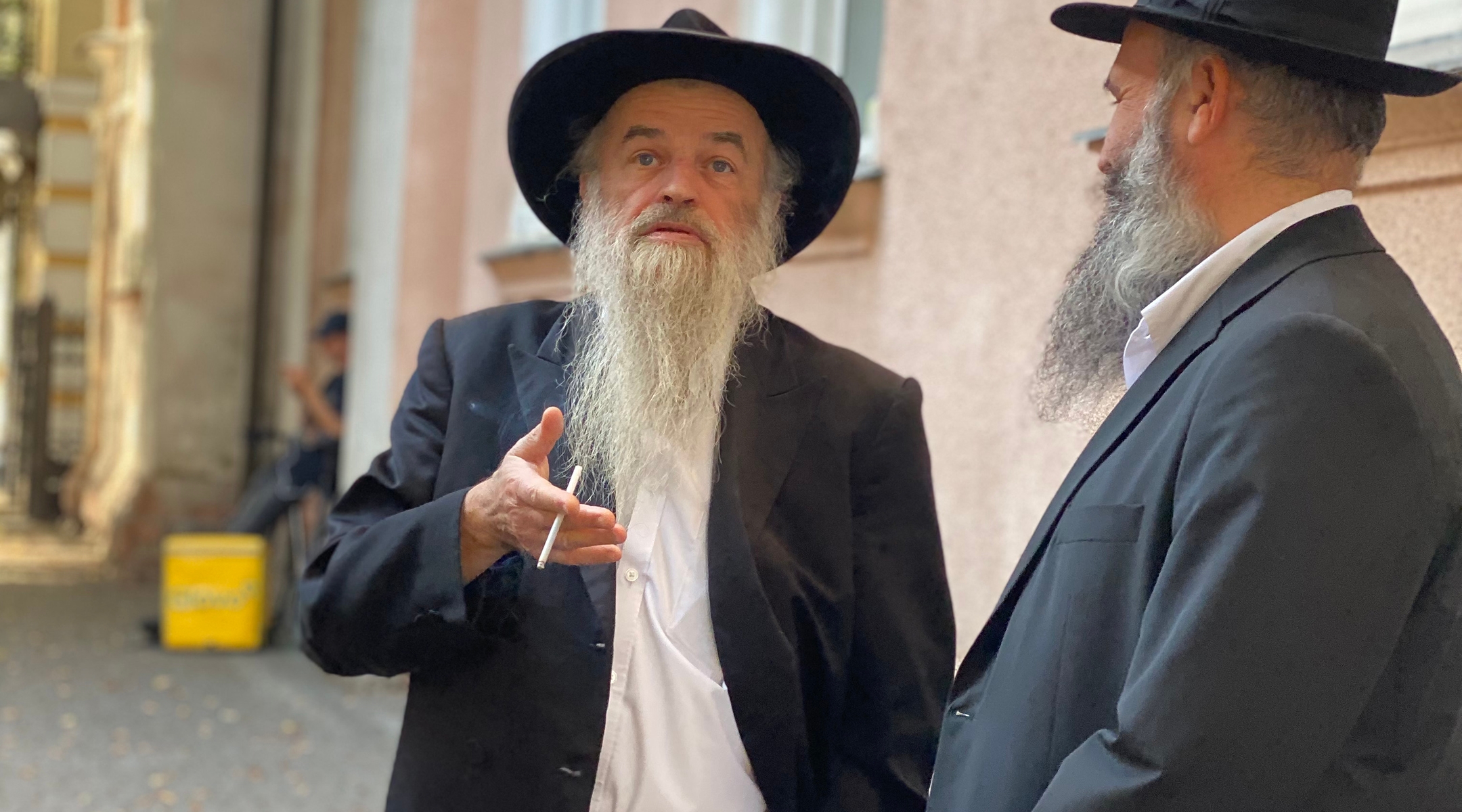 Rabbi Moyshe Kolesnik, the homegrown rabbi of Ivano-Frankivsk, smokes a cigarette outside his synagogue with a visiting rabbi from elsewhere in Ukraine. Since the Russian invasion, towns like Lviv and Ivano-Frankivsk have become crossroads for Ukrainian Jews entering and leaving the country. (Jacob Judah)

An expanded Jewish community in Lviv would help rebuild a critical mass around which community infrastructure could be focused — something that would help root Lviv once again as a western hub for Ukrainian Jews. Any burgeoning Jewish life would also help support smaller Jewish communities in towns around Western Ukraine, which have felt isolated relative to the bigger Jewish centers in Ukraine.

Illona, who came to Lviv from Mykolaiv, a city in southern Ukraine near the frontlines, is representative of the Jews who could put down roots in a new community.

Unless the Russians are beaten back, and perhaps even if they are, she will not be going home. “You can’t live there at the moment,” Illona said. “There is nothing left there. There are no doctors. It is being bombarded all the time.”

Smaller cities may be seeing only a temporary bump. Mursov said he believes many of the Jews that are currently in Ivano-Frankivsk will eventually relocate to larger cities, including Lviv, or will leave Ukraine. Kolesnik is unsure.

“We might gain a few,” he said. “But let us be honest: it is not going to rebuild the Jewish community that was once here.”

Indeed, while the numbers of Jews arriving are large by contemporary Jewish standards in Ukraine, they are minuscule compared to the once huge populations that lived here before World War II. In 1931, Jews made up just under 10% of the population in the region, which was at the time part of Poland.

In Ivano-Frankivsk, there were some 40,000 Jews when the Germans took over the occupation of the city from the Hungarians in July 1941. It is believed that only 100 Jews survived in the city itself, and fewer than 1,500 of those who had fled deeper into the Soviet Union. 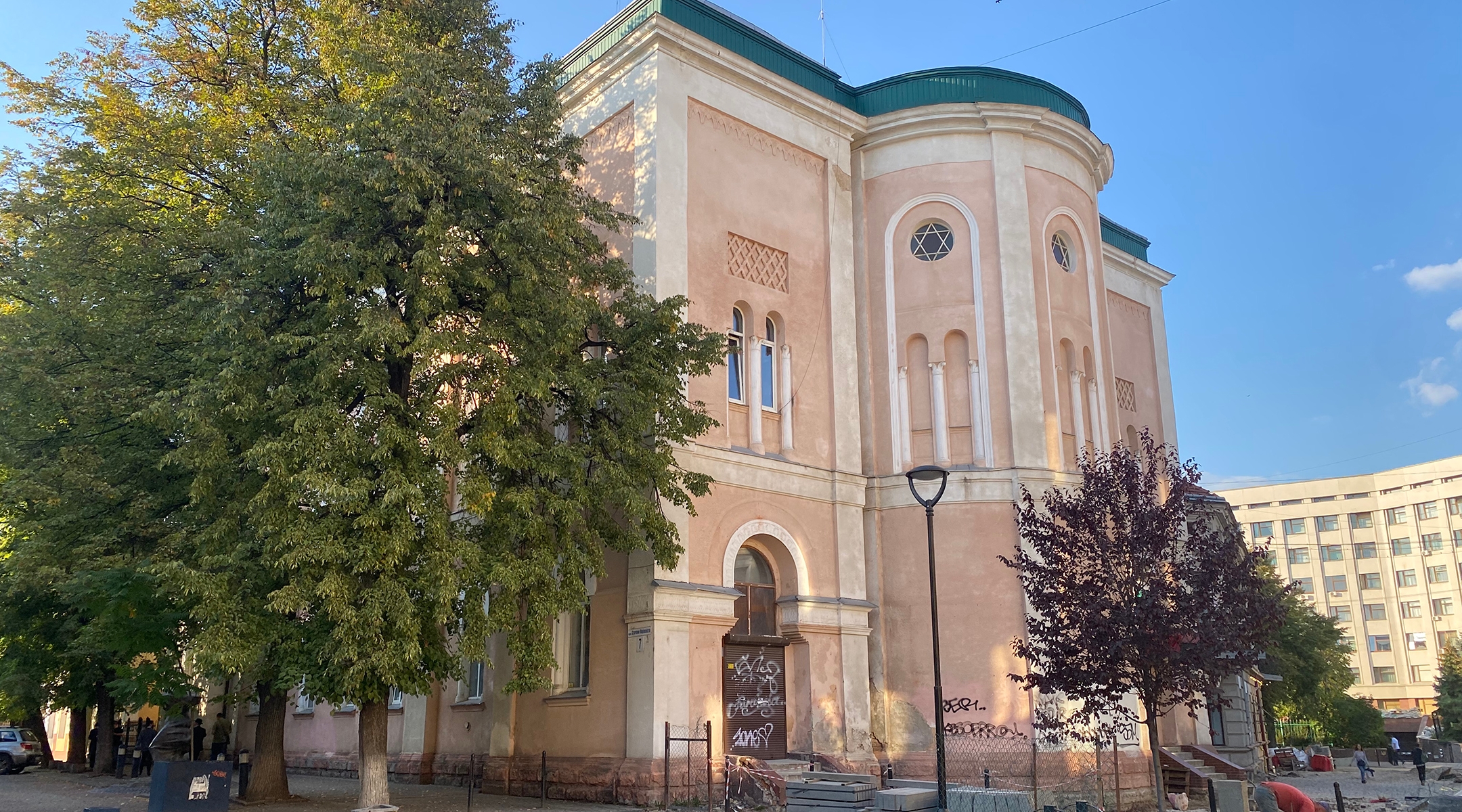 While Ukrainian Jews pass through Ivano-Frankivsk on their way to the European Union, some have stayed behind and have turned to the small community based out of the Tempel Synagogue for support. (Jacob Judah)

When Kolesnik was born in 1957, there were some 3,000 Jews. But many of them left when emigration to Israel was finally permitted.

Kolesnik has tried to rebuild this community that vanished. In his office, he picks books published during the Austro-Hungarian era and maps of the city from interwar Poland off the shelf. He points to photos of rabbis that once taught at yeshivas and synagogues that dotted the city. “There were 56 synagogues here,” he said. “Can you imagine that?”

When the Soviet Union collapsed, people from across the Carpathians searched out Kolesnik out to give him treasures saved or stored for Jewish neighbours murdered during the Holocaust. “I had three big trucks that were filled with old books that we recovered, and I had sent to them to Budapest to get the books out.”

The Torah scroll that he reads from every week was saved from the ghetto during the German occupation.

“It was passed through the fence of the ghetto by a Jew to a local,” he says. “He kept it for 50 years and when I became the rabbi here in 1993, he came to the synagogue, and he gave me this Torah.”

Like contemporary refugees, he said, many of Jews who put down roots in Ukrainian cities in the postwar period were looking for Jewish connection, even though it was hard to sustain under communism.

“Many people had to flee and come to cities far away from home, and that process reminded them about their Jewishness,” Kolesnik said. “They were in a strange place, and they needed help, so they looked around and found those Jewish roots.”

There had been plans to honor the memories of the Jews in Ivano-Frankivsk by redeveloping abandoned synagogue into a Holocaust museum. The war has delayed everything.

“We had all the paperwork ready to go to take ownership of it,” says Andrii Vymarchyk, the Jewish structural engineer who was supposed to work on the project. “The war broke out and it has delayed everything.” He expected the project to cost over 1 million Euros. “We were planning to restore the building to its original state, but now, we’ll have to wait.”

Memories of antisemitism in western Ukraine are complicated. Western Ukraine has been the kernel for modern Ukrainian nationalism, something that for years many Jews in Ukraine felt uneasy about. The Russian invasion appears to have eased their concerns.

From Ivano-Frankivsk, where most Jews are over 60, a dozen community members are fighting on the frontlines and four have been taken as prisoners of war, local Jews say. Those who remain, or who have flooded in, are engaging with Judaism in new ways.