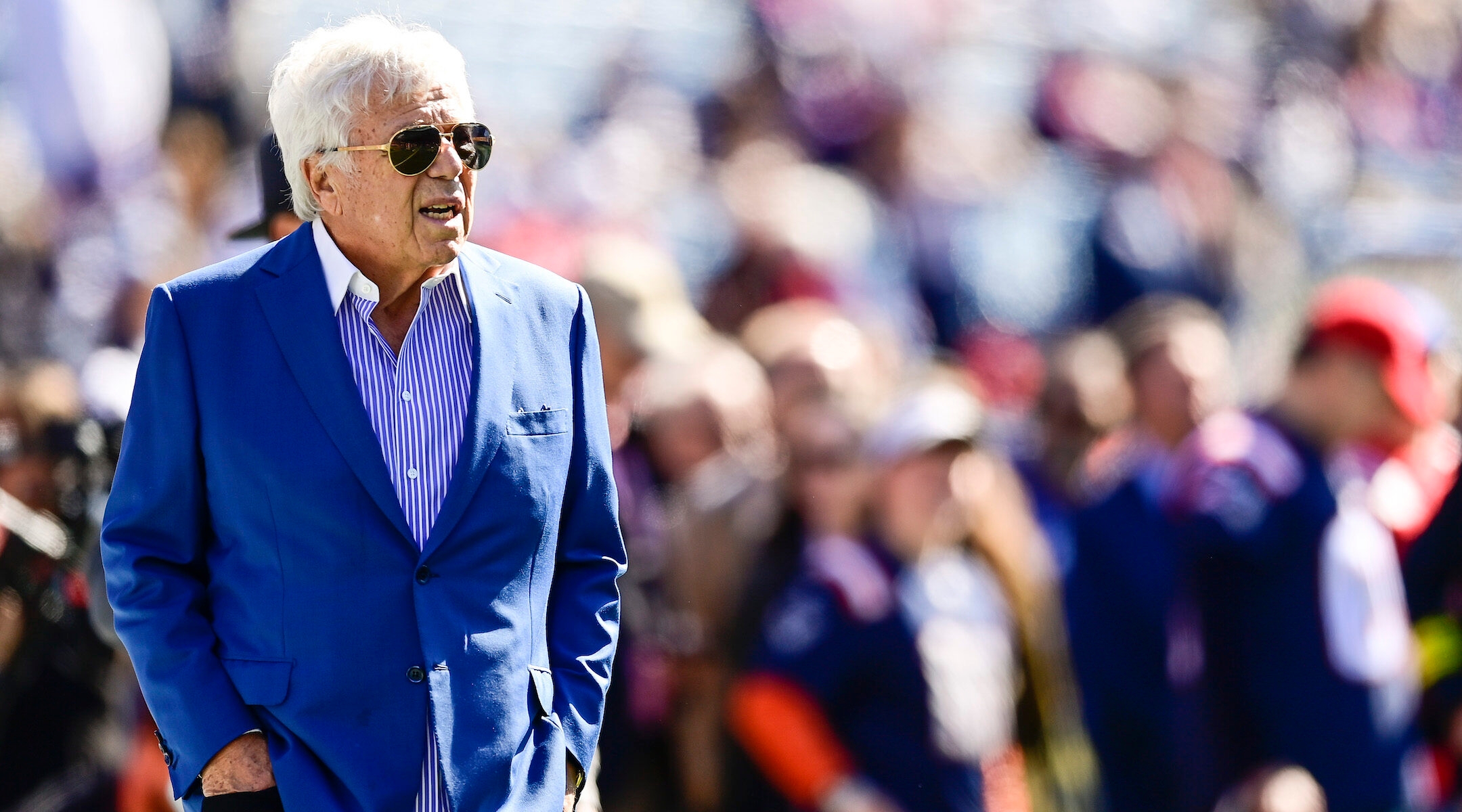 (JTA) — Robert Kraft, the New England Patriots owner who donates heavily to Jewish causes, funded an advertisement that ran during Sunday’s NFL matchup between the Patriots and the New York Jets urging NFL fans to “stand up against Jewish hate.”

The ad aired during a weekend in which NBA star Kyrie Irving shared a link to an antisemitic movie online and the message “Kanye is right about the jews” was projected at TIAA Bank Field in Jacksonville, Florida, during a college football game between the University of Florida and the University of Georgia.

“There are less than 8 million Jewish people in this country. Fewer than are watching this game,” read Kraft’s 30-second ad, which featured simple white text on a black background, set to ambient music. “They need you to add your voice.” It was produced jointly by the Foundation to Combat Antisemitism and Patriots owner Robert Kraft’s foundation.

“We must do more to make people aware that antisemitism is a growing threat against Jews on social media and in communities across the country,” Kraft said in a statement. “I have committed tremendous resources toward this effort and am vowing to do more. I encourage others to join in these efforts. My hope is this commercial will continue to enhance the national conversation about the need to speak out against hatred of all types, and particularly to stand up to Jewish hate.”

Kraft, whose estimated net worth is $10.6 billion, has donated millions of dollars to a variety of Jewish causes over the years — including Israel and numerous Jewish institutions and programs in Boston, where his late wife Myra was a longtime leader at the Jewish federation.

The ad follows the recent controversy surrounding rapper Kanye West, whose ongoing antisemitic tirades led to the termination of his highly lucrative contract with Adidas.

The Jacksonville stunt was just one of a handful of antisemitic incidents in the city this weekend, where the same message was displayed on another building and banners reading “End Jewish Supremacy in America” and “Honk if you know it’s the Jews” were displayed on Interstate 10. It is unclear how the Kanye statement was projected across the exterior of the Jacksonville stadium.

“We strongly condemn the antisemitic hate speech projected outside TIAA Bank Field in Jacksonville after the Florida-Georgia football game Saturday night and the other antisemitic messages that have appeared in Jacksonville,” the universities said. “The University of Florida and the University of Georgia together denounce these and all acts of antisemitism and other forms of hatred and intolerance. We are proud to be home to strong and thriving Jewish communities at UGA and UF and we stand together against hate.”