At an Israeli polling station, Arab voters struggle to be heard The young Abu Shehadeh hands slips to two elderly women who have come to vote. “The people here don’t need convincing to vote for Balad, they just need help,” he said. “Some of the older generation don’t know how to read Hebrew so I’m just directing them.”

A sleek black sedan decked out in orange Balad flags arrives and Jihad Saka exits the driver’s seat. According to Saka, who is married to Abu Shehadeh’s cousin, more young Arabs than ever are going out to vote this time around.

“I just got 60 young guys at a coffee shop smoking hookah to go vote with a single WhatsApp message,” he said. “I didn’t even need to convince them.”

“They understand this is about their future. They know what’s going on because they have TikTok, they see everything — all the racism of [Itamar] Ben-Gvir and [Bezalel] Smotrich,” he said, referring to the firebrand members of the far-right list looking to earn prominent places in parliament by joining forces with Benjamin Netanyahu. “They’re not like the older people, who are locked in their ways, they know they can do something about it.”

Balad is at the far-left of Israel’s political spectrum, and the most anti-Zionist of the three Arab parties. It split from the Joint List of Arab parties in September, leaving the two other parties, Hadash and Ta’al, to run on a joint ticket.

According to all published polls, Balad is unlikely to meet the electoral threshold of 3.25%. But this fact does little to deter Abu Shehadah and his friends.

“In every single recent election, the polls show Balad not making it. But the day after the election, we always find that to be untrue,” said Mahmoud Kaboub, another one of Abu Shehadah’s friends. 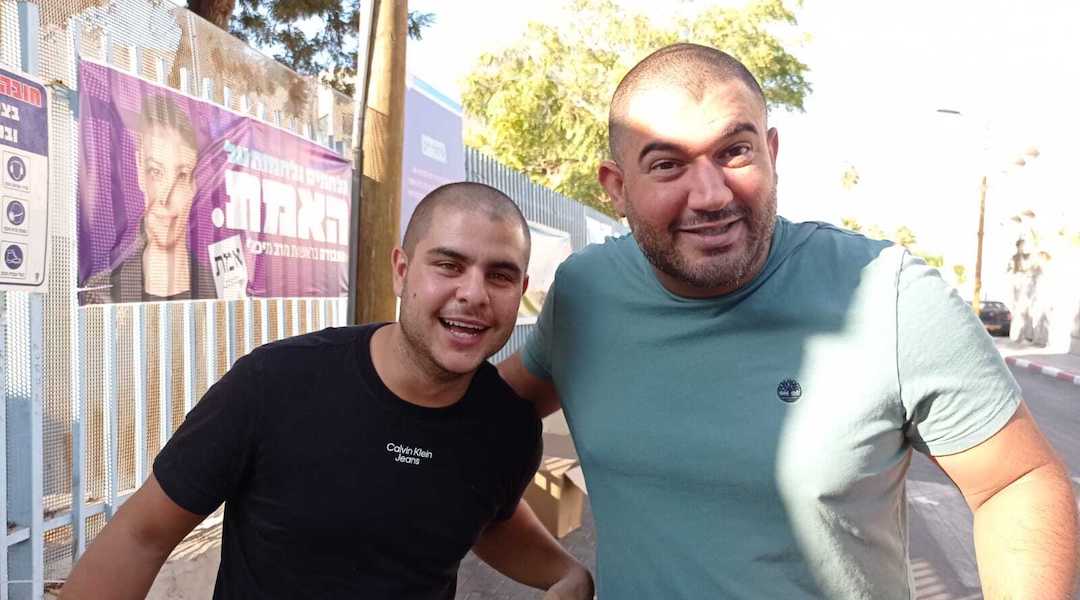 Jihad Saka, left, and Mahmoud Kabul pose outside their polling station in Jaffa. Both support Balad, the far-left Arab party struggling to get into the Knesset, Nov. 1, 2022. (Deborah Danan)

If the polls turn out to be correct, those votes for Balad could play to the benefit of the right-wing bloc led by Netanyahu, which is predicted to fall just shy of the 61-seat majority needed to run a government.

But it’s hard to gauge if Saka and Kaboub are right. Reports about Arab voter turnout over the course of the day have differed wildly. According to the Hebrew University’s aChord center, at 2 p.m. local time, the Arab vote stood at a meager 17%, trailing far behind the overall vote of 38.9%. But the Central Election Committee put the Arab vote at 39% at the same hour.

Just a few weeks ago, it wasn’t clear that Balad would be running in the elections, after the CEC voted to bar the Arab nationalist party from qualifying, ostensibly over its platform rejecting Israel’s definition as a Jewish and democratic state.

“They say Sami is a terror supporter because of his views. Sami always says, I’m working for a democratic state for all its citizens, doesn’t matter if you’re an Arab, Jew, homosexual,” Saka said.

RELATED: As Israelis head to the polls, American Jewish leaders quietly fret about how they’ll respond to the results

According to Kaboub, this election round is different from the four that preceded it over the past three-plus years because far-right leaders are riding on tickets that pose an existential threat to the Arab population. Ben-Gvir has called for deporting Arabs who aren’t loyal to Israel, annexing the West Bank and exercising full Israeli sovereignty over the Temple Mount, where the Al-Aqsa mosque is located.

“They’re betting on our very existence. We feel threatened. Ben-Gvir is hitting all the right notes — he’s perceived as a patriot. And the young people, including the soldiers, are going for it — finally there’s an alternative to Bibi,” Kaboub said.

According to Rozan, who asked that her last name not be printed, the aim is not to make the governing coalition but just to make it into the Knesset, or parliament. She said that Mansour Abbas and his Ra’am party’s move to join the Knesset in the previous coalition led by Naftali Bennett and Yair Lapid — the first time an Arab party had joined a governing majority — “didn’t help the Arabs.” Ra’am is projected to again receive around four seats, which could be crucial pieces of an anti-Netanyahu bloc.

“The first thing we need to work on are our [community’s] basic needs, like education and infrastructure,” said Rozan, who voted for Hadash-Ta’al. “If those things don’t exist, people aren’t even free enough in their minds to be able to vote properly.”

RELATED: The rise and rise of Itamar Ben-Gvir, the far-right politician holding the key to Israel’s next coalition

Knesset member Aida Touma-Sliman of Hadash-Ta’al made a last-ditch appeal to Jewish voters in the late afternoon, warning on Twitter that “for the first time in 74 years, there was an acute threat that the party with the clearest voice against the occupation” would disappear from parliament.

Galina Vaks, who was born in Ukraine, is one of a growing trend of Israelis who have chosen to cast their ballot on behalf of a Palestinian without voting rights. Vaks usually votes for the left-wing Meretz party, but she said the party sold itself and its values out when it joined Bennett-Lapid coalition, which had right-wing partners, in 2021.

Osama Eliwat, from Jericho in the West Bank, said he was “super touched” when a close Israeli friend reached out to ask him who to vote for on his behalf. “Thank you for restoring the hope to my heart again. After I almost lost it,” Eliwat wrote on Facebook.