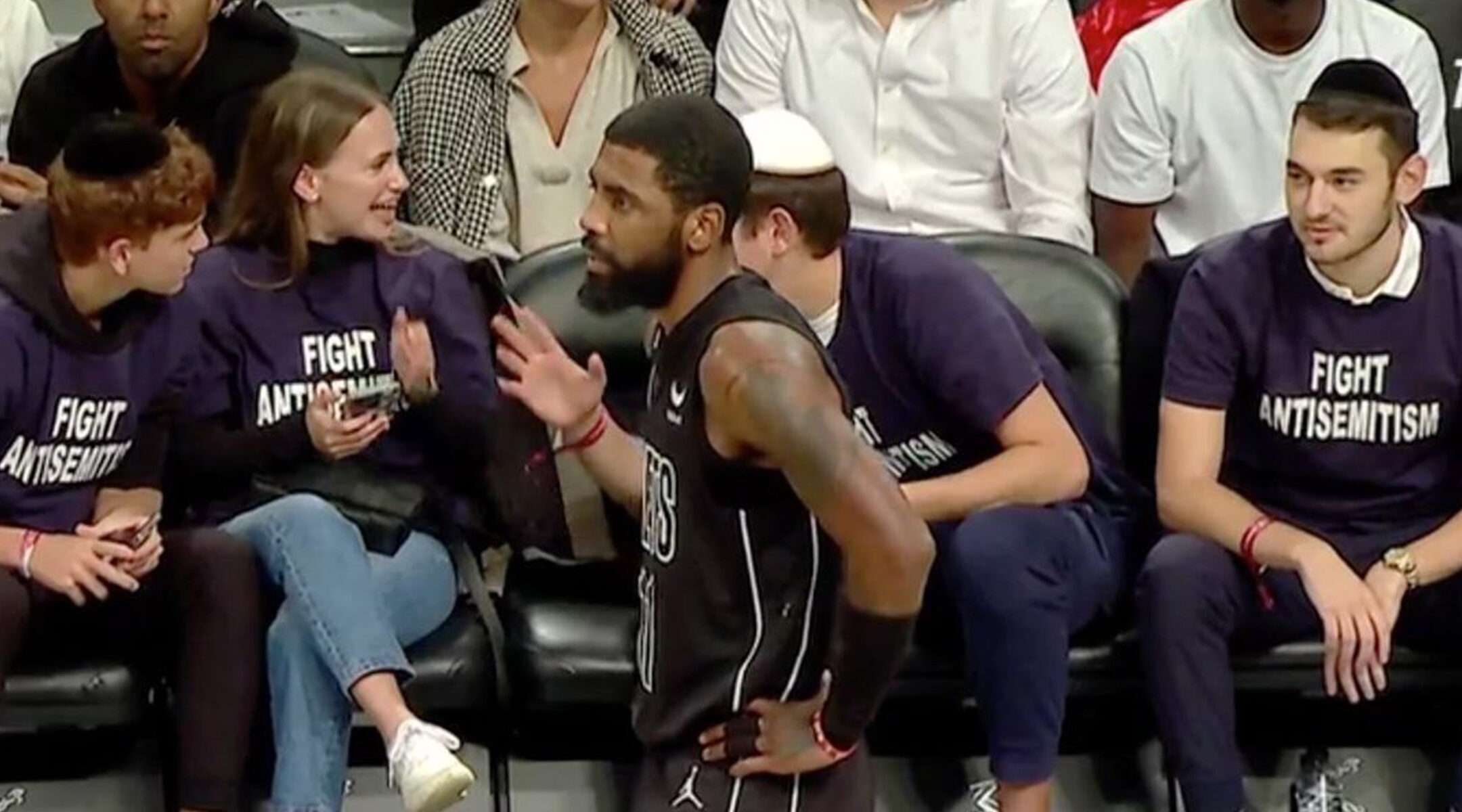 Outside the Barclays Center, meanwhile, Jewish fans said they were dismayed by Irving’s refusal to disavow the film or his actions, but said they weren’t ready to give up on the NBA team.

A season ticket holder who did not want to be named told the New York Jewish Week that she still wants to enjoy a basketball game.

“I can ignore what [Irving] says,” said the Manhattan resident, who has been a season ticket holder since the team was in New Jersey. “It’s a little awkward, because I know how he feels.”

Her friend chimed in: “Part of me doesn’t want to root for the Nets anymore.”

Last week, Irving had shared a link to “Hebrews to Negroes: Wake Up Black America,”  a film riddled with antisemitic tropes and the canard that Jews were largely responsible for the transatlantic slave trade. Irving’s Twitter account has 4.6 million followers.

After both Nets owner Joe Tsai and the Anti-Defamation League denounced Irving’s tweet, the star player doubled down on his views.

“I’m not going to stand down on anything I believe in,” Irving said. “I’m only going to get stronger because I’m not alone. I have a whole army around me.”

On Sunday, the tweet was deleted. Nets coach Steve Nash, before Monday night’s win over the Indiana Pacers, said it “certainly helps” that Irving deleted the post, but did not say whether disciplinary action has been considered for Irving,

The season ticket holder said she wants to see the team suspend Irving for his actions.

“He’s someone with a lot of influence, and a lot of young kids look up to him,” she said. “He doesn’t need to post things and say things in a certain way that can sway people in a bad direction.”

One of the people wearing the black T-shirts courtside was Mike Dube. Dube, who is Jewish, runs a sports training programs for kids and is a co-founder of the charity Sharing Seats, which provides disadvantaged kids the opportunity to attend sporting events and concerts. Dube told a cable channel SNY reporter that Irving greeted his group during a timeout and said that he appreciated them.

Another was Lindsay Haimm, a 23-year-old modern Orthodox Nets fan, who told the New York Jewish Week that the New York Post falsely reported that they were heckling Irving. She said the group instead had a positive conversation with the player.

“He really took note of us and what we were standing for,” Haimm said. “He said something like, ‘we are grateful for you guys,’ and thanked us.”

She said her father, who was at the game, but not sitting courtside, gave her and the others the idea to wear the shirts.

“We wanted to get people talking,” Haimm said.  “There wasn’t that much news about what Kyrie did, which was so unacceptable. This was an opportunity to stand up for the Jews and show that there should be zero tolerance for antisemitism in any regard.”

Haimm added that after the first quarter of the game, her phone “was blowing up.”“People were texting me things like ‘this is crazy,’” Haimm said. “It was so nice seeing all these Jewish influencers showing their support and spreading the word.”

Aaron Jungreis, another season ticket holder who was wearing a “Fight Antisemitism” shirt, told the New York Post that the Nets “should not keep a guy like that around.”

“A lot of people are going to cancel” their tickets, Jungreis said. “They have to discipline him some way.”

An Orthodox Jewish fan from Brooklyn who did not want to be named told the New York Jewish Week that Irving makes him not want to participate in the game because the basketball player now gives him “a disgusting feeling.”

“Why pay money to see this guy if he is sharing antisemitic remarks?” the fan asked. “But I’m not going to throw away a ticket. I want to see the Nets.”

The Jewish fan said he doesn’t take Irving’s actions personally because the player has “done some funny stuff in the past.” The 10-year NBA veteran has previously dabbled in conspiracy theories about the Kennedy assassination and COVID-19, sat out part of the 2021-2022 season because he declined to be vaccinated, and last year said he holds to the belief that Black people are the real Jews.

Kyrie Irving gets into a back-and-forth with a journalist over his Instagram post of a 90s Alex Jones clip about secret societies. pic.twitter.com/l540VTkzue

“His mind isn’t one hundred percent there,” the fan said. “He does some funny games — as we say in Yiddish, schtick. He doesn’t show up sometimes. It seems like he has more mental health issues than just attacking the Jewish people.”

Jane Carlin, who has been a Nets season ticket holder for eight years, told the New York Jewish Week that she used to be one of Irving’s biggest fans.“I thought he was misunderstood and we’d all figure it out in Brooklyn,” Carlin said, who is now considering boycotting the team.

Carlin said that there are lots of Orthodox Jewish fans at Barclays arena who now feel like they are “losing something that they love.”“When you look at racist owners who have been kicked out of the NBA, that was a big deal,” Carlin said. “When it happens to the Jews, it somehow isn’t as powerful.” Robert Sarver, the Jewish owner of the NBA’s Phoenix Suns and WNBA’s Phoenix Mercury, is selling his franchises after being suspended for racist remarks and other conduct earlier this year.

An Orthodox father with his son was rushing into the stadium, but told the New York Jewish Week that Irving should apologize, and “if not, he should leave the NBA.”

“I booked these tickets months ago,” the father said. “I don’t know if I would come see him if I knew about this.”

Meanwhile, Micah, a 21-year-old Jewish man from Brooklyn who was having a night out with his friends, said that what Irving put on Twitter was “pretty [messed] up,” although his language was stronger.

“I’m waiting for him to leave the team at this point,” Micah said. “I thought that we were living in a time that when people said antisemitic things, they were shut down.  This is not getting shut down as fast as some other things. It’s disappointing.”

Still, Micah said that he was not going to let one player deter him from going to enjoy a basketball game.

“This is my team,” Micah said. “It was my team before he was on the team. We can hope that things get a little better, but until then, stay close as Jews.”

Brooklyn is home to a large Orthodox Jewish community, whose members have complained in recent years of frequent unprovoked street attacks and other antisemitic incidents.