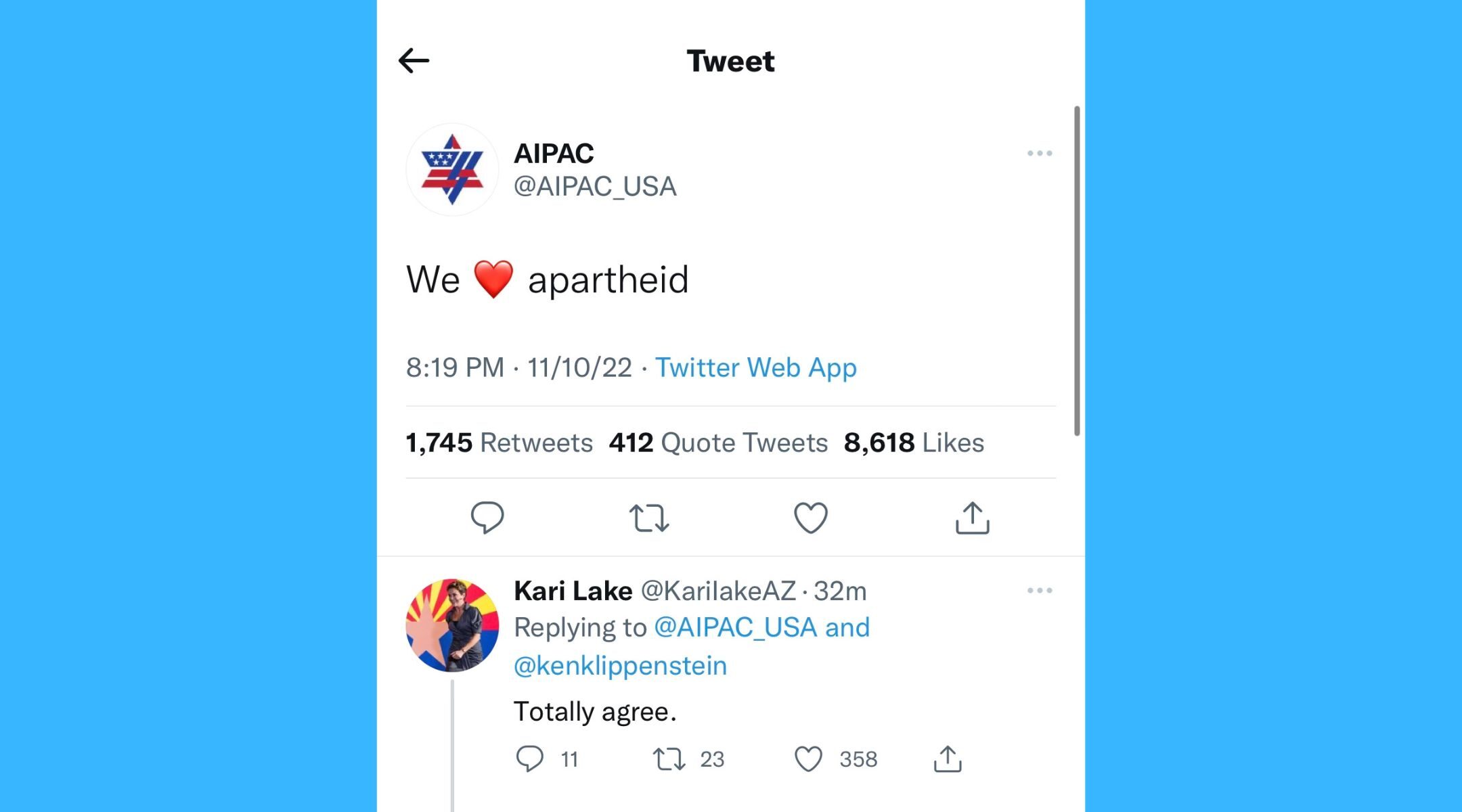 A tweet from an account impersonating AIPAC was online for hours Thursday night, in one of many signs of Twitter's chaos since its acquisition by Elon Musk. (Screenshot)
Advertisement

(JTA) — For a short time Thursday night, Twitter users could see a post that would confuse anyone plugged in to the world of Israel advocacy.

“We ❤️ apartheid,” tweeted an account with the handle AIPAC, the acronym for the American Israel Public Affairs Committee. The account’s profile picture was the same red-and-blue Jewish star that the organization has long used on the social media platform.

The message was shocking because AIPAC is a vociferous defender of Israel against criticism, including the argument that the country perpetuates an apartheid system through its treatment of Palestinians. But it was also fake: The group had fallen victim to a wave of spoofs, falsification and abuse unleashed by Elon Musk’s recent acquisition of Twitter.

Only by looking closely could a user see that the account belonged to “AIPAC_USA,” not “AIPAC,” where the group has long posted. The impersonating account was deleted but not before the tweet had been seen and amplified thousands of times. It even got engagement from accounts impersonating other prominent figures. “Totally agree,” responded @KariLakeAZ, a fake account purporting to belong to the far-right Republican candidate for governor who is lagging in Arizona’s vote count.

The spoof was one of countless instances of impersonation meant to provoke reactions or sow chaos that have unfolded since Musk paid $44 billion to buy the platform two weeks ago. He has swiftly made steep layoffs and abrupt changes to moderation and authentication rules, all while tweeting crass and controversial content himself. The turmoil has sent users, advertisers and employees packing, while opening the floodgates to bad actors on the site.

Musk has also continually tweeted out different sets of rules concerning impersonations on the platform; by Thursday, he said that “parody” accounts must include that word in their names.

A slew of top executives, including those responsible for privacy and legal compliance, have left the company in recent days, according to media reports. But until Thursday night, a top leader who had led efforts to keep hate speech off the platform, Head of Trust and Safety Yoel Roth, had remained in place and seemingly in Musk’s favor, tweeting explanations of his new boss’ decrees and assurances that the company was taking hate speech seriously. He even appeared alongside Musk in a meeting meant to placate panicked advertisers on Wednesday.

But at the same time as the fake AIPAC account’s “likes” mounted, Roth added a single word to his Twitter bio: “former.” Whether he quit amid the chaos or was pushed out is not clear, but his departure from the company was an especially worrying sign for those who have held out hope that the Musk-induced turmoil would ultimately recede.

Roth had been a polarizing figure at the company while also serving as the public face for its efforts to root out hate. A gay Jewish man who openly tweeted about his identity (he once tweeted that a DNA test revealed him to be “Extremely F—ing Jewish”) and his liberal views, he drew the wrath of Twitter’s right-wing critics. Right after the inauguration of Donald Trump, he tweeted that there were “ACTUAL NAZIS IN THE WHITE HOUSE.”

In his role, Roth led efforts to address surges of antisemitic harassment on Twitter. Last week, with bots and trolls surging again amid Musk’s takeover, he tweeted about efforts to remove them and said, “Twitter’s policies haven’t changed. Hateful conduct has no place here.” In his final tweet prior to his departure, he said efforts to suppress hateful content had been largely successful.

Some of Roth’s lighter tweets, which became less frequent in recent years as he became more of a public figure, include Jewish content. In 2017, he posted about a children’s book in Hebrew about a cat who sits on a rug and abides while other animals join it. Eventually it’s too much for the cat, who hisses at the other animals, scaring them away.

Roth’s departure means that Twitter has lost virtually all of the executives responsible for ensuring safety and security on the site. With the disorder unfolding in public view, parodists and provocateurs are seizing every opportunity to add malicious content to the platform.

Along with AIPAC, other Jewish groups have been ensnared in the trend. Also on Thursday night, a fake account impersonating the Anti-Defamation League posted a picture of Henry Ford, the famously antisemitic car manufacturer, and tweeted, “We’re so glad to be here. Elon Musk is the #HenryFord of our time. Innovation is a miracle!”

The tweet, which came from @ADL_Official, not the actual @ADL account, did not last long on the site. It was a reference to a real comment from ADL CEO Jonathan Greenblatt from just a month ago, when he praised Musk on TV as following in Ford’s tradition of innovation and said he was cautiously optimistic about Musk’s then-approaching ownership. Greenblatt apologized for his comments exalting Ford immediately and publicly lost confidence in Musk shortly afterwards.

Last week, with antisemitism spiking on the platform, the ADL urged advertisers to boycott it, and many are doing so.