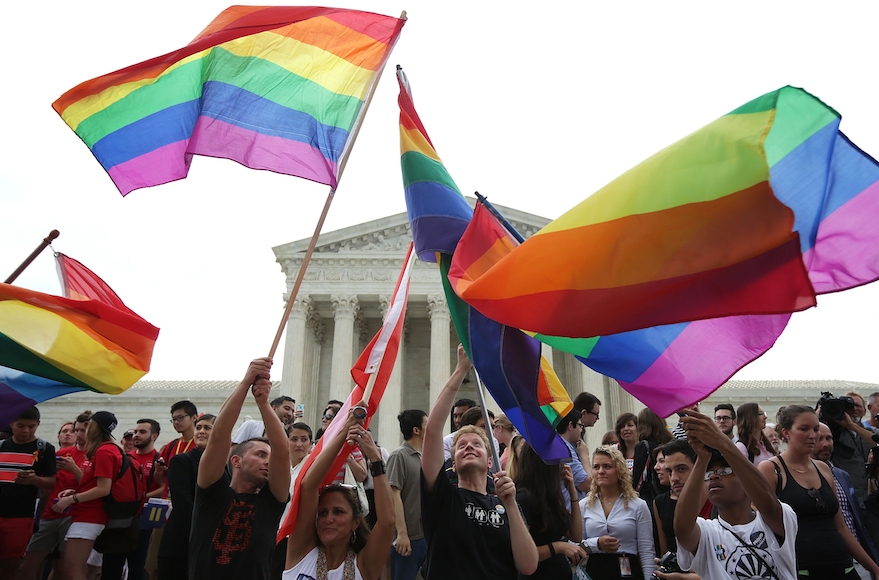 (JTA) — The Orthodox Union has endorsed religious liberty provisions added to the Respect for Marriage Act, marking the first time that the group has said it could support federal legislation enshrining the right to same-sex marriage.

When more than 100 Jewish groups endorsed the Respect for Marriage Act this summer, the OU, an umbrella group representing Modern Orthodox synagogues, was not among them. The group had previously sat on the sidelines as well when the U.S. Supreme Court weighed Obergefell v. Hodges in 2015, in which the court ruled that same-sex marriage was protected under the Constitution.

But this week, the OU said in a letter to senators working on the Respect for Marriage Act that enough religious freedom provisions had been added to the legislation that the group’s concerns were assuaged. The group worked with other religious groups, including the Mormon church, to lobby lawmakers to add the provisions.

The OU’s advocacy director, Nathan Diament, told the Jewish Telegraphic Agency that a spokesperson had erred by characterizing the OU’s position as “expressing support for the compromise bill” as a whole.

The OU still does not countenance same-sex marriage under Jewish law, its long-held view, and if the bill does not pass, Diament told JTA, that would be acceptable to the OU, too.

Still, the letter says that the group was convinced that Orthodox rabbis and communities would not be compelled to compromise on their religious beliefs if the bill becomes law, as it appears likely to do. Following the advocacy by the OU and other groups, a bipartisan group of senators sponsored an amendment to the bill that would enshrine protections for religious groups that do not accept same-sex marriage as a matter of doctrine.

“The leadership of the Orthodox Union … cannot endorse the main purpose of H.R.8404,” three OU executives wrote to the four senators. “However, we welcome the provisions added to this bill by your amendment in the nature of a substitute in the Senate that appropriately address religious liberty concerns (provisions that were absent in the version of the bill passed by the House of Representatives).”

The Respect for Marriage Act, which the Senate passed on Wednesday, aims to repeal a decades-old federal law that defines marriage as being between a man and a woman. Obergefell superseded that law, but earlier this year, when the Supreme Court overturned Roe v. Wade, Justice Clarence Thomas mentioned Obergefell as another decision that he believed should be reconsidered.

That spurred lawmakers to try to guarantee same-sex marriage rights through legislation. The U.S. House passed a version of the Respect for Marriage Act, sponsored by Jewish Democratic Rep. Jerry Nadler, in July. The Senate’s version, advanced this week, added an amendment that ensures that nonprofit religious groups will not have to provide services to celebrate same-sex marriages and also clarifies that polyamorous marriages are not subject to the law.

The Orthodox Union is not the only religious group to have previously opposed same-sex marriage rights to have said they can accept the new bill. The Church of Jesus Christ of Latter-Day Saints, known as the Mormon church, which spent millions of dollars to oppose a California same-sex marriage referendum in 2008, also endorsed the Right to Marriage Act with its new religious freedom provisions this week.

The bill comes at a complicated time for Modern Orthodoxy’s handling of LGBTQ issues. The denomination’s flagship educational institution, Yeshiva University, has appealed to the Supreme Court for the right to bar an LGBTQ student club, while still stressing to students that it wants LGBTQ students to feel comfortable as part of the community. The OU’s endorsement of the Respect for Marriage act walks the same tightrope.

“Judaism is emphatic in defining marriage as a relationship between a man and a woman. Our beliefs in this regard are unalterable. At the same time, Judaism teaches respect for others and we condemn discrimination against individuals,” Diament said in a statement associated with the OU’s letter to the senators who took up its advocacy. “Our hope is that the Respect for Marriage Act will expand civil rights for LGBT Americans while at the same time protecting principles of religious liberty and diversity which are central to our constitution.”

This story has been updated to reflect the OU’s clarification about its stance on the Respect for Marriage Act.