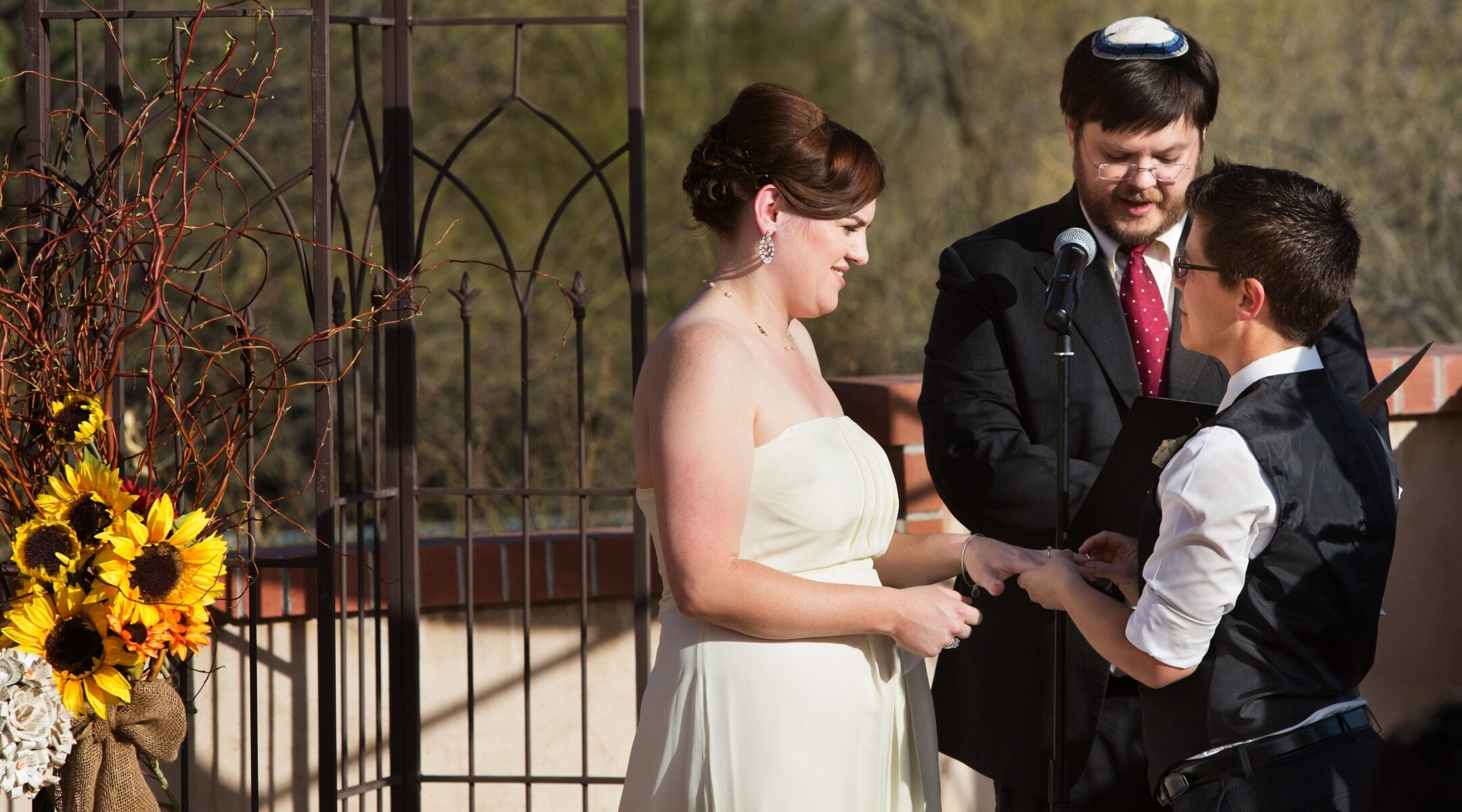 “The Respect for Marriage Act would ensure that all federal benefits are available to married couples regardless of the state in which they live,” said the statement released Wednesday and spearheaded by the Reform movement’s Religious Action Center and Keshet, a Jewish LGBTQ rights group. “Congress has a responsibility to pursue economic equity for all, regardless of geographical location, and include historically marginalized groups in this pursuit.”

Agudath Israel of America, a haredi Orthodox umbrella body, objected to the proposed law, which has passed the U.S. House of Representatives and is now under consideration in the Senate.

Democrats, led by Rep. Jerry Nadler, the Jewish New York Democrat who chairs the House Judiciary Committee, advanced the bill, which was drawn up the wake of the Supreme Court’s decision this summer to reverse its 1973 ruling guaranteeing abortion rights. Democrats fear the ruling could lead to the reversal of other rights, including the right to same sex marriage.

The lead author of the abortion rights reversal, Justice Samuel Alito, insisted that the decision would affect only abortion, but at least one of the five conservative justices joining in the decision, Clarence Thomas, said that the court should reverse the 2015 decision, Obergefell v Hodges, which guaranteed same sex marriage protections.

The new bill was at first seen as symbolic, but the strength of Republican support in the House — 47 Republicans voted in favor — surprised Democrats. It is now gaining traction in the Senate, where it is being spearheaded by a Republican, Susan Collins of Maine, and a Democrat, Tammy Baldwin of Wisconsin.

Collins is working to bring on board the 10 Republicans it would need to clear procedural hurdles, and she and Baldwin say they are open to changing the language to address Republican concerns, including extending protections to conservative religious institutions and denying them to polygamists.

That has led to a full court press from supporters and opponents of LGBTQ rights expansion. Joining the Reform movement and Keshet are the Conservative and Reconstructionist movements, the National Council of Jewish Women, Hadassah, the Anti-Defamation League, the Jewish Council for Public Affairs and a number of local Jewish federations and community relations councils. The American Jewish Committee said in response to a Jewish Telegraphic Agency query that it does not generally sign letters of “this nature” but “we support the goals articulated in this letter.”

In a tweet illustrated with the LGBTQ rainbow flag, the Jewish Federations of North America said the bill “embodies our values of ensuring the civil rights of all who wish to be married, a goal we have supported both in the United States and Israel.”

The statement from Jewish groups supporting the bill cited Jewish teaching. “Jewish tradition teaches that all people are created b’tzelem Elohim, in the Divine image, and are worthy of dignity and respect,” it said. “As organizations grounded in Jewish values and beliefs, we have an ethical and moral responsibility to fight for a society that ensures the humanity of all people.”

“Jewish law and values unequivocally reject homosexual conduct and same-sex marriage, both for Jews and for society at-large. Jewish law and values reject the notion that all people have a right to marry whomever they love, without restriction,” its statement said. “This is based neither in bigotry nor invidious discrimination. This is what our Torah teaches and what Jews have faithfully adhered to for millennia. We are deeply saddened that Jewish organizational supporters of RFMA have chosen to falsify the values they claim to represent.”

The Orthodox Union, the umbrella body for modern Orthodox Jews, declined a request for comment.